You'll find that the vast majority of Hamilton's men's models have second hands.  Typically the second hand is driven by the 4th wheel.  It's really rather simple... all you had to do is extend the 4th wheel's pivot through the main plate and put a second hand on it.

With the introduction of the 987 movement in 1927, the second hand was predominantly at the 6 position.  That was usually the case until the first sweep second hand movement was introduced with the 1940 Sentinel.  The Sentinel introduced the 987-S, which would also be used in WWII models with sweep second hands.   However, there was also one men's model that lacked a second hand - the 1936 Norfolk - it's one of a handful of men's models to use a ladies movement (the others were in the 1960s).

It wasn't until the 1960's that Hamiton's designers created a few models without a second hand again.  One of them was the 1962 Seaton.  It was produced through 1965.

The Seaton is a popular watch - probably because it is so unique looking.  It features a bold grey band around the rim of the dial with engraved golden hour markers.  The thin gold baton hands give the watch a classic 1960's elegant look.

You may be wondering what special movement Hamilton used to accomplish this feat?  I guess adding a second hard is harder than removing one - as all they had to do was trim the pivot on the 4th wheel so it wouldn't be as long and the problem was solved.  So you'll find a 12/0 sized 770 movement inside the Seaton and it's the same 770 movement used in many other models.  The only difference is the 4th wheel has a shortened pivot.

Although the Seaton was made for several years, you don't often see them for sale.  I recently had a fellow collector send me one that they purchased.  They got a pretty good deal on it - or so they thought.  It was described to me as one of those "thrill of victory / agony of defeat" things... which I think is pretty fitting.

Can you tell what's wrong with it? 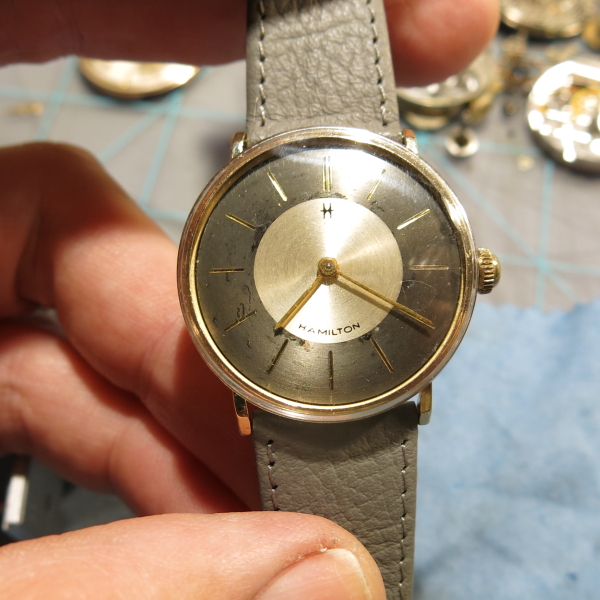 I had not seen a Seaton in the flesh before so I wasn't quite sure at first either.  The issue is it's missing it's bezel, or a ring that snaps onto the case.  It should have a much thicker gold band going around the outside perimeter.  Check out the catalog image for comparison.

This is the same issue I had when I purchased a 1964 Pan Europ... it looked great, until I realized what was wrong with it.

Live and learn, I guess.  It's a shame though.  I wonder what happened to it?  Maybe it popped off and they didn't know it could be popped back on.

Anywho - my friend suggested I glue the crystal down over the top after I finished overhauling the movement.  From the side it looks like this would be a decent solution, as the crystal covers the ledge that the bezel would snap on to and aligns flush to the side of the case. 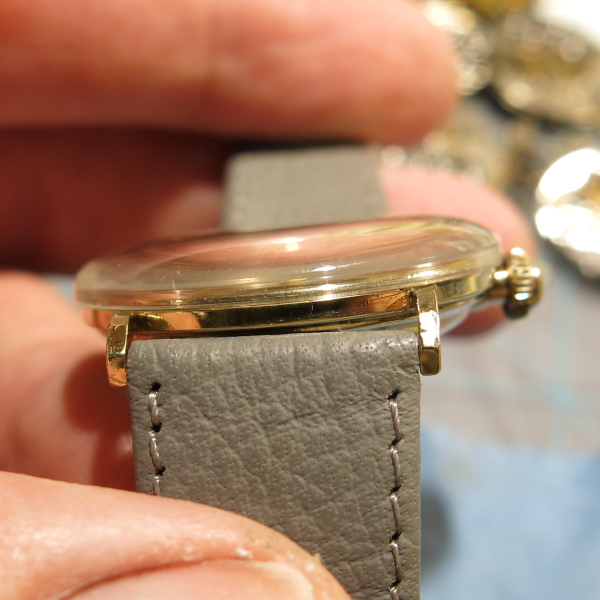 There's a problem with the idea of gluing the crystal on though.  First, the Seaton is a "front loader" so you have to open it from the front to get at the movement.  Second, the crystal actually holds the dial in place so with out the crystal inside the case there is nothing to secure the movement.

In the shot below you can see how the case is essentially an empty pie pan with a tube for the two-piece stem. 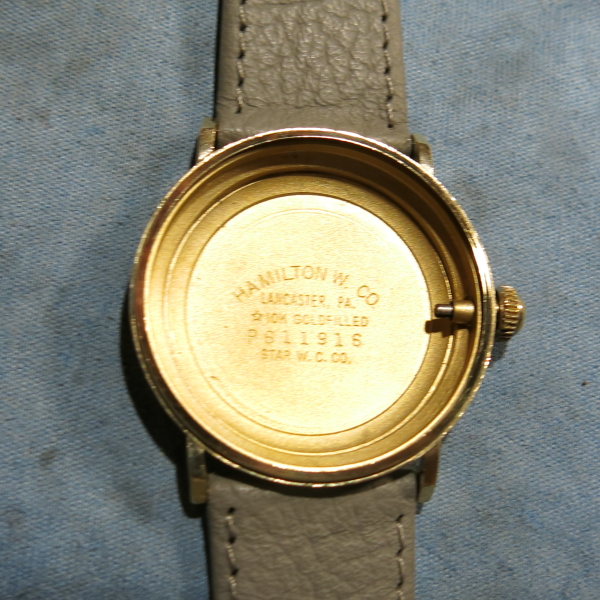 The 770 movement sits in a ring that fits snugly into the pie-pan.  This movement is rather dirty so a trip to the spa was a good idea. 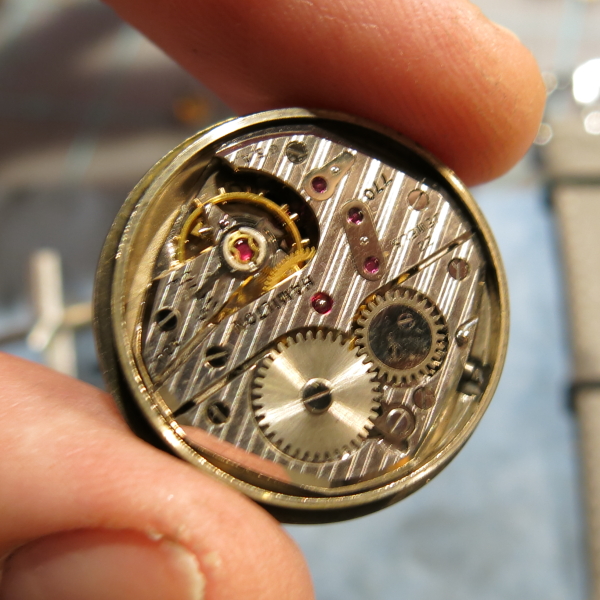 You can't really tell when its installed but the crown (on the right , below) that came with the watch is damaged and split.  I found a replacement (on the left) but I had to search hard to find one.  The stem tube on the Seaton is surprising large... almost 3mm.  None of my usual water-proof tap 10 crowns would fit over so large a tube, which is likely why the crown on the watch was used - it's the only thing a pat watchmaker had that would fit.  I wouldn't be surprised if the Seaton takes a special crown with gaskets on the post that goes into the tube, as opposed to inside the crown body to seal the outside of the tube.  What I have will work for now, but it may be too large if a bezel is someday located. 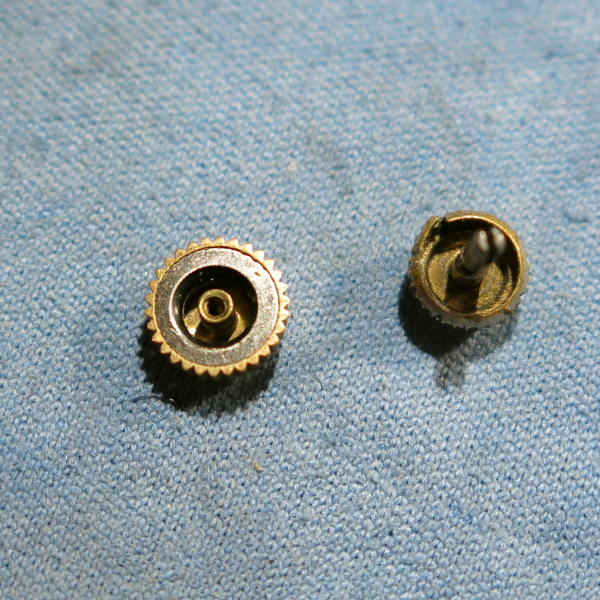 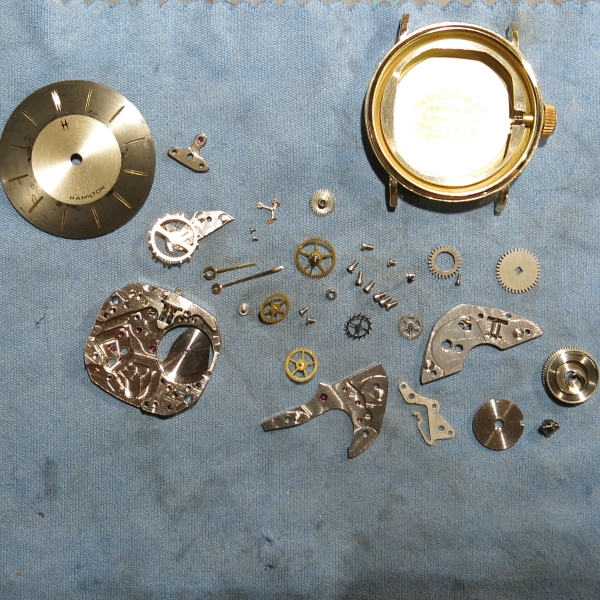 If you have a good eye for detail, you might notice that I installed a different stem in the movement.  I did that to help me wind the watch.  It's running nicely and sitting on my timer. 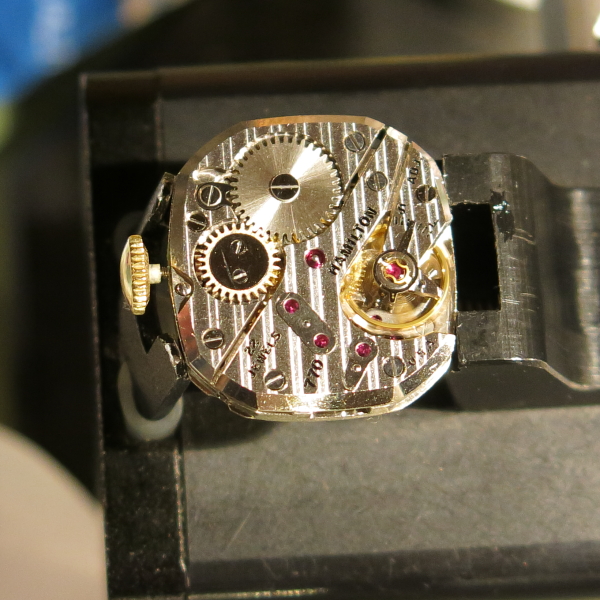 The movement was running a little slow and had a beat error of 5.7ms.  I realized I neglected to take a picture after I downloaded the photos.  5.7ms was too high to let slide so I removed the balance and adjusted the hairspring collet.  As you can see below, I nailed the beat error.  I'd like to say I'm that good, but it was pretty much luck, as it's done by eyeballing the position of the impulse jewel relative to the pallet fork.  I'll take all the luck I can get though, adjusting the beat error on this movement can prove perilous. 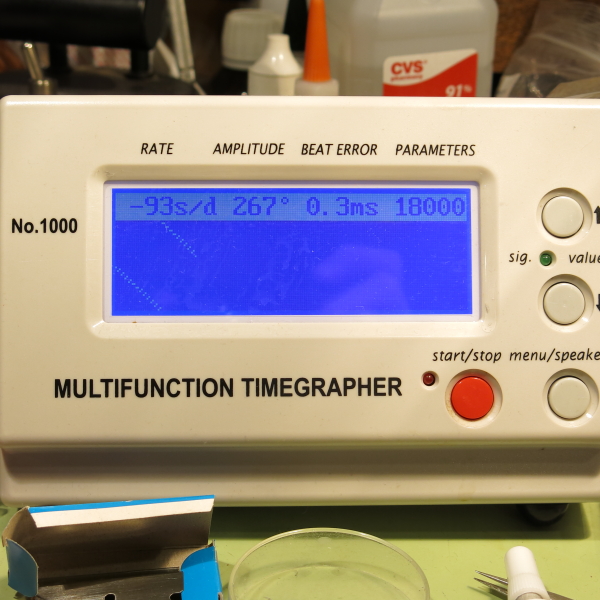 It doesn't take much of an adjustment to the regulator to speed the watch up.  You can see the effects of my adjustment as the two lines approach horizontal.  Now the watch is running "spot on", as they say. 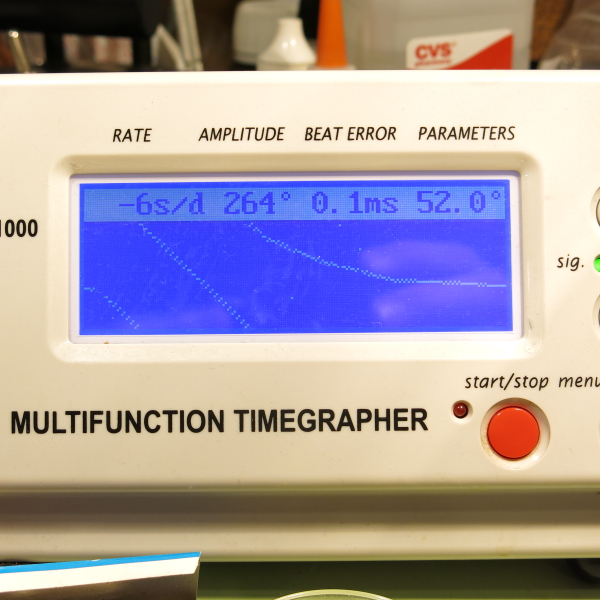 Since the watch doesn't have a sweep second hand, a low profile PK style crystal should do the trick nicely.  I don't think the Seaton had a reflector ring.  If that was the case I would have chosen an ET style crystal with a gold ring.  But the PK should do just fine and 28.2mm will give it a good, snug fit. 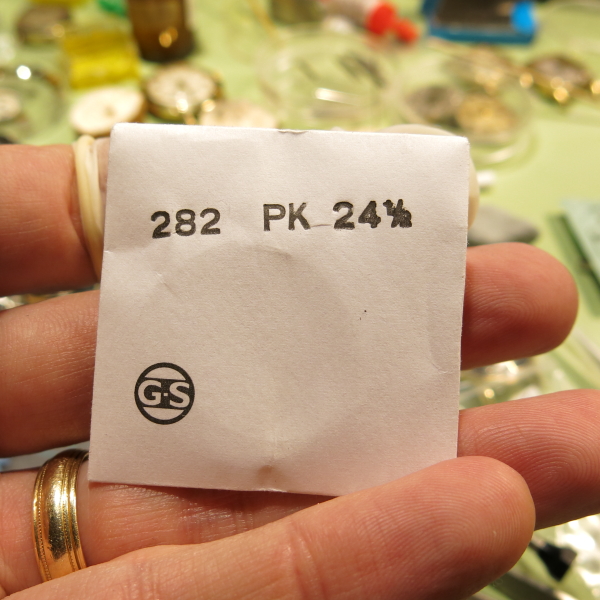 Here's the finished project with it's grey strap and a proper fitting crystal.  I don't think you'd realize the watch was missing an important design element (the bezel ring) if hadn't already told you. 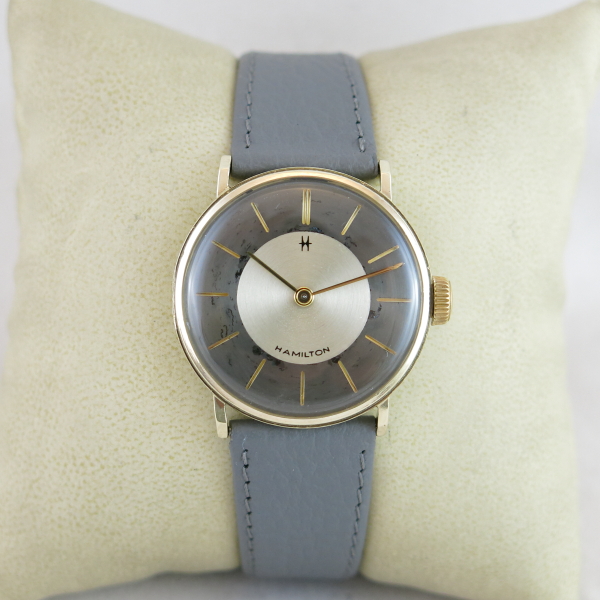 I think it's a pretty sharp looking watch as is.  What do you think? 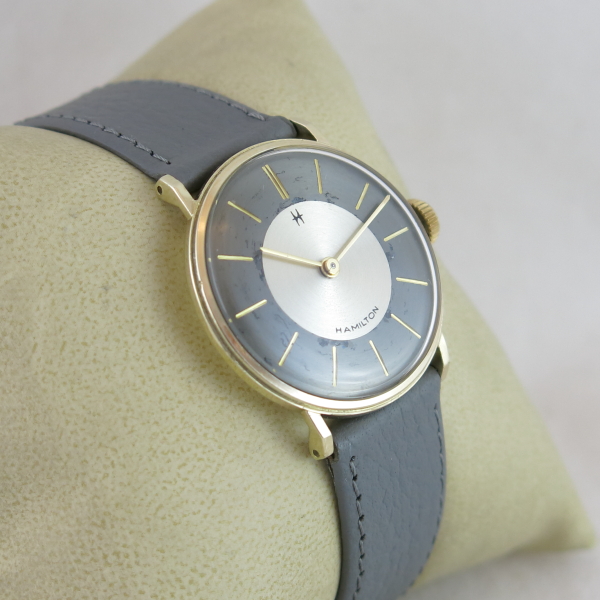