Some of the most popular Hamilton models are the Electric asymmetric models like the Ventura, Pacer, etc.  There are also quite a few mechanical models as well - and they are equally popular, perhaps even more so, because they are much easier to service.  Very few watchmakers will work on the Electric movements, unfortunately.

One of the mechanical asymmetric models is the 1962 Blade.  It was produced through 1969. Initially it came only in a yellow gold filled case.

In 1963, the Blade came in both yellow or white gold filled.  1963 also offered the Lord Lancaster C, which was identical to the white Blade with the exception of diamonds on the dial, where the Blade had gold markers.

What makes the Blade an asymmetric model is the lugs are different thicknesses and the case is thicker on the left side than the right.  Even though the watch is basically rectangular, it looks somewhat skewed.  I don't know if it's an optical illusion, or what, but the crystal stretches out to the right just enough to make things look unbalanced.

The Blade was outfitted with Hamilton's 22 jewel 12/0 sized movement, the 770 and has a radially finished dial with applied hour markers at 12, 3, 6 and 9.  The Hamilton logo is also offset at the 5 position, giving the watch a nontraditional, futuristic look.  However, the H logo is still centered under the 12... I guess the Hamilton executives told the designers, "Let's not get too crazy".

I've overhauled Blades before but I was surprised I never put one on the blog.  I was recently given another opportunity so I'm happy to show one to you now.

As received, it was in very nice shape but not running very well. 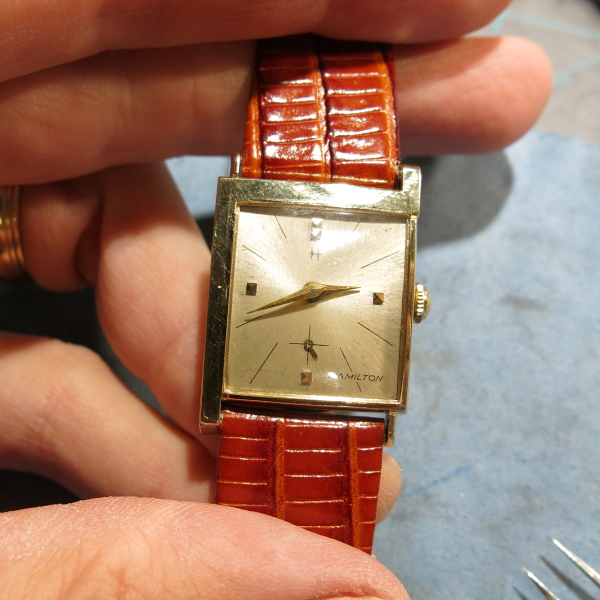 Blades tend to sell for "good money" and usually well into the realm of solid gold models - which is uncommon for gold filled models. 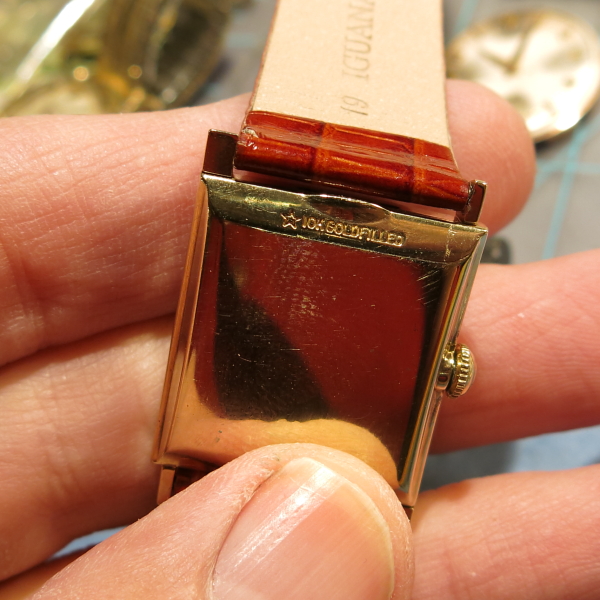 This movement appears to be in good shape but you can tell it's a little dirty.  There was a lot of gunk under the ratchet wheel (the large silver wheel).  That was probably robbing the movement of a lot of power, but a little dirt here and there will add up to a big problem eventually. 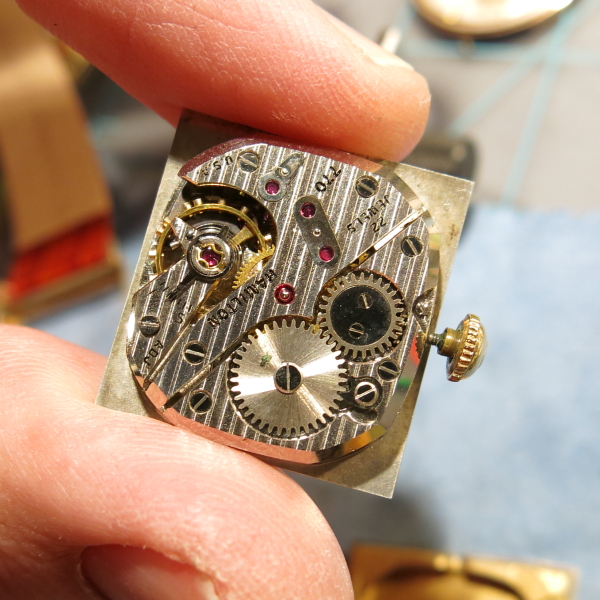 Everything is completely disassembled in order to be thoroughly cleaned.  There are some watch cleaners out there that only partially disassemble movements as part of their overhaul process.  I suppose that's like taking your car through a drive through car wash... it's sort of clean but not really as clean as doing it the old fashioned way.  Anyway - this movement is ready to be put back together with three different kinds of fresh lubricants. 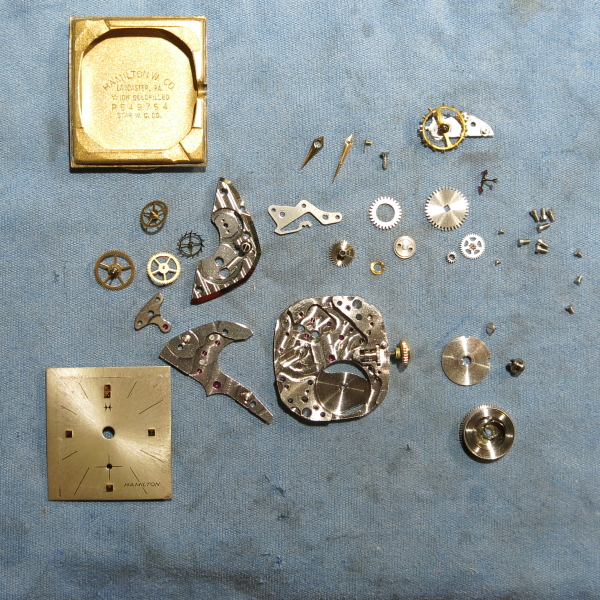 The movement is now ticking away briskly - that's a good sign. 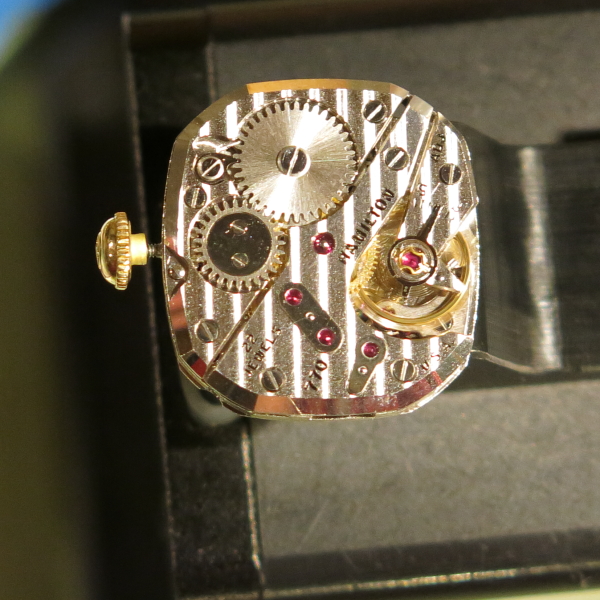 According to the timer, the watch is running about a minute and a half fast with good amplitude and an acceptable beat error.  A slight adjustment to the regulator is all that is needed to bring the time keeping inline. 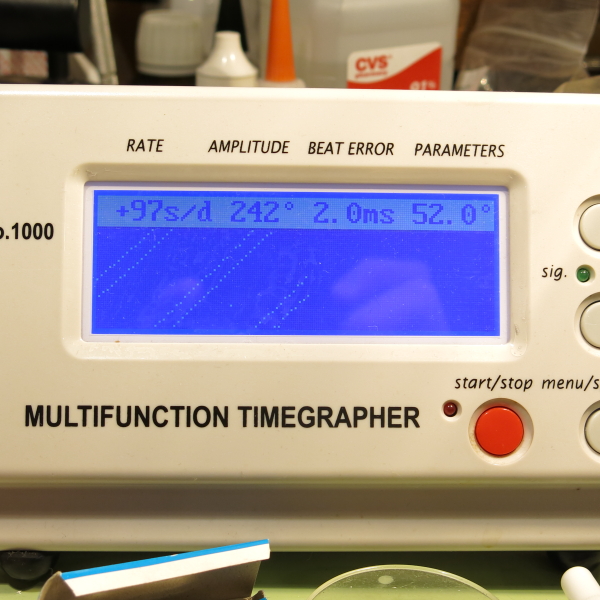 I slowed it down a little too much but a final tweak got the two lines to approach horizontal.  I'll leave it like this for now. 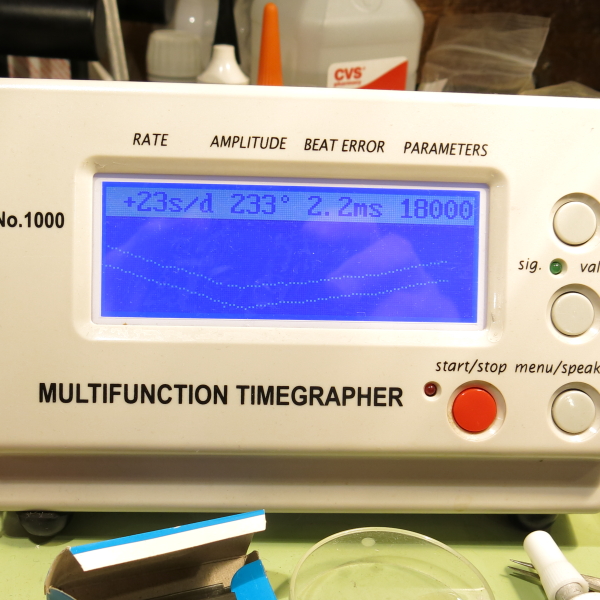 The finished watch looks just like it did when I started but now it runs as nicely as it looks.  It's ready for some more wrist time. 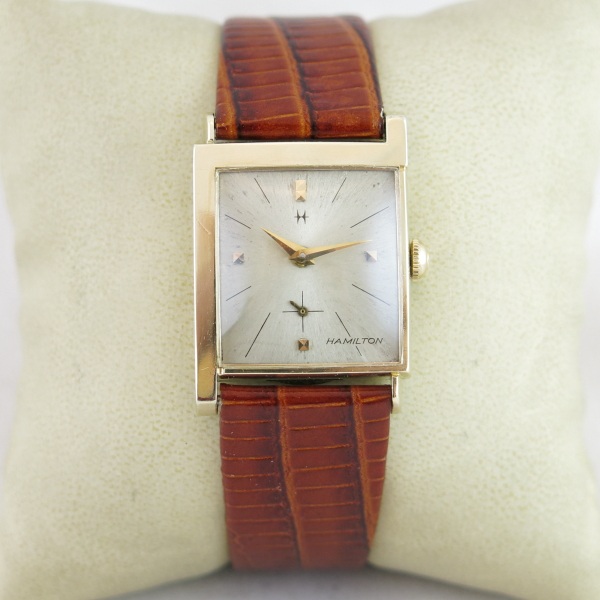