The first Thinline model was actually the Thinline II from 1958.  That's a bit odd, don't you think?  What happened to the Thinline?  Apparently Hamilton wasn't sure that the work was ready for Thinlines, as the Thinline II only stuck around for a single year. 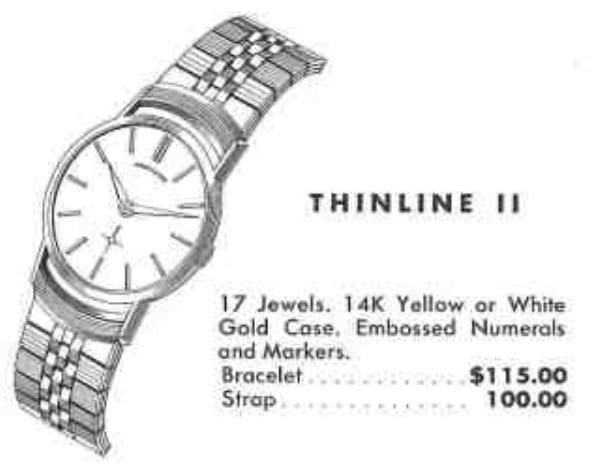 The Thinline 4000 also came with two dial options.   One of them looks a lot like the Thinline II's dial.   However, the Thinline 4000 is noteworthy because it has a very unique, arrow-shaped hour hand.   I don't think I've ever seen the all-numeral dialed version so I don't know if it also has the same hands. 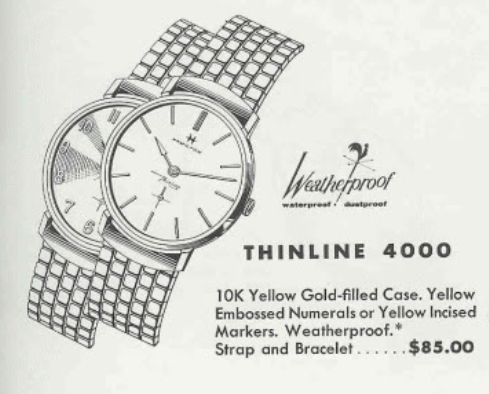 The Thinline 4000 didn't stick around for long.  By 1961 the catalog said it was "sold out".  That sort of begs the question, if it was that popular why not make more or continue the model? 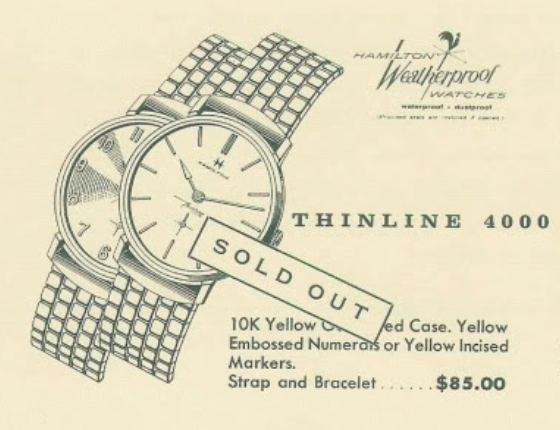 The Thinline 4000 isn't ultra-rare but it tends to be popular with collectors since the hour hand is so unusual.

I recently landed a Thinline 4000 project watch and it has a few issues.  First, the second hand was installed too close to the dial at some point and it rubbed a circular mark on the dial.  Someone was a little rough getting the hands off in the past and dented the dial.  Also, there's some crackling by the 5 hour mark, probably related to the dial foot screw being under it.  Finally, the lugs have groves worn into them from a past bracelet.  Still, it's not a complete disaster and it is almost 60 years old after all. 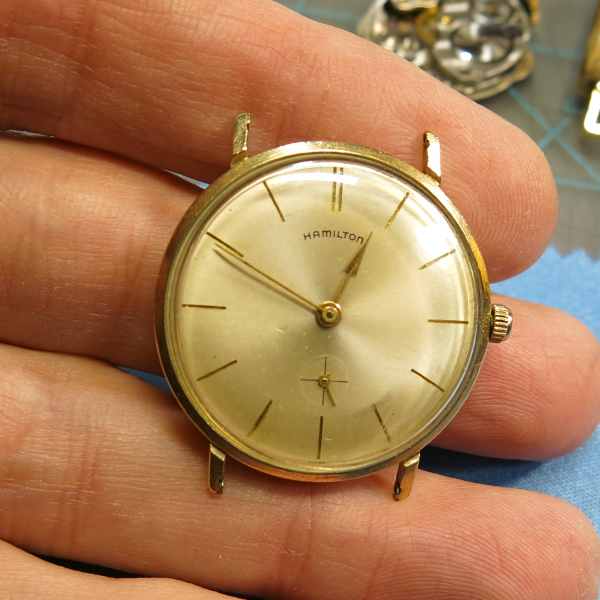 It's clear from looking at the back that this is a one-piece case that opens through the crystal. 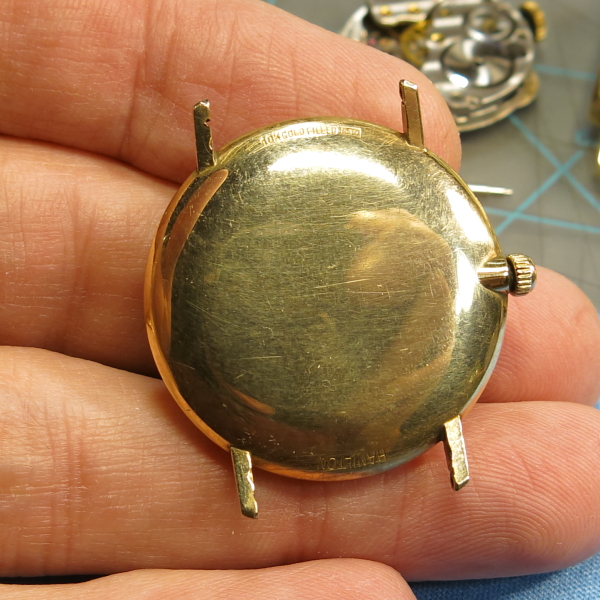 With the crystal out of the way you can see the dial a little better.  It looks a little wavier in the photo below than it does in real life. 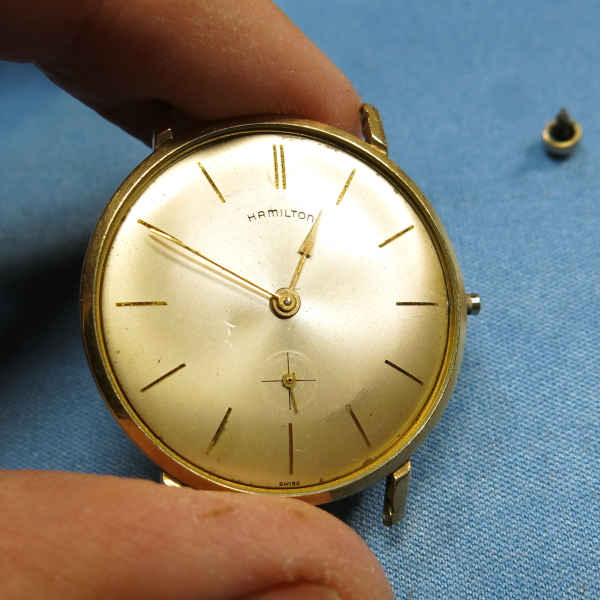 This photo is a little blurry but the movement is a 17 jewel 676 grade. 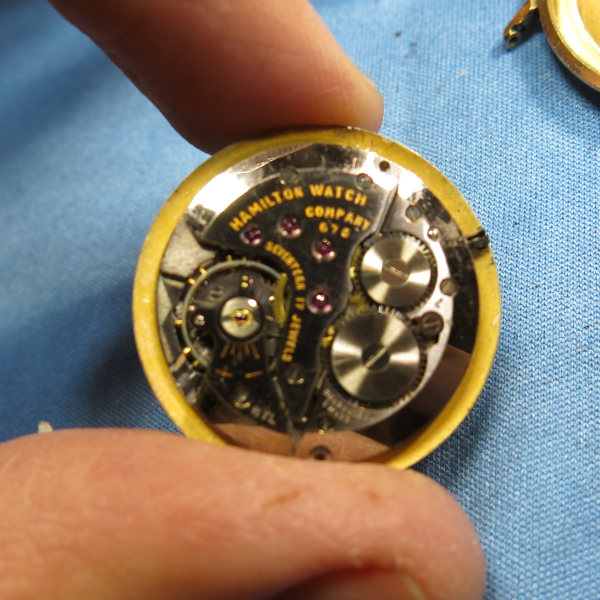 This watch has been through the hands of many previous watchmakers.  There are about a dozen different marks inside the case back. 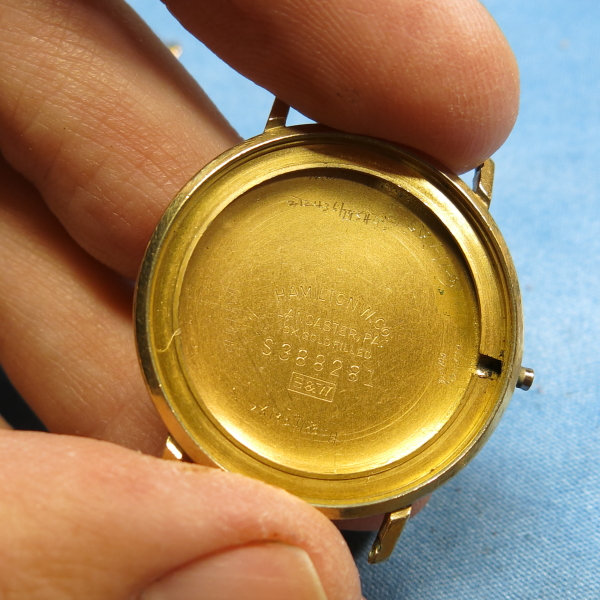 The main plate is stamped 4201 and was made by Aurore, one of the many watch companies owned by ESA (including ETA and others).  I wouldn't be surprised if the Hamilton relationship with Buren was the reason this model was short-lived.  Most Thinline models used a Buren movement starting in 1962. 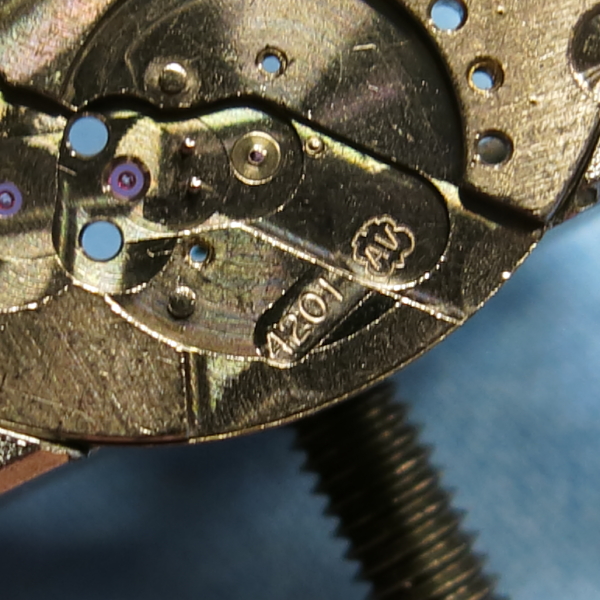 Everything gets taken apart and cleaned.  The hardest part about taking disassembling the movement is the balance jewels are incredibly small - about half the size of the typical shock jewels I encounter.  You can barely see them in the photo below and they are very easy to lose. 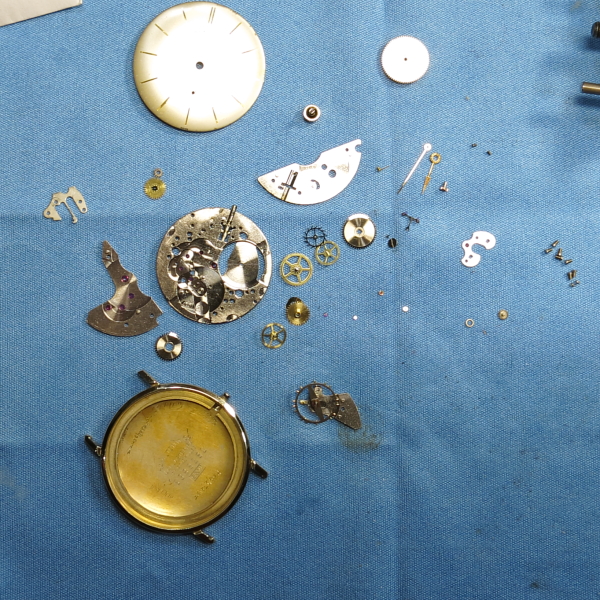 This 676 just doesn't want to be photographed but it is running with good motion.  Let's see what the timer says. 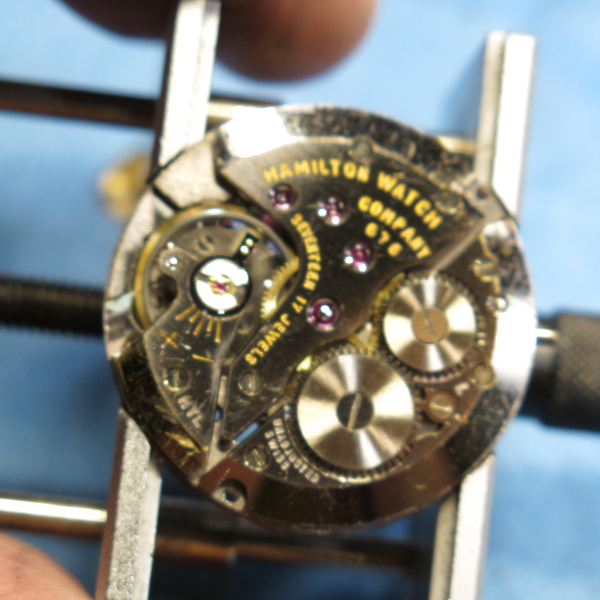 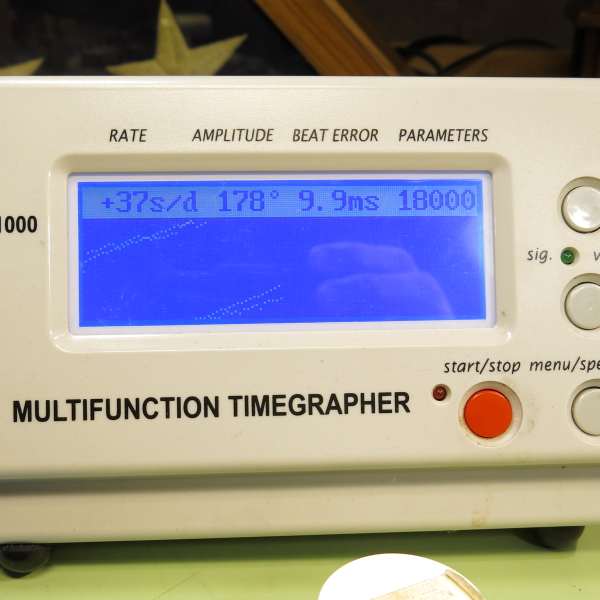 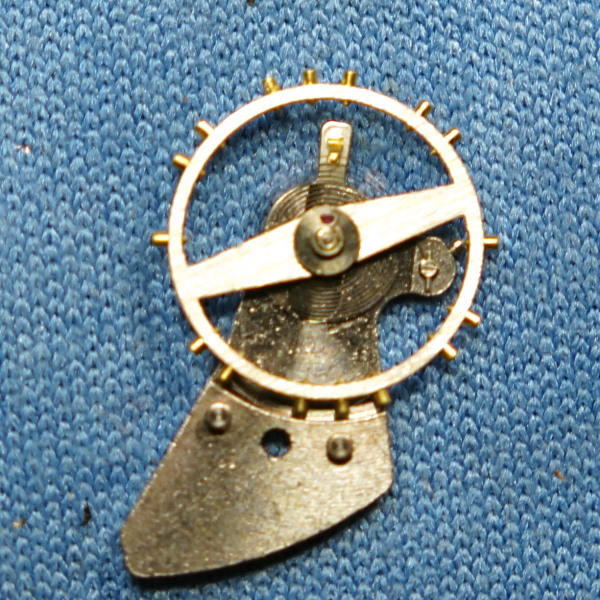 Here's another shot of the regulator with the hairspring now freed.  At this point I can lift the balance away from the balance cock. 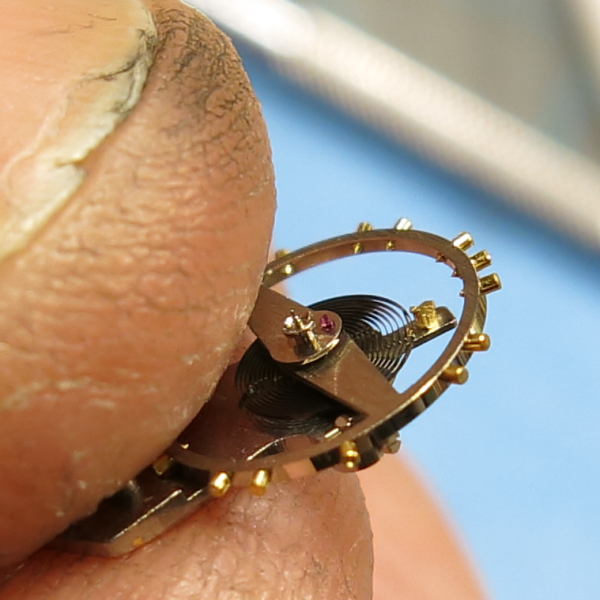 On my first attempt to adjust the beat error I must have moved the hairspring collet the wrong direction and made it worse.  Now I have to try again and go the other way. 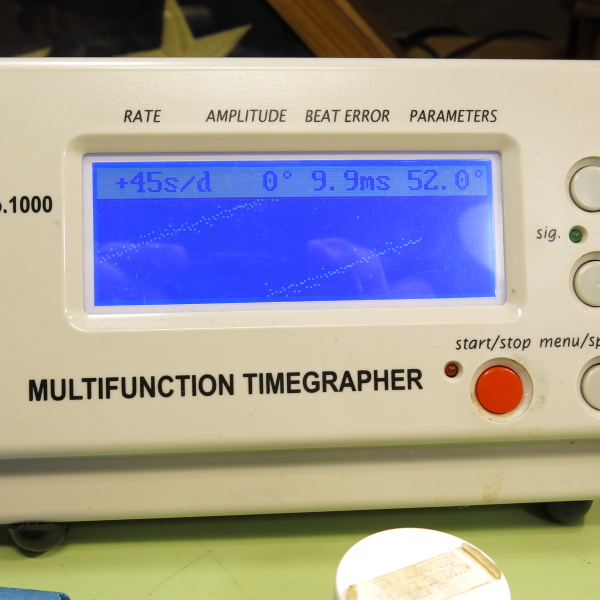 Getting warmer, but I still have a long way to go. 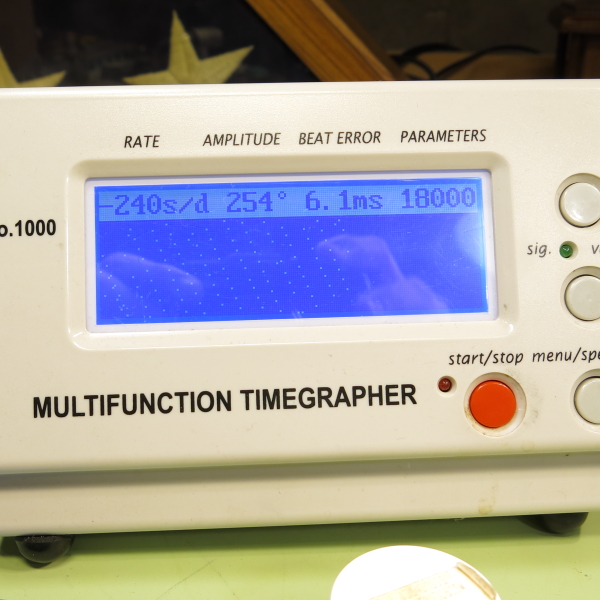 My third attempt is a bit better but maybe the 4th try will be the charm. 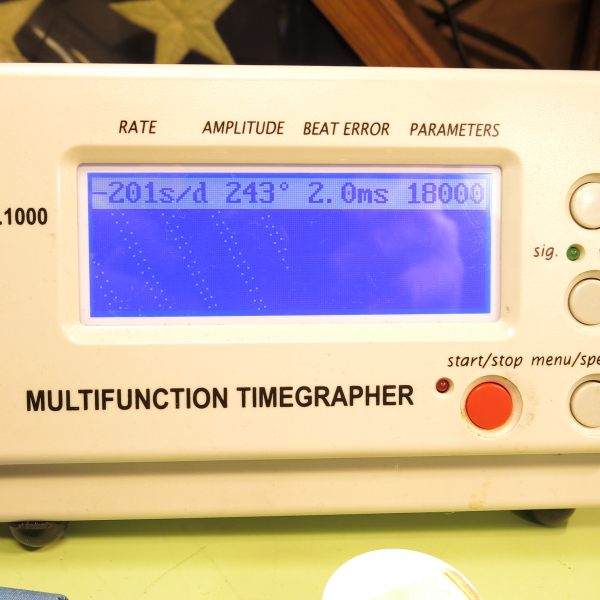 Ah, that's much better.  Just a tiny tweak to the regulator index to speed the watch up a smidgen more and I'll call it a day. 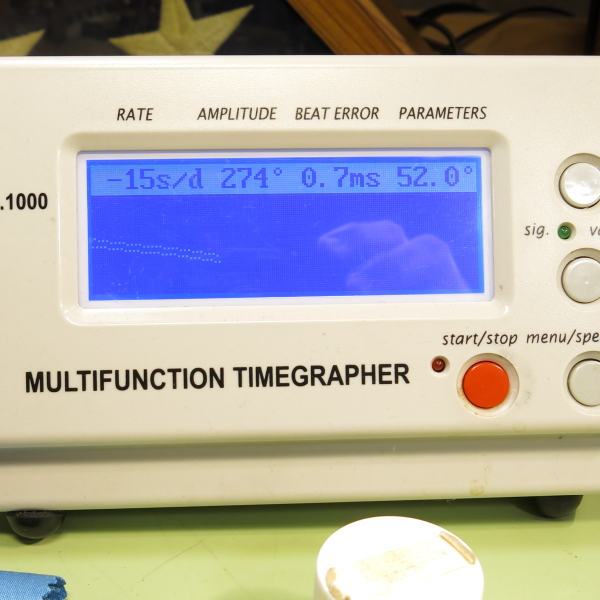 A fresh crystal will be a nice addition.  Since this watch is so "thin" I will use a PK-style, low profile crystal in 30.4mm. 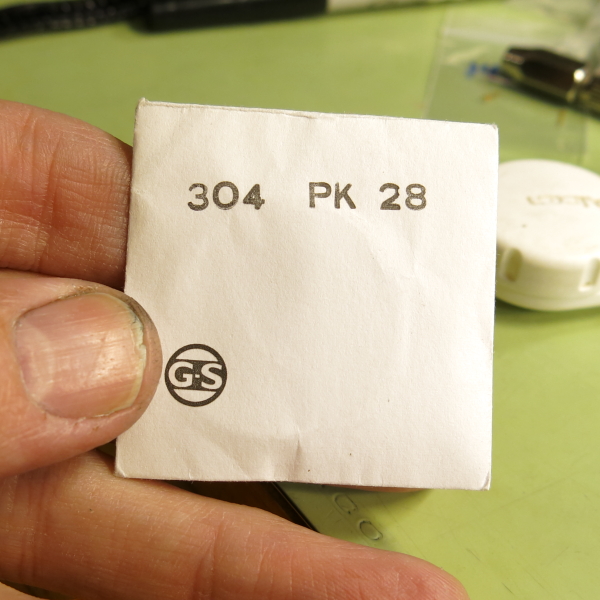 You can see below why this model is called a Thinline. An unpadded alligator strap is a perfect accent for such a thin watch.  With a fresh crystal, the dial doesn't actually look too bad.  Although there's not much I can do about the dent and the crackled finish at the 5 hour position. 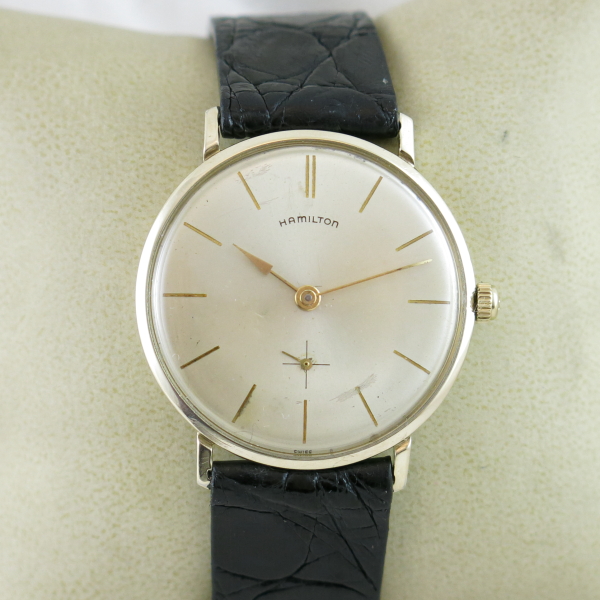 Still, for such an uncommon model this watch is a definite keeper until a better example can be found. 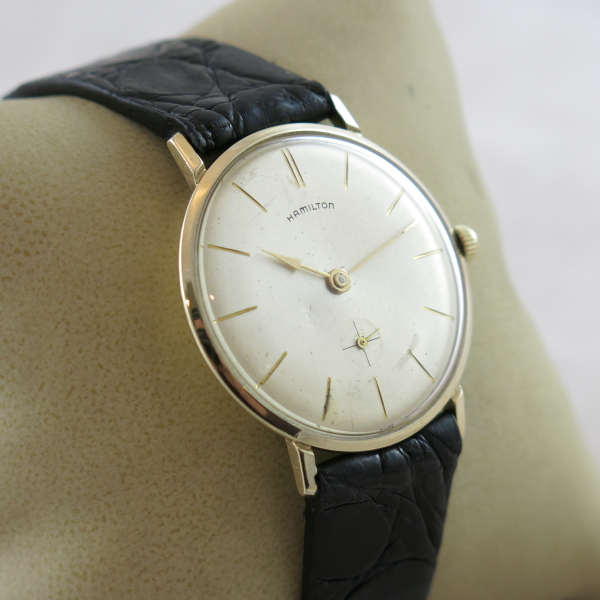