As I close in on the last 400 or so models I haven't documented yet, I am going to have a harder and harder time of finding them.  Some I will never find, as there are only a couple known examples of the rarest models.  Others are not quite as scarce but will still be tough to find (and afford).

I did recently land an ultra-rare watch.  It's a 1962 Sherwood T.  The Sherwood series from the early 1960's was little more than a set of prototypes as Hamilton explored the potential of using exotic wood veneers for dials.  The Sherwood T was only available for a single year.  I have never seen another one for sale so I took the plunge when I saw my project watch listed for sale. 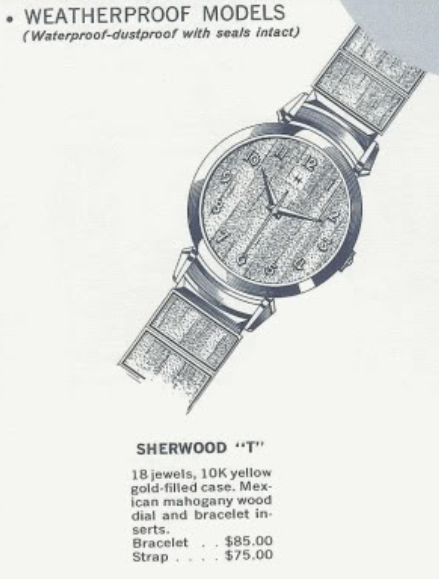 If the Sherwood T looks familiar it's probably because it shares the case and overall design with the Rodney - which is a very common but popular model from the 1950's and '60s.

The Sherwood T is powered by a Lancaster-made 18 jewel 735 movement.  The dial features solid gold numerals applied to Mexican mahogany wood.  The case is 10K yellow gold filled.  You could buy it on a strap or on a bracelet with matching wood inserts.

My project watch came with it's original box, which is always a cool find.  The Speidel bracelet is not original and will have to go. 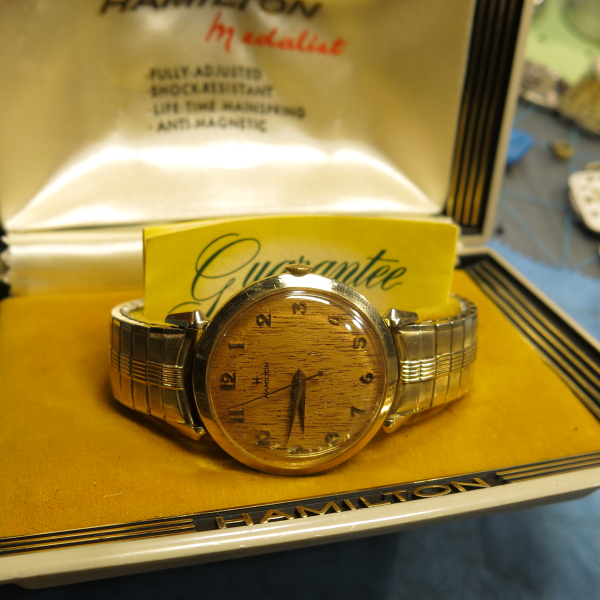 Although my photo is a little blurry, you can tell the watch is overdue for a good cleaning.  The dial appears to be in good shape.  Hamilton found that wood dials were very problematic, so the model line was short lived. 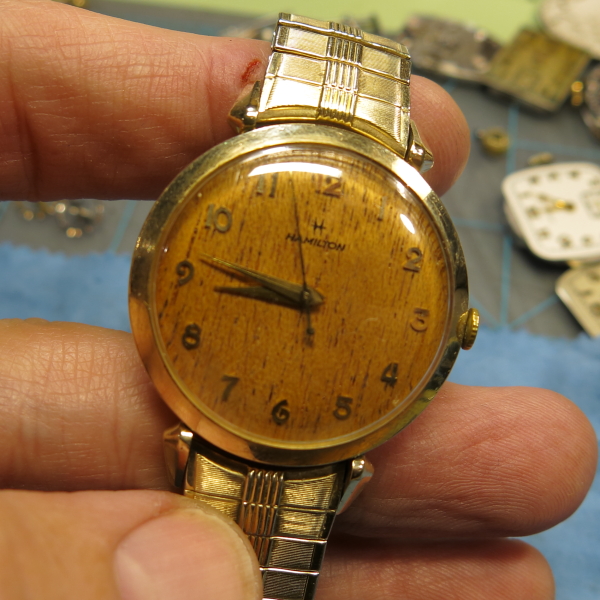 From the back, this watch looks exactly like a Rodney. 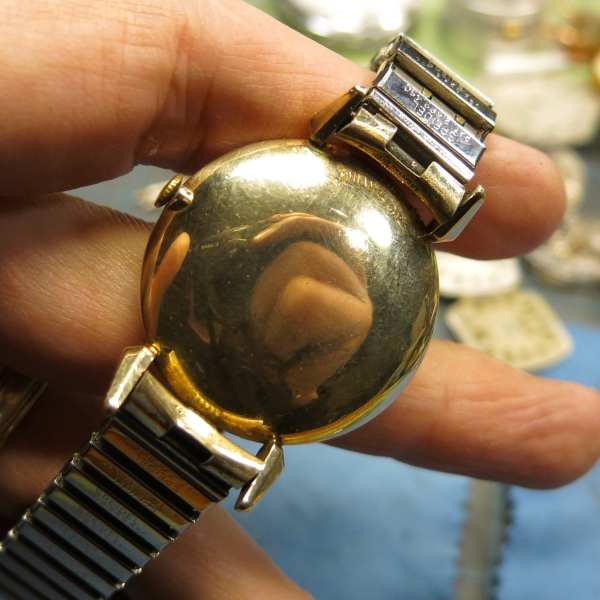 The 735 movement is a shock-jeweled version of the 748 movement introduced in the late 1940s. 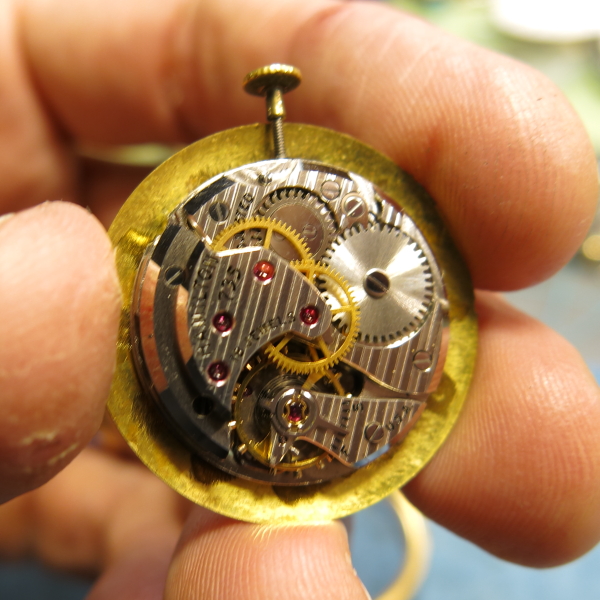 This close up of the dial shows that it's in remarkably good shape - which is great because I doubt it can be refinished. 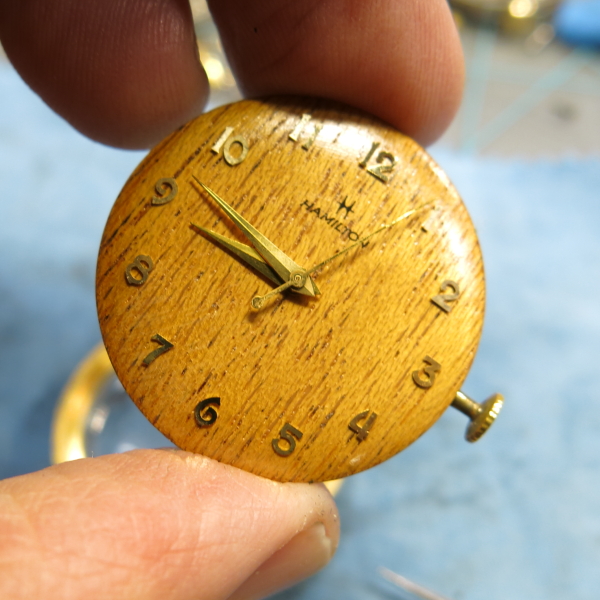 Everything gets disassembled and thoroughly cleaned. 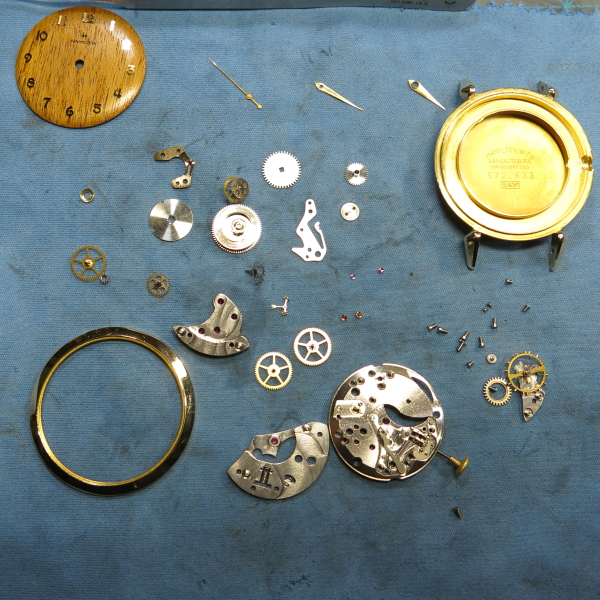 Oddly, most of the Rodneys I have restored (and it's been about a dozen) have all used 30.6mm crystals.  This bezel requires a 30.0mm crystal. 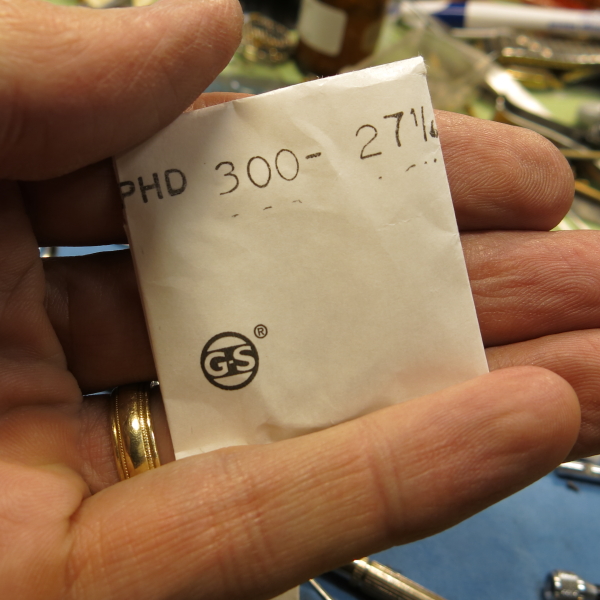 The 8/0 748, 735 or 736 is probably the hardest manual winding movement to reassemble.  It requires a light touch, lots of patience and, usually, a few choice cuss words. 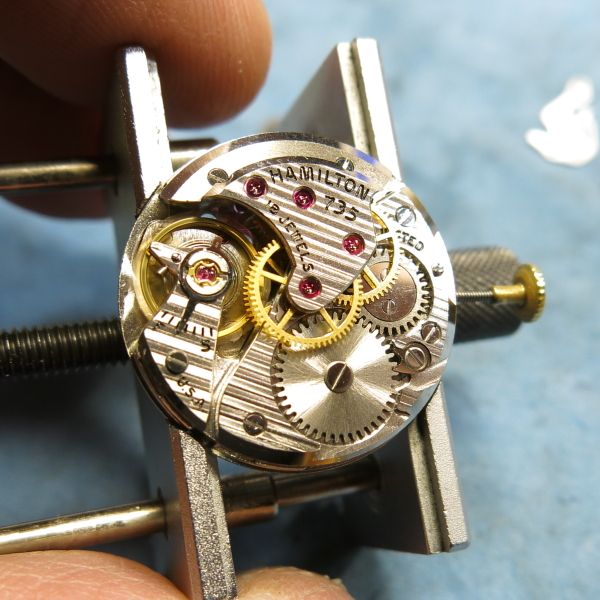 I might speed it up a smidgen but I'll leave the bear error where it is.  As long as it's under 3ms I don't tend to adjust it - as it's a good way to goof up a working balance. 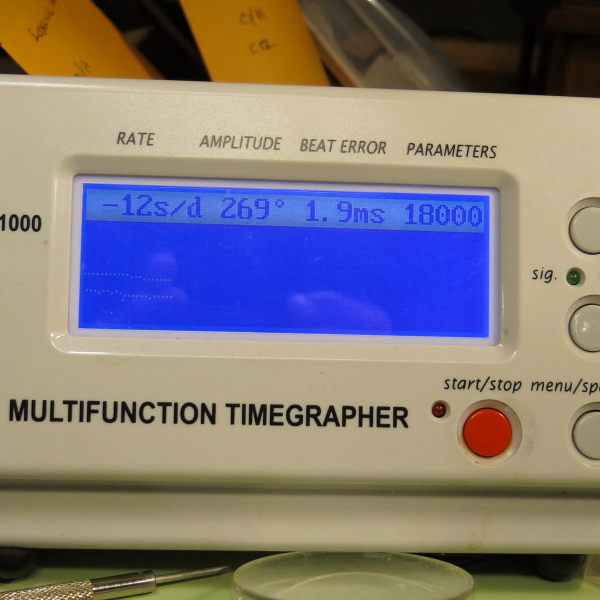 Although the case is in great shape, the crown on this watch is very worn and very hard to wind. 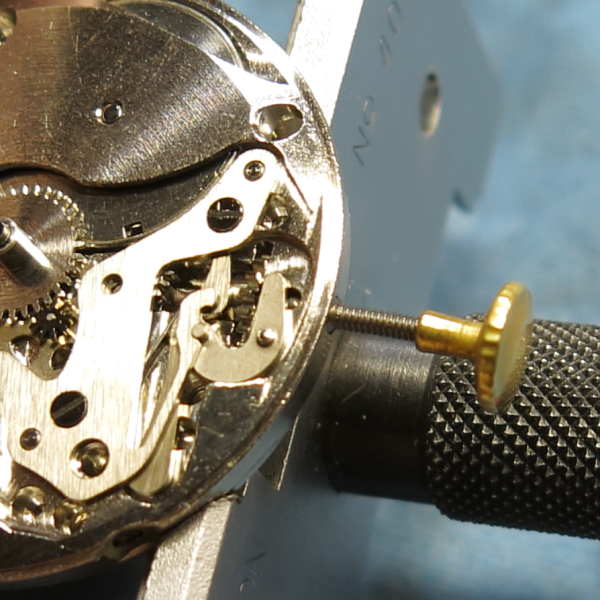 I happen to have a perfect genuine Hamilton replacement. 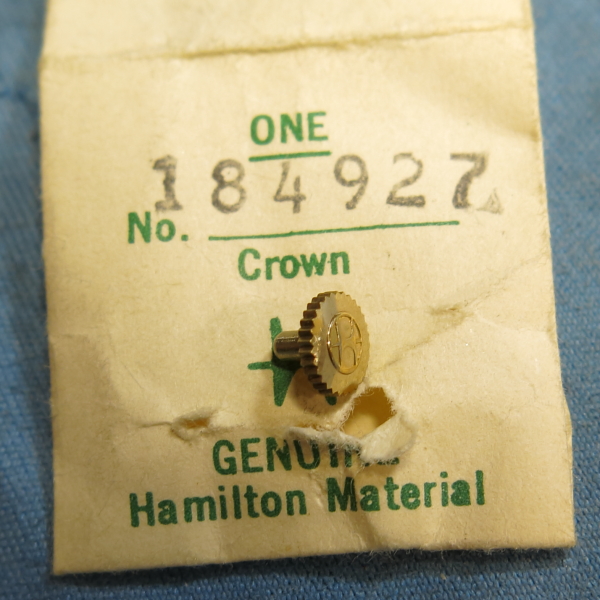 You should never wind your watch with it on your wrist.  Take it off to wind it.  When you wind it on your wrist you will apply uneven pressure and that can bend the stem like in the shot below.  The stem on top came from my project watch.  Notice it's bent.  So I have to replace the stem in order to install the new crown. 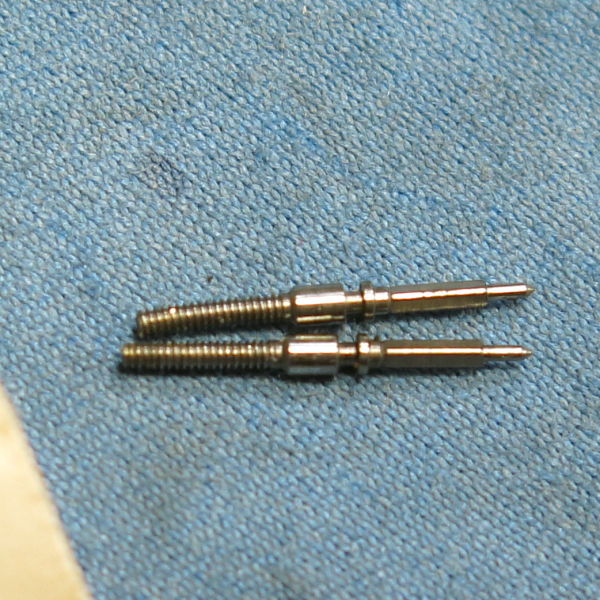 I'm not sure what color strap originally came on the Sherwood T but I chose a deep brown alligator strap for my watch.  I think a light chestnut brown color would be a great choice too.  With a lightly polished case, new crystal and crown, this watch looks factory-fresh. 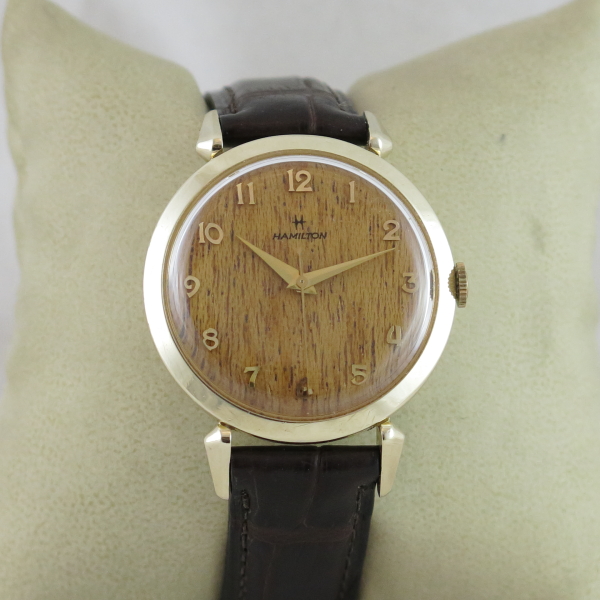 My light tent makes it hard to capture the sparkle of this watch but the gold hands and numerals really pop when the light hits them right. 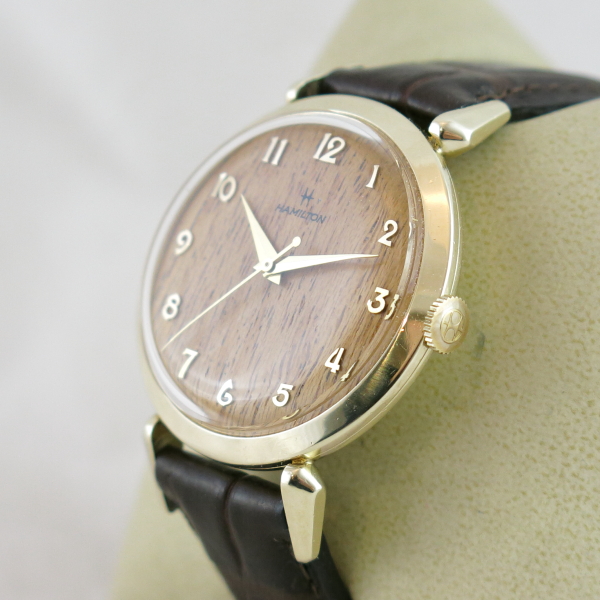