As a general rule I've tried to not post the same model twice, although I have occasionally broken it when I had a little more to say on the subject.  However, for the most part I've managed over the past 650+ posts to stick with something new to show you.  I'm about 2/3rds of the way toward the goal of documenting every vintage Hamilton mechanical model made.

So with that in mind, I thought I'd share with you a recent project that really shows you what someone who knows what they're doing can do (and it's not me... ha ha!). 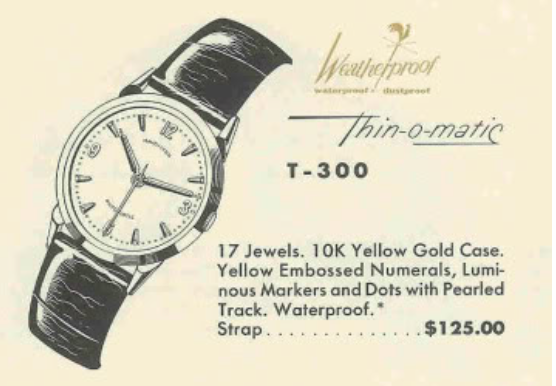 As I indicated above, I was recently introduced to a T-300 that needed some serious attention.  In most cases (pardon the pun) this watch would likely have been scrapped.  As you can see in the photo below, not only was it missing it's crown, it was missing two of the lugs! 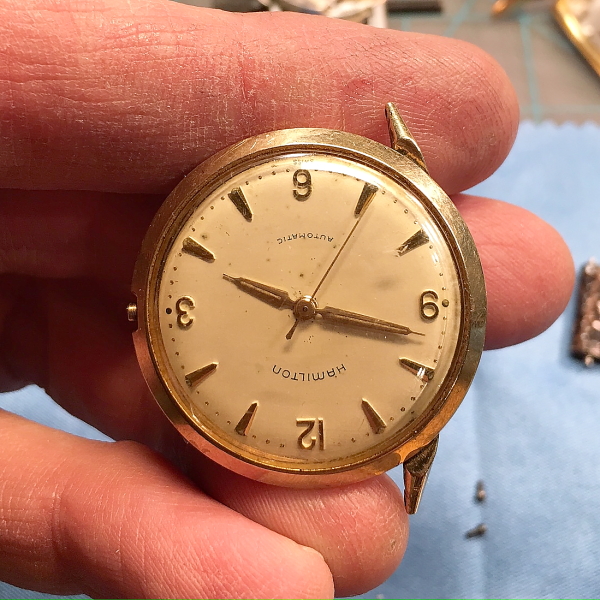 It's unfortunate that the missing lugs are on the same side of the watch, as sometimes you can at least use the watch as a pendant if there are two lugs on the same side.  But this watch was figuratively, "screwed".

The backstory of the project is like most vintage watches... it was somebody's grandfather's and as such, it was priceless to them.  It had to be saved.

I suspect the reason two of the lugs were missing was because the case could not be opened and they broke off during an attempt.  One of the remaining lugs is also bent inward, indicating this watch is lucky it's not missing three limbs.

The owner took it to a couple of places to try to open it before he sent it to me but without success.  The back was seized on tight as a drum.  Without a crown, it was quite possible the inside of the watch was a wreck too - although it appeared to tick, which is always a good sign.

Anyway, I tried unsuccessfully to open it as well and even applied penetrating oil for a couple of days with no luck.  The case back was already scraped up by other peoples' attempts and I didn't want to do any more damage.  Even applying penetrating oil worried me - "what if it gets on the dial?", I thought.

My last resort was to epoxy a large nut to the back of the watch and then use a conventional wrench to unscrew the joined assembly.  That's called "going all-in", as removing the nut would be near impossible if I wasn't successful. 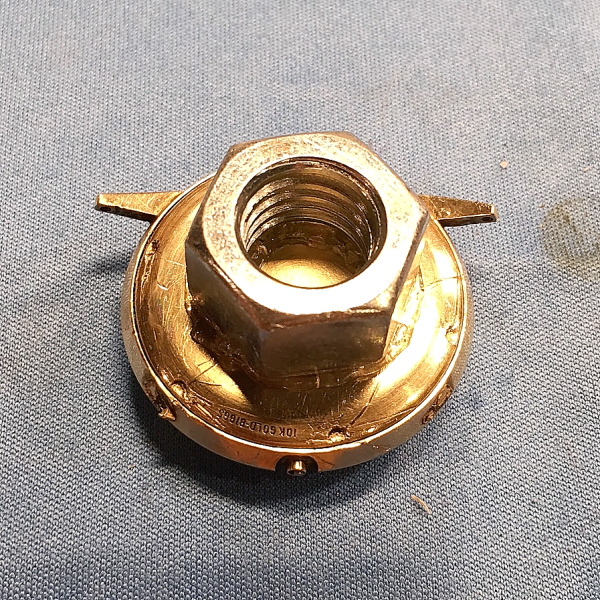 Newtonian physics would indicate that applying a great force to the nut would require an equal and opposite great force to restrain the case - otherwise the watch would just spin.  I secured the case as best I could in my vice and then lubricated the case back with beads of sweat that dripped from my brow as I attempted to apply force. 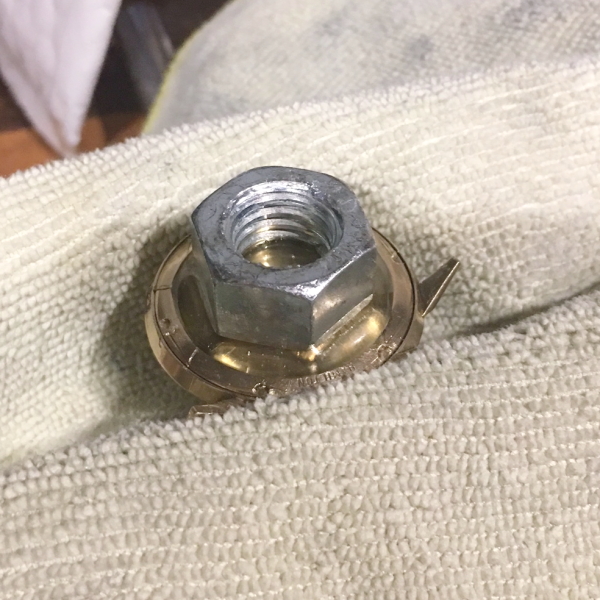 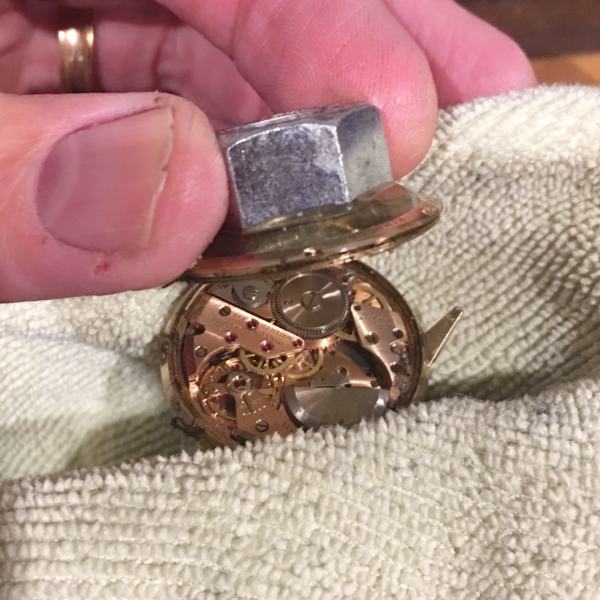 You may be wondering at this point how I got the nut off the case back.  That's straightforward - I simply boiled it in water until the epoxy gave way. 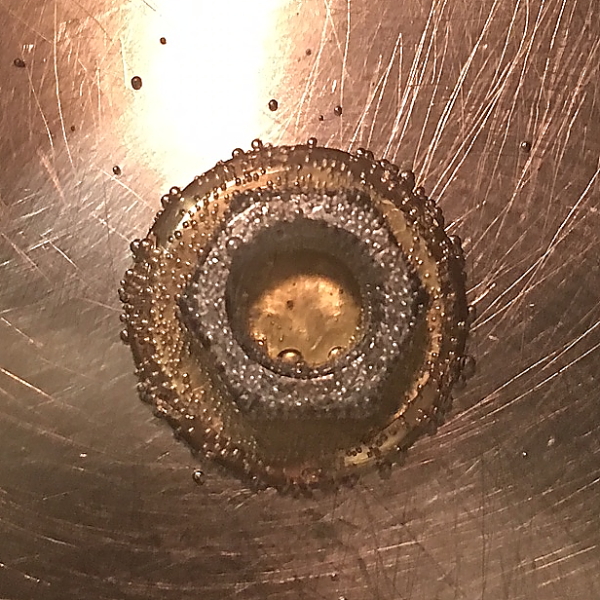 Of course, I still had some pretty serious issues to resolve but the case is looking nice and clean now.  I can tell by the mark inside the back that the rotor has been rubbing the case.  I'll worry about that later.  First things first. 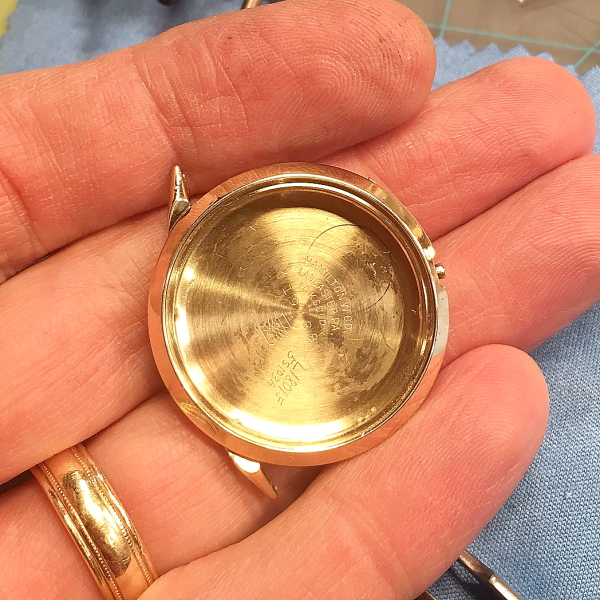 A little polishing and the case back is free of most of the signs of abuse, other than one major gouge.  The threads on the case are in good shape... a little wavy in some spots but the back screws on nicely nonetheless. 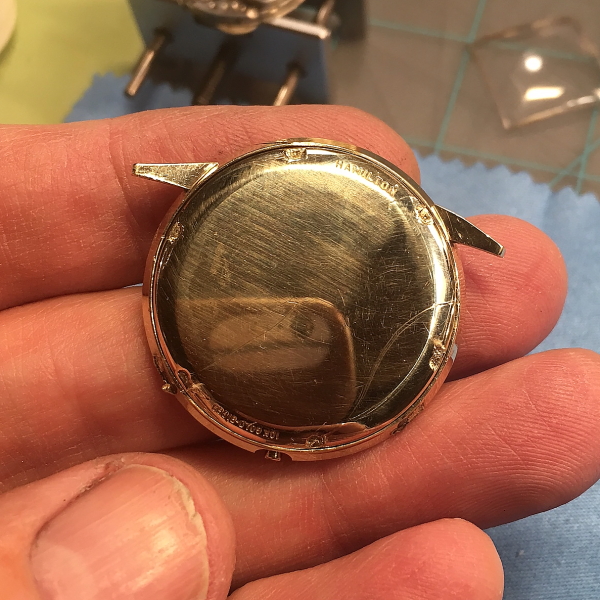 At this point in the project the real magic happened.  With the owner's approval, I sent the case to the very talented Lance Heck in Laguna Beach, California and asked him to fashion and attach two new lugs in 10K gold. 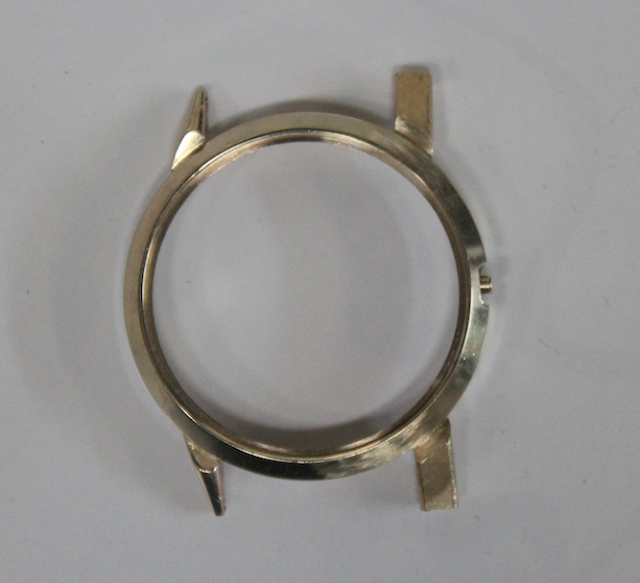 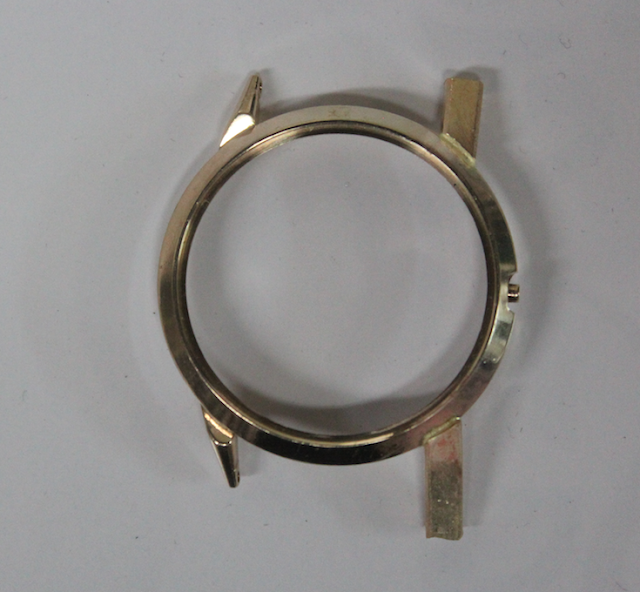 A couple of weeks later the case was returned and all I had to do was overhaul the movement, install a new crown and case gasket, install a new crystal, and fit a very nice genuine croc strap.  So I guess I had to work a little magic of my own too. 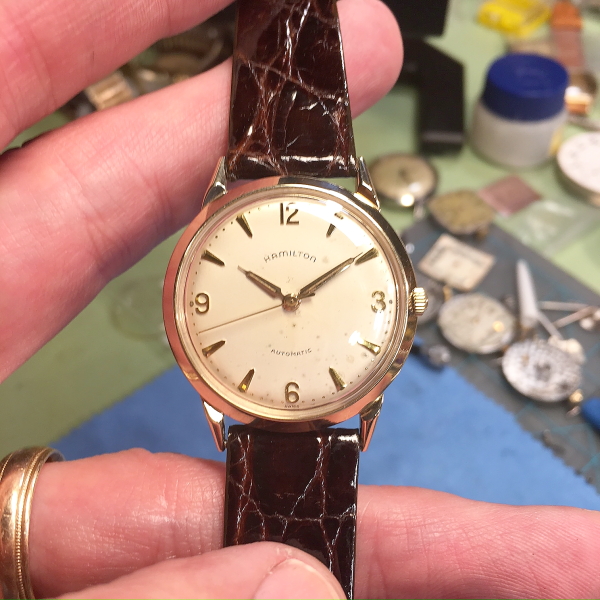 This watch turned out fantastic and I would challenge anyone to tell me which lugs, if any, are the replacements (assuming you didn't see the photos above). 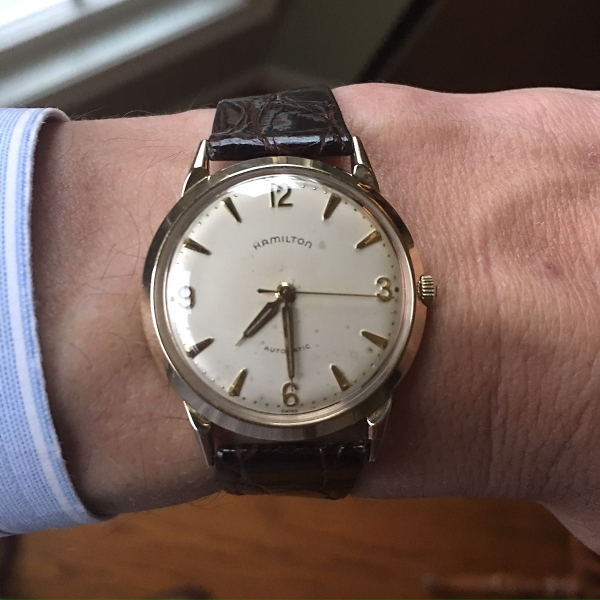 You may be wondering how much a project like this would cost.  Let's just say not as much as a new solid 10K Hamilton watch would cost.   A better question is how much is restoring your grandfather's heirloom worth to you?  With that in mind, this project was a great deal.

I think this project also shows that where there's a will, there's a way.  If a Hamilton watch is important to you, don't let anyone tell you "It's not worth fixing".