If you're going to explore the world of vintage watches you might find that everyone calls everything "Art Deco".  The vast majority of the time the term is misapplied but many of the watches from the 1930's truly display art deco principles.

One of the best examples, I think, is the Hamilton Heyward.  This watch was introduced in 1937 and ran for three years until 1939.

When I think art deco I think of the Empire State Building and the Golden Gate Bridge.  Art Deco designs involve linear symmetry with ornamental attributes.  The Heyward has a very symmetrical case with interesting stepped details and the dial also carries similar design details.

Just under 9,800 Heywards were produced and they came only in 10K yellow gold filled.   Two dial patterns were available... applied gold numerals and a black enamel dial.  I think both dials look great, in their own ways.

The Heyward utilizes a size 6/0, 17 jewel 987 movement.  Based on the production years you might find either a 987E movement or the later 987A movement.

Here's a photo of the AGN version.  I just love the two-tone white / butler finish with the prominent gold figures standing proud of the dial surface. 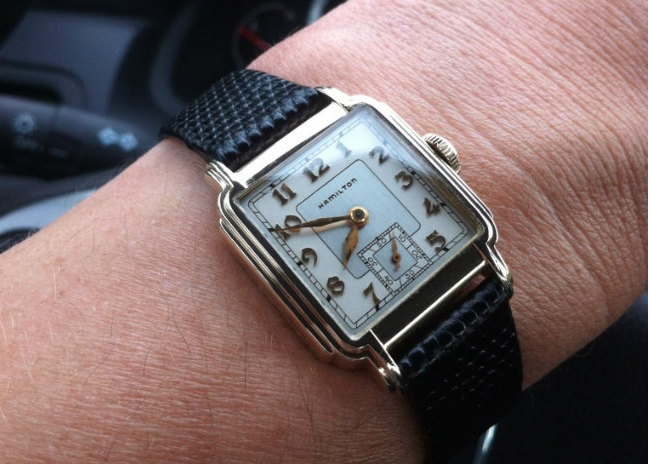 And here's another wrist shot of the enamel-dialed version.  Note how both models used "lozenge" shaped hands, including the second hands - very cool.