The 1937 Hamilton Elliott may be the smallest man's watch that Hamilton made... if not the smallest, it's in the top 3 for sure.  By today's standards the Elliott is better suited to a lady who appreciates fine vintage watches.

Made for only three years, the 1937 Elliott was the first version to bear that name but not the only one.  There's also another Elliott model from 1962.

Behind the dial is a 17 jewel 980 movement and it pretty much fills up the case and extends beyond the dial into the lug area.

The 14K yellow gold filled case is prone to wear through on the corners of the bezel near the lugs.

Two dial varieties were available, an inlaid black enamel dialed version (shown on the ad) and an applied gold numeral dial - which is more commonly found.

I purchased an Elliott project watch a while back and although it turned out well, it's so small that it doesn't really get any wrist time.  It takes a 16mm strap and as you can see in the photo below, the watch is only about 20mm wide overall.  There are similarly narrow models in the Hamilton line-up from the 1930s, but most of them were much longer, curvex-style watches and they wear a little larger on the wrist. 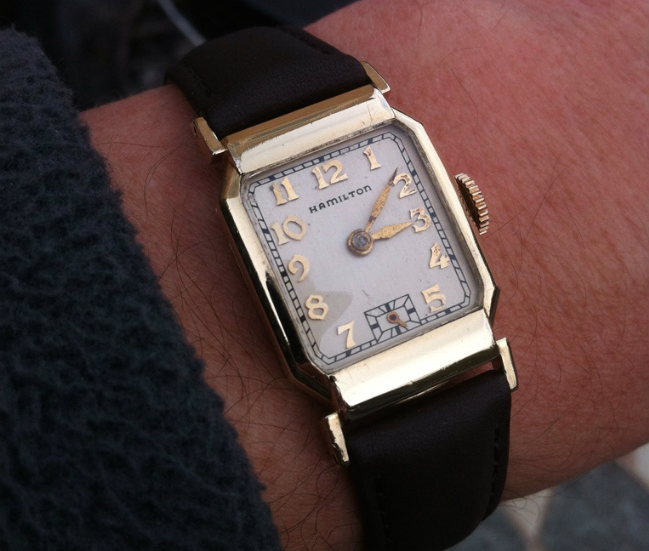