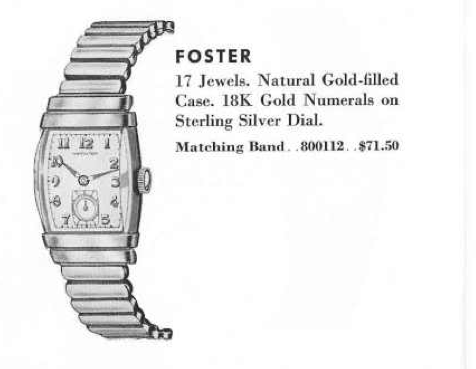 The Foster came in a 10K yellow gold filled case and was outfitted with the 752 movement.  The sterling silver dial has solid 18K gold numerals.  The case has "hidden" lugs so you can't see how the strap attaches (from the front, anyway).   The matching bracelet blends right into the case bezel.

The 1955 Foster has a different dial pattern 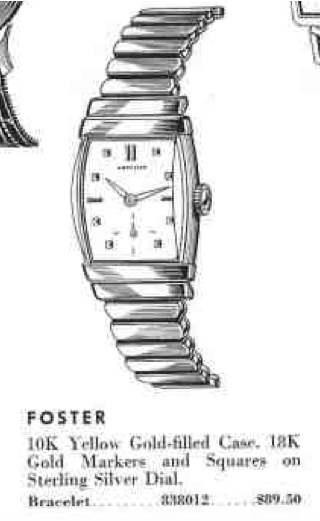 I recently received a Foster in need of some love.  I was delighted to see that it was still outfitted with it's original bracelet. 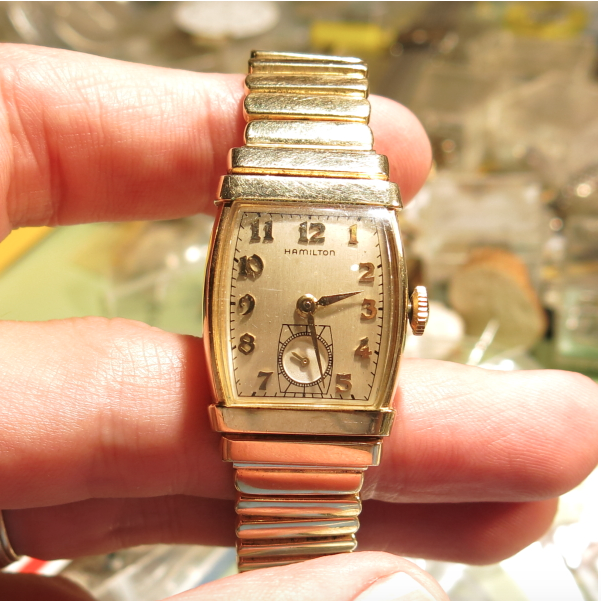 In fact, if it wasn't for a slight chip to the side of the crystal - this watch was in extraordinarily nice condition... except, of course, for the whole not running problem it had. 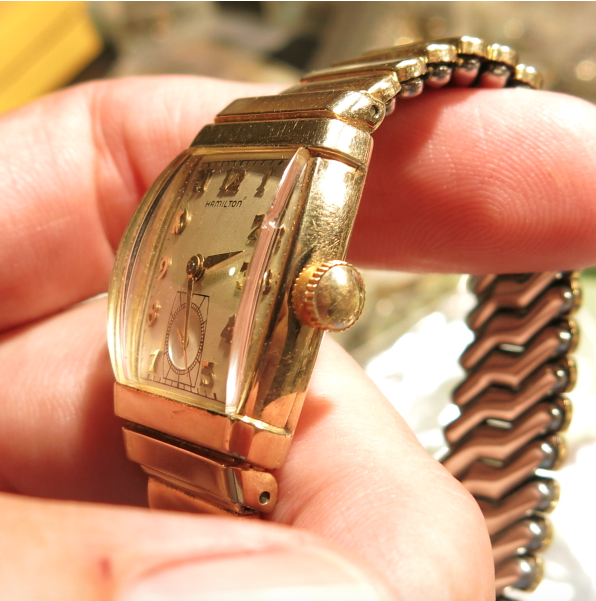 With the back removed from the bezel, the dial and hands are near perfect.   It looks pretty original to my eye and there are no notches on the side to indicate it's been redialed - but I'll look on the back to be sure. 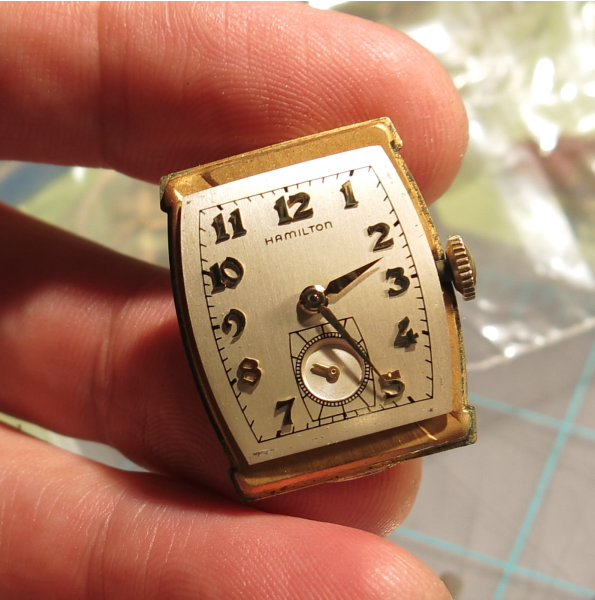 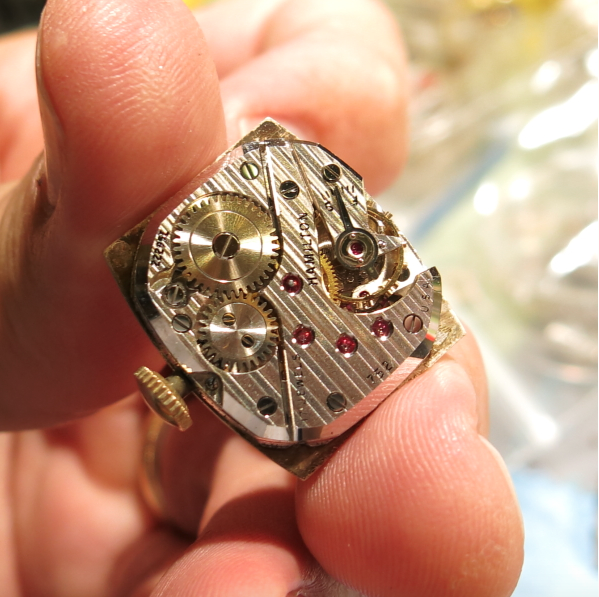 Here's the back of the dial.  There are no marks to indicate the dial was redone - so I'm 100% sure this is an original dial.  That makes sense since everything else looks new old stock (NOS) as well.  I wonder what the recessed circle near the second hand hole is... it's very odd that it's not centered.  Note that the other side of the dial has a recessed secondhand too - so this dial is fairly thick. 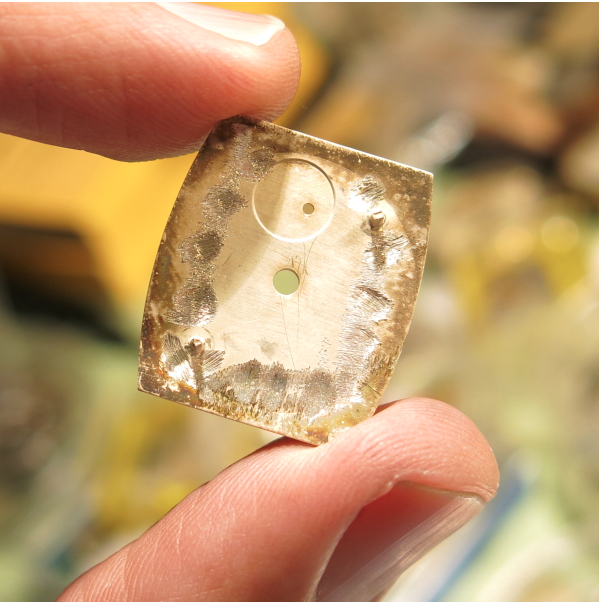 I will spare you the blow-by-blow details of the overhaul.  You can look at the overhaul examples in the menu on the right side of the screen if you're curious to see how it goes.

Once I reinstalled the balance the watch took off running as it should.  Based on my timer is was running about 34 seconds per day fast.  I can do better than that. 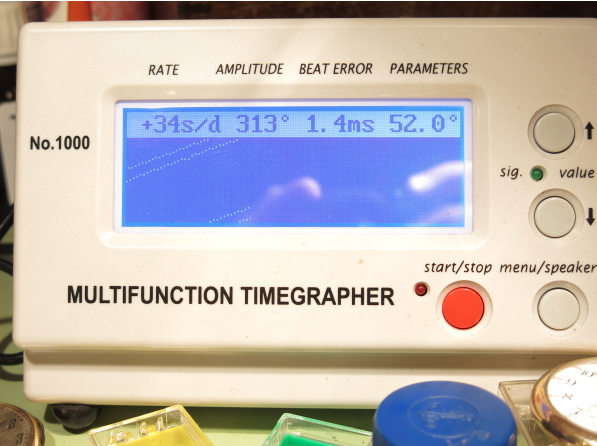 Here's a shot that shows me tweaking the regulator and slowing the watch down.  As the lines become horizontal it's approaching running exactly 18,000 beats per hour.  It's really amazing how watch timers can "hear" what's going on in a watch and tell you what it's doing. 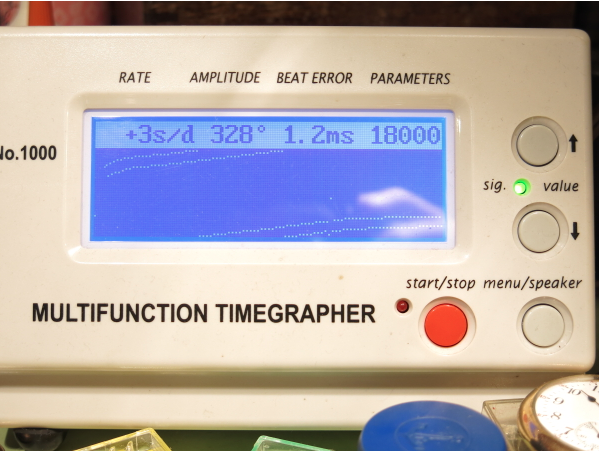 And here's the "HandyDan Pillow Shot" of the finished project.  You can still see the little chip on the right by the 2 but otherwise this watch looks fantastic.  I doubt there are too many Fosters out there in better shape - that's for sure! 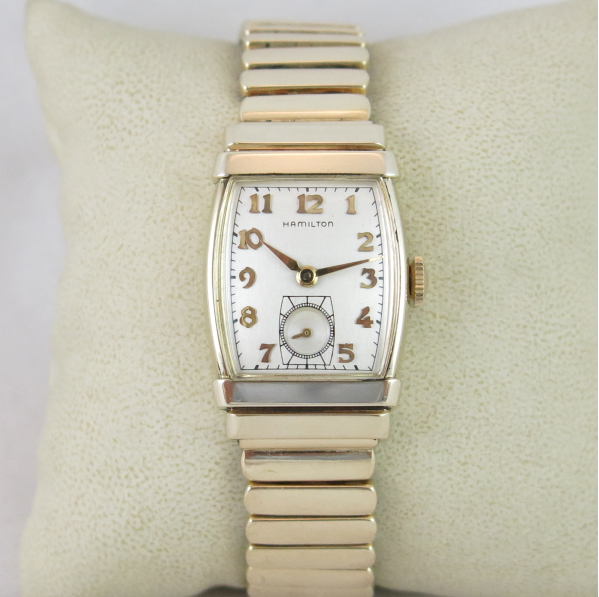