Military watches is a collecting genre unto itself.  You can specialize in a time period like WWI trench watches, or watches used during Vietnam, or even watches used solely for navigation.   For WWII collectors, Hamilton offers a variety of military watches that would make an awesome collection if you obtained of every different variety.  Even several different pocket watches were produced for the WWII war effort.

If you're curious about US military watches produced for WWII, you really ought to check out the War Department Technical Manual TM 9-1575.  It provides a wealth of information about wrist watches, pocket watches, stop watches and even clocks.  Hamilton, Elgin, Waltham and Bulova models are covered.  Here's a link to it...  TM 9-1575

For Hamilton 6/0 sized military wrist watches, the earliest examples came in a cup-style case, where the movement sat in a case back that snapped into the bezel.  These watches are often referred to as Tea Cup watches. 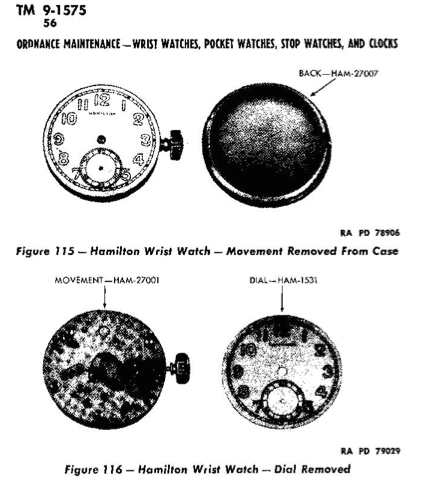 They are nowhere near being waterproof so the design was quickly changed to a screw back case with a gasket and a better sealed crown as well.  The screw-back version is much more common and several different case makers made them.  You can read about the screw-back version here.

I recently picked up a Tea Cup model.  I've seen quite a few of them for sale from time to time but this one seemed to be almost unused so I snagged it.  Like any new "old watch", I make sure it's serviced before putting it to use.

In the photo below, you can see that the dial was horribly burned by the radium on the hour hand.  This watch surely sat idle for a looooonnng time.  This first thing I did was take the dial and hands off and send them out to be refinished. 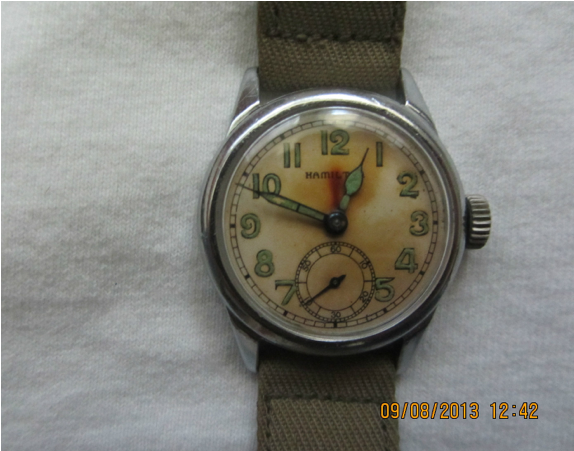 I put a spare dial on the watch while the other one was out being refinished.  Once it came back, I got to work on the movement itself.  In the shot below you can see the bezel is in great condition.  The canvas strap is very nice too. 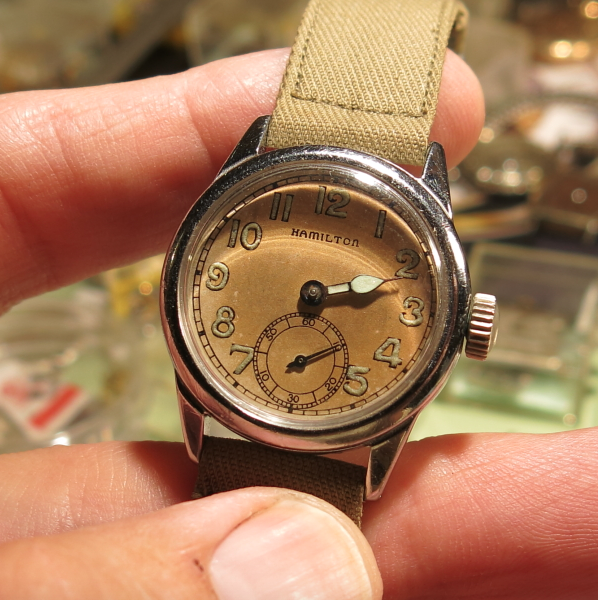 The case back doesn't have a serial number.  I suspect this watch was never issued.  That's probably why it's in such fine condition overall. 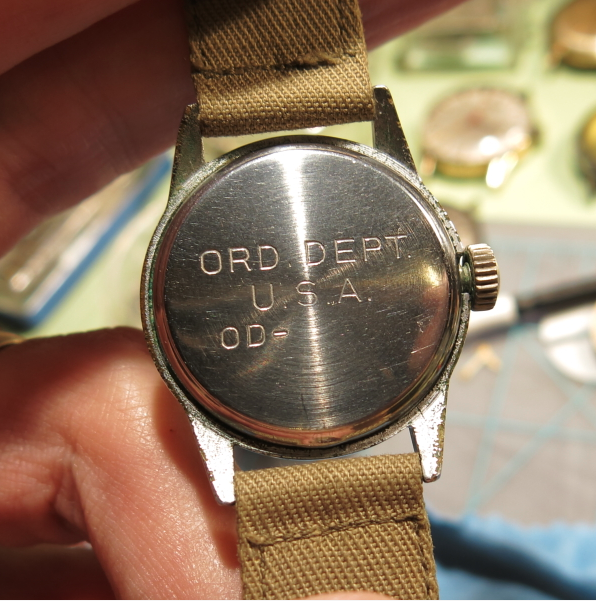 Inside the cup-style case back, you can almost make out the mark of a prior watchmaker who serviced the watch.  Under a loupe it appears to be a date from 1971. 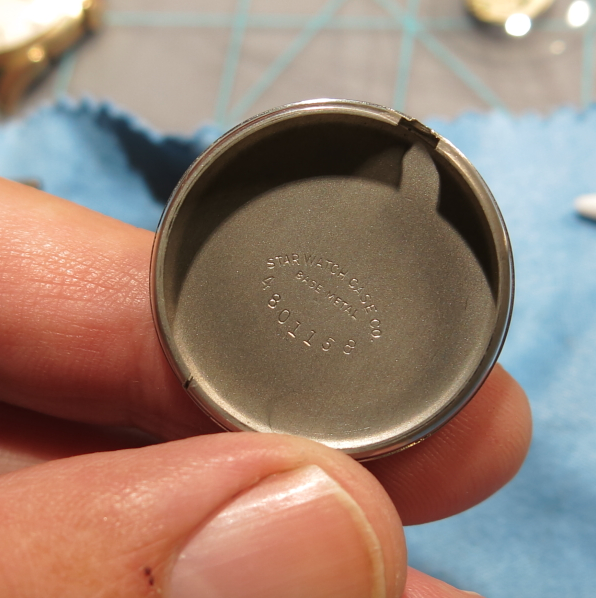 Three dial feet screws hold the dial on.  A small screwdriver is needed to loosen them so the dial will lift off. 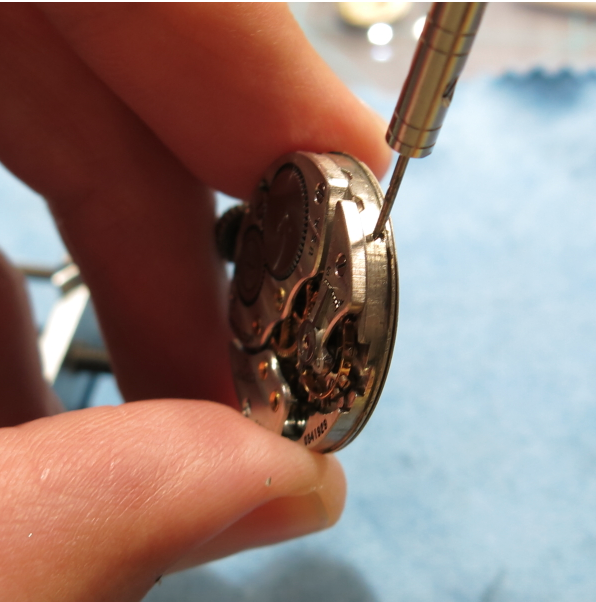 Under the dial the hour wheel (in my tweezers) and the cannon pinion beneath it are removed. 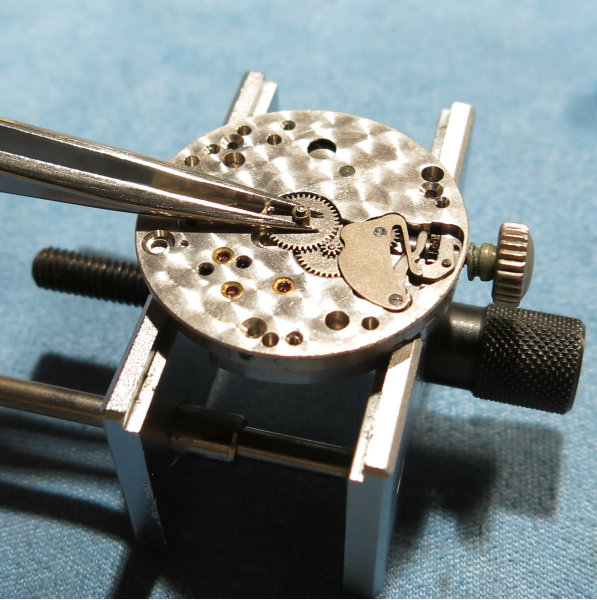 With the mainspring totally released, I can start removing the screws from the back.  The first ones off are the ratchet wheel and the winding wheel screws.  Four other bridge screws hold the barrel bridge and the train bridge in place. 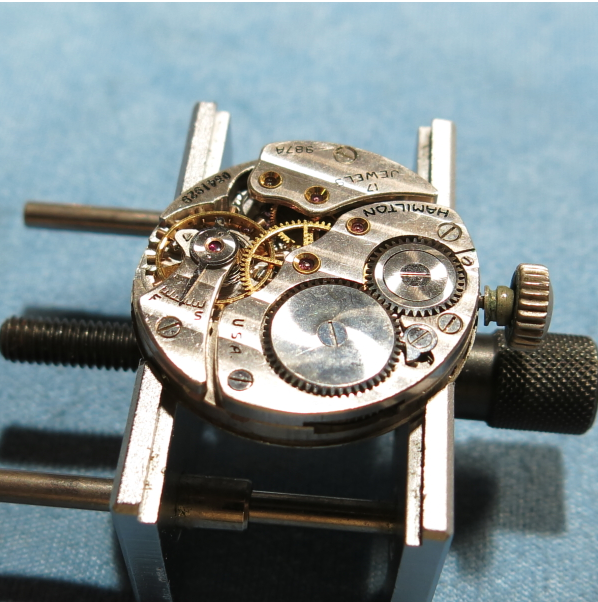 Removing the train bridge and the barrel bridge exposes the gear train below.  All of these parts will lift off now - that's why I took the hour wheel and cannon pinion off first. 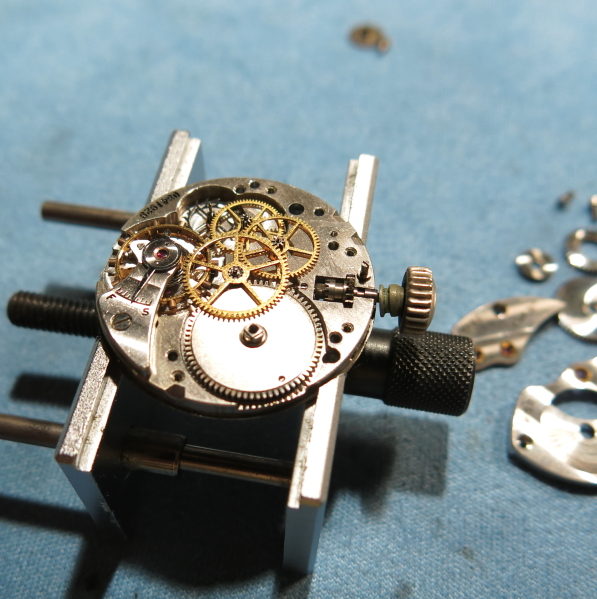 The balance assembly comes off next and exposes the pallet fork and it's bridge - held in place by two small screws.  The serial number starts with an O (oh) and dates the movement to 1944. 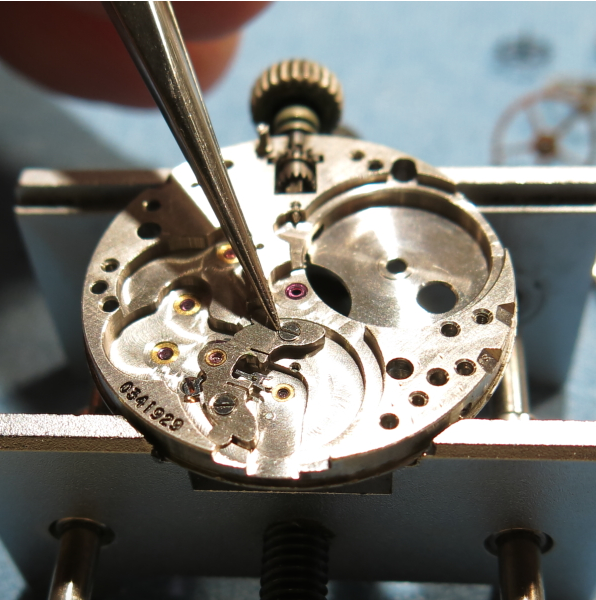 With the movement main plate flipped over, the next stuff off is the cap jewel that covers the upper balance pivot and the set bridge along with the minute wheel and setting wheel under it. 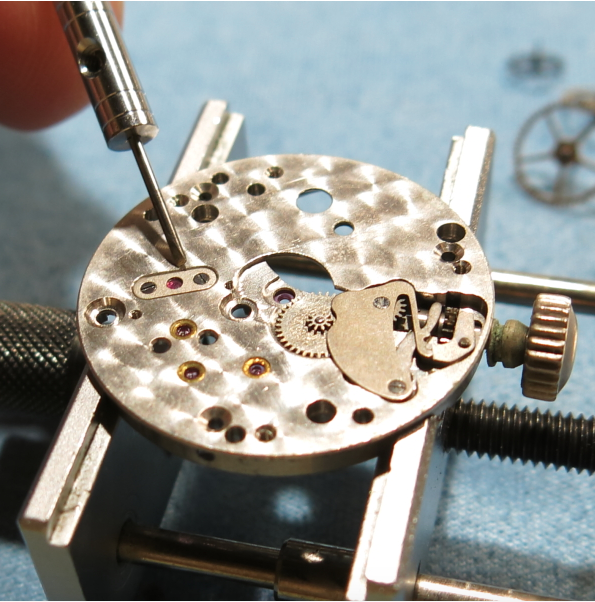 The movement is now clean of the major parts.  I tend to leave the other parts (set lever, spring, etc) on the movement so I don't lose them.  They'll get just as clean and I won't have to look for them later - springs especially can be notorious for disappearing into thin air. 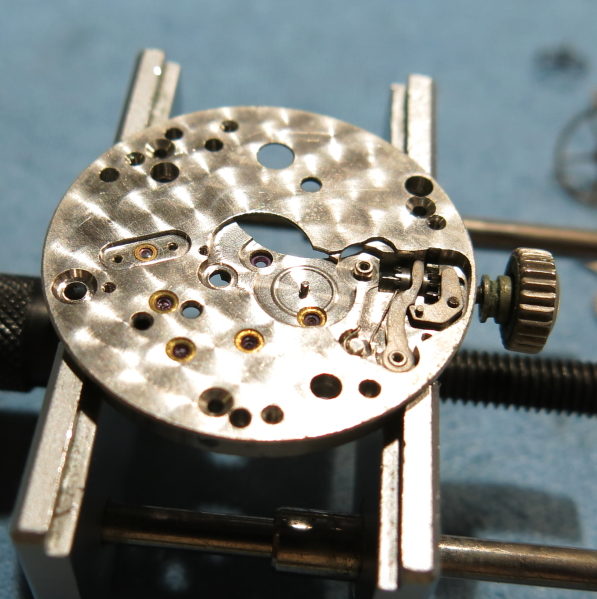 Everything but the balance and pallet fork go into a jar with cleaning solution and the jar goes into my ultrasonic cleaner with water.  Six minutes will do the trick.  I'm always amazed at how "dirty" the solution will get from a relatively clean looking movement.  Plus there's always a fine layer of metallic dust inside - a testament to why you want to make sure a watch is cleaned and oiled every 3-5 years. 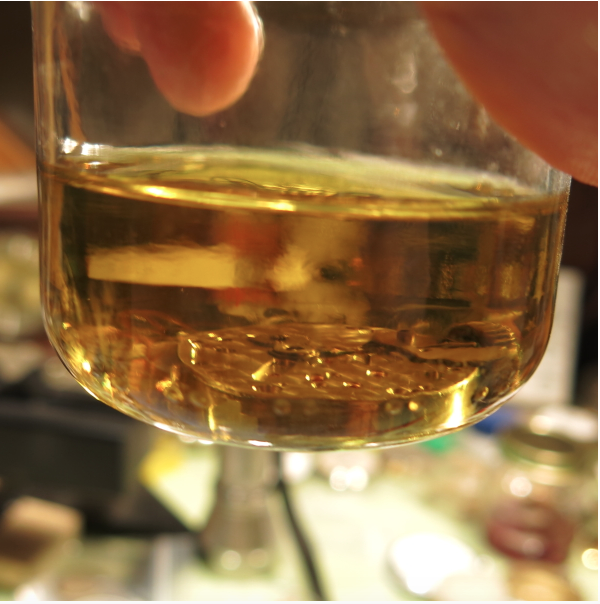 I clean the pallet fork and balance assembly separately in hairspring cleaner.  Both of these parts have delicate jewels secured with shellac and the ultrasonic can shake them loose.  Trust me, you don't want to have to reinstall these jewels - they are tiny. 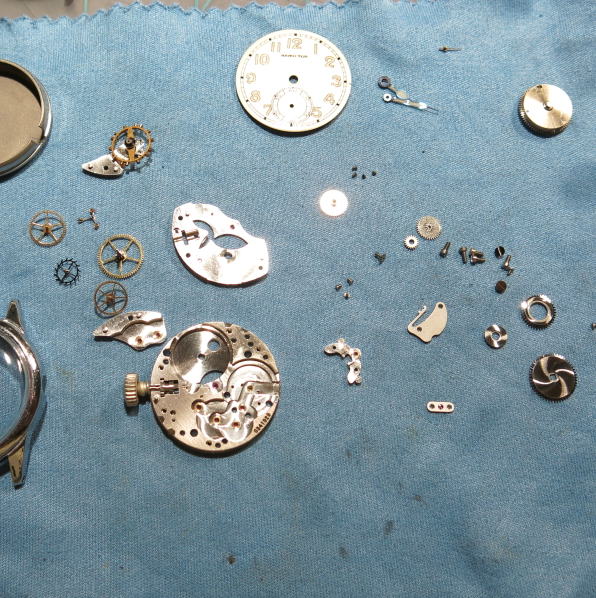 First to go back on is the stuff that came off last - so that's the cap jewel and the setting parts.  The red "jelly" is microgliss lubricant to keep all the parts moving freely. 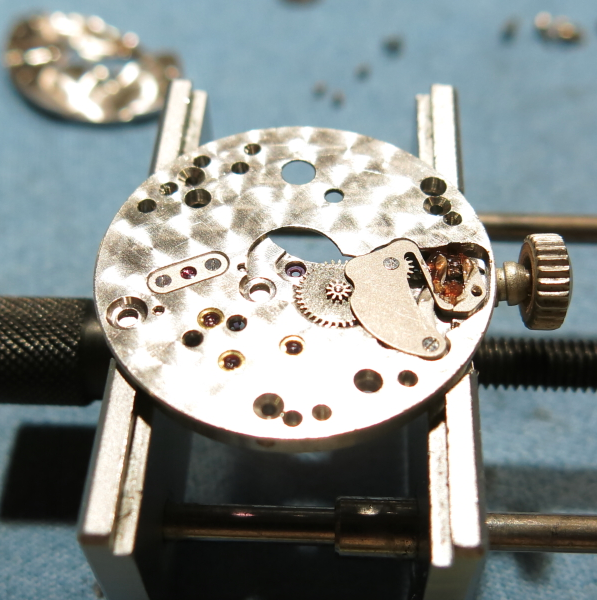 With the front complete for now, the movement is flipped over and the pallet fork is installed.  All of the jewels get a tiny droplet of oil, even the two pallet stones.  Then the escape wheel and fourth wheel go in. 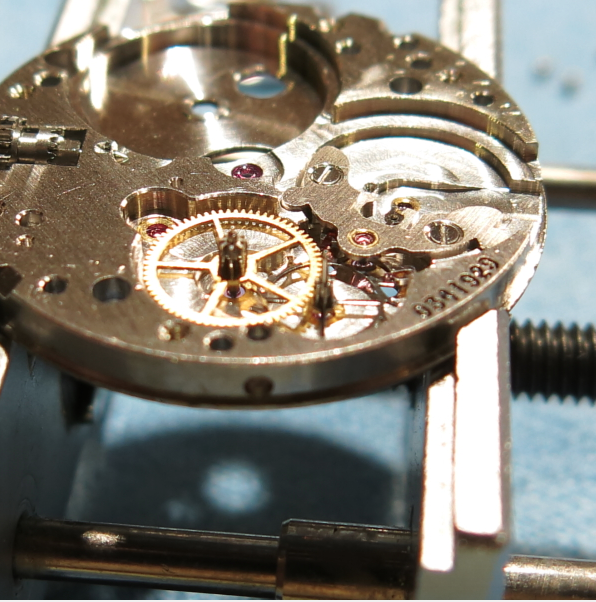 The train bridge is secured and the third wheel, center wheel and mainspring barrel go on.  I use the set lever screw that my tweezers are pointing to as a guide for aligning the barrel bridge. 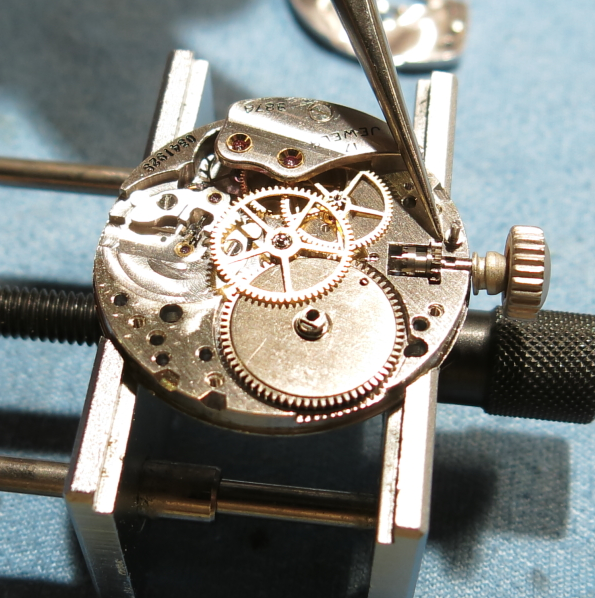 With the barrel bridge installed, I can check the play in the gear train.  A gentle nudge to the center wheel should transmit freely to the pallet fork at the other end of the train.  If the pallet fork doesn't move freely, power won't get to the balance and the watch won't run.

Next on are the winding and ratchet wheels, along with some oil. 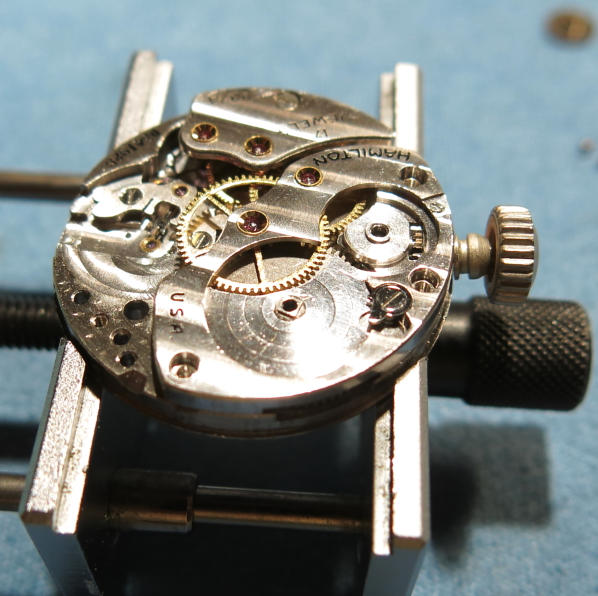 The back is almost complete.  The only thing missing is the balance assembly.  Before that goes on I will put the three dial feet screws back in - they usually fall out during the cleaning process.  They're very small so I prefer to put them on before the balance goes on - as they sometimes will slip into the movement and it's easier to get them out if the balance isn't there. 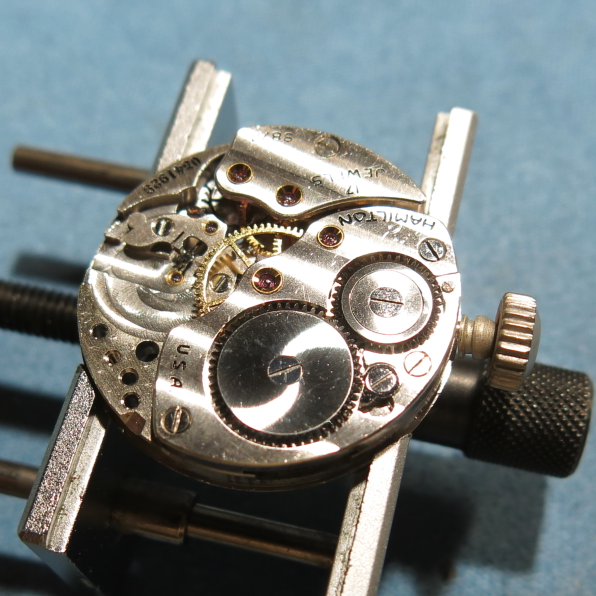 Reinstalling the balance is a delicate job.  The first trick is to get the oiler through the hairspring so I can oil the jewel in the balance cock.  If any oil gets on the hairspring it will goof up the timing so great care is required at this point. 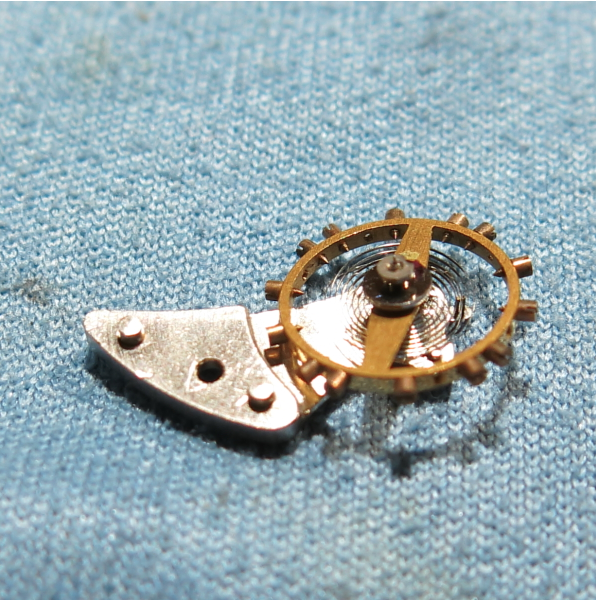 The balance goes back into place and with a few turns to the mainspring the watch comes back to life.  You can see the balance wheel happily purring away. 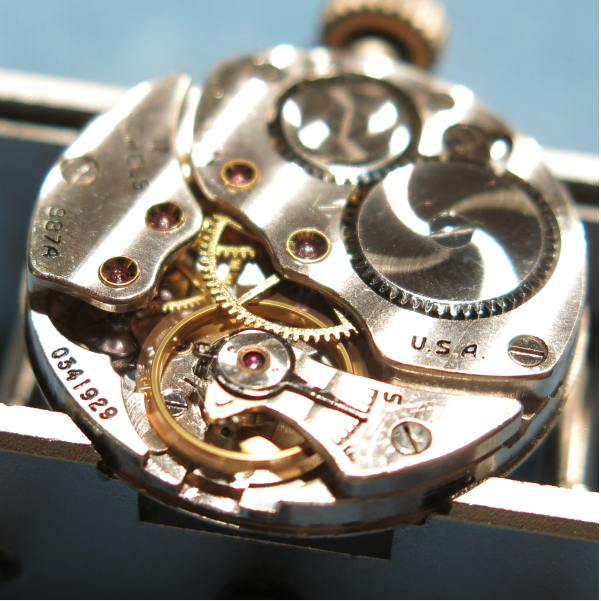 Onto the timer, the watch movement goes, and with a little tweaking here and there the timing eventually levels out to 7 seconds fast per day with excellent amplitude. 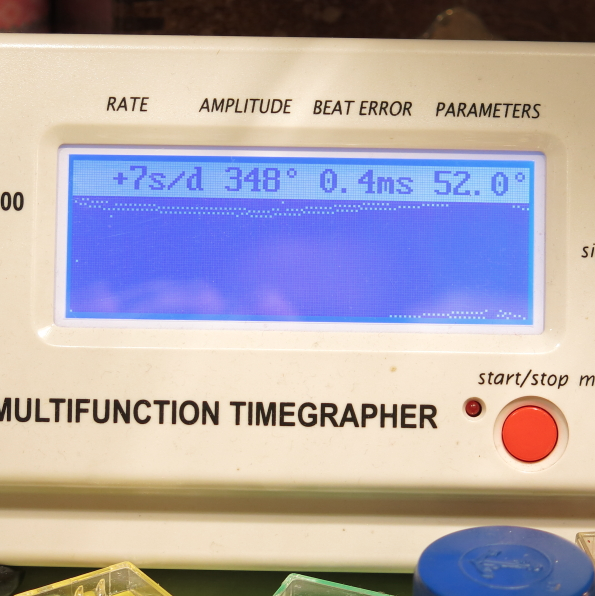 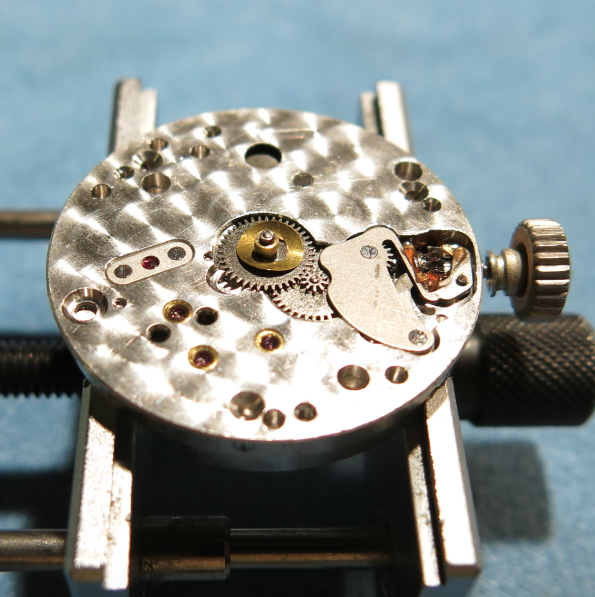 The dial and hands go back on now.  It's easiest to align the hands at midnight - then they'll stay in sync all the time. 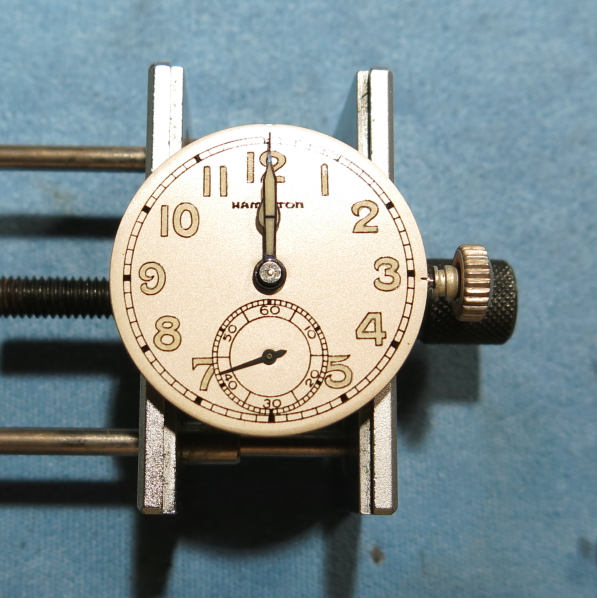 And finally, everything is put back together and this watch is ready for it's close-up.  Pretty fantastic looking example of a Tea-Cup, if I do say so myself! 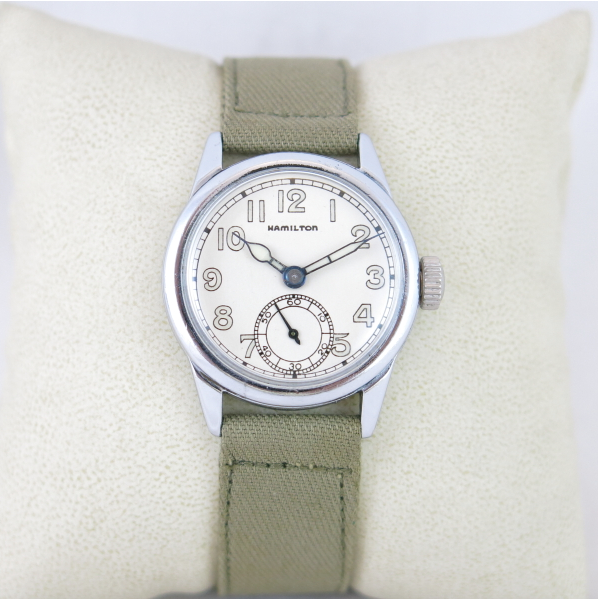