From 1942 to 1946, Hamilton's production was dedicated to the war effort.  Watches and time keeping devices of all sorts were produced for the US Government and our allies. 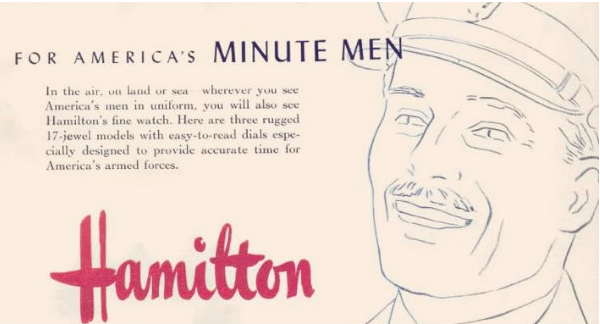 I posted earlier this month an example of a Model 22 Marine Chronometer... a 36 size watch that served aboard ships as the official time keeper.

Hamilton also made "bomb timers" that used the 14/0 980 movement in a special case with a hack function.  These timers were installed in planes and were used by bombardiers to synchronize bombing runs and effectively hammer their targets.  Some collectors have converted these cases to accommodate a strap although they're technically not wrist watches.

Military personnel also were issued time pieces when they went "into harms way".

Initially cases were made by three manufacturers - Wadsworth, Star and Keystone.  Some cases had screw on backs and some had a pop-on back (called a tea cup case).  Early cases were chrome plated and were prone to extensive wear.  They were eventually replaced by a parkerized case with thicker lugs.  These cases were used during the Korean war too - but with the 8/0 size 747 movement.

Parkerization is a special coating often used in guns as an alternative to bluing.

Early cases were engraved on the back with "Ord Dept USA" and a serial number starting with OD - representing a non-waterproof case with 15-17 jewels.  The Navy cases were marked differently on the back.  A letter was stamped between the lugs representing the case maker... H, W, or  S.  H and W are Wadsworth cases and S was for Star Watch Case company.  As far as I know, Navy watches used Wadsworth cases, while the other services used both manufactures.

Here are some examples that I've acquired.  I don't have a complete collection though, so this isn't an exhaustive list.

First off are some wrist watches.  Generally speaking, black dialed wrist watches were used by the Navy.  The back of the case will be engraved "USN BUSHIPS".  The dial will also have Hamilton embossed in black on the dial - albeit hard to see.

A watch like this one with the sub second hand at 6 will feature a 17 jewel 987A movement.  The case will have a screw-on back cover, with a movement ring and dust cover inside, along with a gasket. 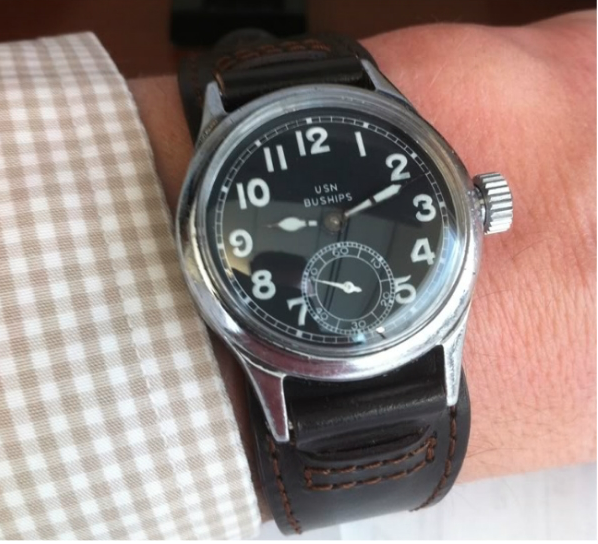 A sweep second hand watch was also available.  Depending on the watch it will have a 17 jewel 987S movement inside, or it could have an 18 jewel 2987 in specific naval aviator watches.  In this shot the white-tipped second hand is directly over the 7 so it's hard to see it.  This watch is in a parkerized case, introduced at the end of the war (or slightly after) to replace the chrome plated cases that suffered a lot of wear. 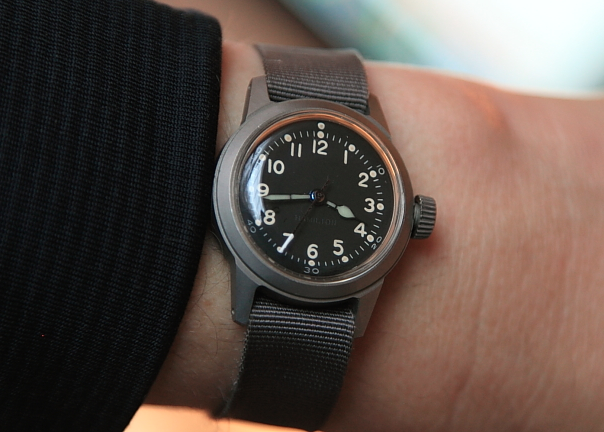 This sweep second hand version is in it's correct WWII Wadsworth case. 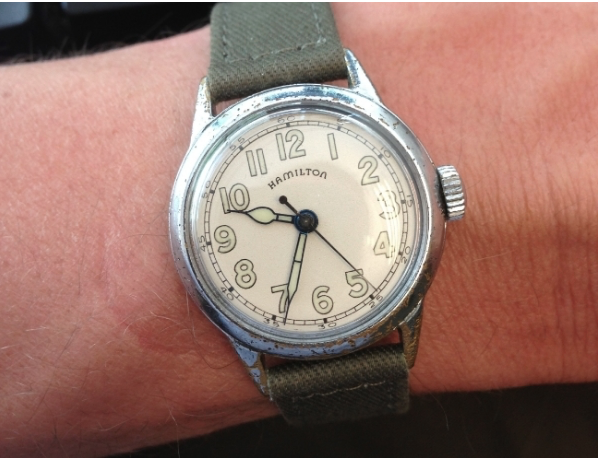 The Army and Marines used white dials and watches would use 987A movements with the sub second hand. 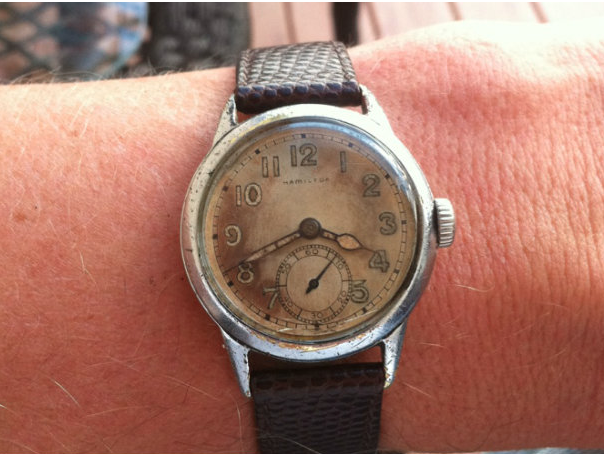 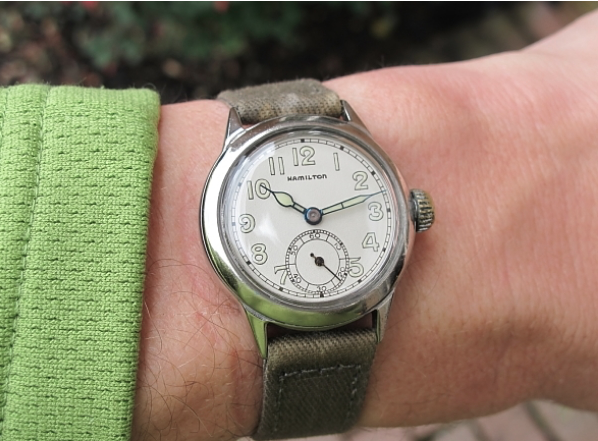 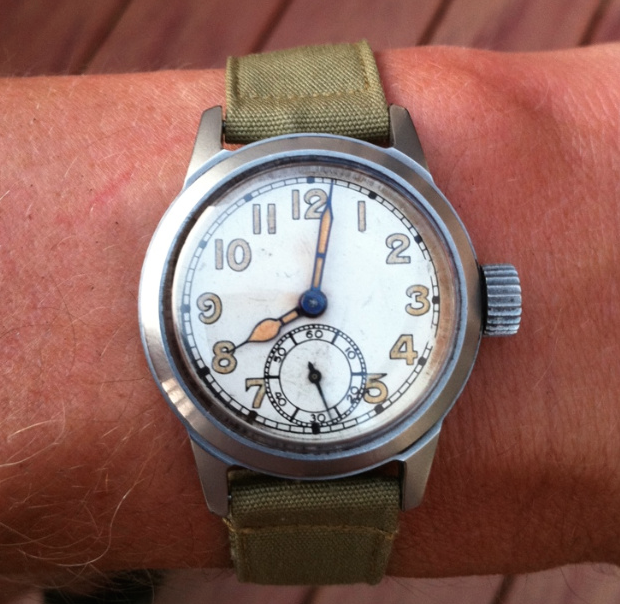 Here's a couple of examples that I have assembled using NOS cases with refinished dials.  I think they really turned out nice. 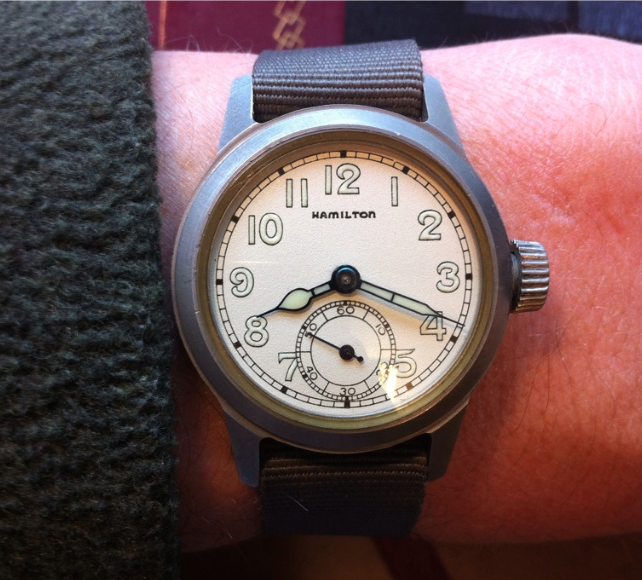 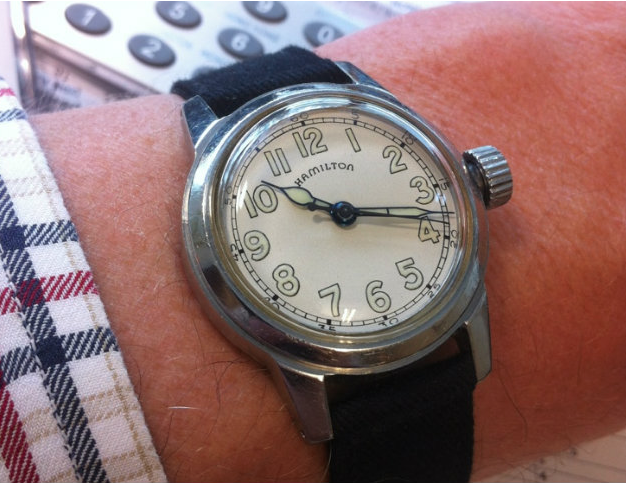 I've also seen (and purchased) military branch-specific dials.  I don't think they were issued for general use but may have been options for personnel in military exchanges and PX's.

Here's an example of US Navy and Marine Corps watches I've assembled and given to buddies I've known in the service. 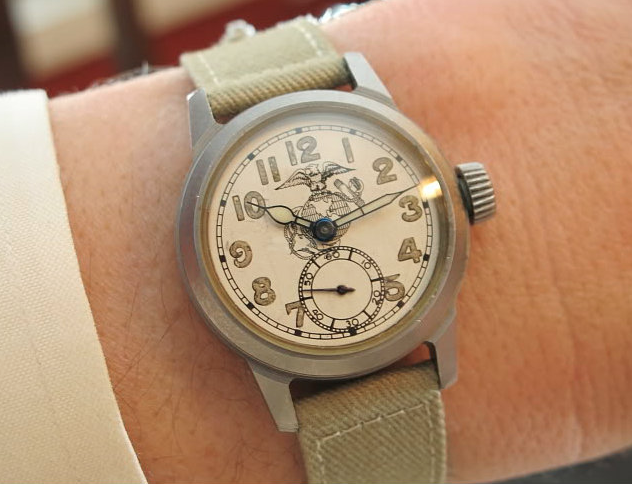 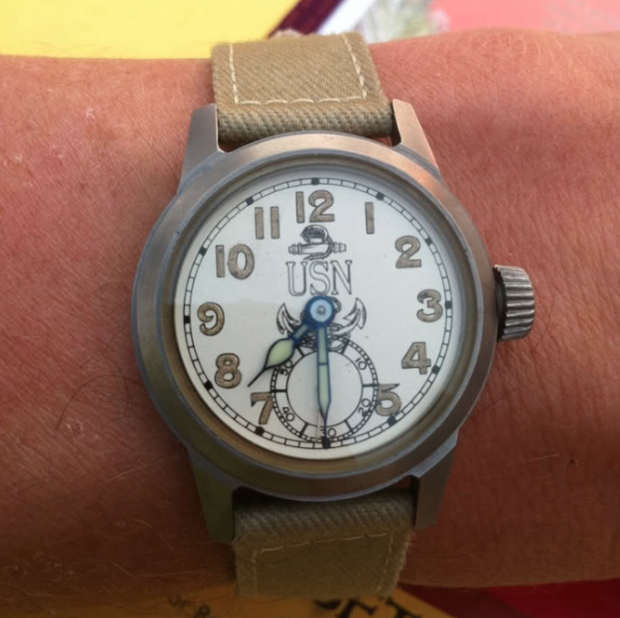 Of course, military watches aren't limited to wrist watches.  Pocket watches were also produced using the 21 jewel 992B movement as well as the 22 jewel 4992B with a sweep second.

Here's an example of the 22 jewel 4992B that my wife's grandfather used during the war while serving in the Pacific as a Naval Flight Officer (Navigator).  This watch has a special hour wheel behind the dial so the hour hand moves half as fast and normal - making the dial an 24 hour dial... currently the time is 20:12, or 8:12PM. 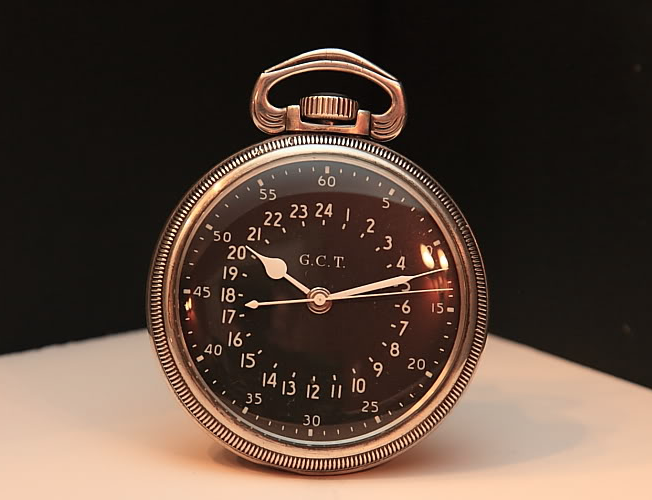 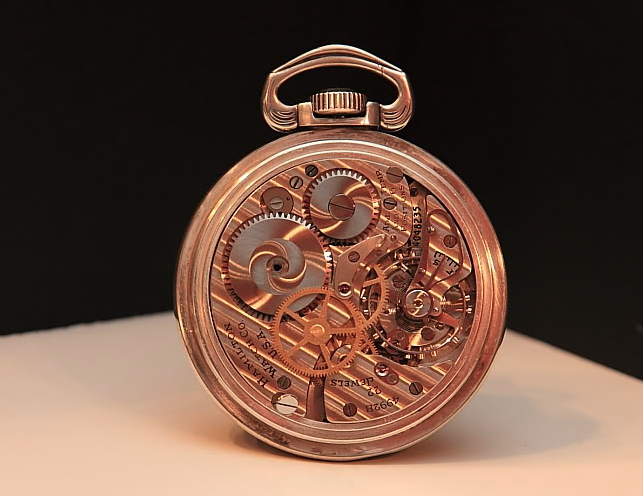 Of course, the Army got pocket watches too.  This one below is interesting as it's a Railway Special but marked US Army on the movement (on the left side at about 8:00).  I guess military trains needed to run on time too! 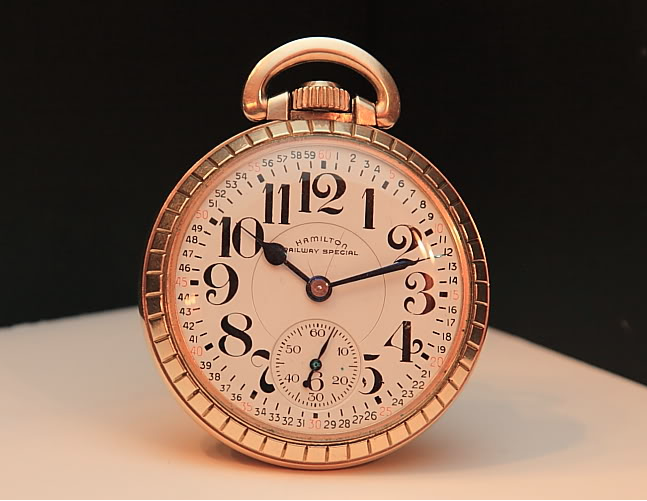 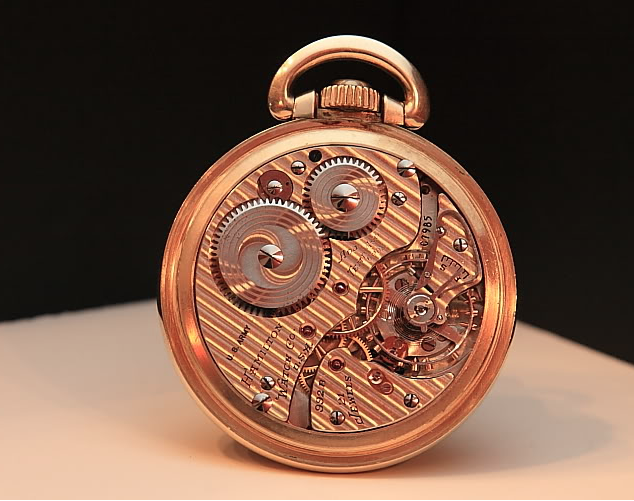 If you compare the 992B movement and the 4992B movement you'll see they are very similar.  The latter has an extra wheel on the back and a pinion to drive the central sweep second hand.  There's a jeweled bridge to hold the second hand shaft and that's the 22nd jewel that makes the 4992B different.  Otherwise they are largely the same.

If you've got a really good eye for details you'll note the 4992B is missing the mainspring wheel screw... not to worry, it fell out for some reason when I took the picture but I have it.
Posted by HandyDan at 5:16 PM