It's been a while since I've shown a pocket watch on the blog.  That's partly because I try not to repeat models and I've done quite a few pocket watches already.  You can find my past pocket watch projects in the menu on the right under "pages" or click pocket watches.

There are a lot of different pocket watch movements and I've really only done the more common ones.  Like a lot of collectors, my Hamilton mania began with a pocket watch that used to be my grandfather's... a 992B Railroad Special.

Speaking of common pocket watches, one particular model was introduced in 1914 for the "common working man", the 956. 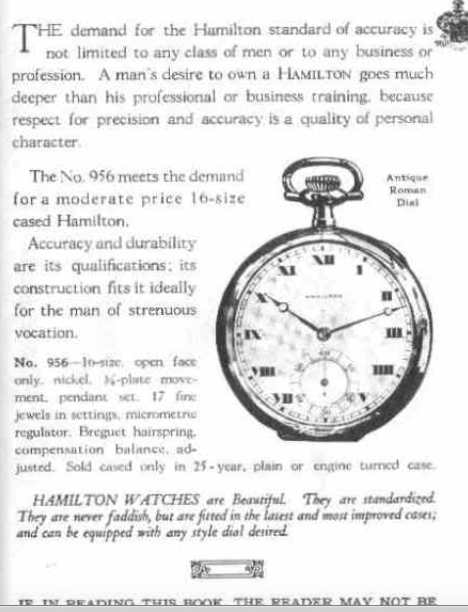 Back in the first quarter of the last century most pocket watch movements were sold separately from cases. So you would go into your local jewelry store and pick out a movement and then pick a case for it to go into.  The 956 was the first 16 size pocket watch that was sold already cased.  It cost around $25 while the higher end pocket watch movements started at $28 or more.  With higher grade movements you had to buy a case too.  So the 956 was a "value-model".  Of course, $25 in 1920 was the equivalent of $300 today... so this was not an inexpensive watch.

Most railroads required a minimum of 21 jewels, among other attributes (open faced, lever set, etc.)  to gain railroad approval.  The 17 jewel 974 movement was approved by some smaller railroad and trolly lines so they're technically "railroad approved" in some respects too.  The 956 would not be considered a railroad watch... but most people didn't work on a railroad either.  Everyone still needed a reliable timekeeper though.

The story behind my 956 project watch is a bit complicated and a long one... but that's why my blog is called Hamilton Chronicles.

Believe it or not, I started out with an empty case.  It came with a parts movement that I used as a donor to complete another project a while ago.  I liked the case though, and specifically the train motif on the back.  So I decided to try to find a movement to put inside. 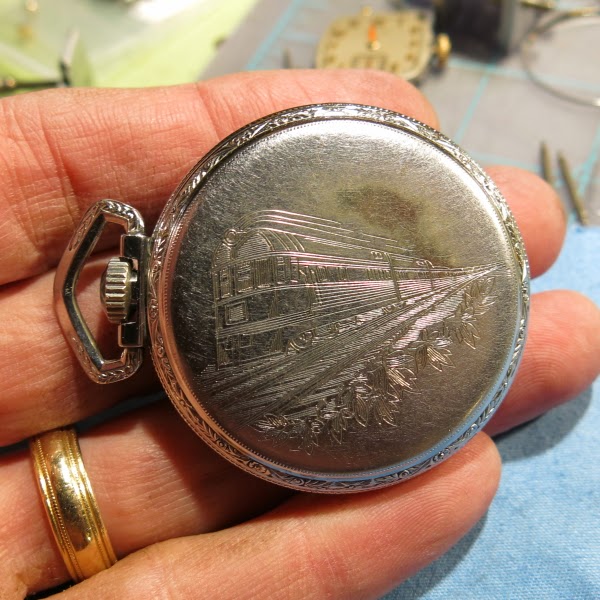 My case was set up for either a pendant-set movement or a lever set movement but I decided to go with a pendant set movement for the project.  I found a loose 956 on eBay for about $30 that didn't run and had a broken mainspring.  When it arrived I quickly realized it hadn't seen a watchmaker in many years - as it was filthy.  Based on the serial number, the movement dates to 1921. 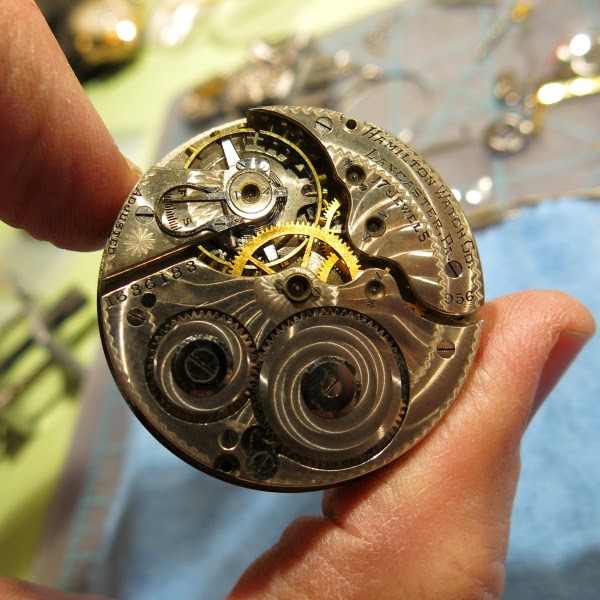 My litmus test for determining the cleanliness of a watch is how bright the jewel settings are.  In this movement you can see the settings are dark brown - that's a sign of a dirty watch.  You'll be able see what they look like when they're cleaned later. 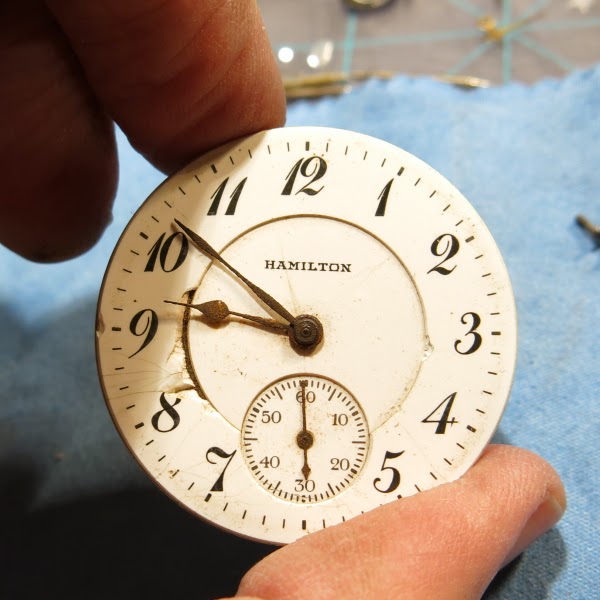 With the dial out of the way you can see the the main plate is in decent shape.  This negative-set movement has springs to keep the watch in the setting position until the crown (and stem) is pushed in.  Pushing in the crown overcomes the springs and moves the clutch up and against the winding pinion so the watch can be wound.  When you pull the crown out, the springs move the clutch back down to the setting wheels - as shown below. 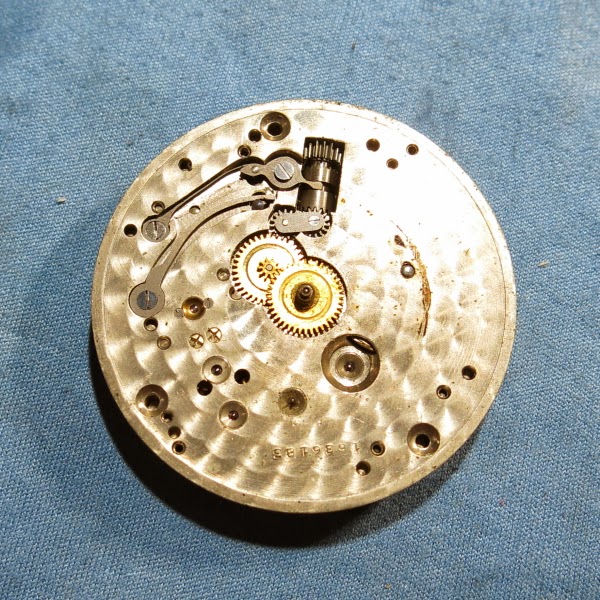 The first things off are the hour wheel, cannon pinion, minute wheel and the two setting wheels. 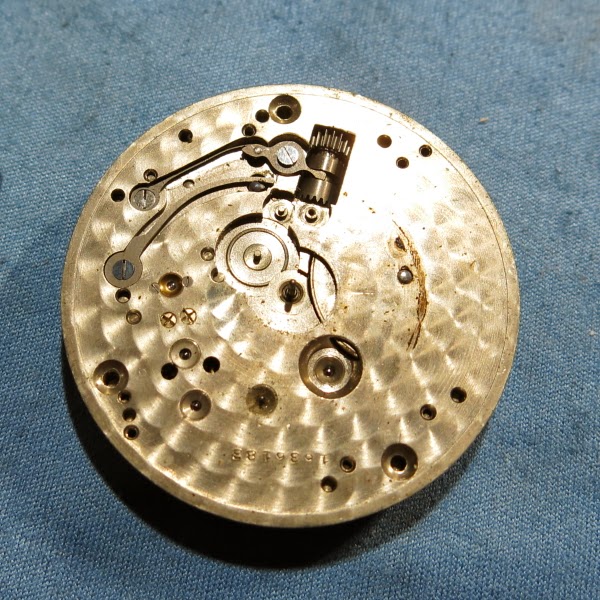 Now I'll flip the movement over and put it in my movement holder.  Since the mainspring is broken, there is no tension inside to release and I can just take it apart without worrying about breaking anything by the mainspring rapidly unwinding. 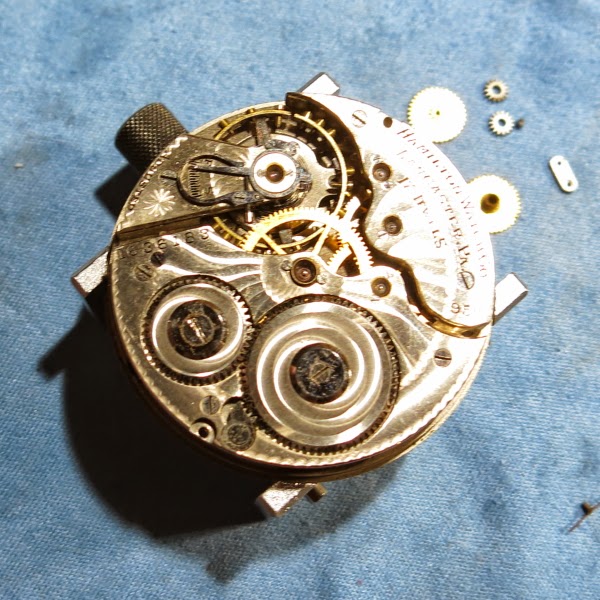 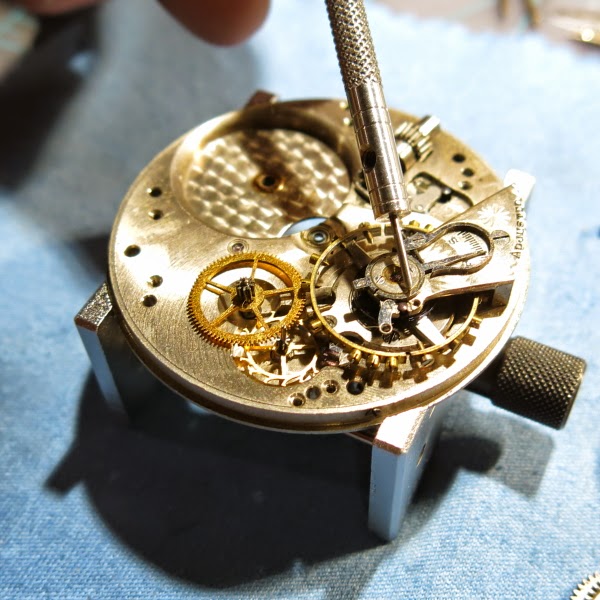 Both balance pivots are in place, which is good - otherwise I would need to replace the balance staff.  The upper pivot (left) is a bit dirty.  You can see this is a single roller balance design.  The roller table is the disc-shaped part on the right that holds the pink impulse jewel.  Double rollers were used on the more expensive models and helped protect the balance from over banking if the watch was jarred accidentally. 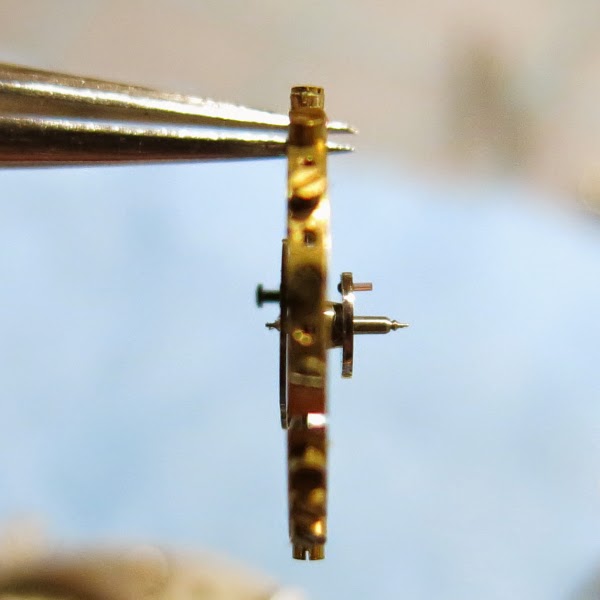 Opening up the barrel allows me to see where the mainspring broke.  You can see the break occurred right at the start of the first coil. 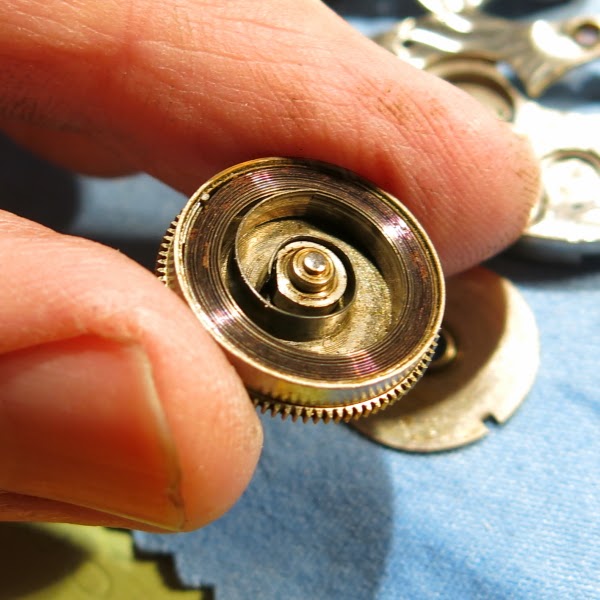 The rest of the spring is "set" so I would have replaced this spring even if it wasn't broken. 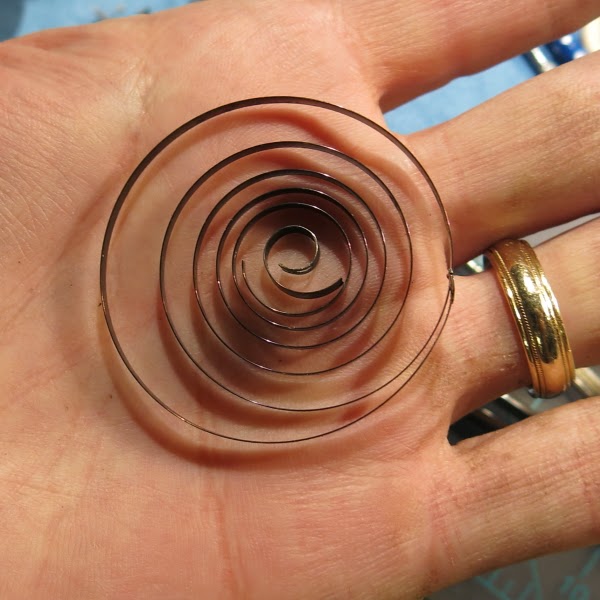 All the parts are cleaned and dried.  I'll have to order a new mainspring but I happened to have an old one that I could use for now. 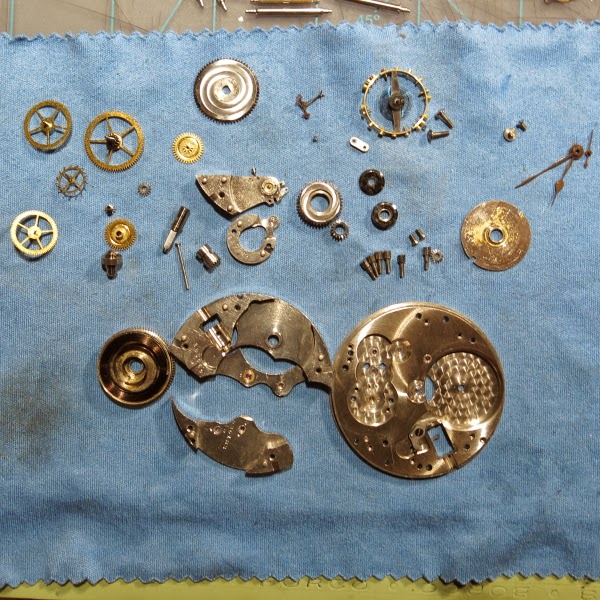 The first things back on are the escape wheel, fourth wheel and the pallet fork.  The escape wheel doesn't appear to be steel - that's another difference between the 956 and it's more expensive siblings. 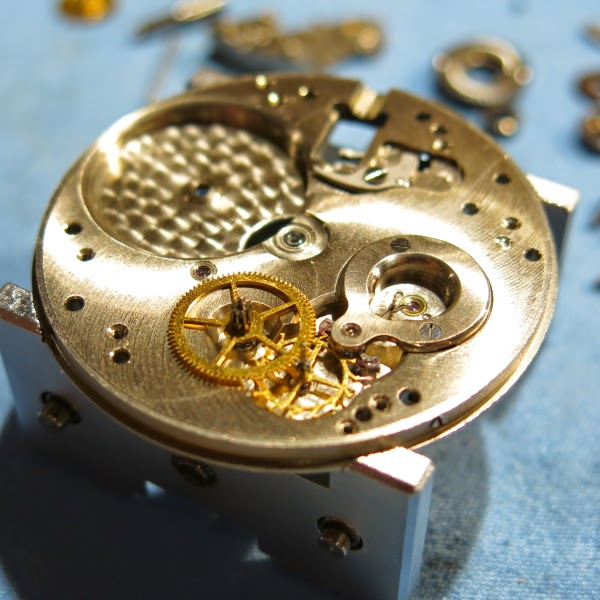 With the escape wheel and fourth wheel covered by the train bridge, the next things to go on are the third wheel, center wheel and barrel assembly. 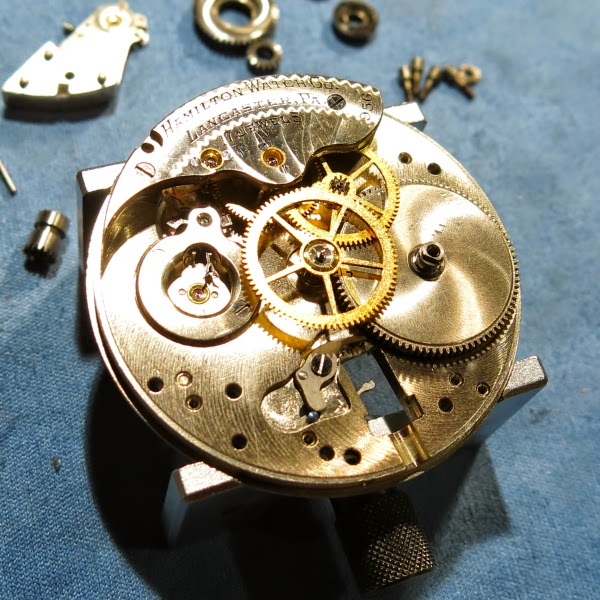 Before I put the barrel bridge back on I need to lubricate, reassemble and install the keyless works.  There are four parts; a rod that goes through the center, the clutch, the arbor and the winding pinion. 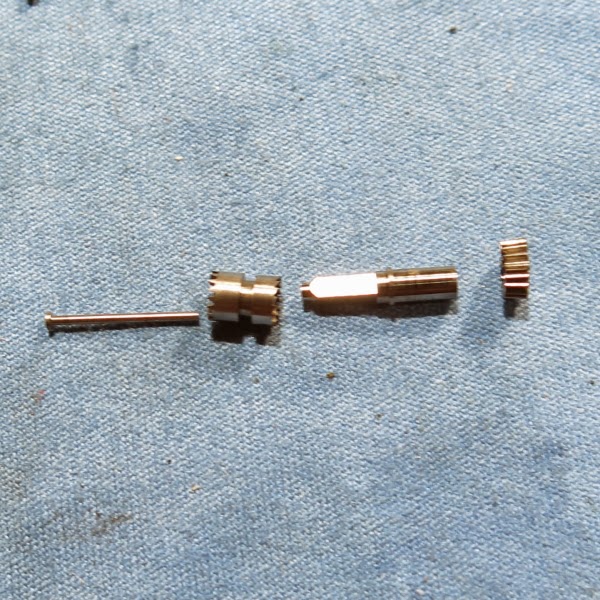 Here is the assembly ready to go back in place. 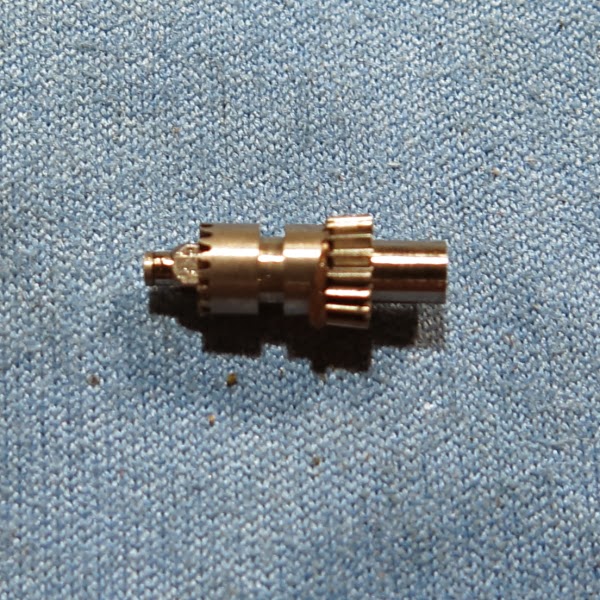 With the barrel bridge back in place I can wind the watch a little and get it ready for the balance to go back on.  If all goes well the watch will start running when I get the balance in place. 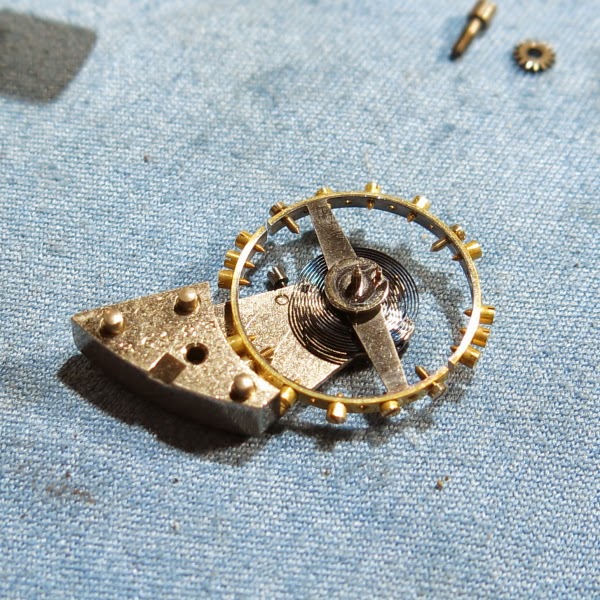 Success...  the movement is off to the timer.  Notice how clean and bright the jewel settings are now? You can tell this is a clean movement. 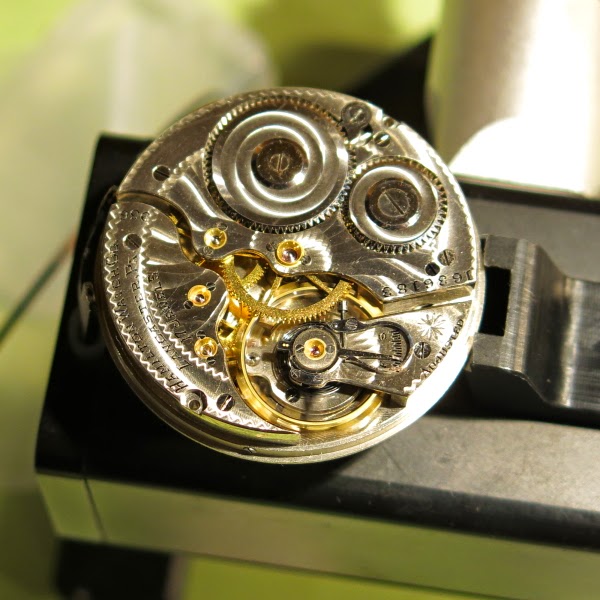 Well, the amplitude is a little low at 159 degrees.  That's probably due to using an old mainspring.  It will go up when I put in a new mainspring.  The beat rate of 15 seconds fast per day is okay but the beat error of 6.9ms need to be corrected.  I'll have to pull the balance assembly and rotate the hairspring to better center the impulse jewel in the pallet fork. 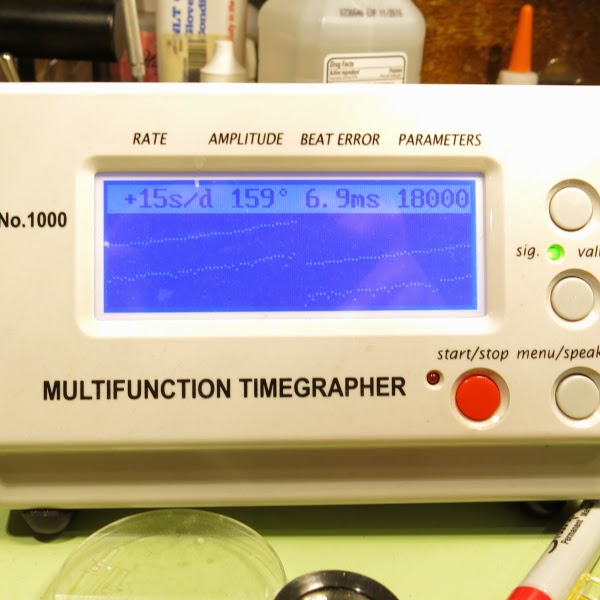 Ah... that's much better.  I like to see the beat error under 3ms and the closer to zero the better. 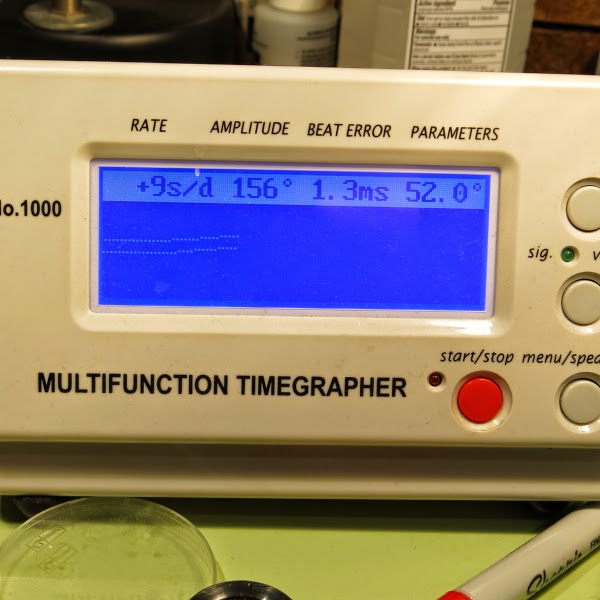 A new dial and better hands go on and the freshly overhauled movement gets installed into my railroad case.

Technically this is a bit of an oddball.  A 956 should probably be in it's original gold filled case to be totally proper.  However, this isn't a high end $900+ pocket watch so, who cares if it's not proper? 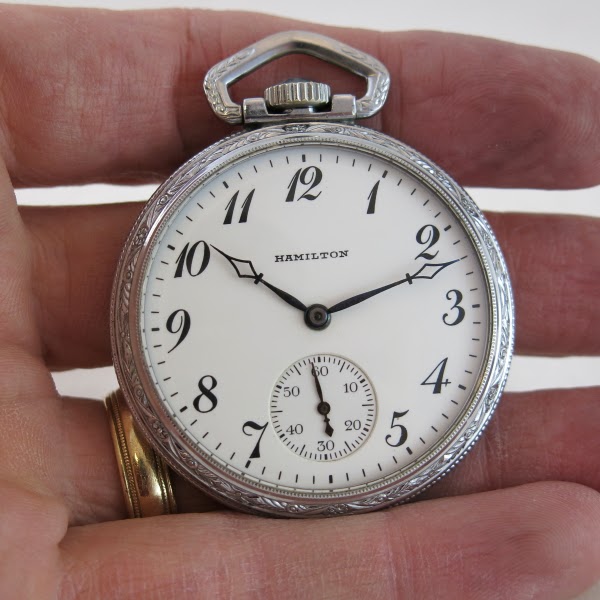 And here's a shot of the back... with the little train that started this entire journey. 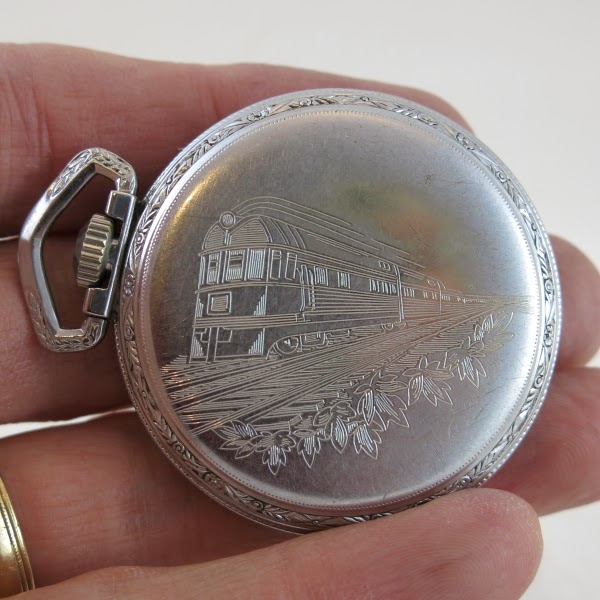 To be totally candid, I went about this project the wrong way... starting with an empty case and finding a movement and all the necessary parts for it.  Starting from scratch like that is a costly proposition, especially when there are other parts to buy... like a dial, hands, crystal, crown and stem /sleeve like my watch needed.

When you buy a loose movement, you don't really know what issues you're going to face.  In fact, I recently purchased a loose 21 jewel 992 movement that was described as "dead accurate" by the seller.  He was half right - as it was dead and had a seriously broken lower balance jewel.  Fortunately I know how to fix such things.

My advice when buying a pocket watch is to get one with a nice case, nice dial and nice hands - then it's just a matter of getting it to run well.

Here's a shot of the finished project happily purring away inside it's new home. 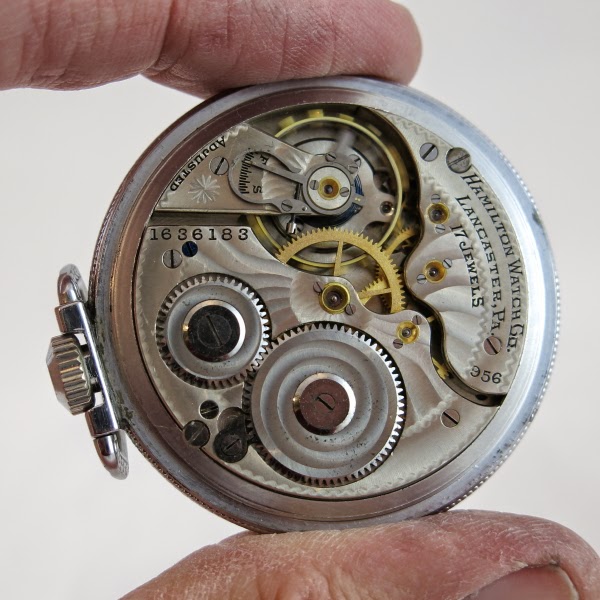 So I ordered a new white alloy mainspring... 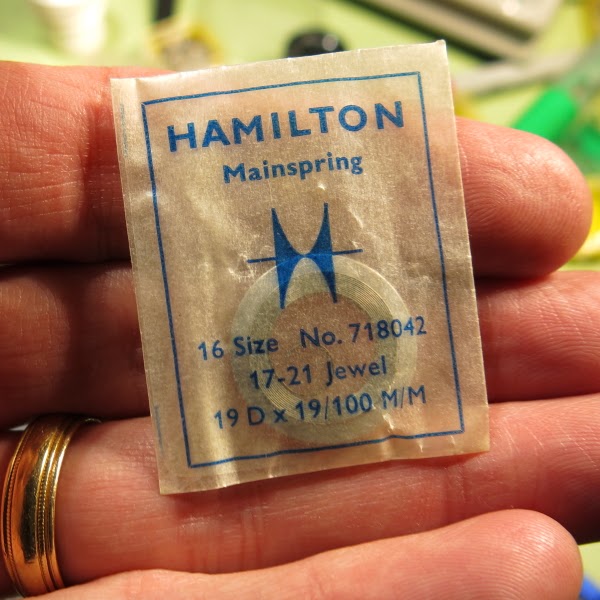 Installing these large mainsprings is always a nail-biting experience.  They really pack a wallop if they unravel on you but I was able to slip it into the barrel on the first try.  I'll give the mainspring a  dollop of grease before I seal up the barrel 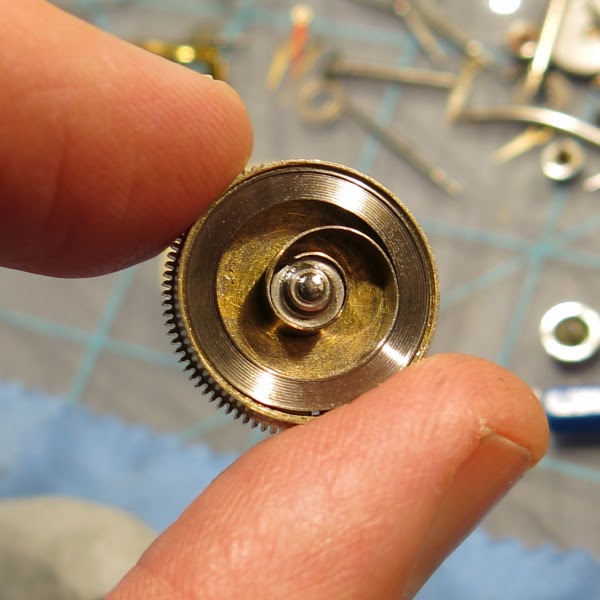 Well, it actually took a while for my timer to register the amplitude and a fresh mainspring yielded another 20 degrees of swing.  Normally I like to see the amplitude be north of 200 degrees.  I suppose I could use a lighter oil on the balance pivots but to be honest, this watch runs 40+ hours accurately on a full wind.  So what's there to complain about? 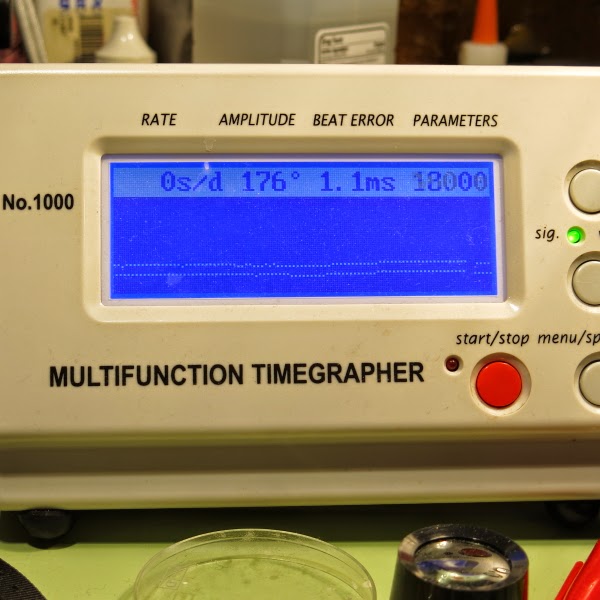