The 1950's and 1960's were a very difficult time in the US watch industry.  Post WWII Europe was still recovering and the Swiss and German watch companies of the 1950's produced high quality watch movements with very low cost labor compared to the United States.   Then in the 1960's the Japanese companies created even more competition.

Hamilton's Swiss-made movements were produced by ébauche makers like ETA and A. Schild.  An ébauche is a partially assembled movement that is sold to another maker to finish.  That's why you'll see the same basic Swiss grades in several different watch manufactures cases.

Swiss movements also allowed Hamilton to offer basic, entry-level models at a competitive price point.  I guess that is why Hamilton was the last US-manufacturer to close it's US operations.

Anyway, not all Swiss-based models were entry level.  Some came in solid gold cases and although not as expensive as some of the top-of-the-line models, they were not inexpensive.  Take for example the 1962 Thinline 2003.  It was produced for two years.

The Thinline 2003 came in a solid 14K yellow gold case.  The one-piece case design has an engraved bezel in what I have heard described as "florentine style".  As my wife would say, "it's sparkly".

Tucked inside is a Swiss-made Hamilton 687 which was made by Buren.  Hamilton was in the process of acquiring Buren around this time and Buren also made the micro-rotor movements used in the Thin-o-matic line.

I recently picked up Thinline 2003 because I liked it's hidden lugs design.  It's surprising large too - it's a solid 35mm in diameter.  That's "big" for vintage watch. 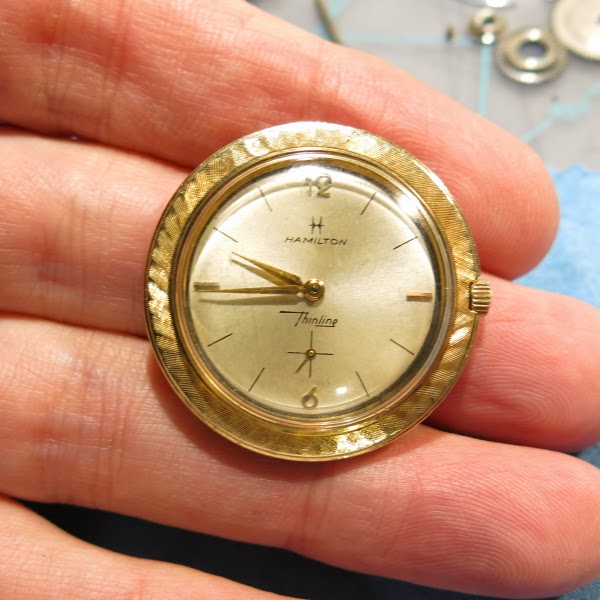 Reflections on the dish-shaped case back make it look a little odd but it's in very nice shape overall and all four lugs are strong. 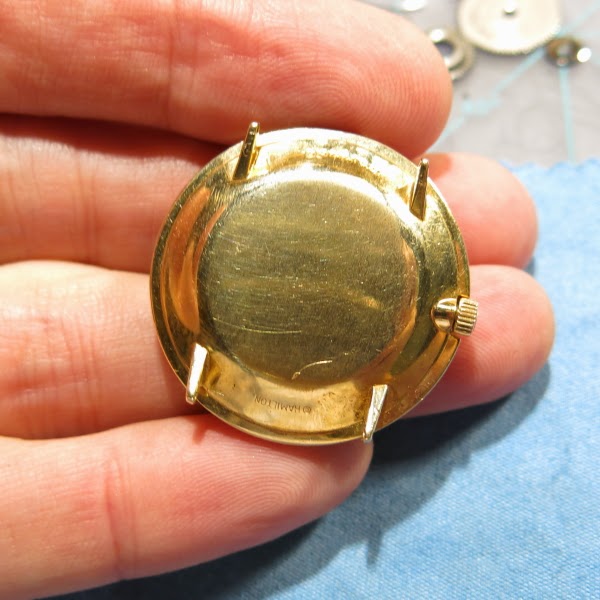 The crystal is taller than I'd expect for such a thin design.  This watch has such a low profile hand set up I think a lower dome crystal would look better.  However this crystal also has a reflector ring so it requires a special crystal. 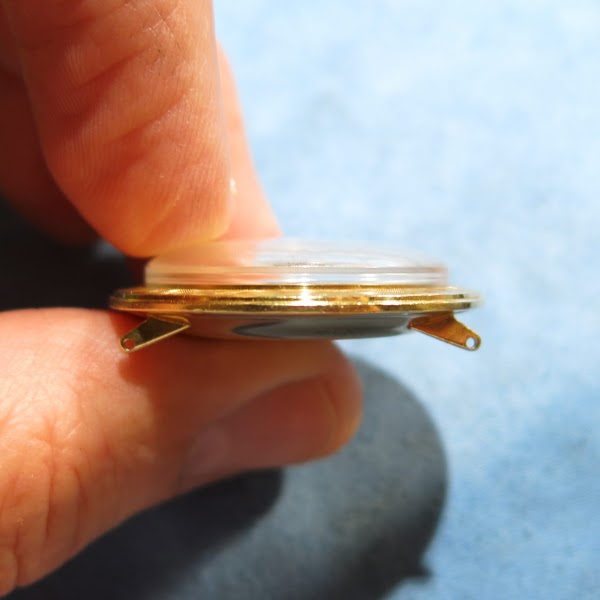 The case opens through the crystal and thanks to a two-piece stem the movement will come out the front once the crystal is removed. 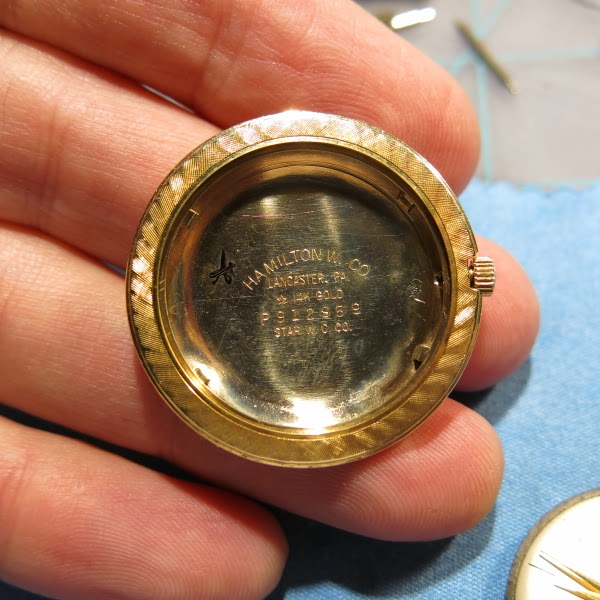 The dial is in good shape, a couple of minor spots here and there but nothing too distracting, which is good because getting this dial redone correctly would be difficult I bet. 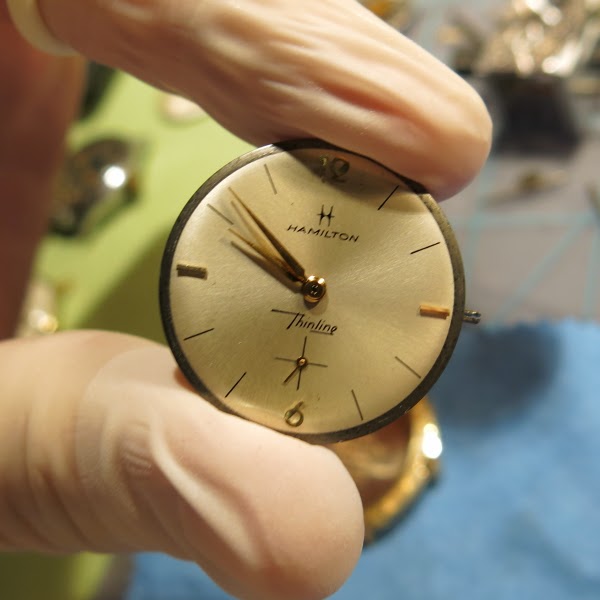 Although there are a few service marks inside the case back, the movement is rather dirty and ready for an overhaul. 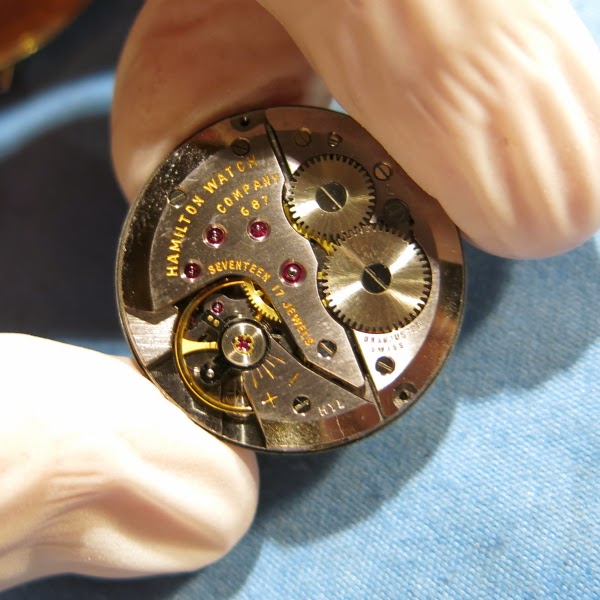 Here's a shot of the gold reflector ring.  It goes inside the inner circumference of the crystal and on top of the dial when it's installed. 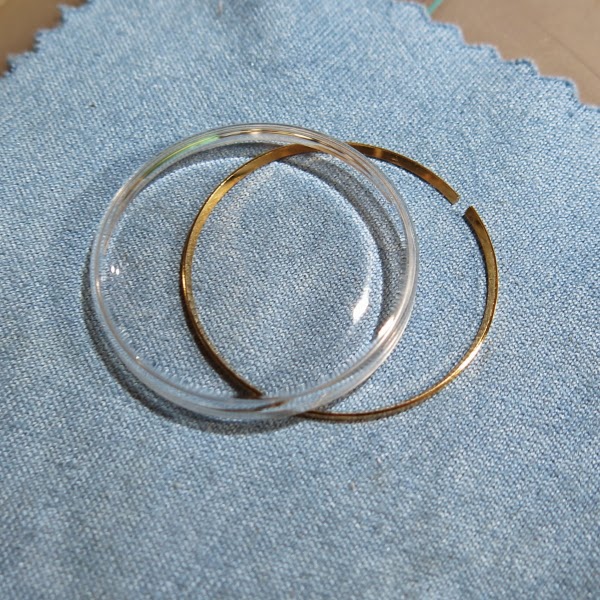 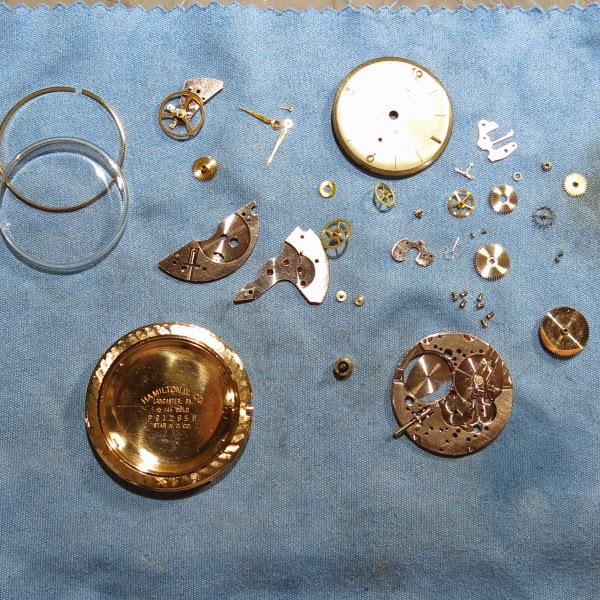 The movement is so thin that the axles for the wheels are very short.  That actually makes reassembly of wheels much easier.  You need to get all four lined up at the same time but the axles are so short they tend to stay in the right position much better than longer wheels do. 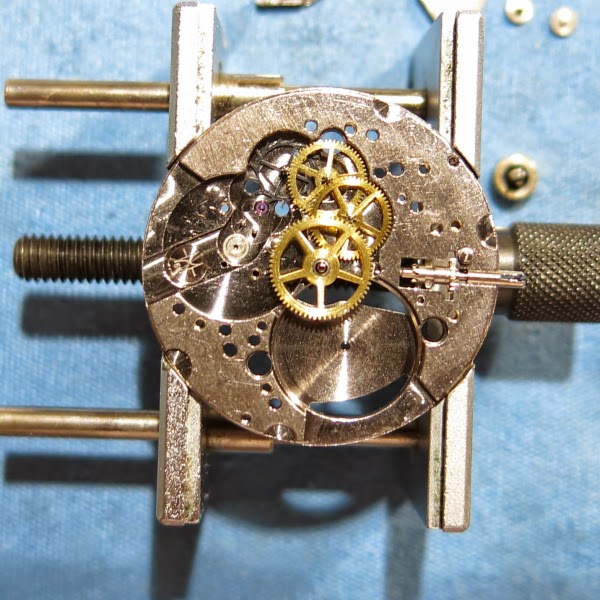 With the train bridge on, all four wheels spin easily.  Next on is the pallet fork.  It's easy to install too, thanks to it's equally short arbor. 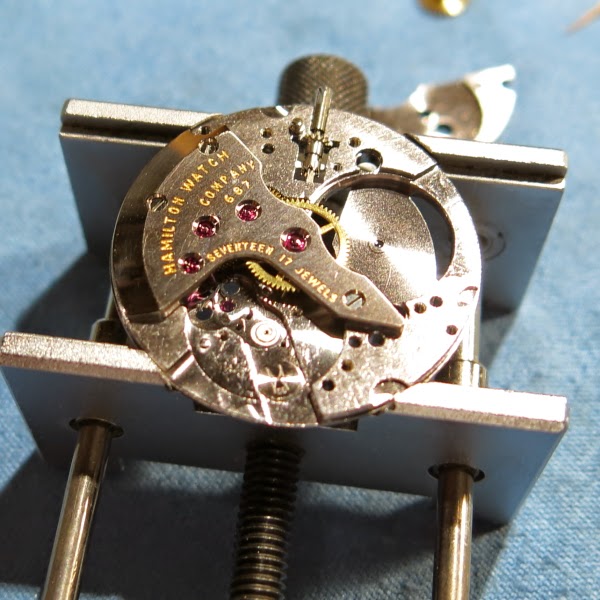 Now the mainspring barrel can go in and the barrel bridge on top of it. 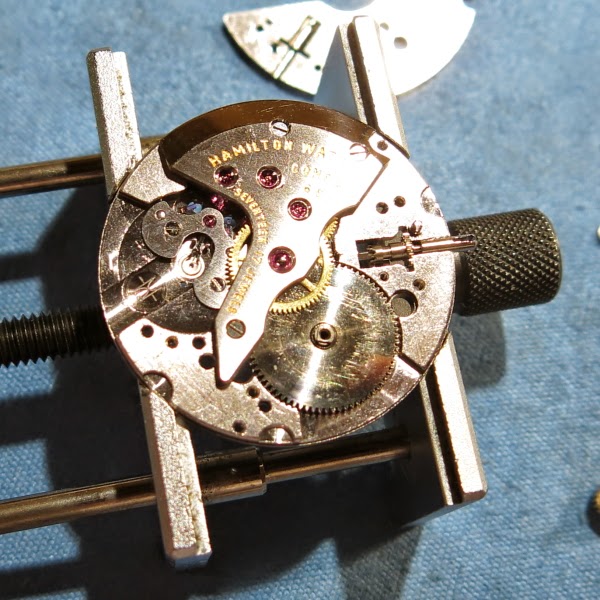 With a few turns to the mainspring the watch is loaded with energy.  Now it's time for the balance assembly to go back on. 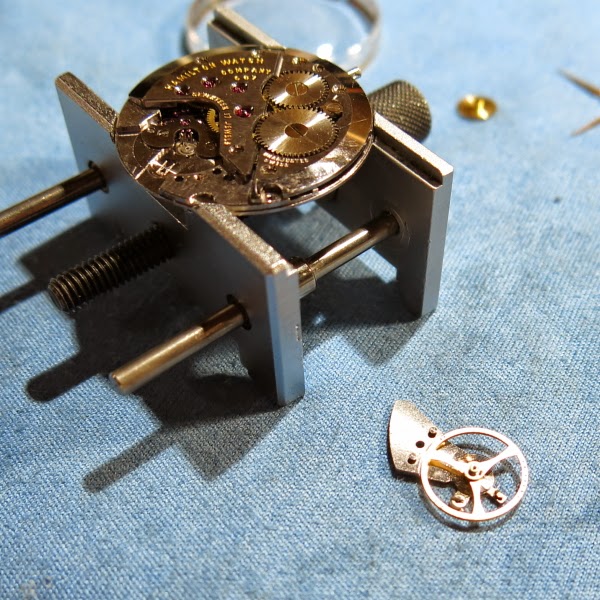 It's off to the watch timer now to see how it's running. 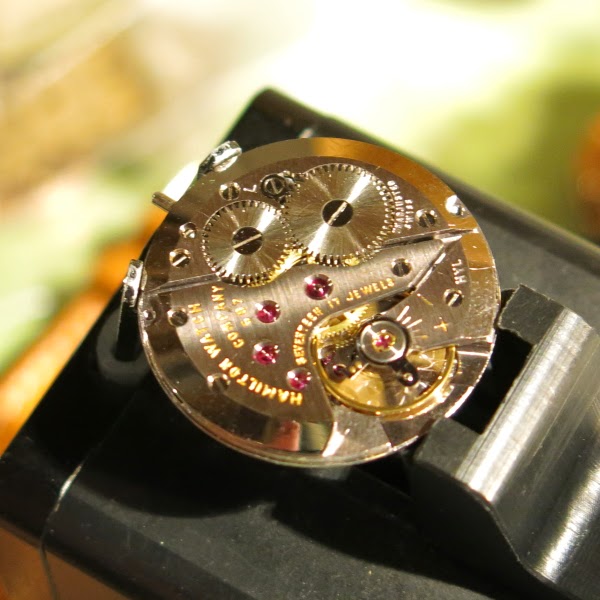 Well, it's not too bad, a little fast but the beat error is too high. 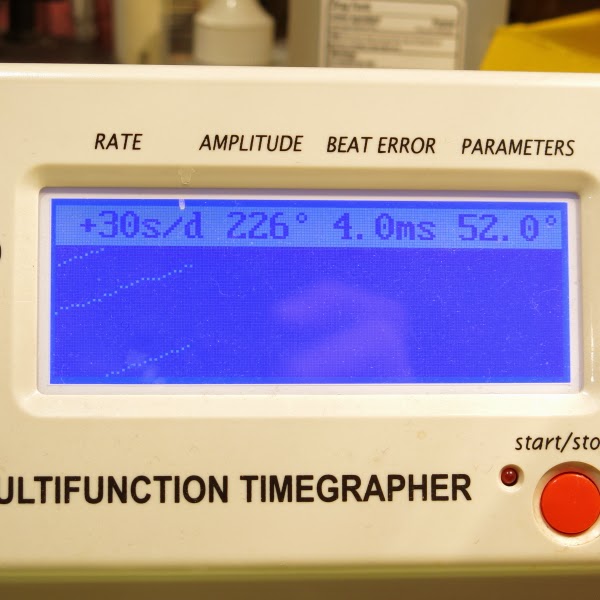 Fortunately the beat error is very easy to adjust so with a little tweaking I can bring everything right in line.  Nothing too shabby about this watch's performance. 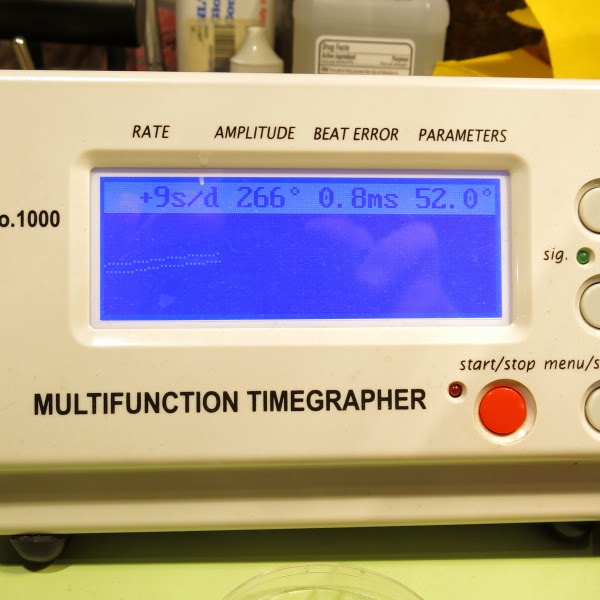 A new genuine croc strap is the perfect compliment to this rejuvenated Thinline 2003.  My camera makes the dial look a little more spotted by the 12 and 6 than it really is.  It looks great here but it's even better in person. 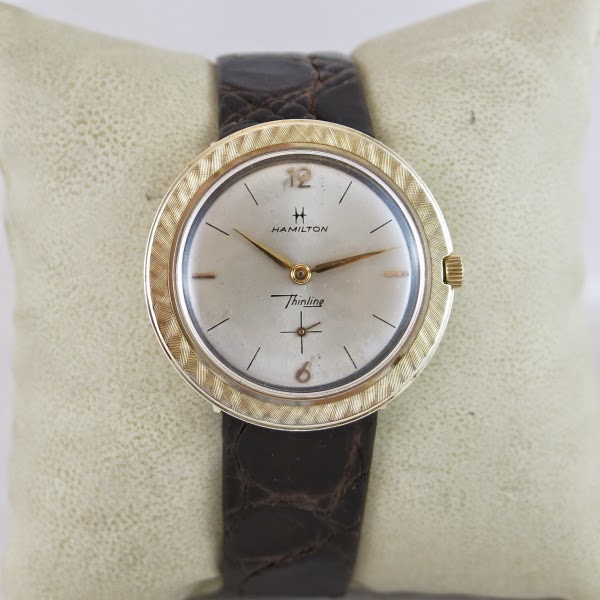