There are 83 different Thinline models but only two of them are solid 10K gold.  One of them is the 1960 Thinline 3000.  It was produced for only two years. 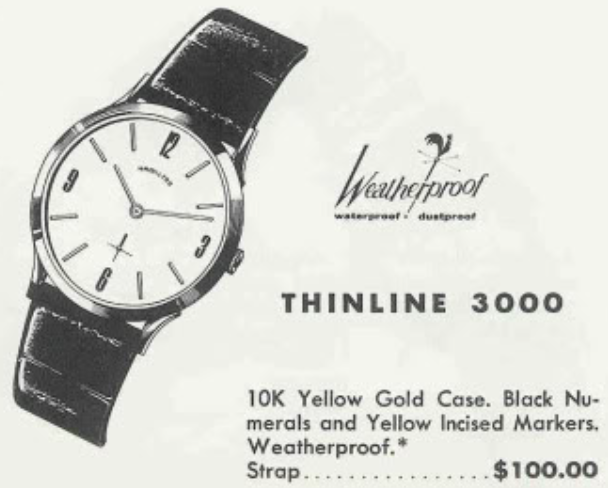 The 1961 catalog showed the Thinline 3000 was "sold out", so maybe it was only available for one year? 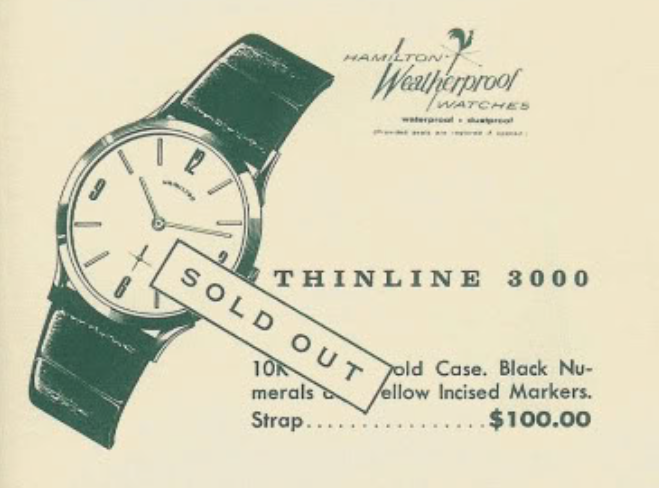 I haven't seen too many Thinline 3000s in the wild but I have seen movements with the dial fairly often - indicating the watch was scrapped for gold.  : (

I recently landed a Thinline 3000 project watch and upon close inspection it looked pretty good.  The dial has a slight tone near the three, indicating that water has gotten past the crown and affected the dial.  The black numerals are uniquely shaped with a very thin font. 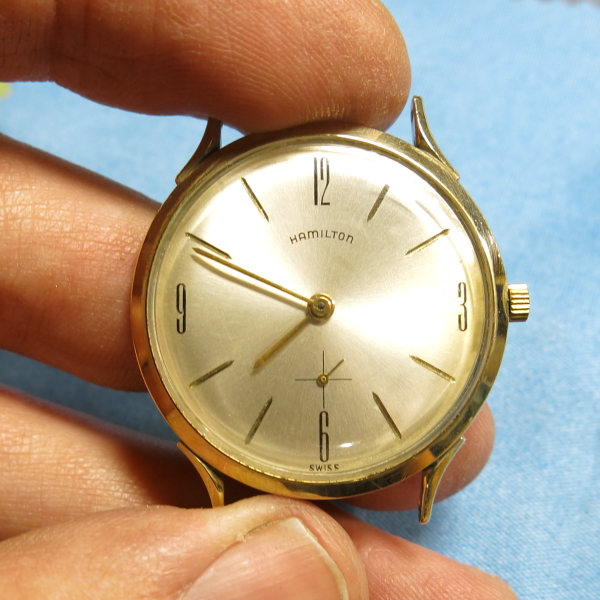 The watch has a one-piece case and opens through the crystal. 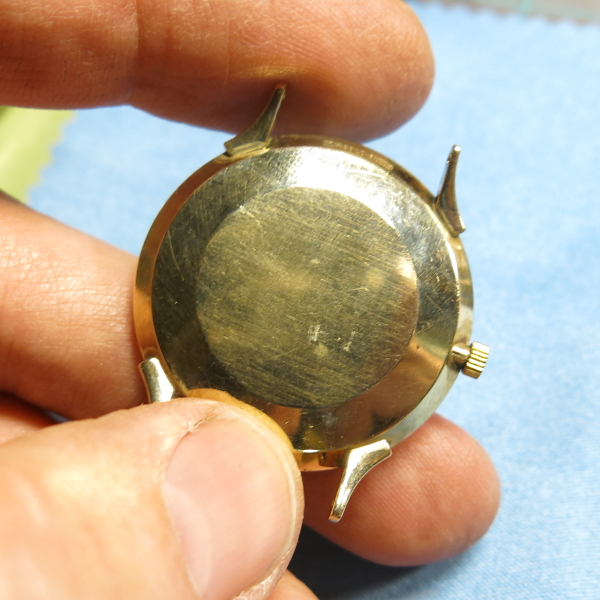 This watch really lives up to the Thinline name - it's extremely thin. 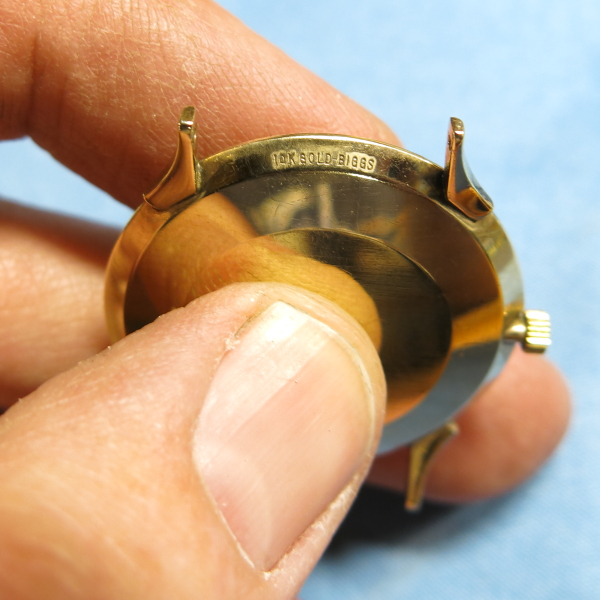 Inside is a 17 jewel 676 movement.  You don't see this movement anywhere other than in a Thinline. 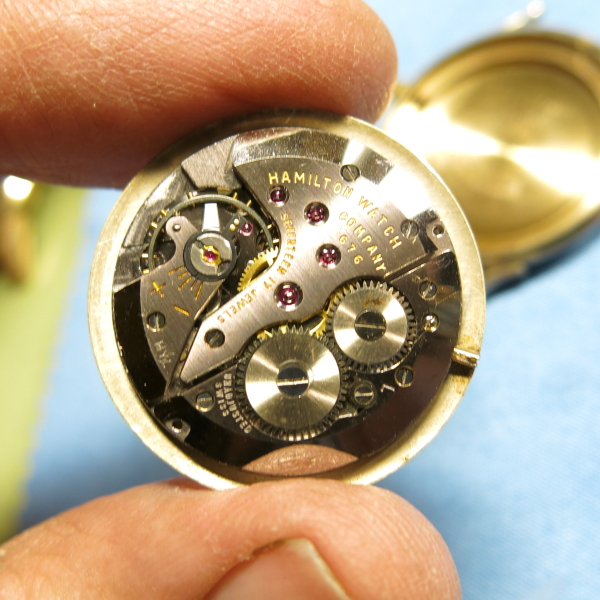 The inside of the case has a couple of watchmaker's marks.  One of them is a simple "15". 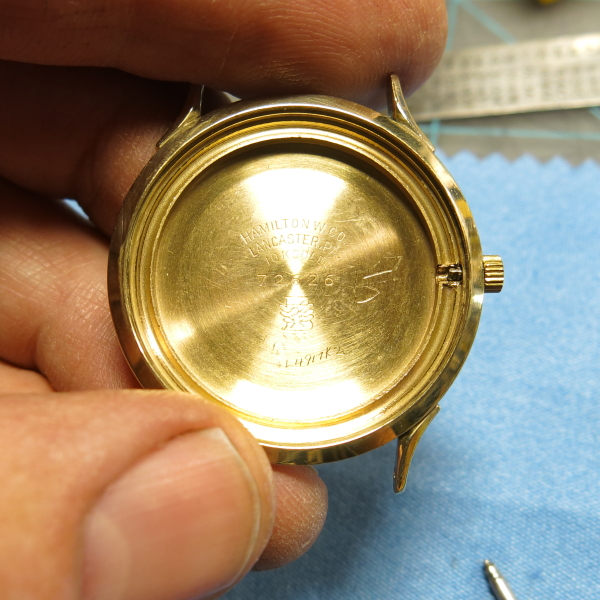 Oddly enough, once the dial was removed, I saw "15" scratched into the manipulate too.  You can see the 5 in the photo below. 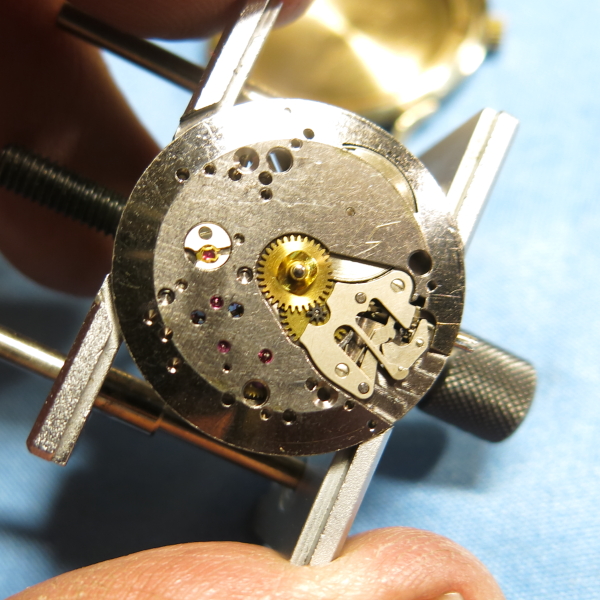 There's a lot of extra oil under the barrel bridge.  In fact the overall movement looks clean but feels grimy. 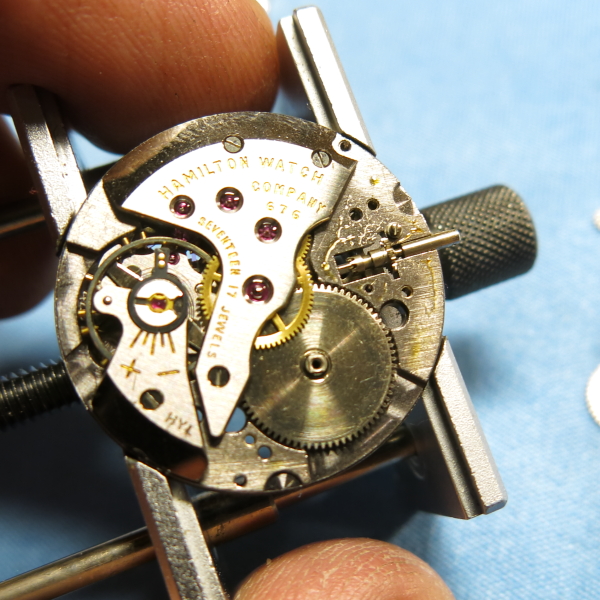 The Hamilton 676 is based on an Aurore 4201 ebauche.  The shield logo with an AV inside indicates Aurore 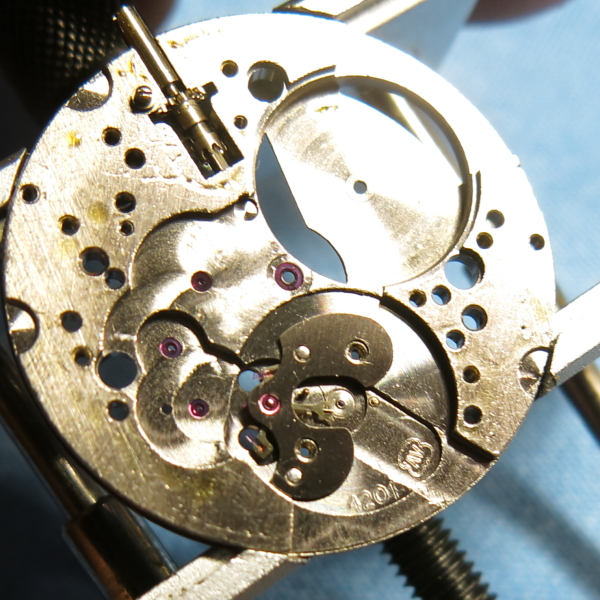 All the parts are cleaned and ready to be reassembled. 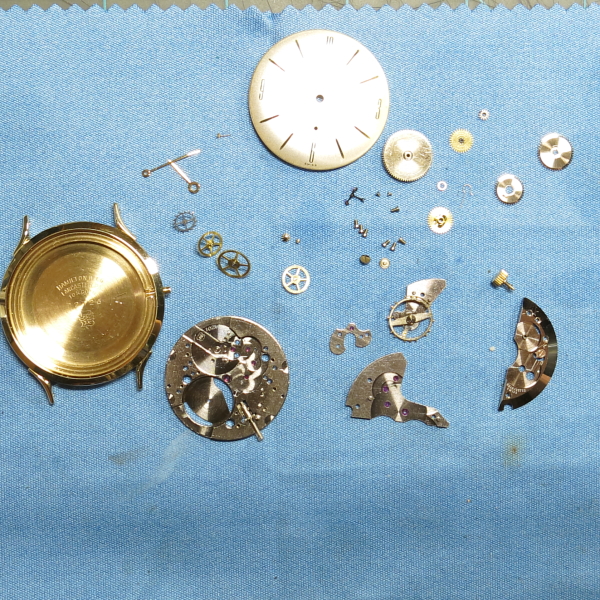 Everything is reassembled and running.  It looks okay to my eye but the timer will tell me for sure how it's running. 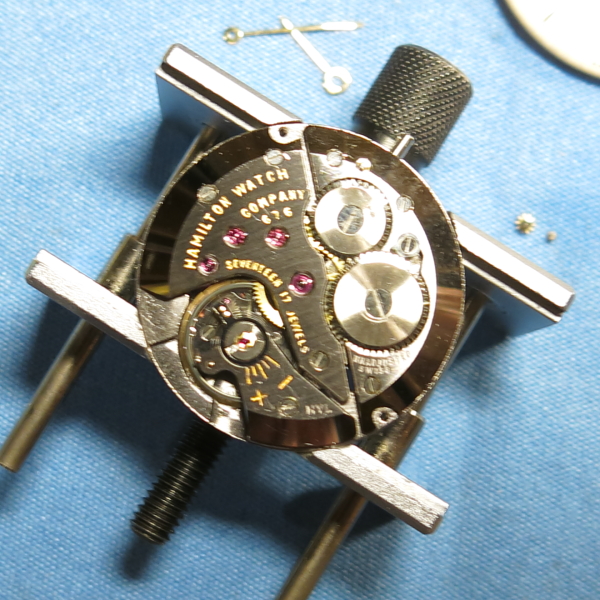 It's running a little slow and the amplitude is low but I only wound it a little bit. 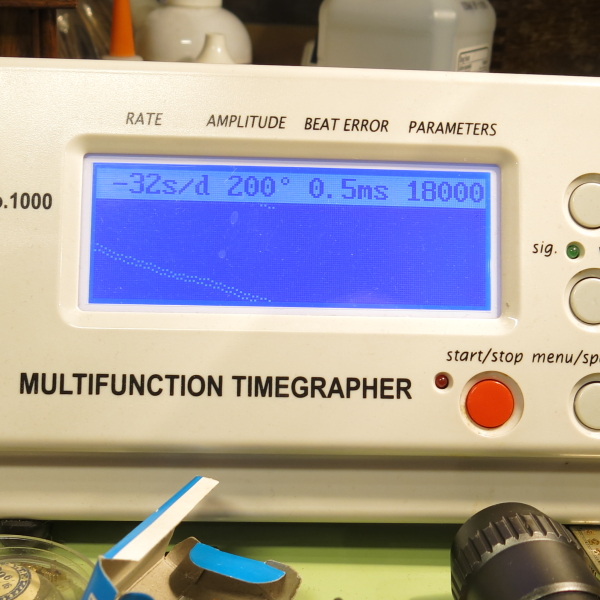 I wound it more fully so the amplitude increased.  The regulator index is very finicky... I could get it to run a little fast or a little slow but the sweet spot proved illusive.  I'll leave it a little fast for now. 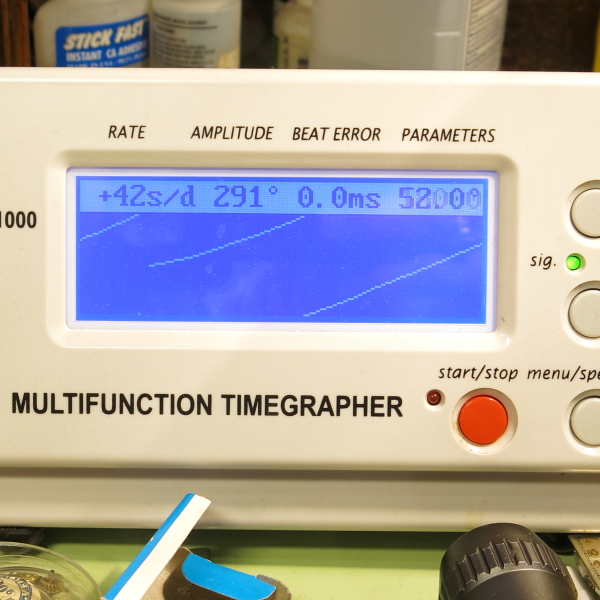 I'll put a new low profile crystal on, as the old one was a little scratched up.  30.6mm should do the trick. 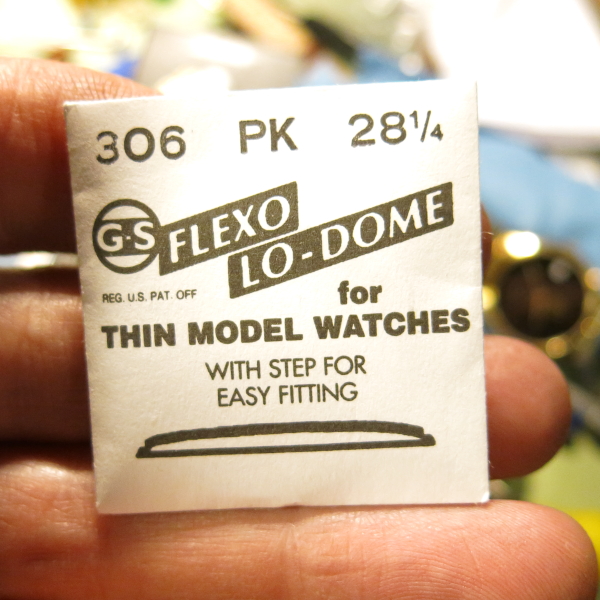 A nice genuine alligator strap completes the overhaul of the watch.  My merciless light tent exaggerates the yellow tone near the three on the dial.  It's not that obvious in daylight.  The dial is a radial finished pattern and I'd be hesitant to try to get it refinished. 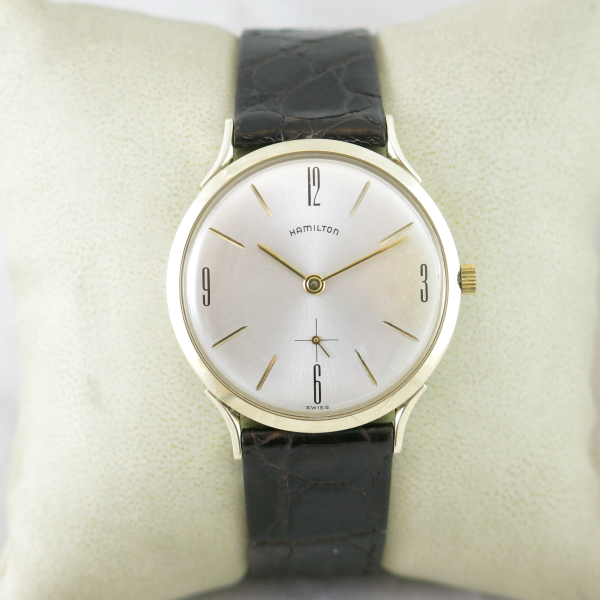