Having posted the 1950's Cabot the other day, it reminded me that I haven't talked about the earlier version of the Cabot yet.  Released in 1935 with the debut of the "new" 14/0 sized movements, the original Cabot was produced for four years.

Once the 982M (medallion movement) was introduced (in 1940 I think) the 982 went into gold filled cases too, depending on the model.

Like other models from this period, the Cabot came with either an applied gold numeral dial with solid gold numerals or a black enamel dial.  The latter is less common, but still relatively easy to find.

I wonder if the Cabot was the inspiration for the Boulton?  The Boulton was released in 1940 and a modern version is still being made today!

The Cabot is a nice looking watch, in my opinion, and I definitely like the look of the enamel dial - which was not available with the Boulton.

Here's a before and after of an AGN dialed Cabot to show you what a difference just cleaning the dial can make. 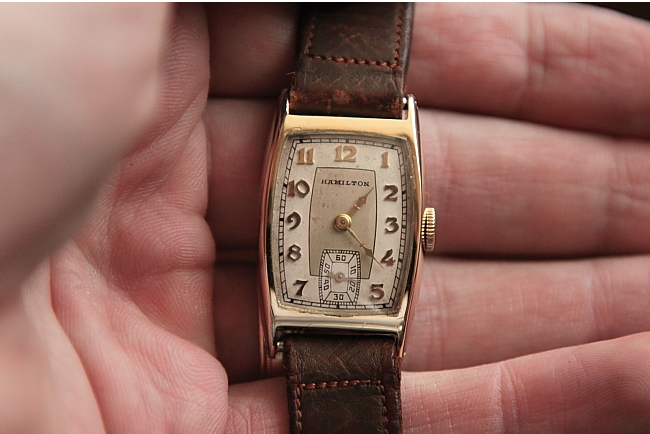 I think it's funny how what was originally dark became light and vice versa. These two toned butler / white finished dials are very striking.

Here's a wrist shot of my enamel dialed Cabot. 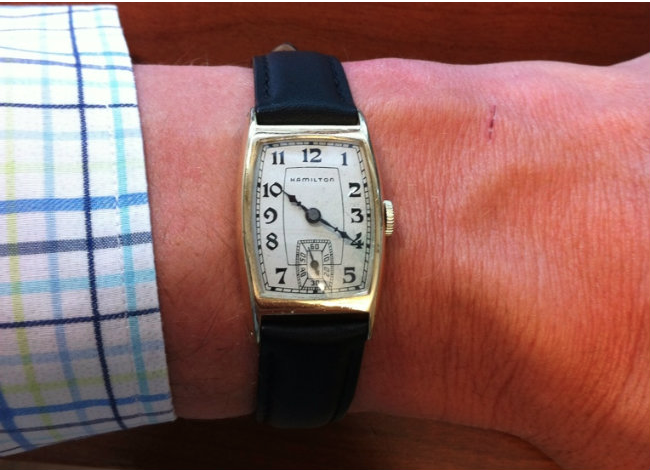 The style of hands is called "solid diamond" and I think they really look great.
Posted by HandyDan at 12:02 PM