It's interesting how Hamilton liked to name men's (and women's) watches with given names likes Foster, Rodney, etc. and although some common names were never used (example - David), other less common names were used more than once.  Sometimes the same name was used three times! 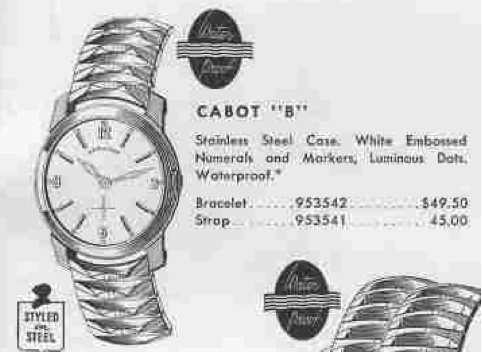 The Cabot B is a medium sized watch and a good size for a vintage watch.  It's a classic 1950's flying saucer design in my opinion with a simple, clear dial in a stainless steel, "waterproof" case (assuming the gaskets are in good shape).

Sometimes a B was added to a watch model when the movement was changed from it's original design.  For example, the Boulton was first produced with a 19 jewel 982 movement and when the 982 was replaced by the 19 jewel 753 movement, the watch was renamed the Boulton B.

However, the Cabot B is a little bit of an oddity - as it was introduced as a B model but then dropped it after the first year and was just called the Cabot.

I recently had an opportunity to service a Cabot B and thought I'd show you how it went.  This is a pretty detailed step by step explanation so you can get a feel for what's involved.

As received, the watch was in decent shape overall.  It looked a little noisy on my timer and it's owner said it stopped occasionally so it was time to be serviced.  Like your car, mechanical watches need to be serviced every few year to make sure the parts are clean and properly lubricated. 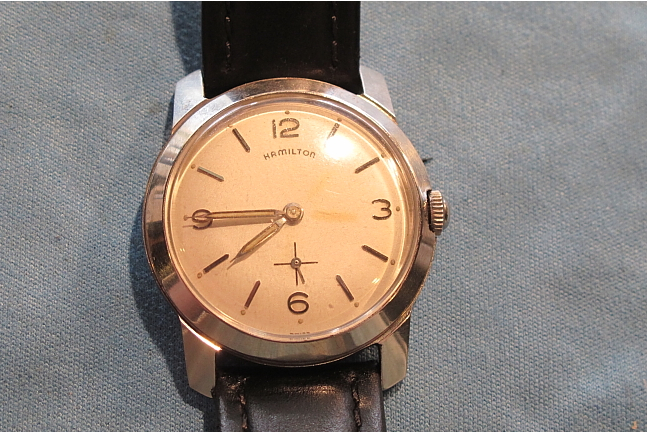 This watch opens through the back - which I was happy to see, as often these "Swiss" Hamiltons open through the crystal and have a split, two-piece stem that can be a challenge to separate. 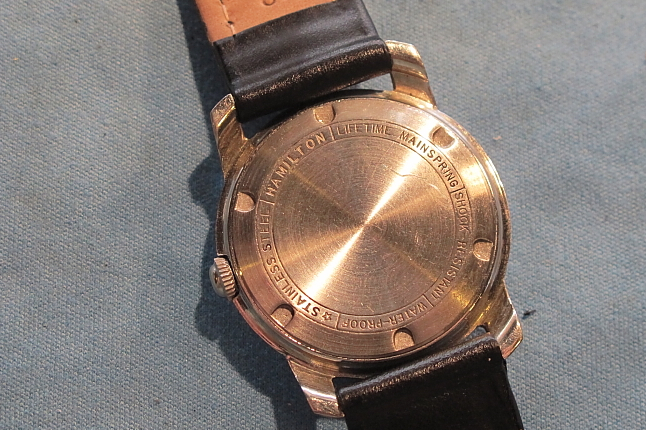 With the back opened up, everything looks good - including the gasket (green).  The one thing I was really surprised by though was the presence of an Illinois movement inside.  I was expecting a Swiss made 673 movement.  So, I bet the Cabot B has an Illinois movement and the Cabot in 57 and 58 has a 673 - but that's a total guess on my part.

To get the movement out all you need to do is loosen the little screw just below where the stem enters the movement.  You can see it on the left side of the watch movement in the picture below.  A couple of turns loosens the screw.  Then you pull out the stem.  Once the stem is out, the movement will come right out when you flip the case over. 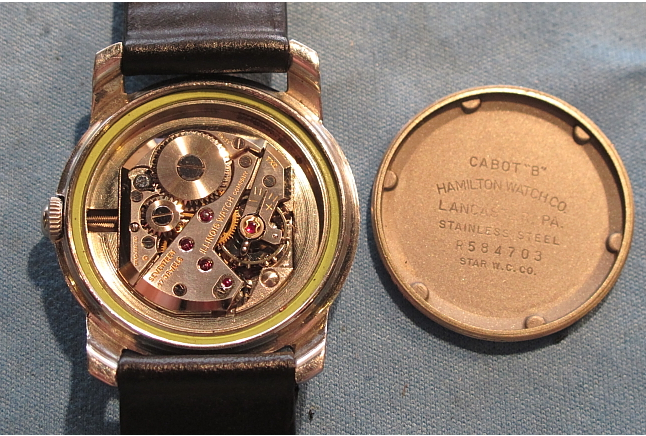 Once the movement is out of the case, I put the stem back in.  Then the next thing to do is to remove the hands and pull the dial. To get the dial off, you loosen two dial feet screws on the side of the movement.  Here's a picture of one.  The other took me a while to find - it's a smaller screw and on the side opposite the stem, near the balance bridge. 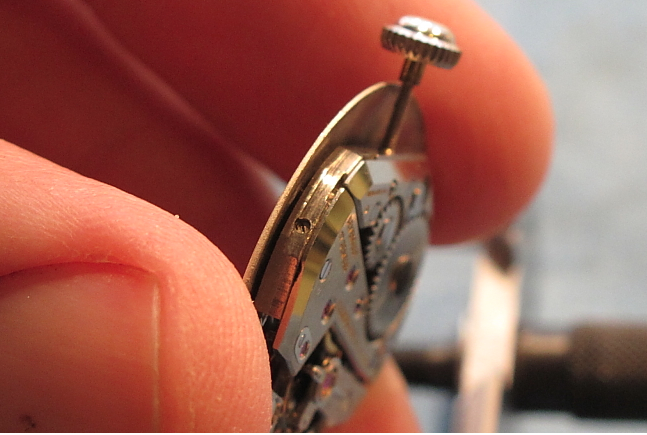 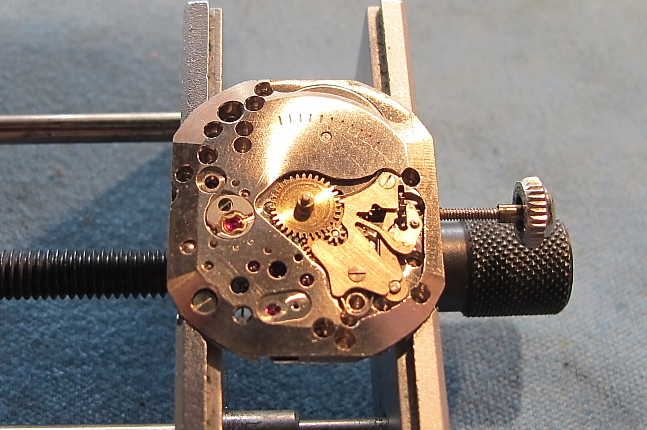 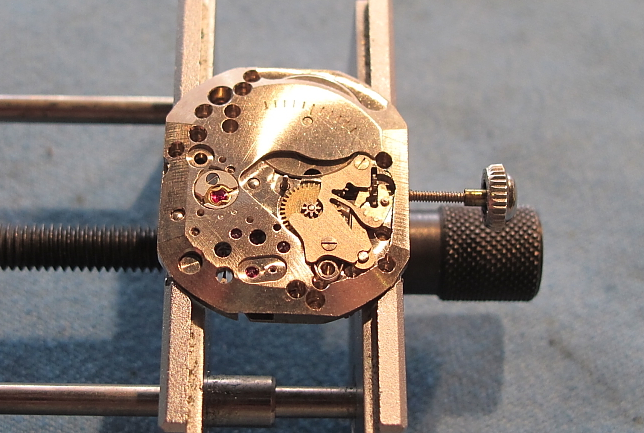 With the parts removed from the front, the movement is flipped over and the mainspring tension is let off.  This is an important step and must be done or you'll risk damaging the internal parts when you disassemble it.

The mainspring is underneath the larger winding wheel with the large-headed screw in the center.  Just to the right of the winding wheel is the "click".  If you hold the click open while you turn the crown & stem, you can let the spring gently unwind. 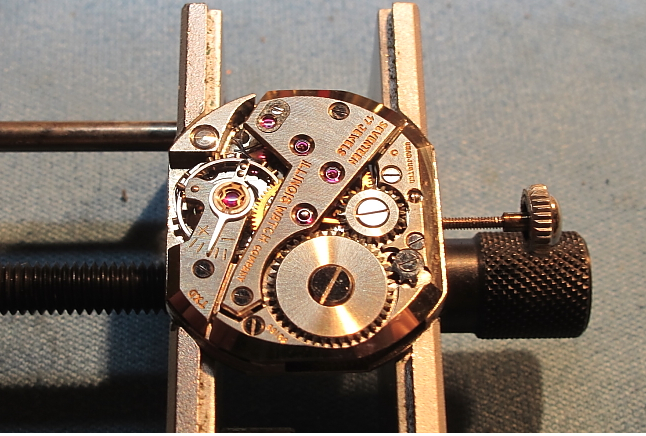 Next, all the screws holding the mainspring bridge and the train bridge can be removed in order to get to the wheels inside. 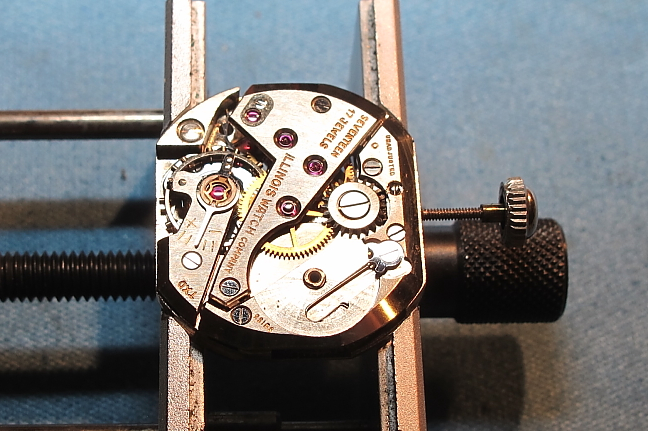 With the bridges removed, you can see the center wheel and third wheel have been removed (upper right in picture below).  The fourth wheel and the escape wheel remain, along with the balance.  It's easier to remove the last two wheels once the balance is taken off.  Just one screw is holding it on. 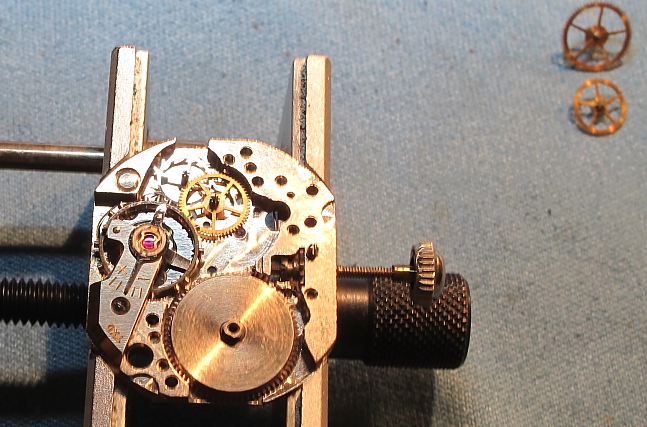 Now the balance is removed and it exposed the pallet fork and the bridge that holds it in place.

At this point you can also see this Illinois movement is made by ETA and is a 1220 movement.  The markings were under the balance. 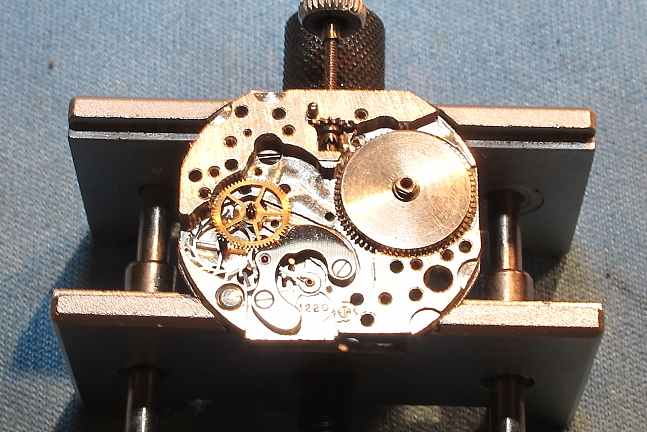 In this shot the main plate is fully naked and ready to go into the cleaner. 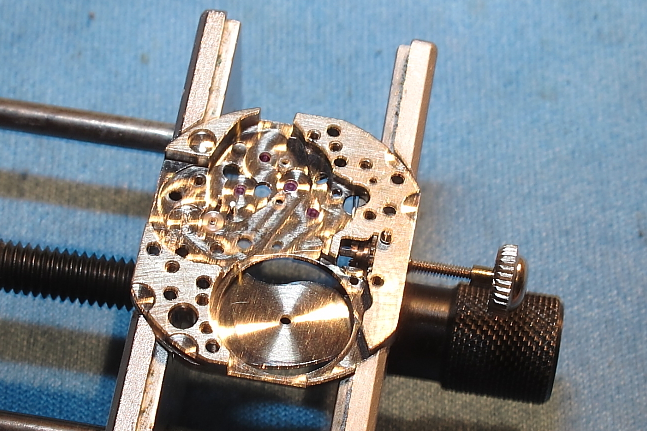 While the ultrasonic works it's magic, I'm able to give the case a little attention... polishing the crystal and bezel. 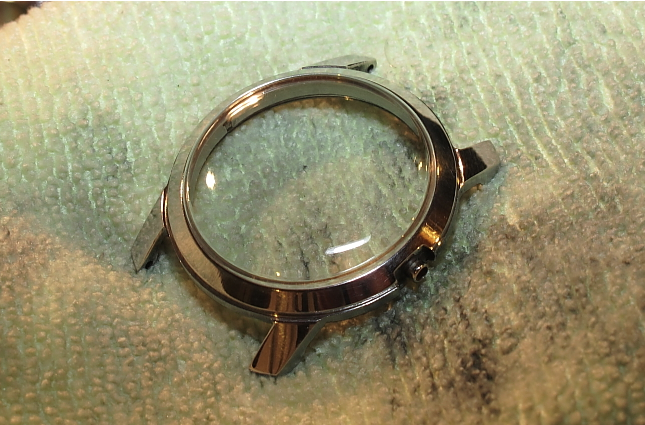 The dial shows what are called "radium burns" from the luminous material on the hands.  The watch probably sat for years at 3:07 and the dial was left with burn marks to prove it.  They're pretty much on there for good.  I will try to clean them off but usually they're not easily removed. 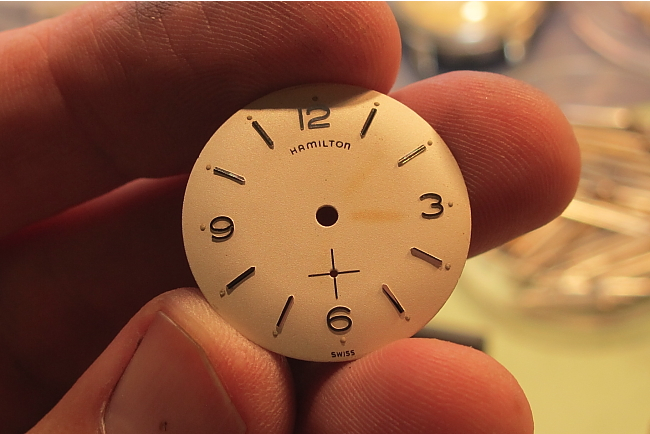 Here's a shot of everything cleaned and ready to go back together. 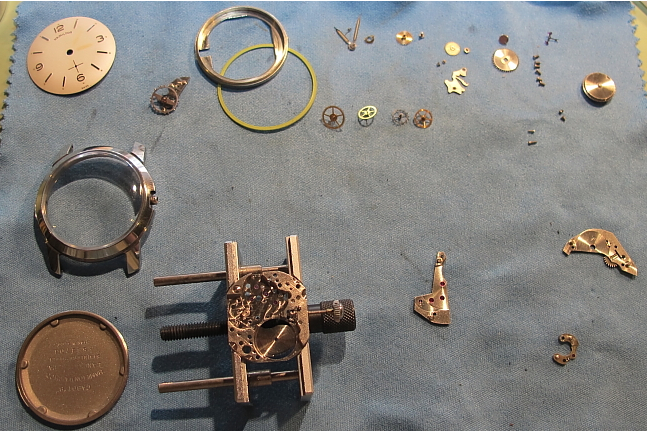 Here's the pallet fork getting ready to go back in.  In this shot you can see the ETA logo and 1220 more clearly. 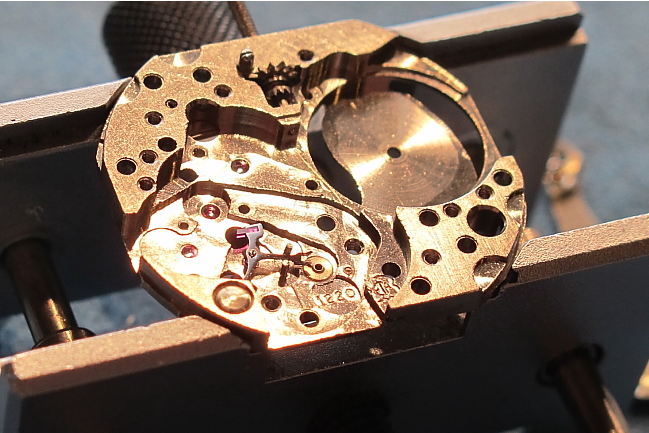 A bridge holds the pallet fork arbor in place.  You need to be very careful to get both pivots lined up before tightening any screws. 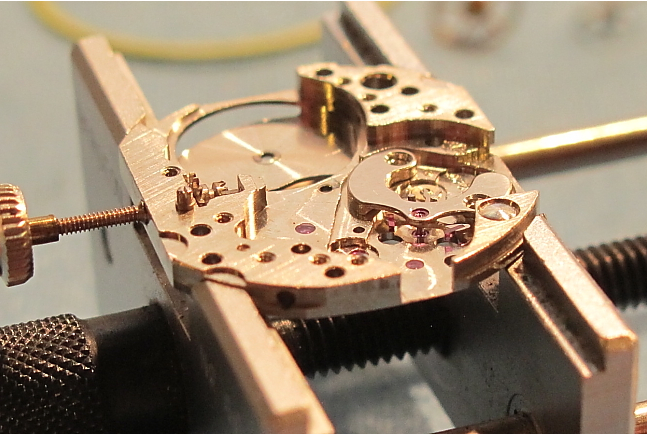 This movement is tricky to re-assemble.  It has four wheels all on a single bridge and getting them each lined up will drive you crazy if you don't have a lot of patience.  The mainspring barrel needs to go it at this point too. 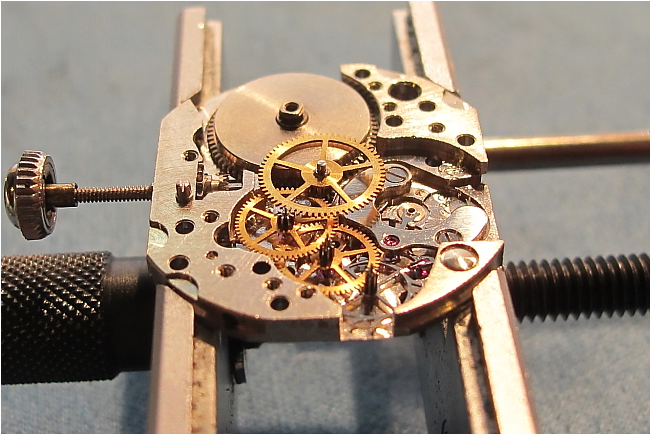 I put the mainspring bridge back on to help guide the placement of the train bridge. 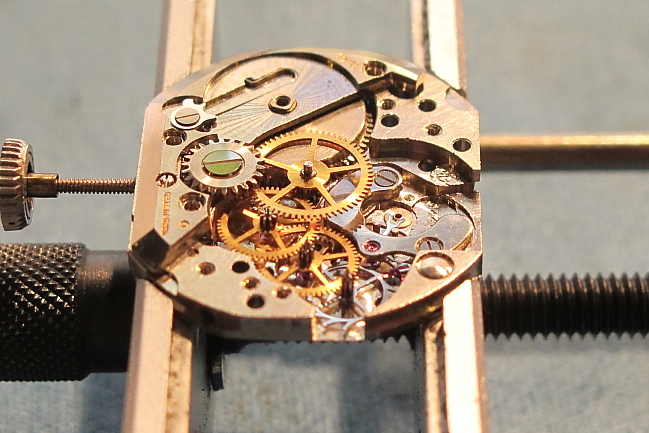 In the shot below, you can imagine what a pain getting all four wheels to line up might be.  They're lined up okay now but this is the angle from which you look at the wheels and poke around with tweezers until they get into place.  Sometimes you need a stiff drink of single malt when you're finished. 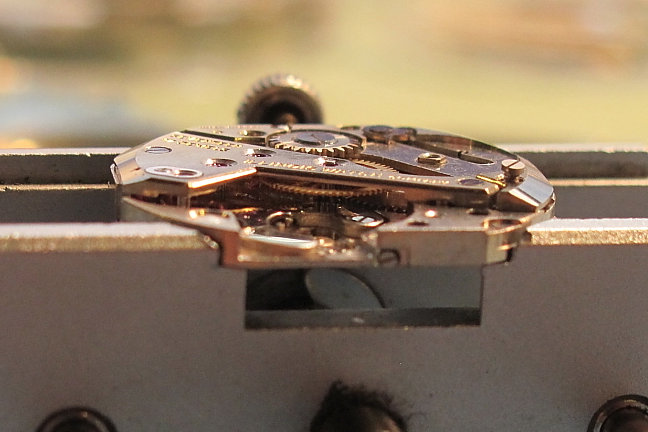 Now all the screws go back in as well as the mainspring winding wheel and it's screw. 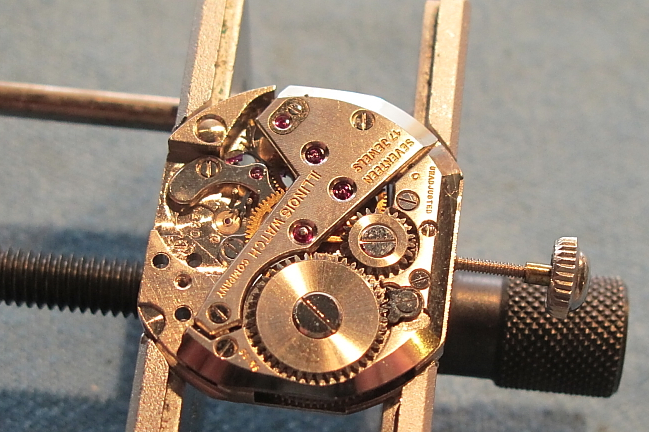 On the front, the keyless works (to wind the watch and set the time) are re-installed and lubricated. 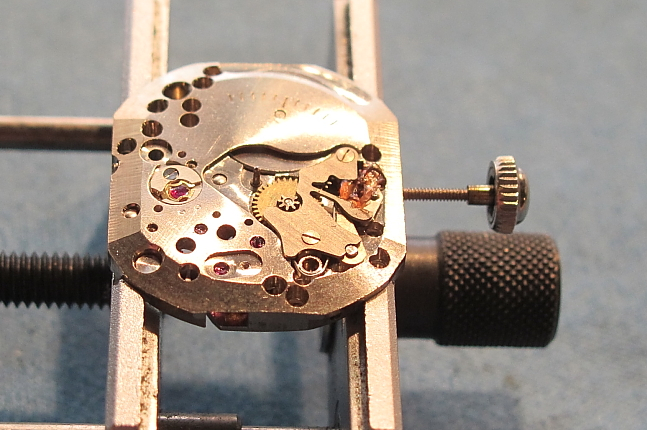 In this shot you can see the balance happily spinning away... rocking back and forth 5 times every second. 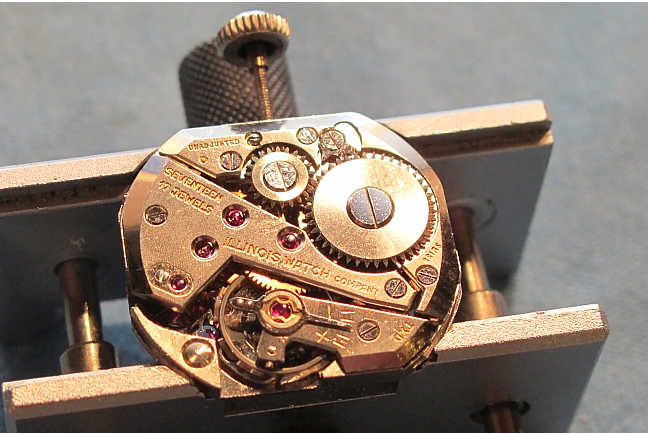 I always cross my fingers when I put a watch on my timer.  It has the ability to "listen" to the ticking in the watch and will tell me how well it's running.  I put this watch on my timer and it started out running about 70 seconds fast per day.  After some some tweaking I was able to get it down to 6 seconds fast per day... that's about as good as it gets, as the rate will change slightly as the watch unwinds, etc. 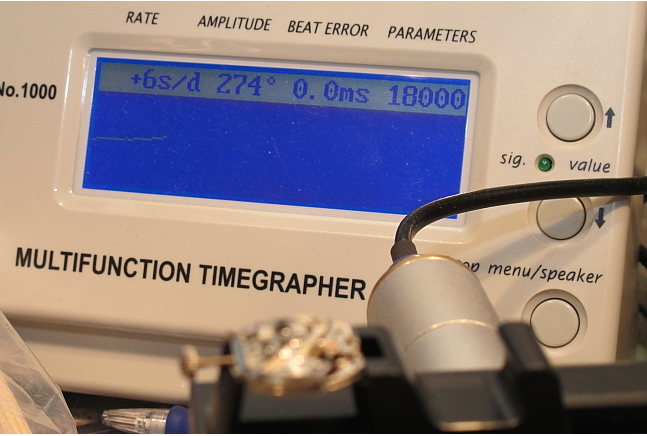 Now the dial goes back on, along with the hands. 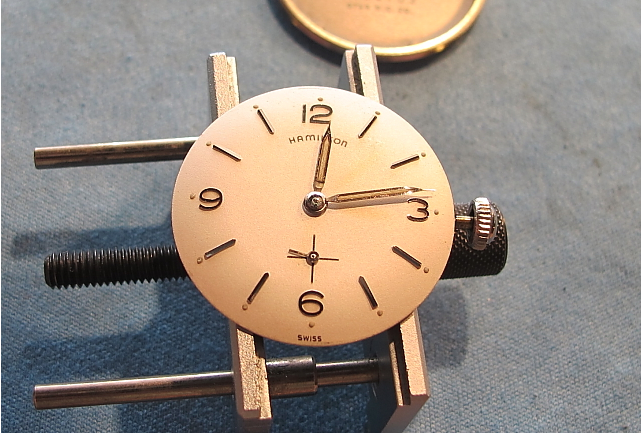 Since this is a water proof watch, I'll put a little silicone lubricant on the case threads and the stem tube to help keep things lubricated and water-resistant. 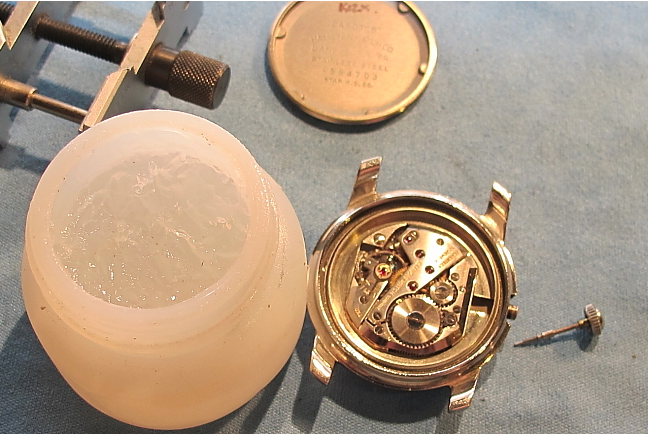 I enter a little "code" to tell me when this watch was serviced and this Cabot B is ready to be closed up. 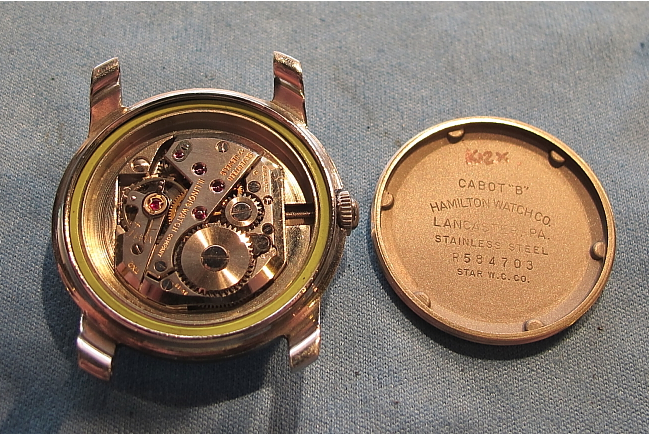 And here it is, all spiffed up, strap reinstalled and even the burn marks look a little better.  This Cabot B is ready for another 50 years of faithful service. 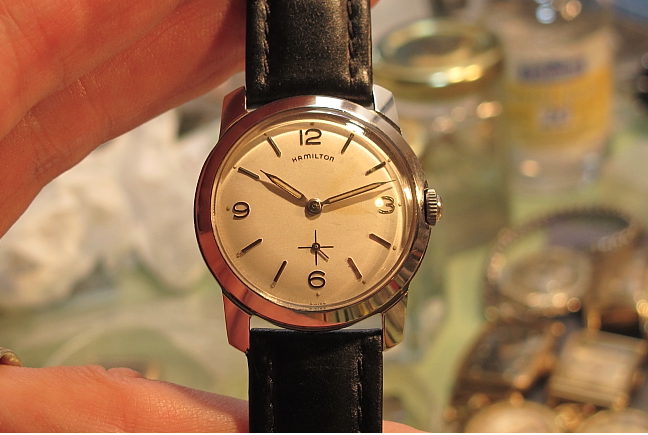