In 1955 Hamilton introduced several watches in the Stormking line.  By the end of the 1960's there were 11 different models ranging from the Stormking I to the Stormking XI - but they weren't all available at the same time.

Two models that had a relatively long production run are the Stormking IV and Stormking V.  Both of these watches look similar in their catalog drawings but in person there are some obvious differences.

First and foremost, the cases are different.  The IV has a yellow gold-filled case while the V has a stainless steel case. 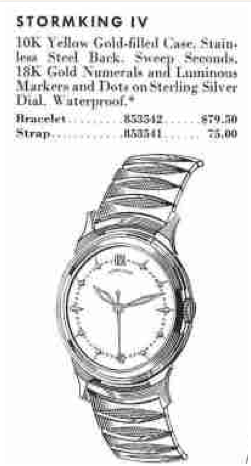 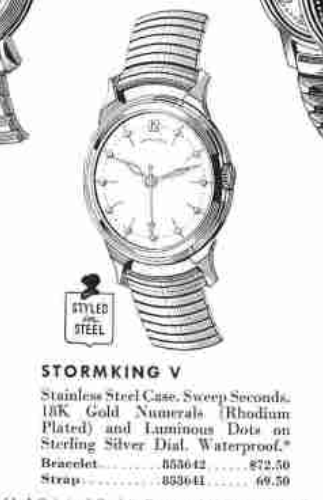 Both watches utilize Hamilton's US-made 8/0 sized sweep second movement; either the 18 jewel 748 or the replacement 18 jewel 735 introduced later on (with shock jewels).

One of the variants of the Stormking IV is a military version.  The principle difference in the military version is a special hour wheel so the hour hand moves half as far in 60 minutes - thus turning the 12 hour dial into a 24 hour dial.  So, when the little hand is on 6 and the big hand is on 12, it's 12:00 pm.

Personally, I would love to obtain a complete Stormking collection but several of the 11 models are solid gold and others are so rare you never seem to see them.  Anytime I see a Stormking come up for sale it goes into my watch list.

Here's a wrist shot of the Stormking IV.  I really like the look of the recessed crown on the side. 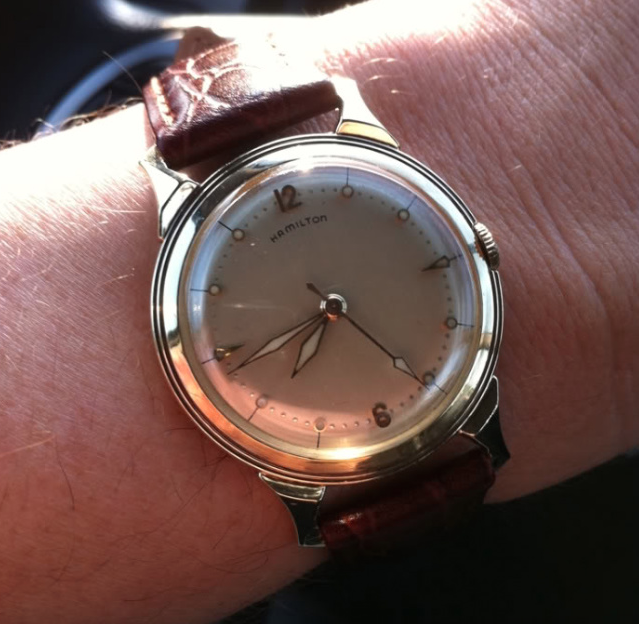 And here's a photo of a Stormking V I restored for a friend.  I wish I took a before shot of it, as it was a real mess.  The crystal was scratched up beyond hope and the dial was very dirty.  The crystal is an easy fix but the dial needed to be cleaned.  It was a refinished dial and the moment it got wet all the printing came off along with all the dirt.  It was a nice clean dial with no printing!

So I got it refinished again.  I think it turned out great.  I also relumed the hands, including the second hand.  This watch looks really cool in the dark with the hands glowing and all the hour markers too. 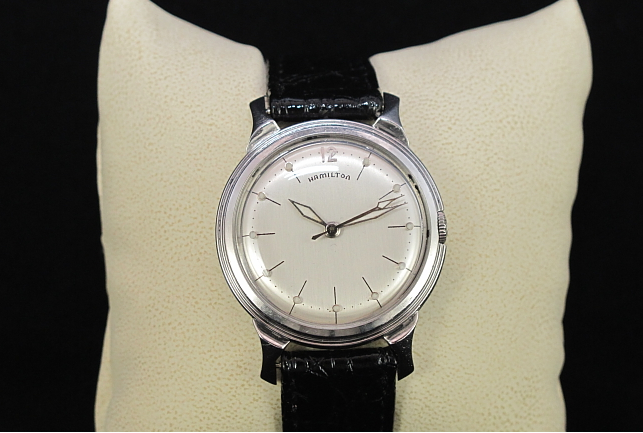 One of the interesting things about these Stormking models is they have two sets of spring pin holes in the lugs.  In other words, the strap (or bracelet) can be mounted in two different places within the lugs.  I'm not sure what that's all about, but it's an interesting bit of Stormking trivia.
Posted by HandyDan at 5:59 PM