The first Hamilton men's wrist watch hit the Hamilton catalogs in 1916.  Only one model was offered, the "Wrist Watch for Men", and it warranted only a description.  Wrist watches were viewed as feminine accoutrements.  But the trenches of WWI would prove the wrist watch's utility and any concerns that they were solely for the fairer sex were quickly put aside. 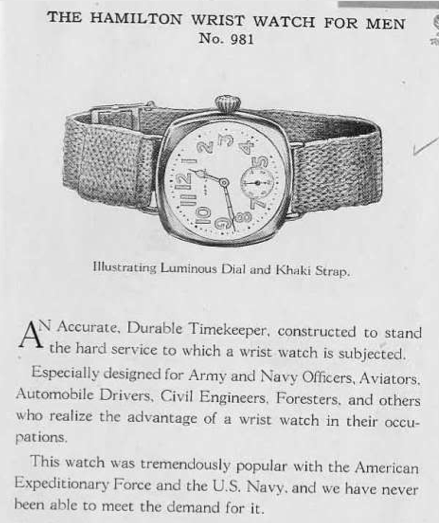 Prior to 1919, Hamilton's line up was predominantly pocket watches.  Models ranged in size from 6/0 ladies pendant watches to 18-size railroad-approved watches with 23 jewels and solid gold cases.

A good example of a "middle of the road" model was the model 975.  The model 975 was produced for a long time - starting just before the turn of the last century and ending in the mid-1920's. 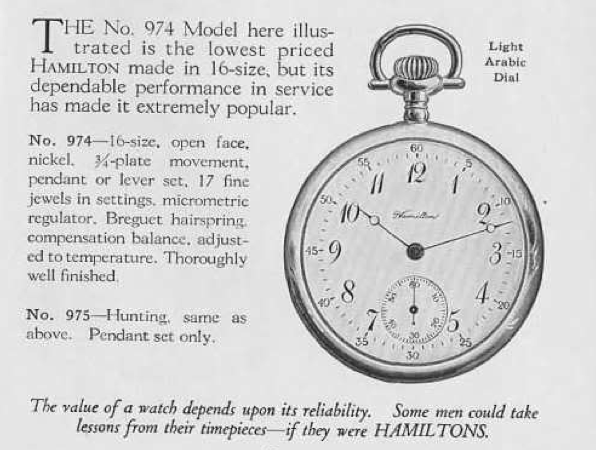 The No. 975 is the same as the No. 974 except it's set up for a Hunter-style case where the movement is housed in a clamshell case with a solid lid.  The pendant on a hunter cased movement is at the 3 position so the second hand is right next to it at 6.  The 974 is an "open face" movement so the pendant is at 12 and the second hand is opposite it at 6.  They are both size 16 movements and will fit either case but their orientation is purposeful.

The same is true with other models in the Hamilton's line.  The odd numbers are for hunter cases and even for open faced cases.  So the 940 is open faced, the 941 hunter cased.  The 992 is an open face and the 993 is a hunter case… and so on.

Originally the buyer would pick out the movement they wanted and the jeweler would then provide a selection of cases to install it in.  But by 1919 Hamilton also offered pre-cased models.  In other words you could buy the movement loose or pre-cased.

You'll find 974's and 975's as both pendant-set or lever set movements… both varieties were offered.

The 975 is not a railroad approved model.  There are a number of reasons why, the obvious one is railroad watches had to be open faced.  But by 1919 they also had to have 21 jewels or more and the 974 has 17.  In any event, it's still a very nice and desirable model, in my opinion.

I have a soft spot for pocket watches.  I'm not really sure why.  I just think they are really cool.  I'd say "the bigger the better" but 18 size watches are really pretty big and I find 16 size to be "just right".

So I had no problem purchasing a 975 model recently because it came in a very nice case with very little wear.  This case really does look like a shell but more like a scallop, I suppose, than a clam. 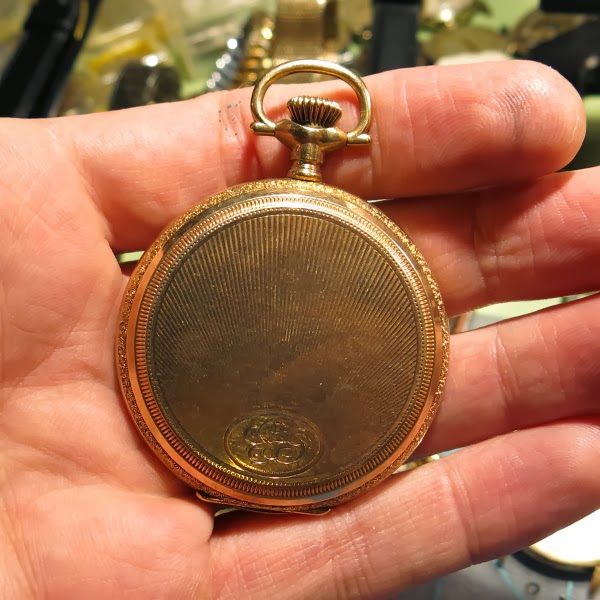 Hunter cases are typically opened by pushing the crown in a little and this one opens nicely to reveal a beautiful porcelain dial very similar to the one in the catalog image above.  This style of hands are called "moon hands". 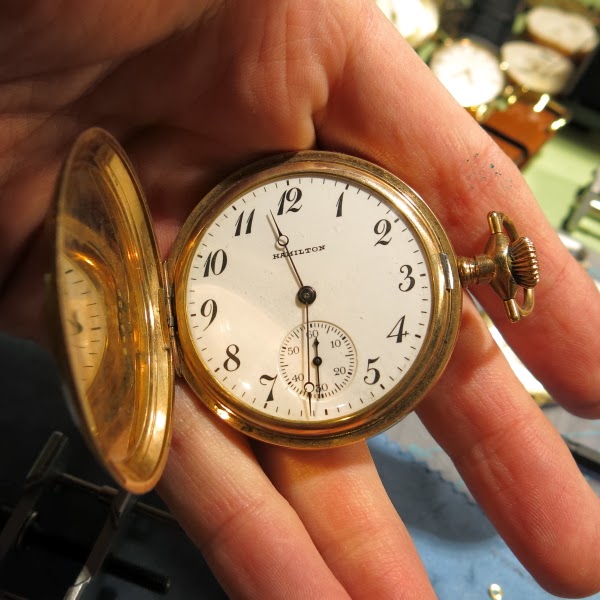 The back of the watch is opened with a case knife to reveal a dust cover that further protects the movement. 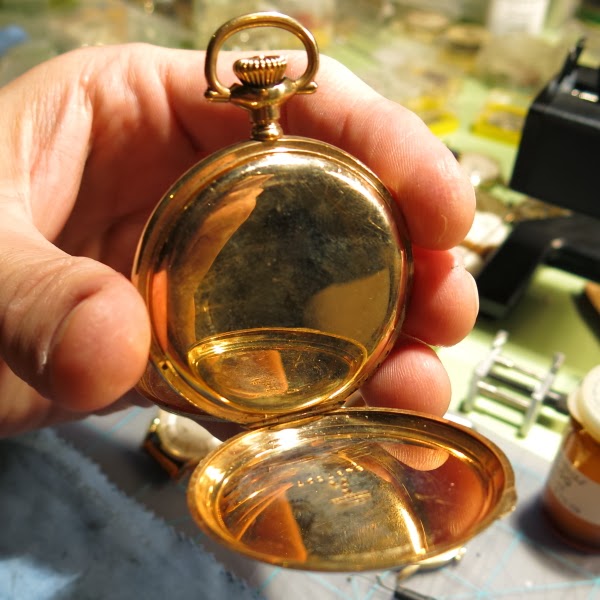 And here's the nicely damascened movement - it's almost a shame to have to cover it up with two covers - I'd rather look at it though a display back and enjoy watching it tick away. 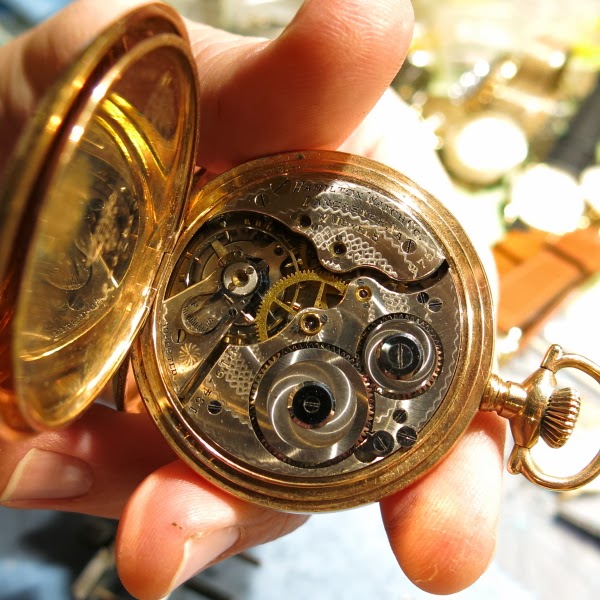 I removed the movement from the case by removing the two case screws that hold it in place and dropping it out the front.  With the dial removed I can see somewhat fresh microgliss lubricant on the setting parts - so this watch was overhauled not too long ago but I don't know when for sure.  You can tell this is a pendant-set model since there is no lever on the side to slide out and put the movement in time-setting position.  If you look closely you can see that this is a "negative set" model - where the springs inside the movement keep the watch in time-setting mode - note the clutch is up against the setting wheels and not against the winding pinion above it.  When the crown is pushed it, it will overcome the springs and move the clutch up against the winding pinion - so you can wind the watch. 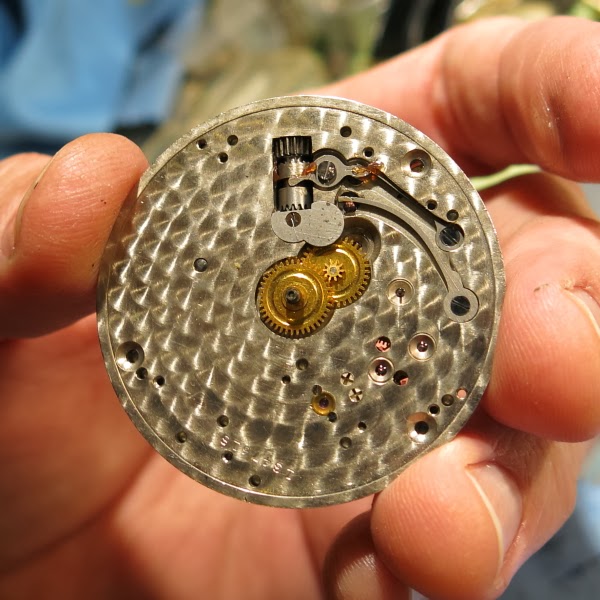 One of the things I like about pocket watches is the parts are so much bigger than wrist watches.  It's very easy to disconnect the hairspring from the balance cock so the balance assembly can be separated or installed while in place. 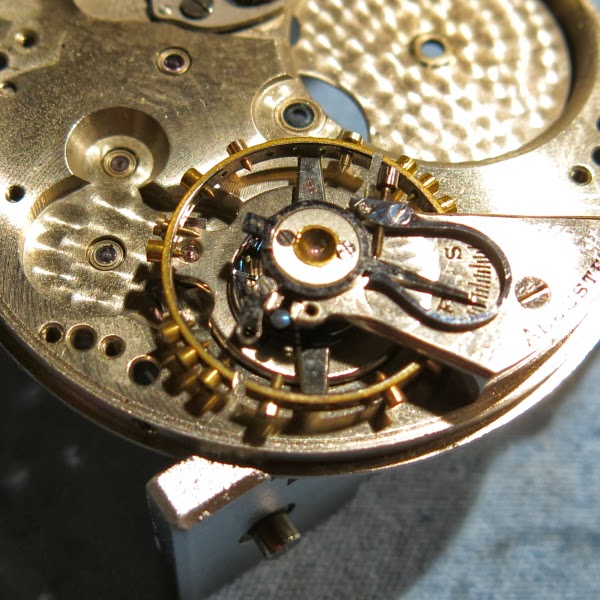 Cleaning a 16 size pocket watch requires a different set up in my workshop.  I need to use mason jars instead of baby food jars for the cleaning solutions.  But other than that, the process is the same… clean, rinse, rinse, dry, lubricate and reassemble.  Pocket watches can have a few more parts too - since the setting mechanism can be a little more complicated. 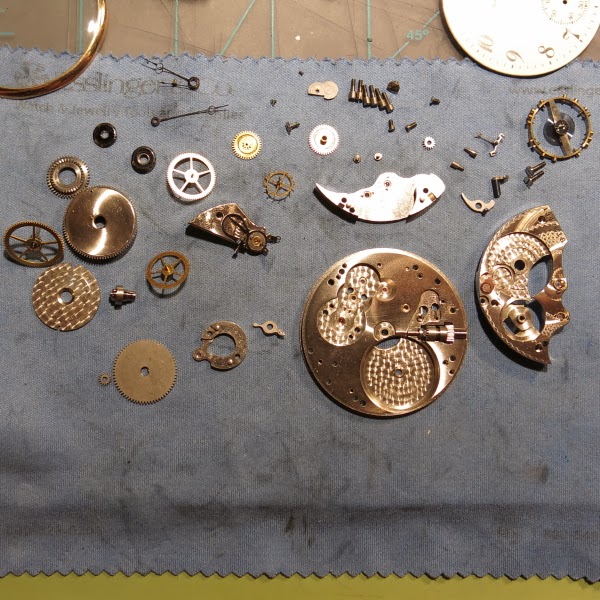 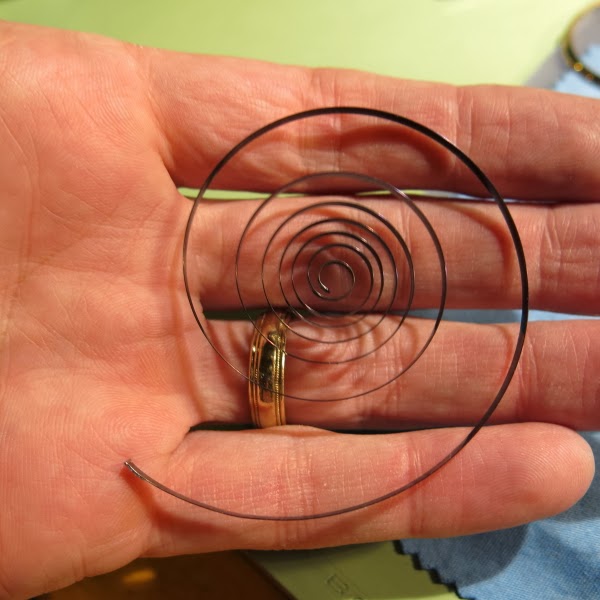 These springs can really pack a wallop so you need to be careful handling them.  This white alloy spring comes pre-coiled and I get one shot at installing it in the barrel correctly - otherwise I'll have to rewind it in my "big" mainspring winder. 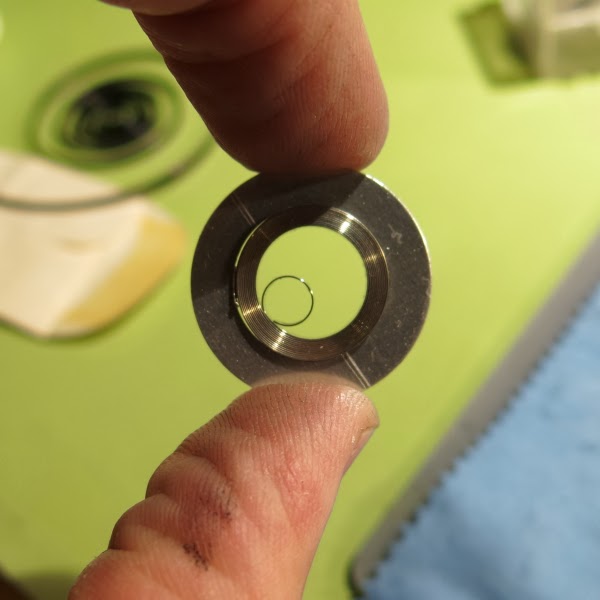 Everything is cleaned, oiled, and the movement is back to purring away at 5 beats per second. 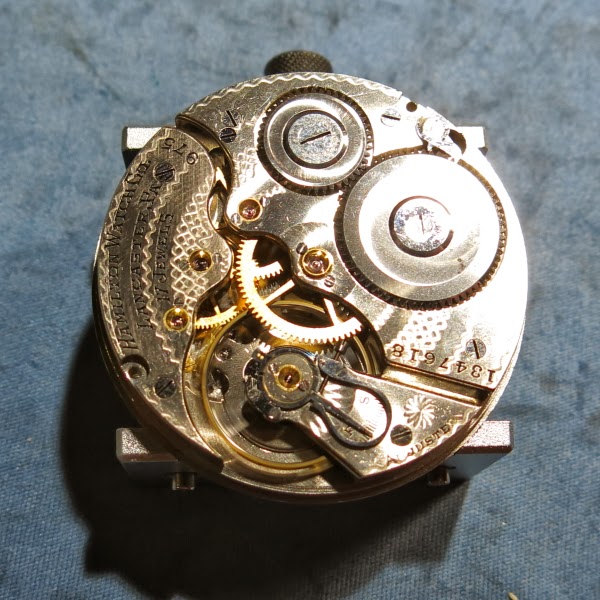 I can't complain about this time keeping… pretty much dead on with great amplitude (thanks to the new mainspring) and a low beat error too. 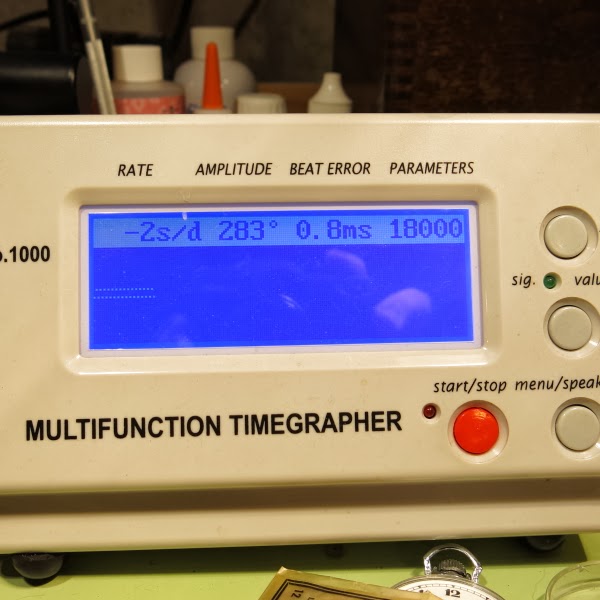 Now that the movement is running well, all that's left is to reinstall the dial and hands and then put it back into the freshly polished case.  This Model No. 975 turned out really well, I think. 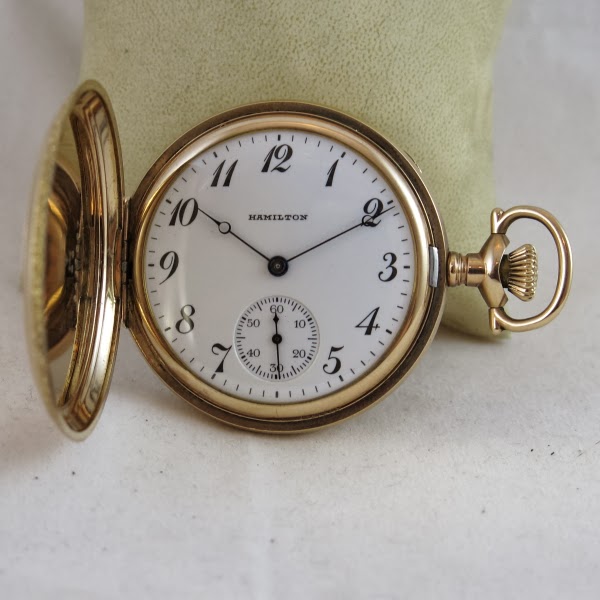 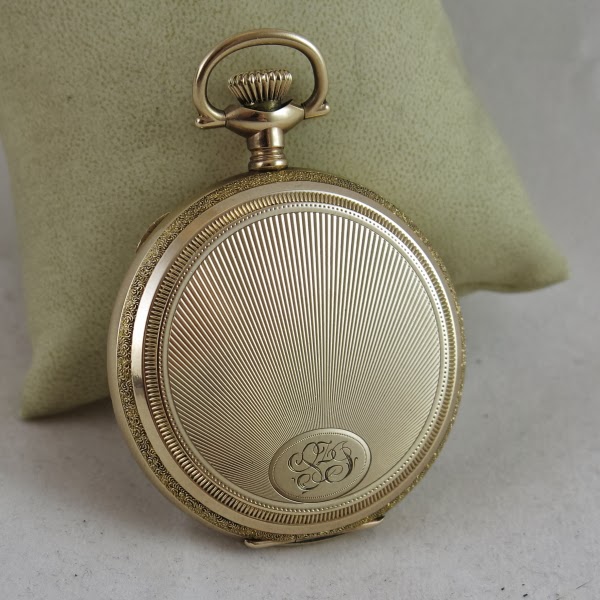 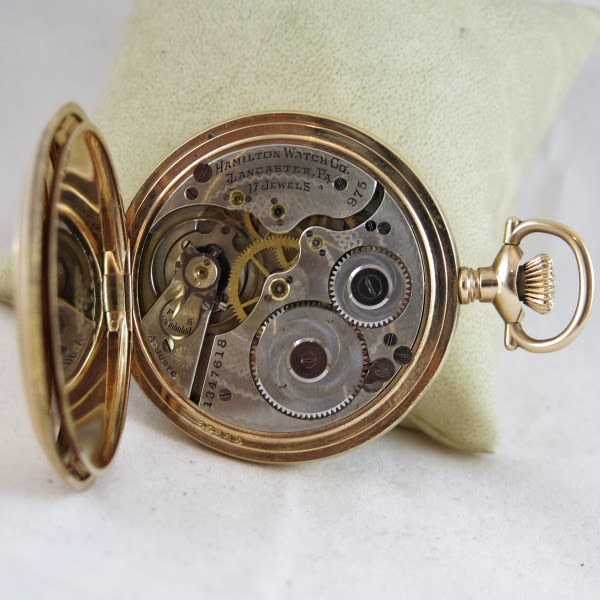