Although the Hamilton models with Swiss-made movements were the "entry level" models in the Hamilton line up, I think they have some of the coolest dial designs of the 1950's and 60's.  Hamilton's earlier models had a lot of elegance in their own rights, but when it comes to funky dial patterns, the watches in the late 1950's are tough to beat.

Take for example the 1958 Keane.  It was produced for four years. 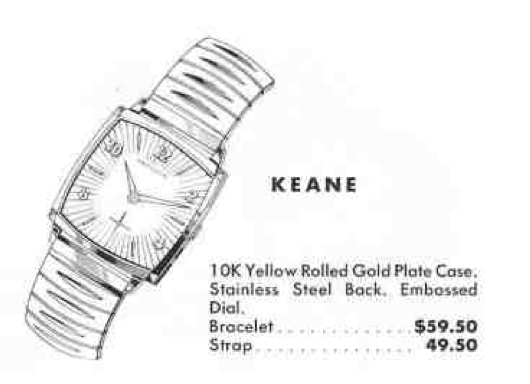 The Keane comes in a square case, sometimes described as a "television" case and it's not unlike other models from the same time period like the Carson I did earlier this month.  But what really makes the Keane pop is the sunburst dial with radiating grooves that look almost like a scallop shell.    It also reminds me of a square version of the 1958 Sea-Glo.

The case is 10K rolled gold plate with a stainless steel back.  Tucked inside behind the embossed dial is a 17 jewel Hamilton 673 movement made by ETA.

My Keane project watch arrived in good shape overall.  Other than a new crystal and a nicer strap, I rightly assumed that the watch wouldn't need very much to be restored to fine condition.

The bracelet that came on the watch is a vintage Speidel but not original to the Keane.  Speidel bracelets weren't used very often by Hamilton other than on some of the late 1940's watches - so I'll do a little checking to see if I can reuse the bracelet elsewhere. 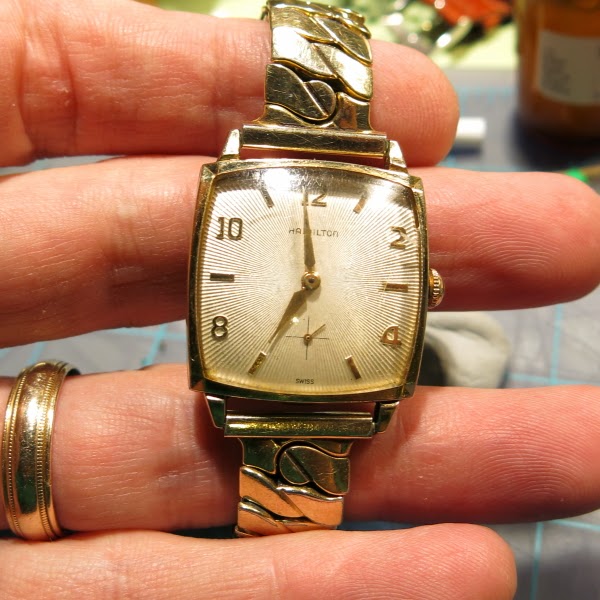 The back of the case is stainless steel and lifts off with the little tab between the lugs.  Sometimes these RGP cases with stainless steel backs can separate a little too easily and they need some tweaking to make sure they don't accidentally separate - which has been known to happen. 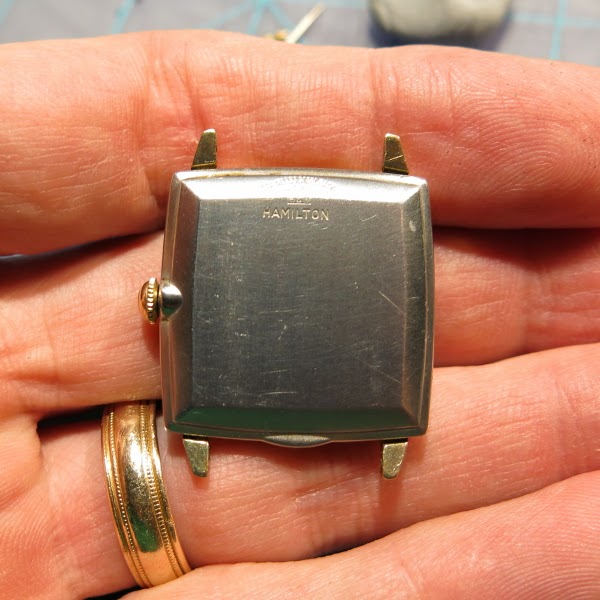 Without the crystal in place, you can see that the dial is actually in very nice shape.  It's a little dusty looking but otherwise looks great. 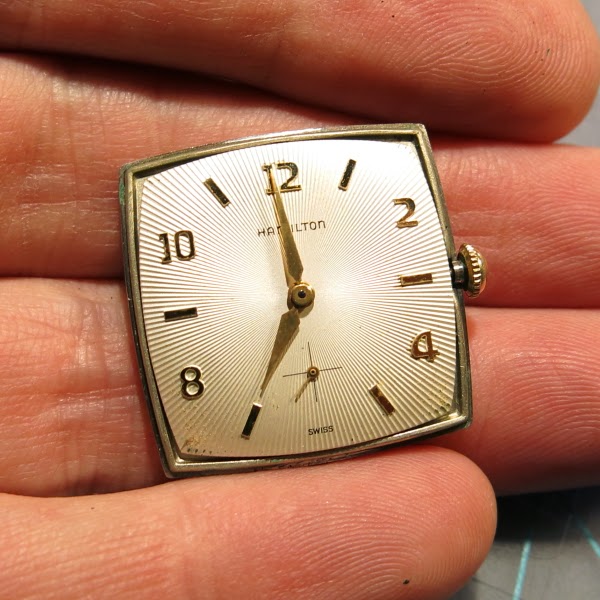 The 673 is a very common model for manual wind models with Swiss movements that use a sub-second hand (instead of a sweep second hand). 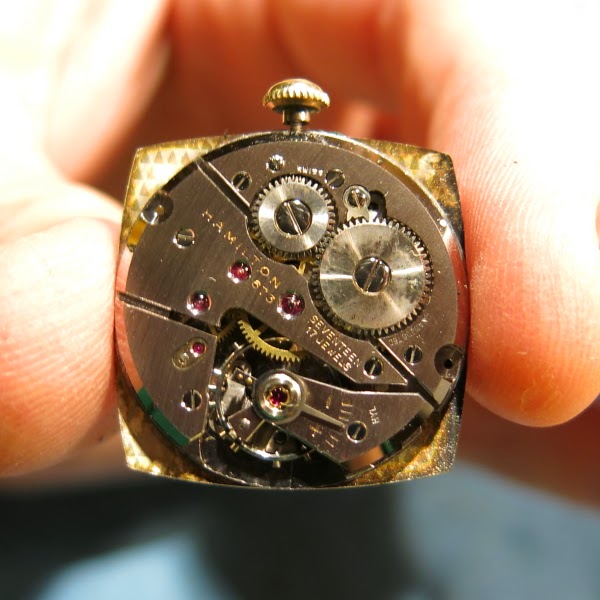 While everything is being cleaned, I'll replace the crystal with a GS replacement specially formed for this model. 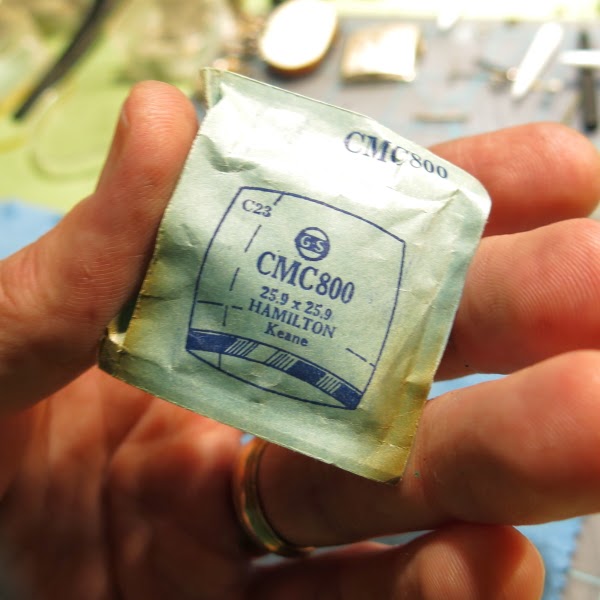 Once reassembled, all the movement needed was a little tweaking to the regulator to bring the timing in line. 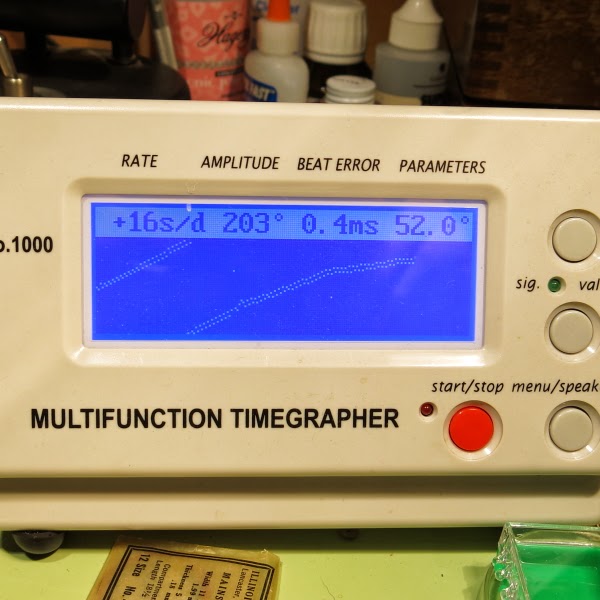 And here's the finished project on it's pillow shot with a genuine lizard strap and fresh crystal installed.  Doesn't that look way better?  I think the grooved dial really makes this model pop!  The seems to always catch the light, regardless of the viewing angle so it has a pearlescent effect, just like a scallop shell. 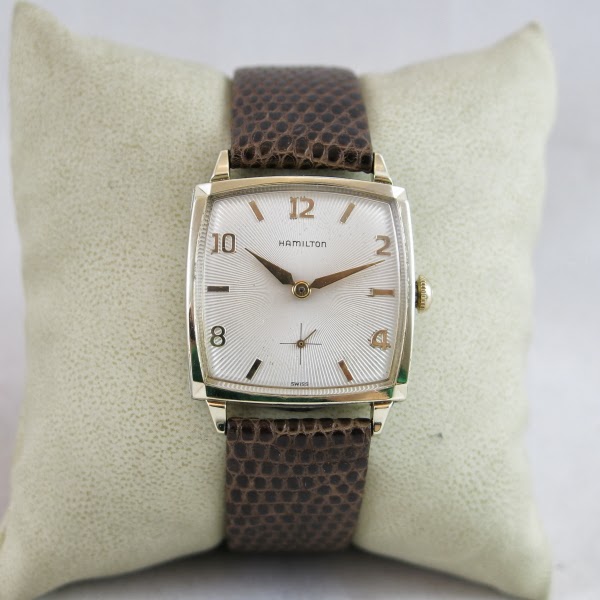