Hamilton introduced it's first automatics in 1954, including it's first calendar-equipped automatic.  By the following year, there were 17 different models to choose from in cases ranging from solid 18K gold through plain-jane stainless steel.

The Automatic K-504 has two dial options, an all numeral dial or a numeral and marker dial.  Both dials offered luminous hands with dots at the hour markers.  The case has flared lugs, and reminds me a little of a bull's horns.

Behind the dial you will find Hamilton's Swiss-made, 17 jewel 661 movement made by Kurth Freres (aka Certina).

I landed a K-504 with the all-numeral dial a few weeks ago and finally got around to servicing it.  As received, it was running better than it looked.  The crystal was too small and had let in a little moisture  by the 9.  The case was in need of a good polishing too.  But one of the good things about stainless steel cases is they can usually take a beating and still be polished back to "almost" new. 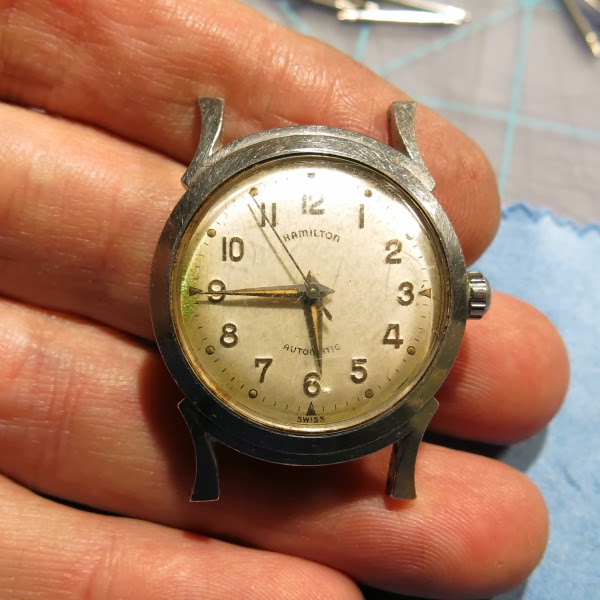 The back of the case screws off.   A wrench with six spokes would be ideal to remove this back but I find a good adjustable three-point wrench all that's needed most of the time.  Some wrenches only have two points - and they can be real buggers to use if the case is on tight. 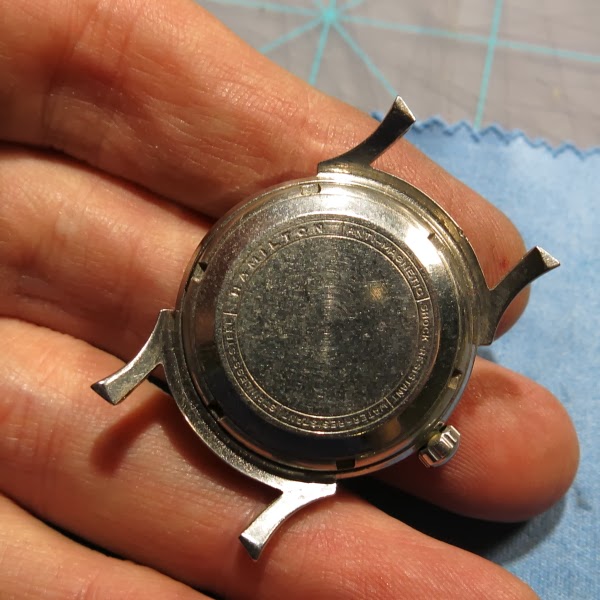 With the back removed you can see the 661 movement is a little dirty but otherwise in decent shape - so the moisture that affected the dial wasn't enough to compromise the works.  The rotor on these movements is easy to remove - there's a little toggle switch near the center by the yellow arrow - just slide it over and rotate the rotor until it falls right off. 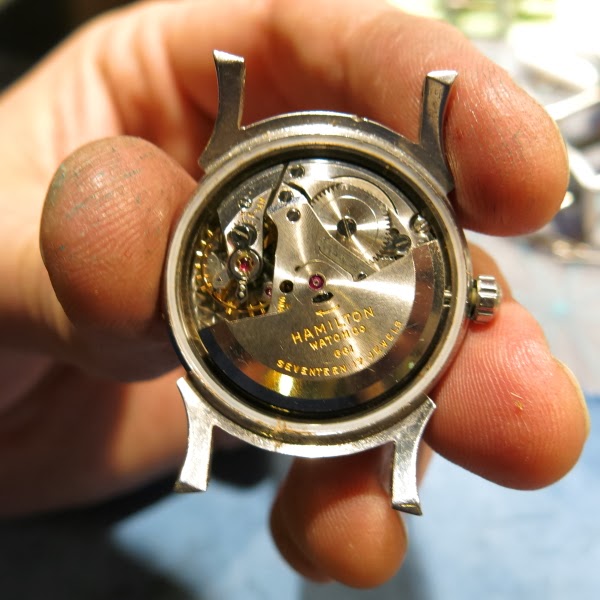 Everything gets taken apart and thoroughly cleaned and dried.  After being reassembled with fresh oil in all the pivots, etc. the watch goes onto the timer.   If you notice in the shot above, the regulator is adjusted by turning a screw head.  In the shot below the watch was running a little slow (look in the right center of the blue display, under 0.8ms).

When I turned the screw the wrong way so you can see how the the beat rate dropped off considerably.  Then I turned it the opposite direction and you can see it level back and it ended up running about 4 seconds fast per day (left center under the 249).  I find timers to be amazing tools - the fact that they can diagnose what's going on by listening to the ticking in the watch is fascinating. 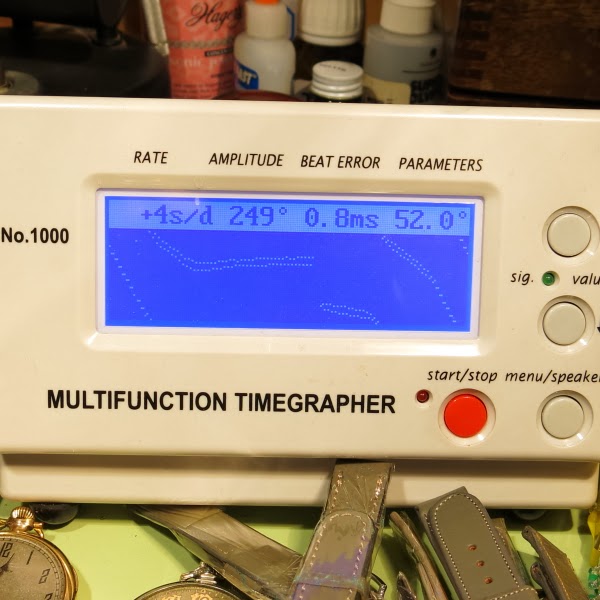 The dial and hands are reinstalled and the movement goes back into the case.  There are two case screws that hold the movement inside the case and it's easier to put them in without the rotor flopping around - so I'll put the rotor on last.  It just drops in place (with a little lubricant in the jewel) and the toggle switch is moved back to the locked position.  Nothing to it. 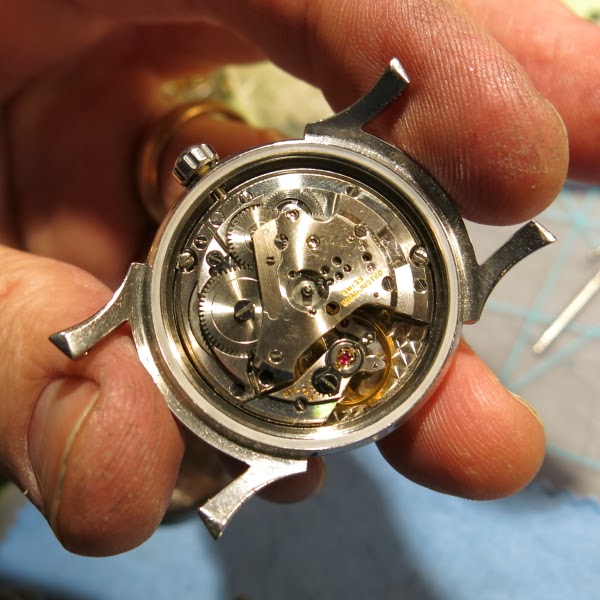 I was able to clean the dial up nicely and install a proper fitting crystal so with a thorough polishing of the case the now finished K-504 looks like it's trip to the spa was a complete success.  This watch is ready for some well deserved wrist time. 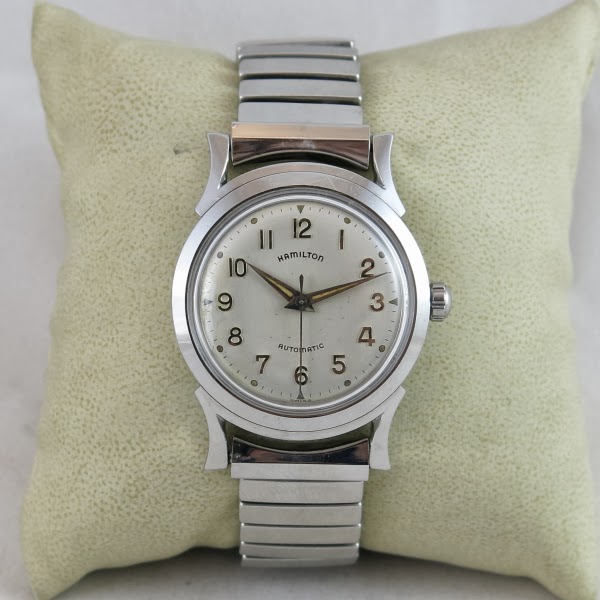 Here's an example of the numeral and marker dial in the K-504 and this watch is on it's original bracelet too! 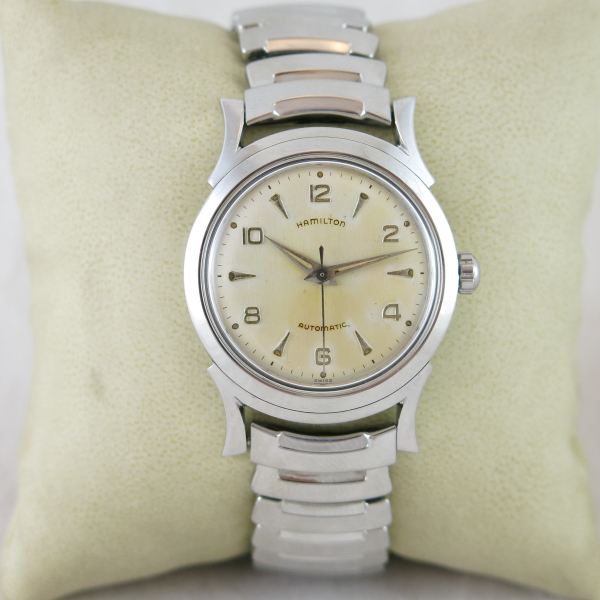