I think it's interesting when models were only produced for a single year while others were made for several years.  Some models, like the Boulton were made in various forms for decades and are still in Hamilton's lineup today!

But there are quite a few "one year wonders" and one of them is the 1958 Harrow. I think the Harrow may have been a "poor man's Standwick", which was introduced in 1954.  The Harrow came in a 10K RGP case (instead of gold filled) and has an embossed dial (instead of a sterling silver AGN dial).  And both models have central sweep second hands, which is unusual for a non-round watch.

The Harrow uses a Swiss-made Hamilton 671 movement which was made by ETA.  Instead of an American-made 735 movement.

I had never seen a Harrow for sale before I bought a Harrow project watch.  I can't say I've ever looked for one either.   I don't know if I would call it a rare watch but it's probably not very common since it was only made in 1958.  As received, my project watch was dirty but running.  The dial looks to have been cleaned up before but there's still some gunk around the markers. 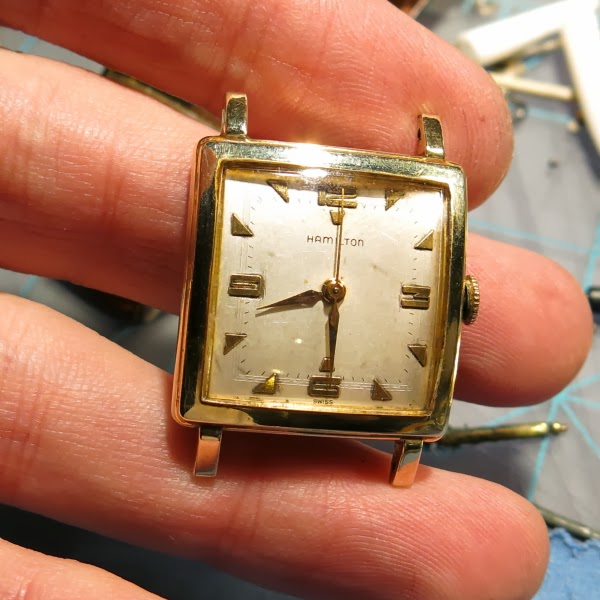 With the crystal out of the way, the dial has a two-tone look to it but I think it's because of the textured band outside the minute track.  Hopefully I can clean it up a little better but not lose any of the printing in the process. 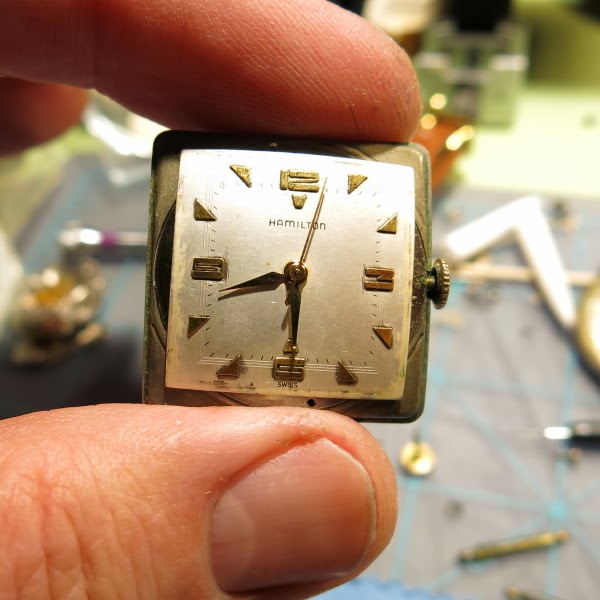 The 671 movement seems to run fine but you can see by the haze on it that it hasn't been cleaned in a while so a trip to the spa will do it some good. 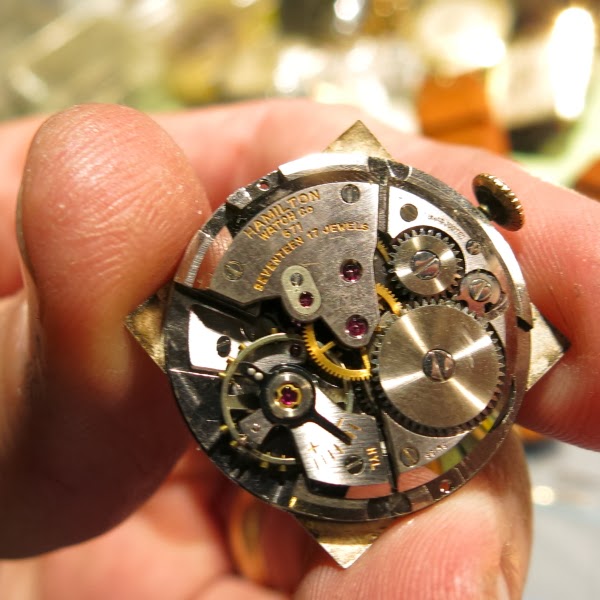 Hamilton was known to make all of it's parts, including the oil it used for lubrication.  I guess when the market got tough in the 1950's and Hamilton introduced Swiss movements, there must have been a real focus on keeping costs low so they could maintain a competitive price point.  The back of this dial is clearly marked Progressia Nidau, which I gather is a Swiss manufacturer. 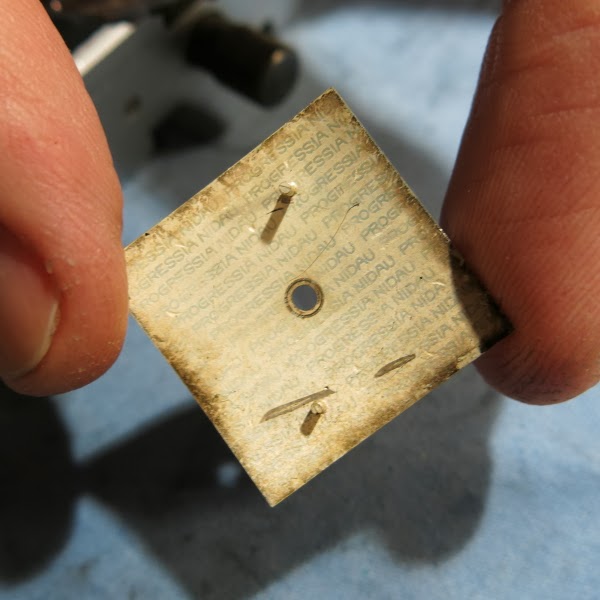 Everything is taken apart and thoroughly cleaned.  The haze is gone and everything sparkles. 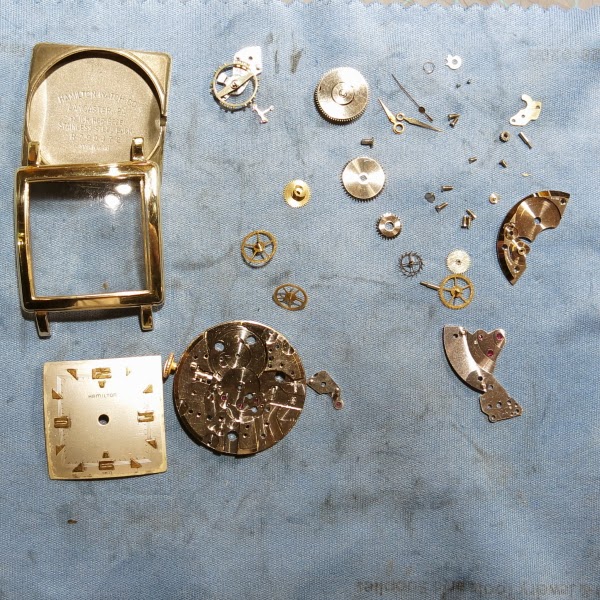 A little tweaking to the regulator is all that's needed to bring this 671 right in line. 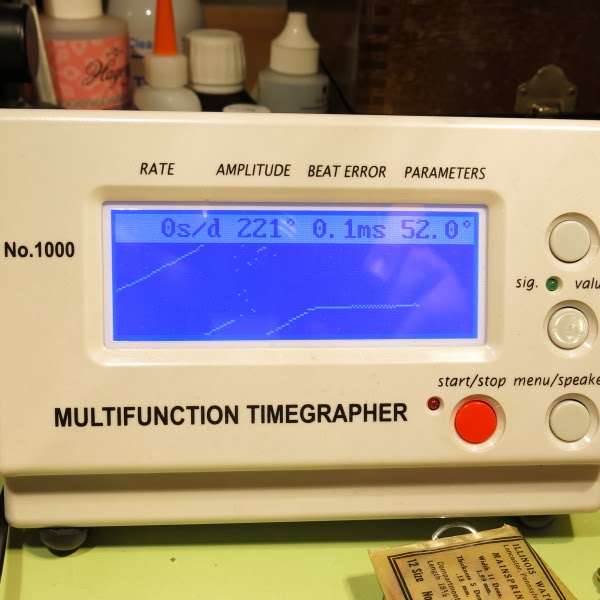 My project watch came on a vintage Kriesler bracelet and although it's not original to the watch, I kind of liked how it looked with the watch.  So I cleaned it up and reinstalled it.  I was able to get the dial a little cleaner too.  I could tell that someone in the past tried to scrape gunk out of the numerals and left some fine scratches as a result but you really can't tell without magnification.  I also replaced the crown with a less-worn example. 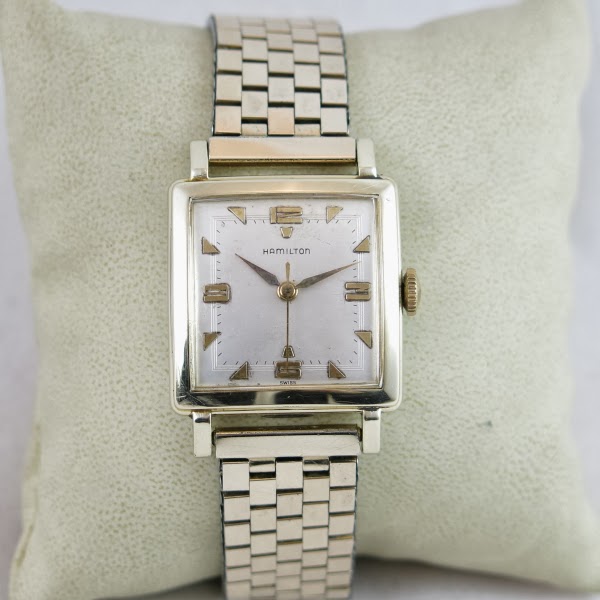 Overall I think this Harrow turned out quite nicely.
Posted by HandyDan at 8:17 AM