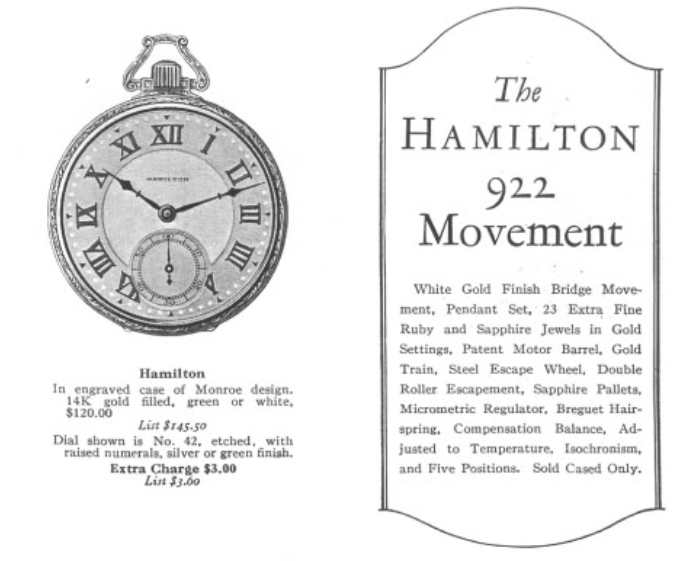 922 movement came only in solid gold or platinum cases - so they are VERY high end watches.  A variety of dials were available as well as case designs.  Most of the 23 extra-fine ruby jewels in the watch are set in solid gold and the wheels in the train are all solid gold too.

My pockets are not very deep so I couldn't easily afford a cased-922 project watch.  However, I did recently land a loose movement that struck my fancy because of the cool looking dial. 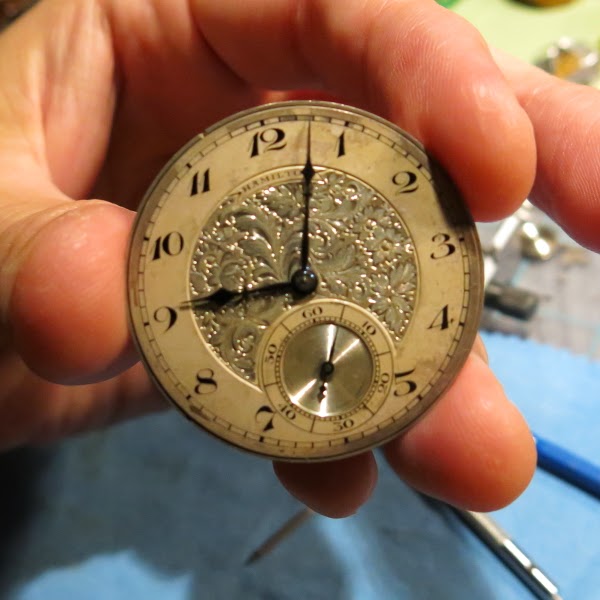 The dial is a No. 16A and it's solid silver with a hand-engraved center. 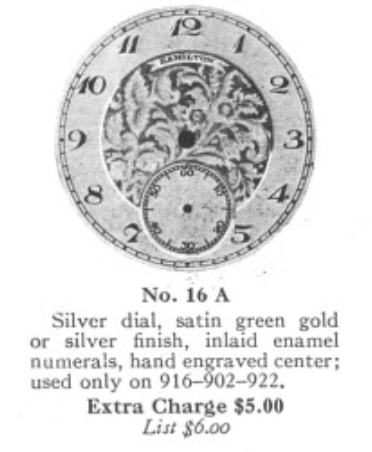 In the 1920's some of Hamilton's more fancy dials were actually made in Switzerland - and this one is an example... 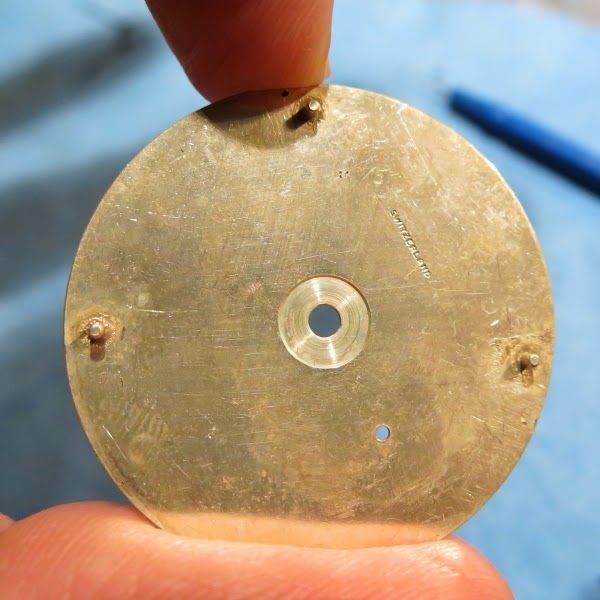 The 922 is a very attractive watch from the back side as well.  It is a white-gold finish and is much brighter than the nickel finish used on lesser jeweled grades.  This one is definitely in need of cleaning. 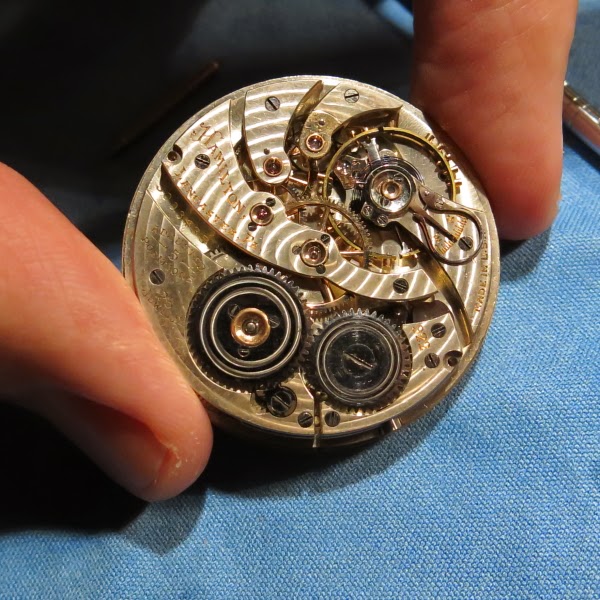 With the dial out of the way, it's easy to see that this negative-set movement is very similar to the other 12 size grades.  The cannon pinion and hour wheel in the center are the first things off when starting an overhaul. 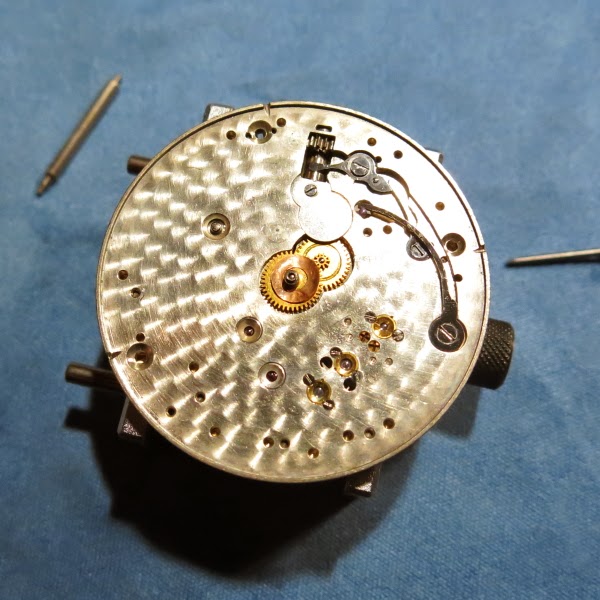 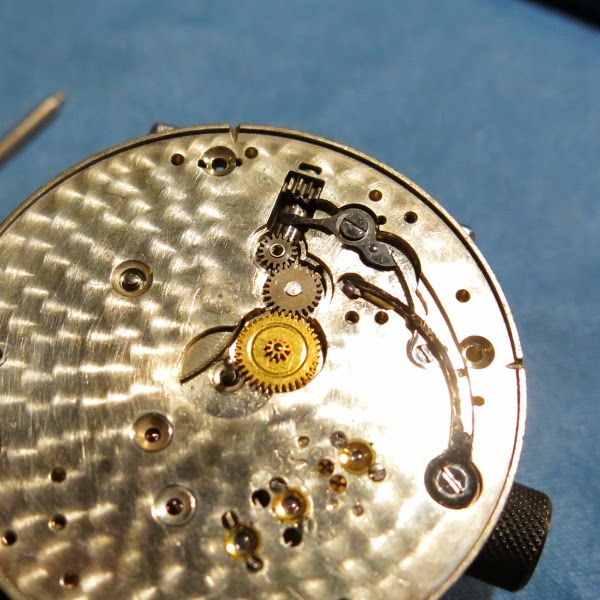 I happened to have a 12 size case that this movement would fit in (gold filled, of course).  It's currently housing a much more common 912 movement. 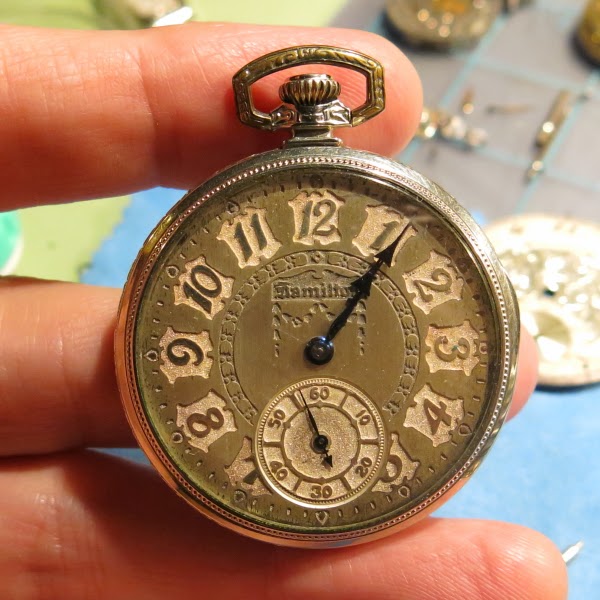 The dial on the 912 is a No. 40 and I have to admit that although it's in great shape, I don't really like it because the hour markers look like grave stones to me and creep me out.  This is the sort of watch the Addams Family would have worn, in my opinion. 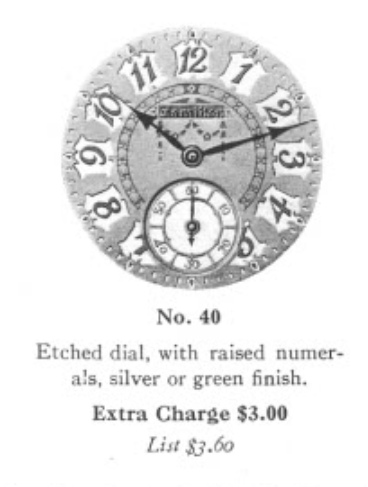 With the 912 out of the way, the 922 drops straight in and I installed it so I could use the stem and crown in the case to safely release the mainspring tension. 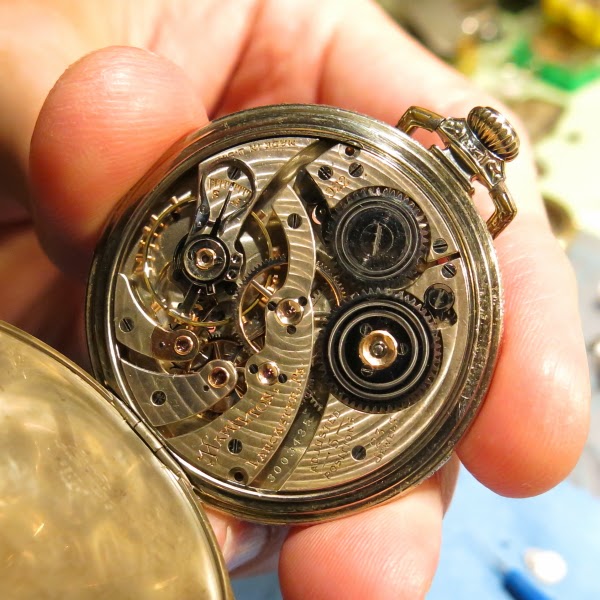 With a little pressure on the crown, I can use a screwdriver to hold the "click" open and then let the crown freewheel in my fingers as the mainspring lets out any remaining tension. 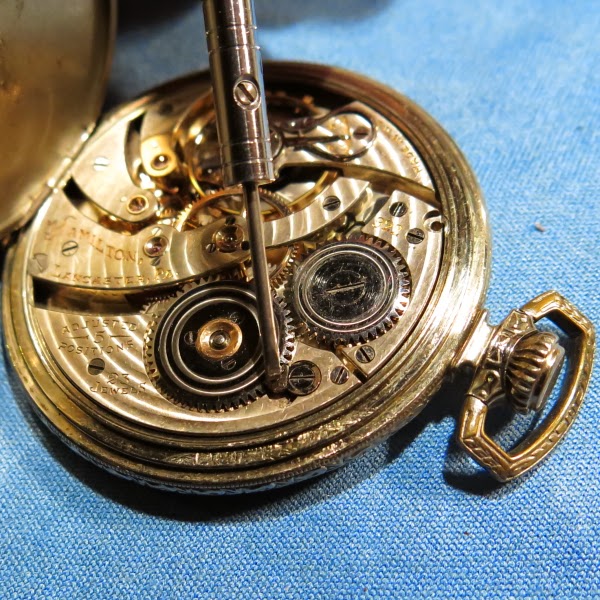 This is where it gets a little more complicated.  With the movement out of the case again, I will take of the winding wheel.  The larger ratchet wheel has a jewel in the center held in place with three screws. 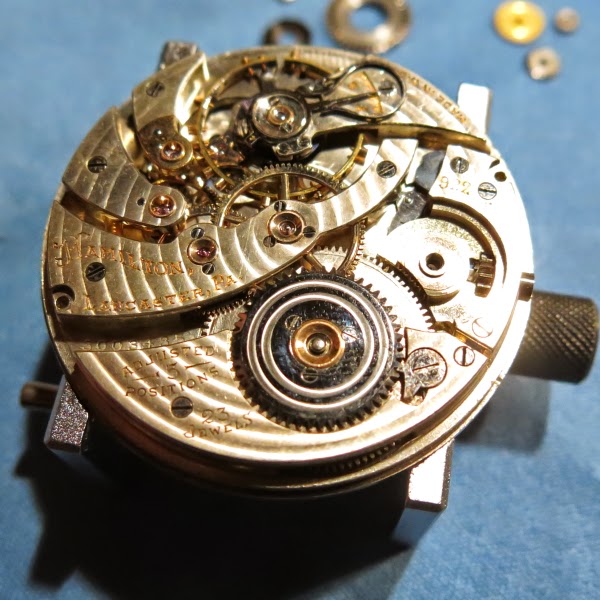 With the three jewel screws removed, I can take the jewel out of the ratchet wheel.  The ratchet wheel is firmly attached to the arbor below and it won't come off. 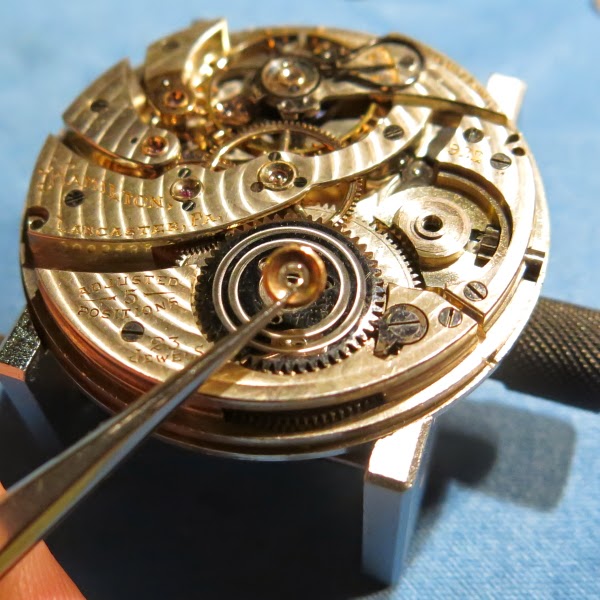 Now I'll move my attention to the train wheels.  The fourth wheel has it's own bridge held down with a screw.  The escape wheel next to it is the same way.  The center wheel and third wheel share a long train bridge. 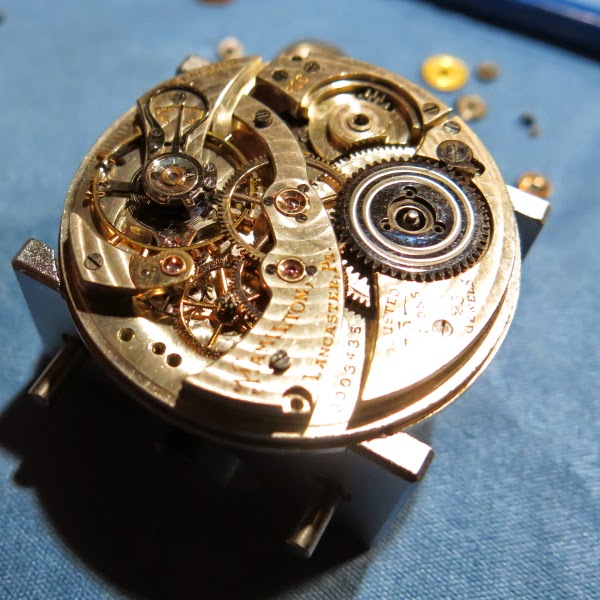 With the bridges out of the way, you can see the solid gold wheels along with the steel escape wheel on the left. 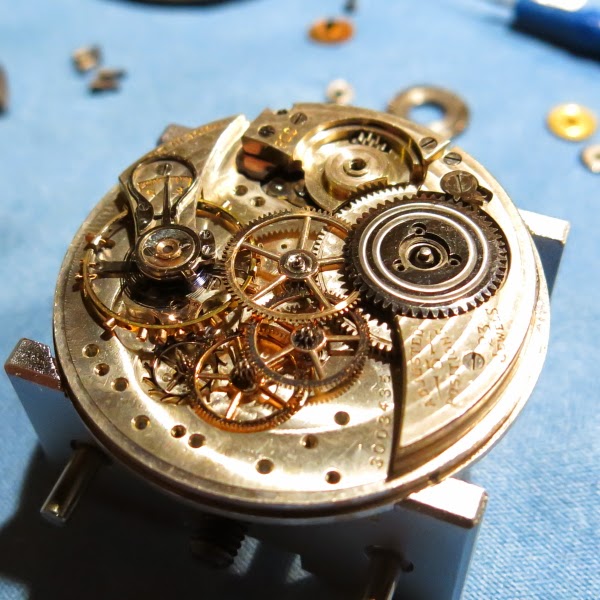 Next out is the bridge that covers the stem, clutch and winding pinion. 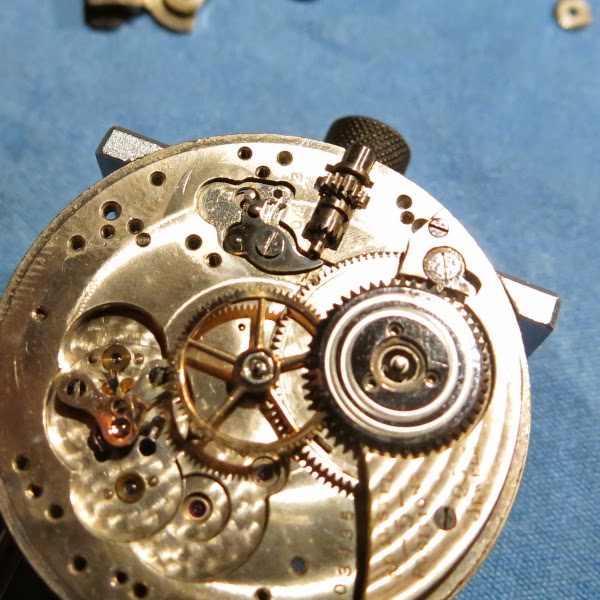 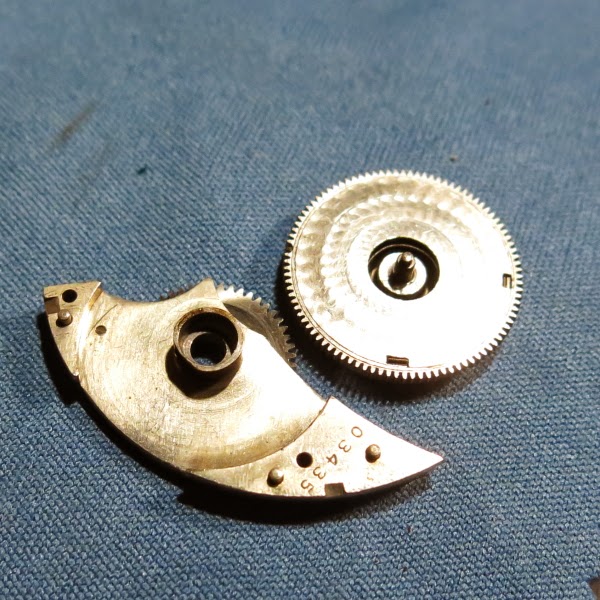 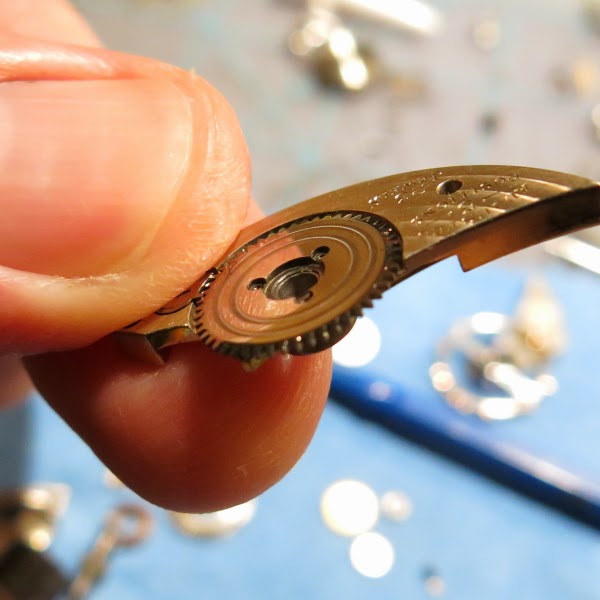 The last part to come off is the pallet fork and the bridge that holds it in place. 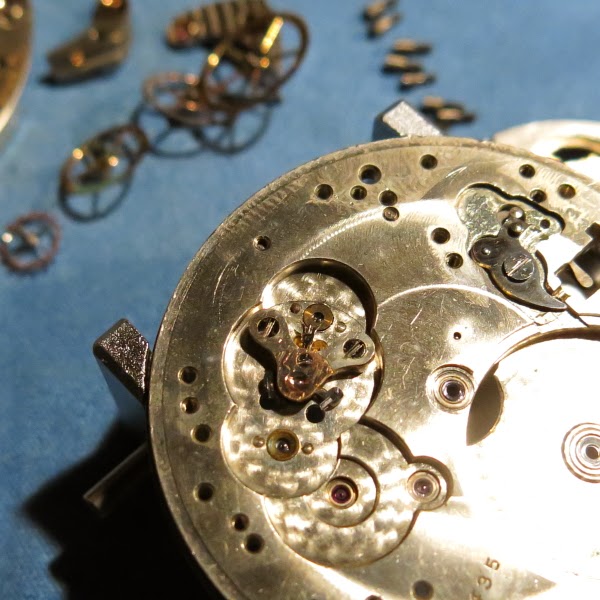 Inside the barrel is the mainspring.  I can clean that too. 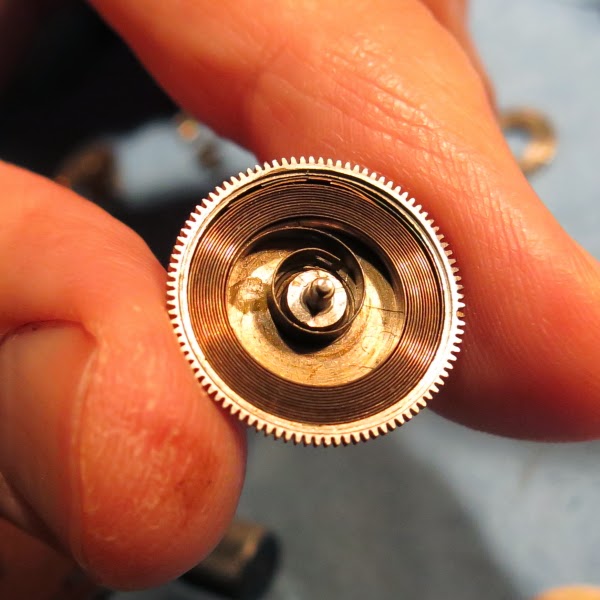 After cleaning everything, I took a close look at the ratchet wheel.  I guessed it would come apart and while trying to break it loose I succeeded... I broke it off.  Perhaps you heard my cry of anguish?  It was pretty loud. 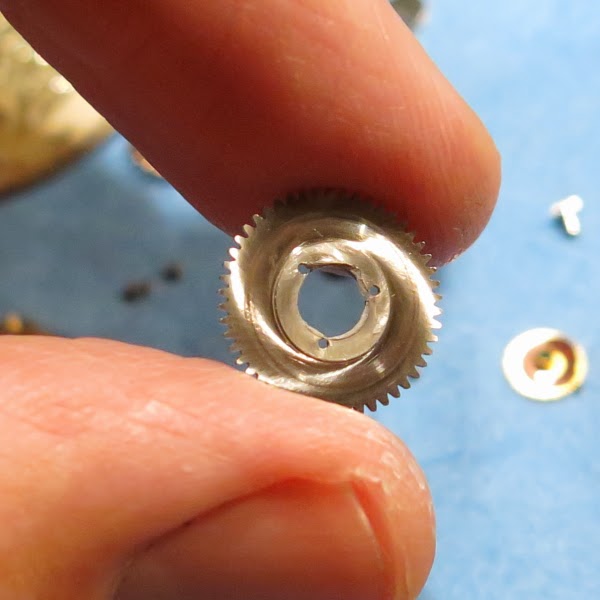 Well, everything went back together and would work great, I suspect, if I could reinstall the ratchet wheel, which I cannot.  So this watch will be dead in the water until I figure out how to replace the ratchet wheel. 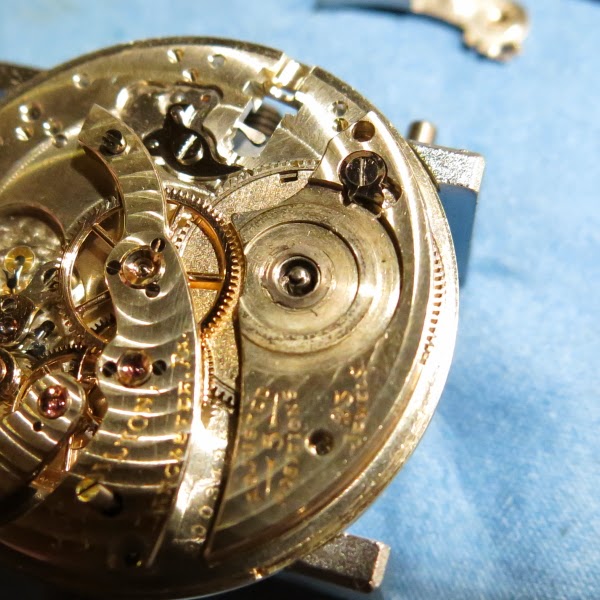 With a heavy heart I installed the assembled movement in the case.  It looks fantastic, but won't run without some way to wind it. 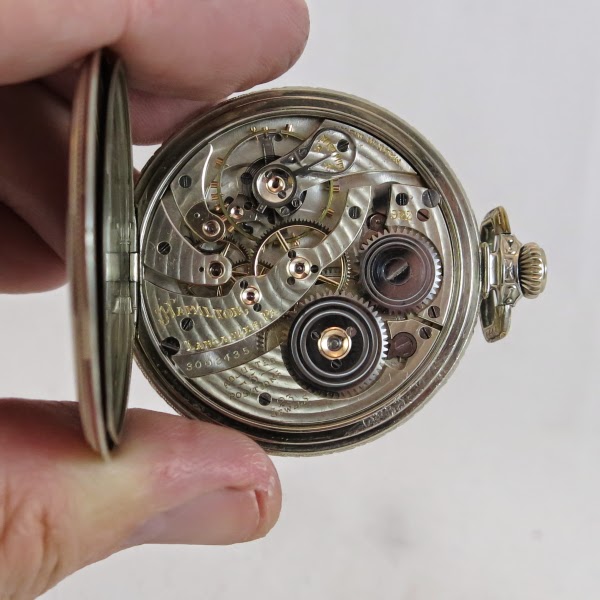 The case is un-engraved and in excellent shape.  The dust cover clearly shows that this is a Hamilton case. 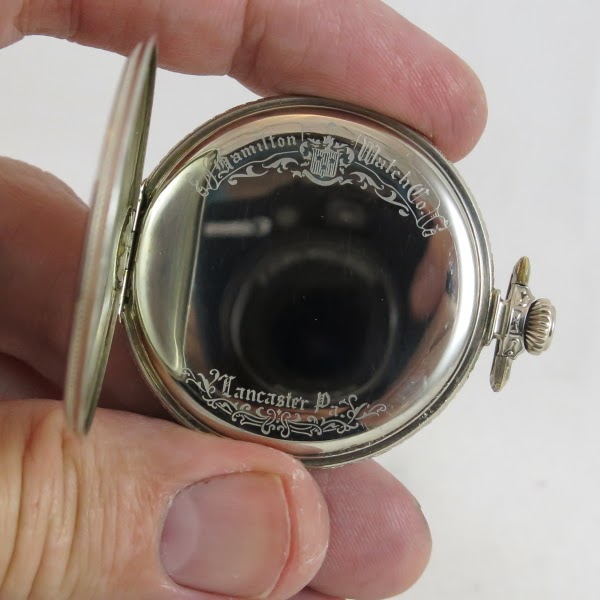 And here's the business-end of the watch.  Unfortunately it will only be correct twice a day, until I get a replacement ratchet wheel.   But, part of a hobby is learning new things and I definitely learned a lesson with this watch... if it doesn't come apart easily, don't force it. 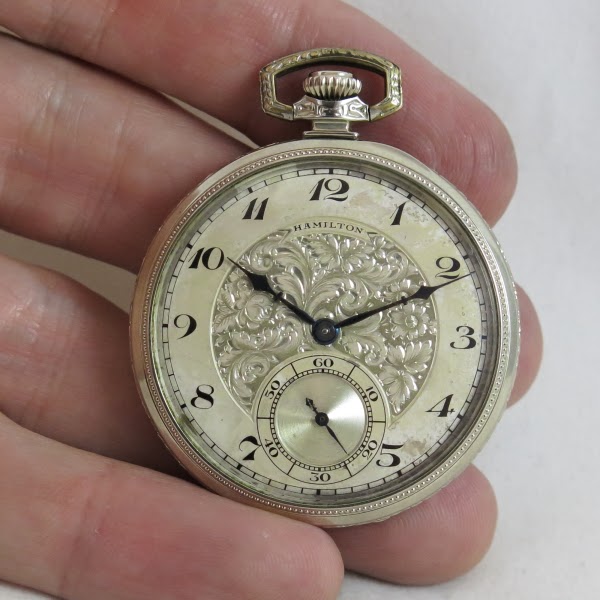 After emailing some pro's I know, I learned that the ratchet wheel screws onto the barrel arbor.  It sometimes can be very hard to unscrew, which I discovered.

Of course, I doubt my fix will hold over the long term so I still need to find a new ratchet wheel for a permanent fix.  The good news is it's shared with the 902 and 904 movements - so I have three times the chances to score a parts movement someday.
Posted by HandyDan at 6:59 PM