I like the 1930's era watches the most, I think.  There's something about the depression-era that I find very fascinating.  Maybe it was because Hamilton's wrist watch line really seemed to heat up and many of the watches are large.  Maybe it was the influence of the Art Deco style that was popular then.  Maybe it was just the innocence of a pre-War America.  Who knows?  One thing is for sure - there were a lot of great watches in the 1930's.

Oddly enough, there are not a lot of round watches in this period.  There's the Prescott, Ellsworth, Winslow, Cushion B, Spur and Endicott, to name a few.  Some of these watches are pretty rare.  One of the least common is the Randolph.

The Randolph was introduced in 1936 and it's not really clear how long it was made.  Some say three years and some say only one year.  It doesn't show up in any of the catalogs but it is known to have been produced then.  Production records indicate only 1,513 Randophs were made, so regardless of model year, it's one of the rarest models from the 1930's.

The Randolph is tiny for a watch from this period.  I think it's mainly due to the short lugs of the case design.   Since it has a 6/0 987F or E inside - which is the largest US-made wrist watch movement Hamilton produced, it's odd that appears to be so small.

The Randolph has a 10K gold filled three-piece case, with a case back, center and front bezel.  Two dials options were available; an applied gold numeral dial or a two-tone gilt dial with black numerals.

I never see Randolphs for sale, it seems, but recently I saw two... a gilt version and an AGN version.  The gilt version sold for well above my usual target project watch price but I was able to score the AGN version.

As received it was in decent shape, appearance wise.  The hour and minute hands are moon-style and incorrect for the model.  The crown is also incorrect - it's actually a tarnished white crown.  The watch was listed as non-running but that's not a big issue for me. 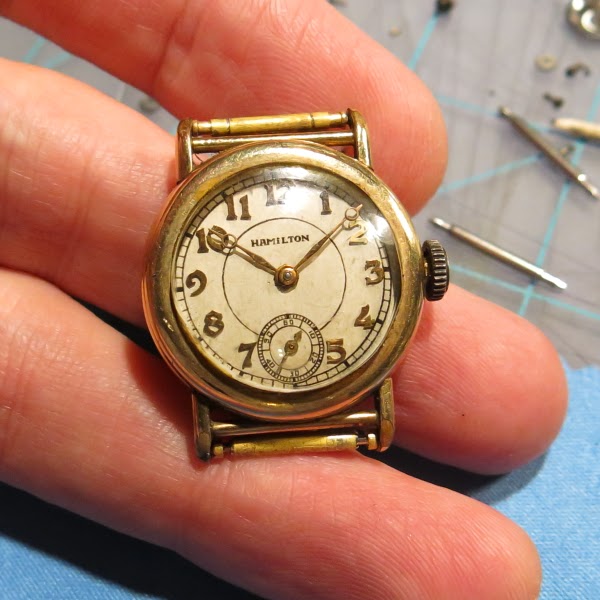 The case is in nice shape, no considerable wear thru - which is good to see on a gold filled case. 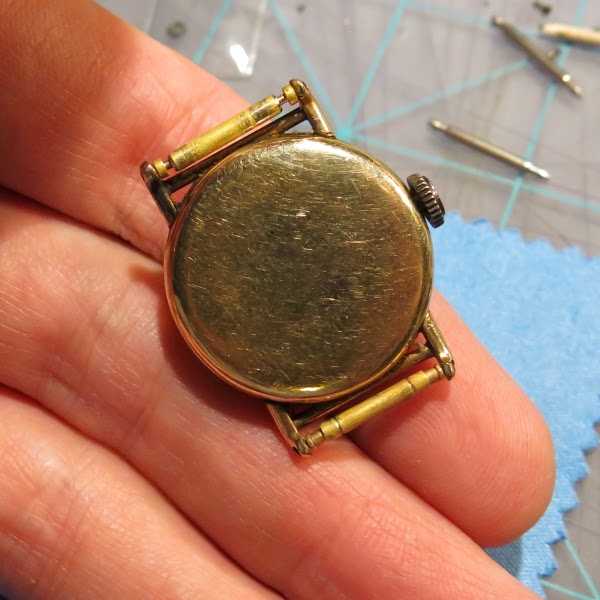 I have found that watches from the mid-1930's often do not say Hamilton inside the case back.  In any other era that would be a clue that the watch was a "jobber", or jeweler-assembled, watch.  If you see "rolled gold plate", in a 1930's Hamilton watch - that's definitely a sign that it's not an original Hamilton model.  So you need to know what to look for. 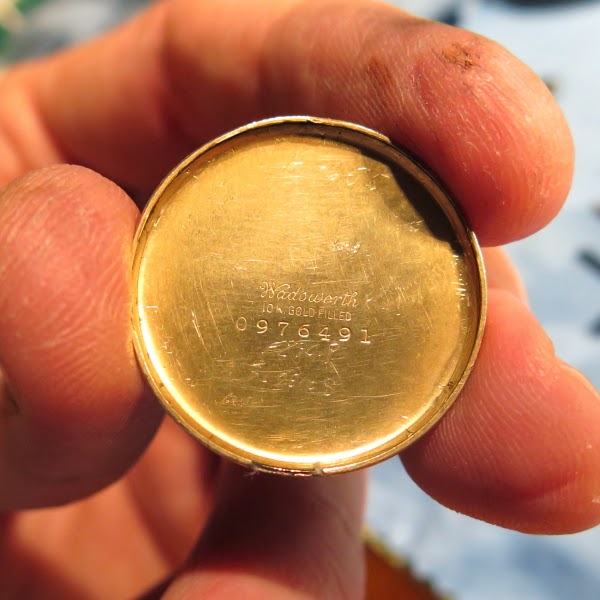 With the back off the watch, I can see a portion of the hairspring sticking out of the case.  That's a pretty good clue as to why the watch doesn't work.  This balance is toast.  Fortunately I have another 987F from the same period to drop in as a replacement. 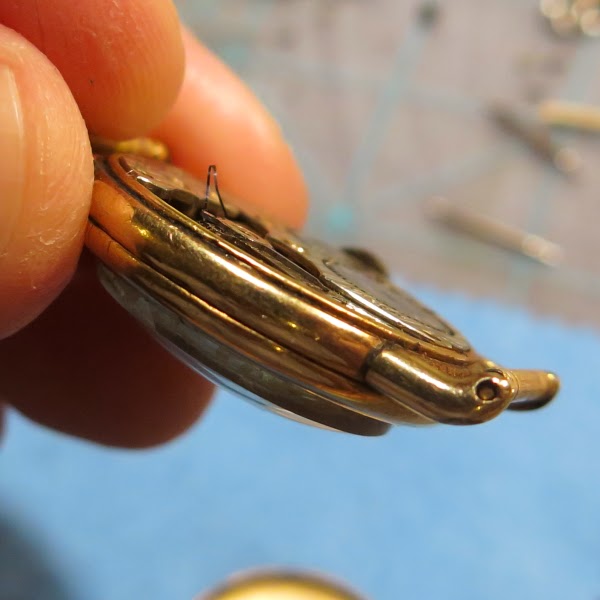 The 987F inside the case is very grungy.  It dates to 1935.  My replacement movement is very close in serial number and from the same year.  It easier to drop a known-to-be-working movement into the case than to try to replace the parts in this movement that are broken. 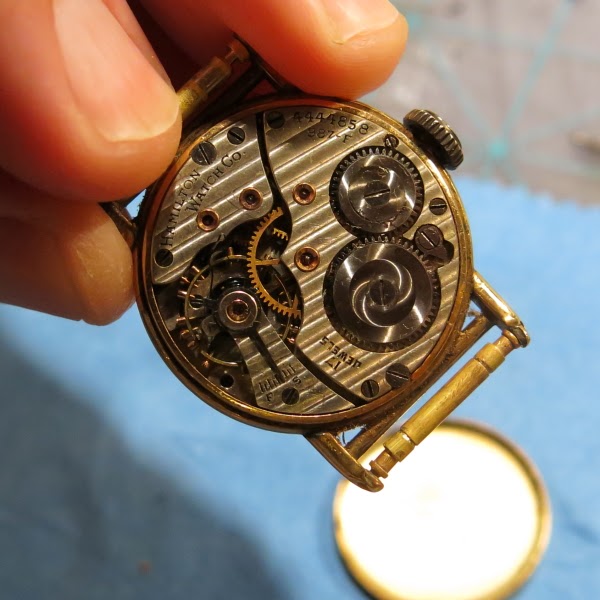 The crystal in the case was a little scratched up so now it a good time to replace it with a high dome glass crystal. 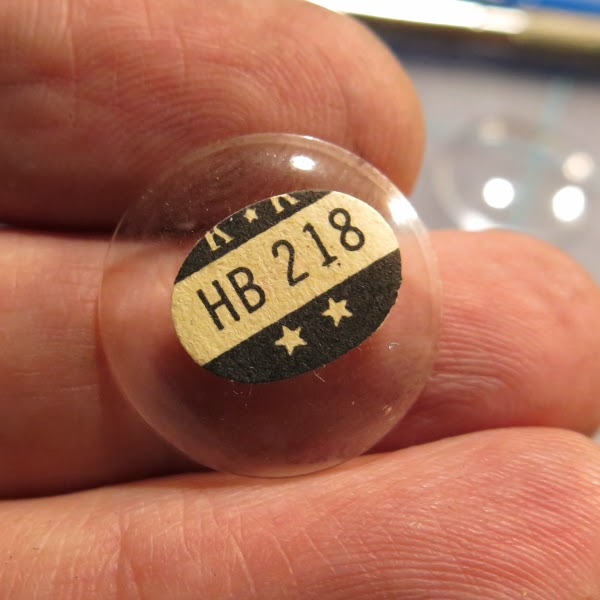 My replacement movement was serviced over the Christmas break last year.  It's still running just fine.  I get spare movements from jobber-cased watches I find or watches with worn out cases. 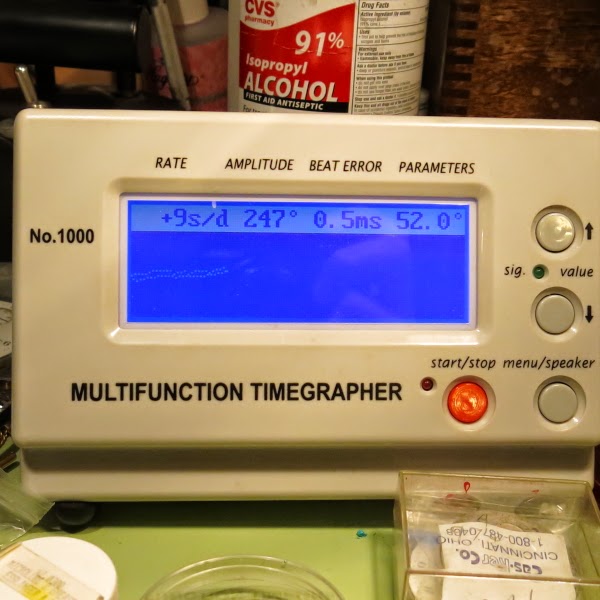 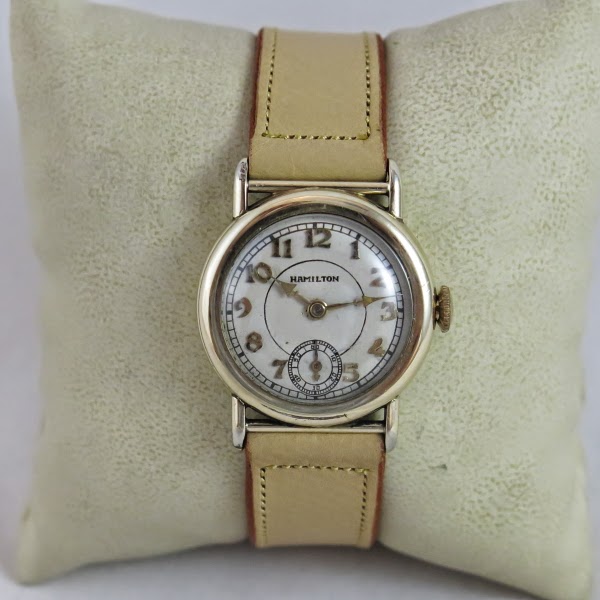 The Randolph is a tiny watch though by today's standards so this watch is probably more suited to a lady with an interest in fine old watches than a man - although some guys like small watches.  It's really only small when compared to other 1930's watches.  It would fit right in with the watches from the 1940's.

Here's another version of the Randolph with the two tone gilt dial with black numerals.  It's a nice looking watch, in my opinion, but a little on the small side 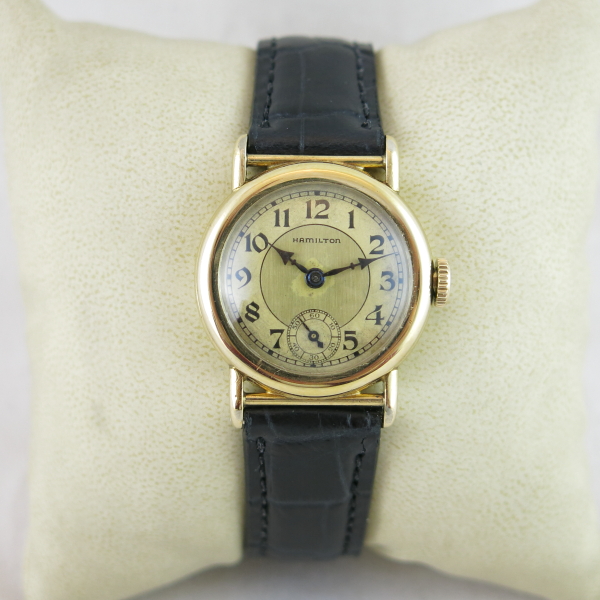