Some vintage Hamilton Watches from the 1950's and '60s echo the traditions established by Hamilton's earlier models.  The craftsmanship and materials reflect Hamilton's status as a premier watch manufacturer.  At the same time, some models are very futuristic and innovative - hardly recognizable to watches from the prior decades.  Further still, some watches are clearly entry-level watches meant to compete at a lower price point with imported brands.

But in contrast to all of these classes, there are some watches that have an interesting mix of traditional and innovative elements.  There aren't that many of them but they are interesting unto themselves.

Take for example the 1961 Talbot.  It was the second model to bear the name, the earlier version was in the 1930's.  It was produced for 7 years. 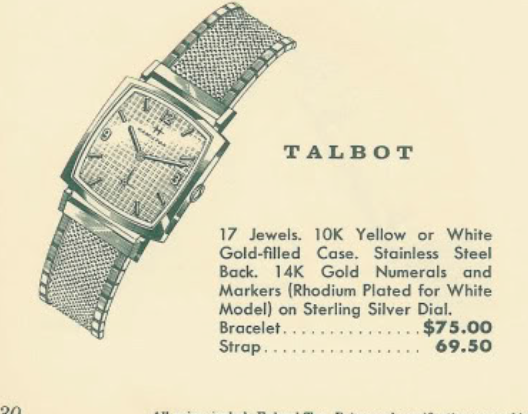 From a traditional standpoint, the Talbot came in a 10K gold filled case in either white or yellow.  The sterling silver dial had solid gold numerals, rhodium plated on the white version.  You could get the watch on a bracelet as well as a leather strap.

From an innovative standpoint, it has a funky spotted finish on the dial.  In addition, it's one of the few models to feature Hamilton's final 8/0 sized, sub-second, American-made movement, the 731.

I recently picked up a Talbot project watch in need of some serious TLC.  As you can see it was very dirty and the crystal was a wreck.  It must have been crushed, is my guess.  It was not running either but it appears to just need a very thorough cleaning. 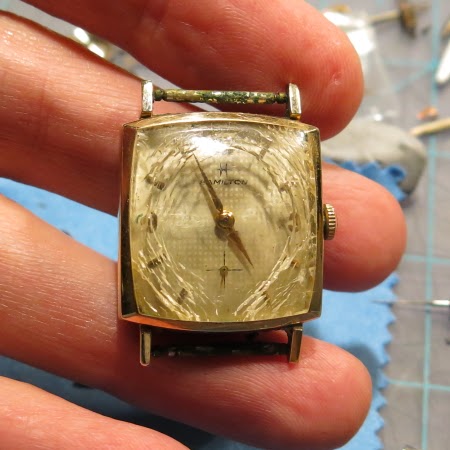 With the crystal out of the way, you can see the dial is in decent shape but its a little spotted and dirty. Hopefully it will clean up - I have no idea how well it would turn out if it was refinished. 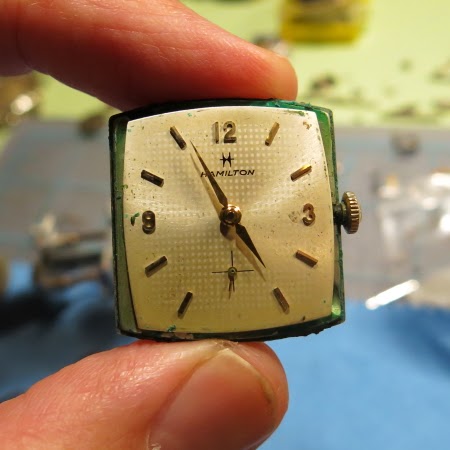 The 731 is basically a 730 movement with an improved balance.  The 730 differs from the 747 in that the balance is shock-jeweled so the delicate balance staff is less likely to break if you drop the watch or bang it into a doorjamb.  The 731 is different from the 730 in that it has a Glucydur Balance.  This special balance is made of a material that is very robust to temperature changes and there are no timing screws of any sort.  It is machined-balanced for perfect poise when it is manufactured.  Most modern watches today usually use glucydur balance wheels. 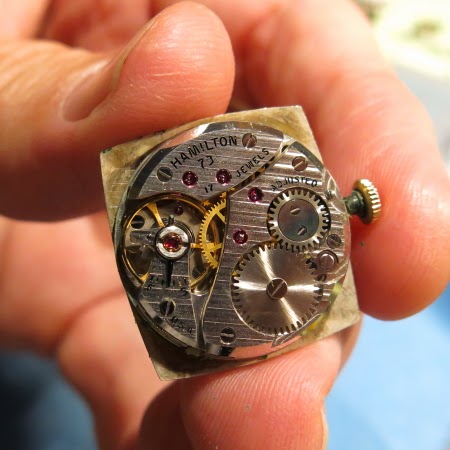 The stainless steel case back has an odd coating of verdigris all the way around it.  You don't tend to see stainless steel get this green.  That will clean off with some elbow grease and a half hour or so in the ultrasonic. 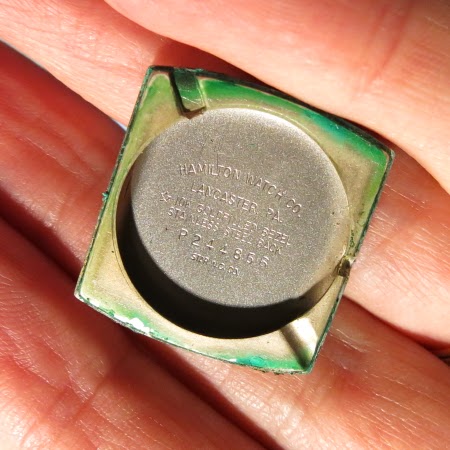 Here's a better shot of a Glucydur balance.  Notice the little holes on one side.  Those represent material removed in order to balance the wheel and put it in "poise" - which basically means perfectly  balanced with no side more heavier than the other.  On a compensation balance and the bi-metallic balance wheels used prior, the little screws where used to poise the watch and the position of the screws effected temperature compensation as well as beat rate. 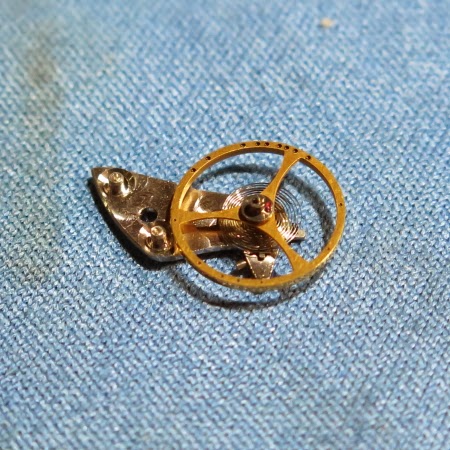 While everything is being cleaned in the ultrasonic, I will prep a new glass crystal for installation in the bezel - once the bezel de-funkified. 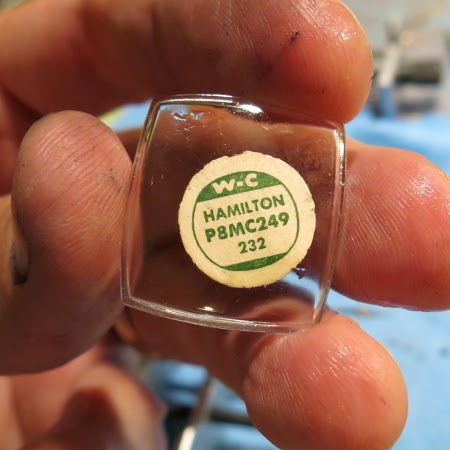 Everything is cleaned, dried and reassembled with fresh lubrication.  The now-running watch goes onto the timer.  It's running a little slow with decent amplitude but the beat error is a little high at 5.0 milliseconds.   Adjusting the beat error on a balance like this (with a fixed hairspring stud location) is very tricky but 5.0 is a little too high so I'll give it a go. 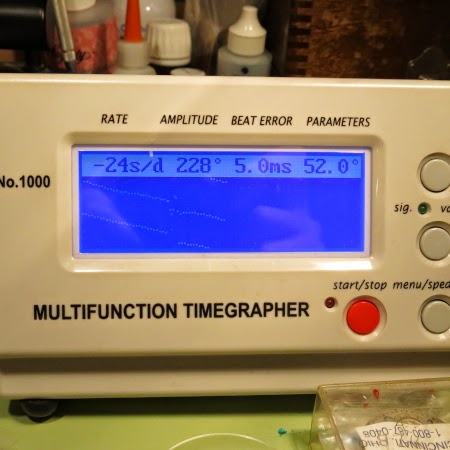 The beat error is how off-centered the impulse pin (jewel) is relative to the pallet fork.  It's represented by the distance between the two lines on the timer screen.  If the impulse pin was perfectly centered the error would be zero.  If it's not centered, the balance will swing further to one side than the other.  That will cause the watch to stop a little sooner than it would with a lower beat error. 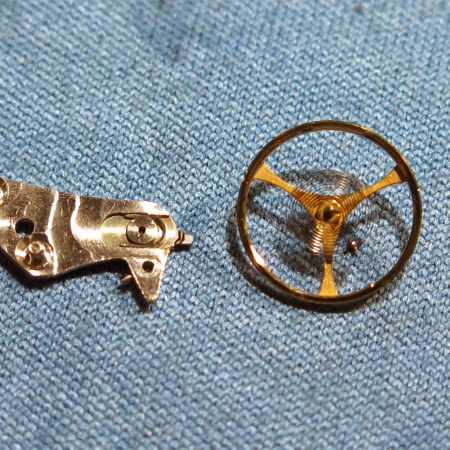 Monkeying around with a balance and hairspring is usually a recipe for disaster and it's not for the faint of heart.  As you can see below, I must have moved it the wrong direction, as the beat error has now increased to 7.8ms.  Oops!   Now I have to try again. 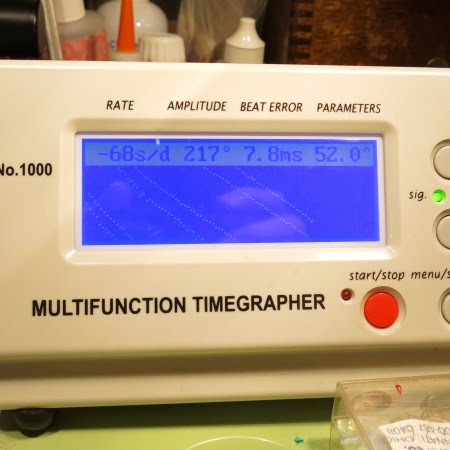 Alright - down to 2.0ms.  Now the watch is running a little more slowly but I can tweak the regulator and bring that in line. 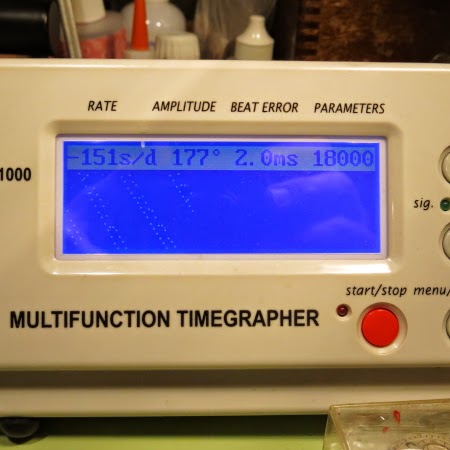 And finally everything levels out with a good beat rate, good amplitude and a good beat error.  Could the beat error be even better?  Sure - but I've learned (more than once) not to press my luck. 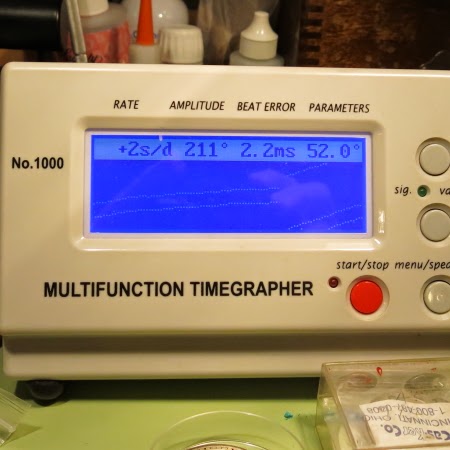 Here's a shot of the now-running and cleaned up movement, sparkling away as it should. 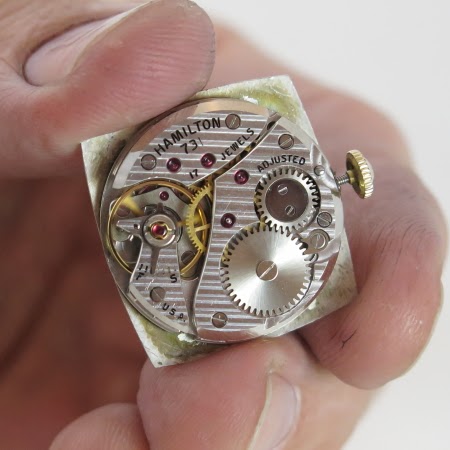 And here's the finished project watch with a new glass crystal and a new lizard strap.  The dial cleaned up pretty well but still has some age spots... but then again, so do I. 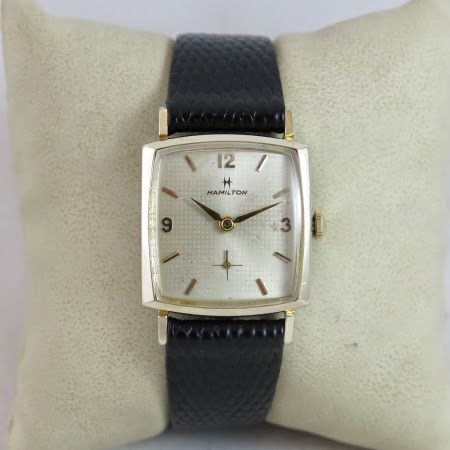