If you could only have one pocket watch, I think my suggestion would be the 23 jewel 950 or 950B railroad model. For over 50 years Hamilton was known as "the Watch of Railroad Accuracy" and the there was good reason for that.  Hamilton produced a number of different grades that met the requirements of railroad certification.  In fact, making railroad-approved watches was the principle reason the company was formed in 1892.

When it was introduced in 1910, it featured 23 extra-fine ruby and sapphire jewels.  It has a solid gold train - meaning the center wheel through the 4th wheel are solid gold.  The train jewels are set in solid gold chatons (settings).  It has a low friction motor barrel.  Plus is has all of the bells and whistles the "lesser" grades like the 992 had (the 992 is also an excellent railroad-approved watch). 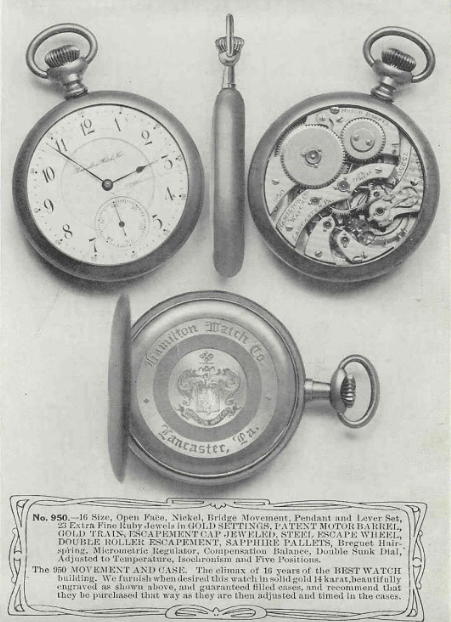 The 950 continued to be produced until the Elinvar hairspring was added in 1935, making it the 950E.  The grade was largely unchanged over almost 30 years until it was replaced by the 950B in 1941. 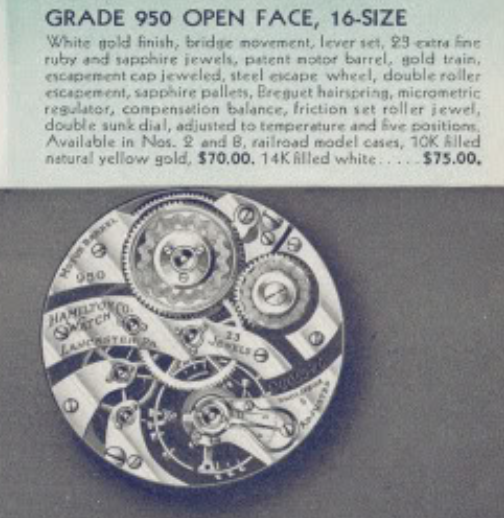 If you want to buy a 950 or 950B you'll need to be prepared to dig deep.  They are not inexpensive.  You will often see the grade cased in a solid gold case but buyers could also select a gold filled case, if they wanted.

I recently picked up a 950 and based on the serial number of the movement it dates to 1934, just before the Elinvar hairspring was introduced. 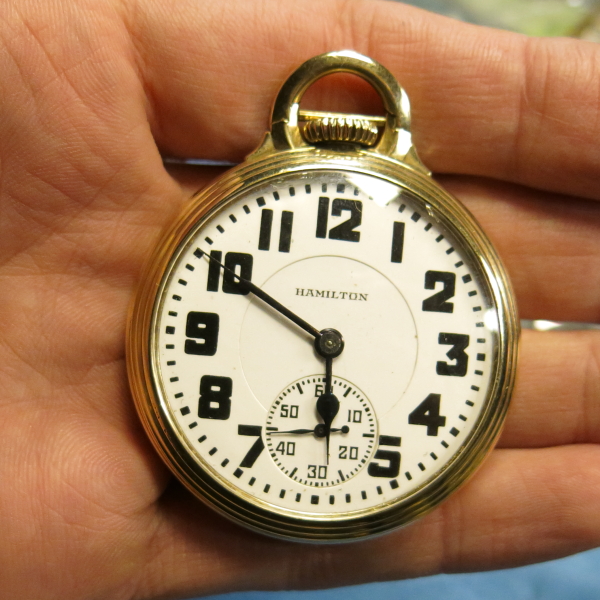 This example is cased in a Number 10 "bar over crown" case. 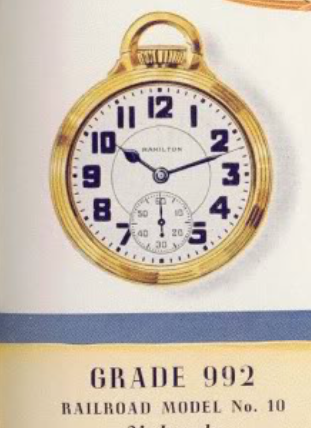 My attempt at the photographing the case back turned out to me more of a self-portrait of my hand and camera. 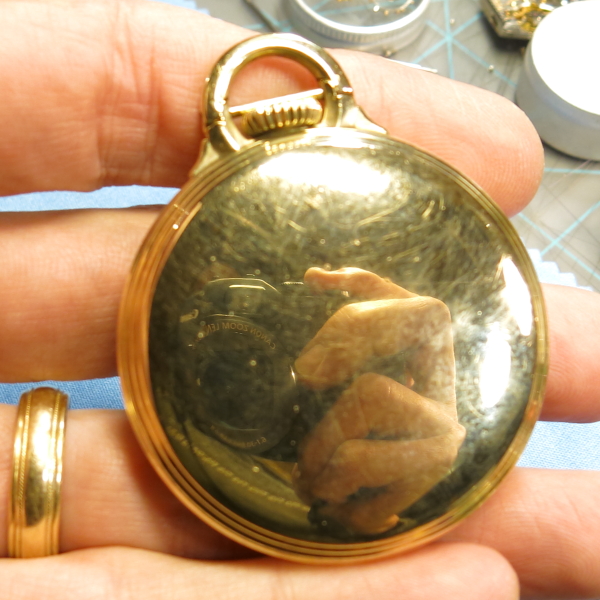 The best part of the 950 movement is the backside of the movement.  It seems a shame to have to cover it. 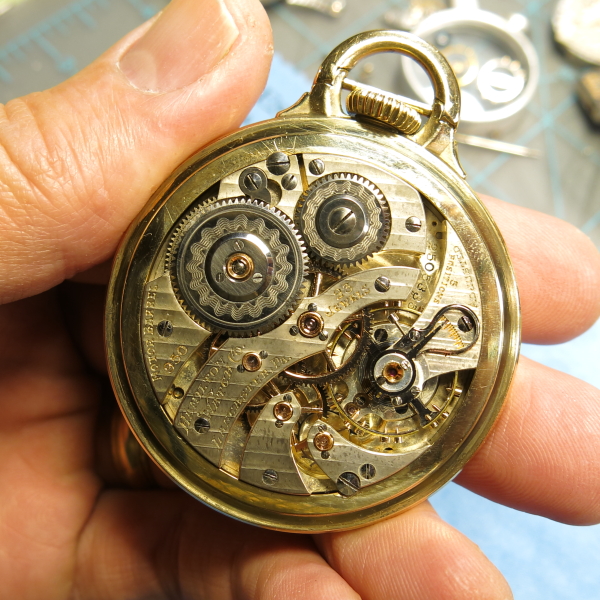 One of the requirements of railroad certification is to be lever-set.  That means there is a lever to move the watch into the time-setting position and you can't accidentally change the time like on a pendant-set movement. 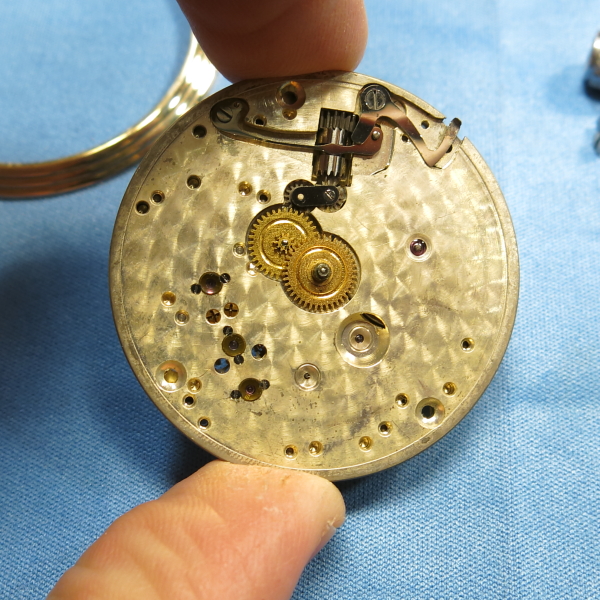 Flipping the movement over, the first thing to do is to make sure the mainspring is released.  Then each bridge is removed, screw by screw. 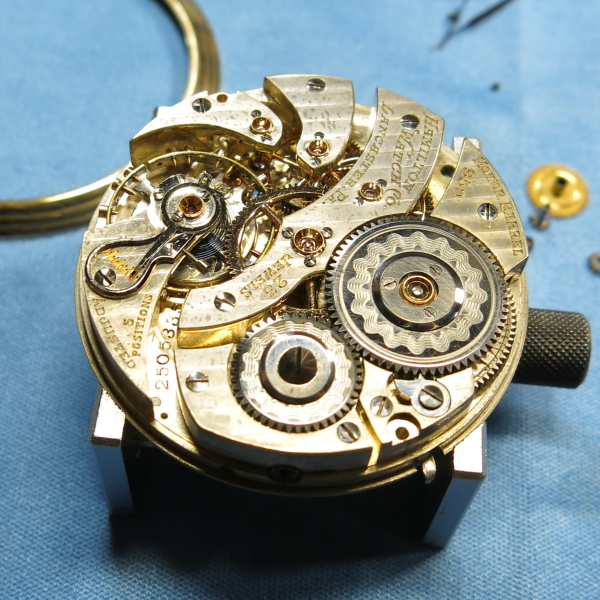 A motor barrel is an interesting design.  The barrel has a fixed axle that runs though the center.  The arbor that the mainspring attaches to is secured to the ratchet wheel and the axle goes through the arbor and is held in a jewel on the back of the movement. 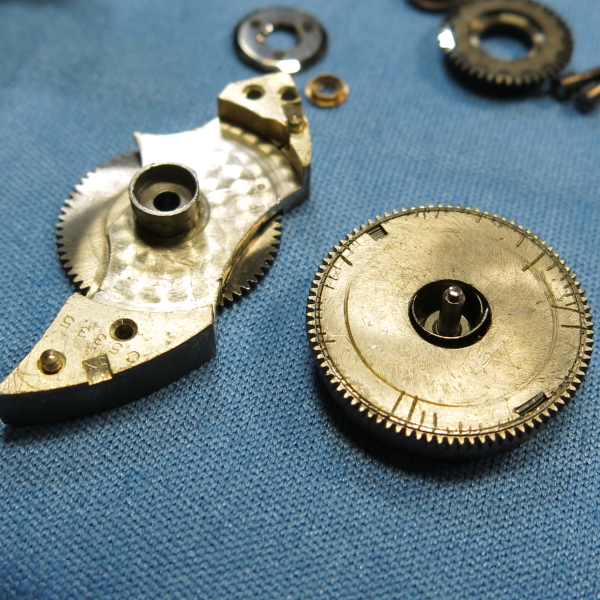 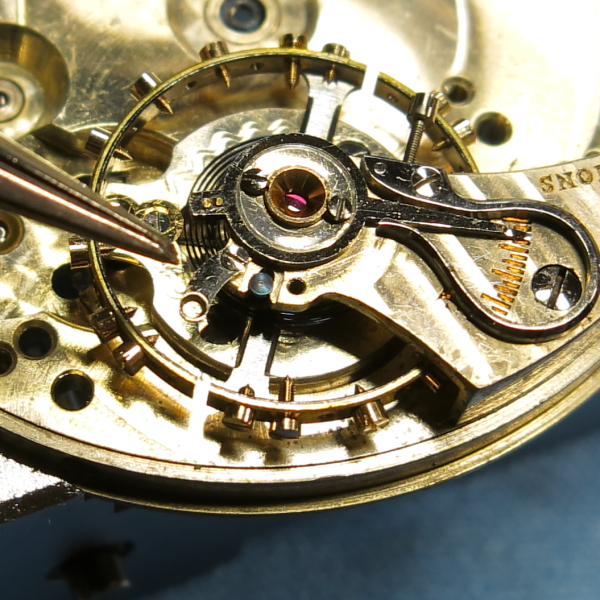 While the parts are being cleaned, I will replace the crystal in the bezel since it has a few edge chips. 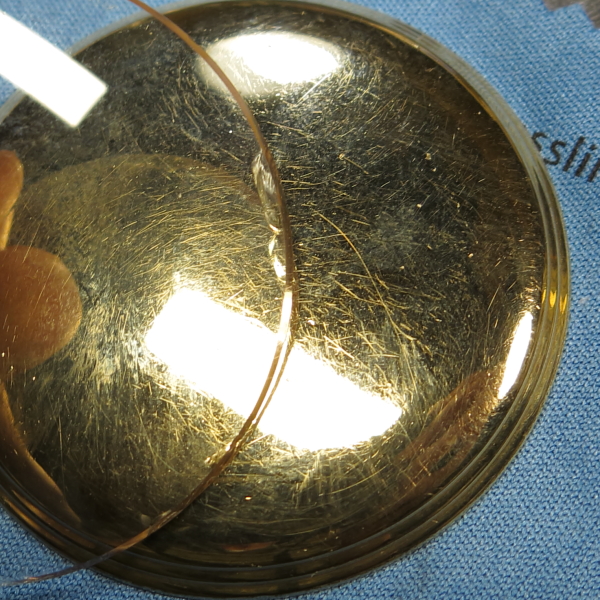 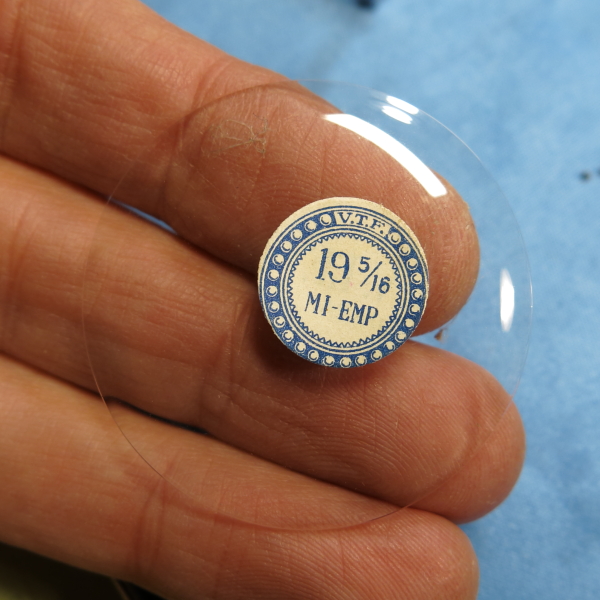 Everything gets thoroughly cleaned and readied for reassembly. 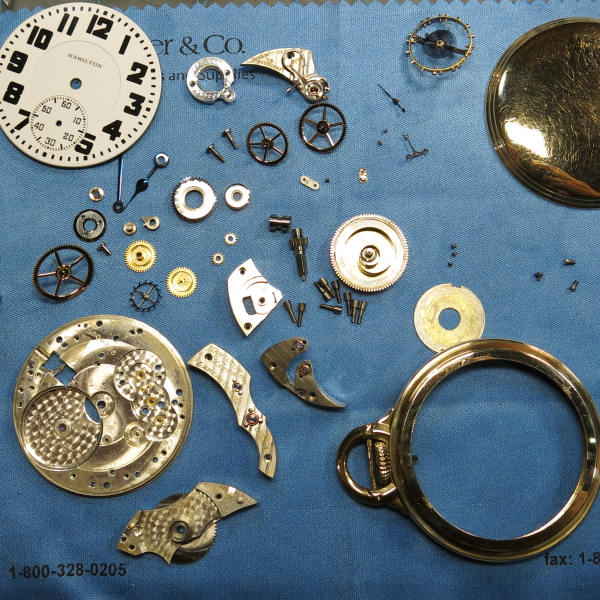 The four train wheels are installed first.  They should spin effortlessly at this point. 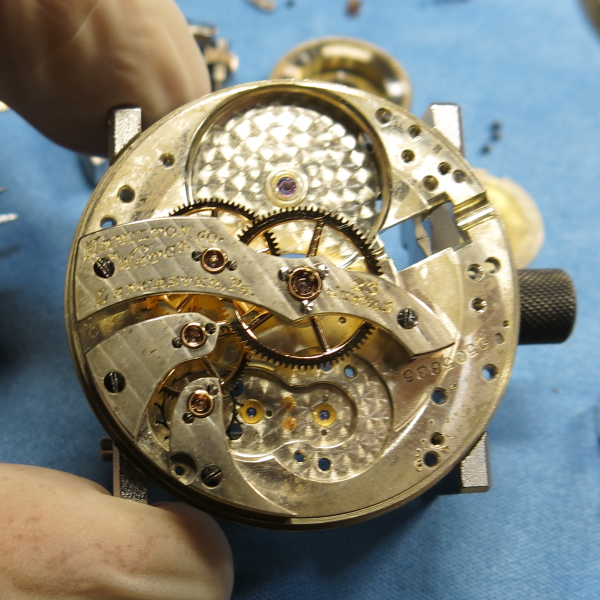 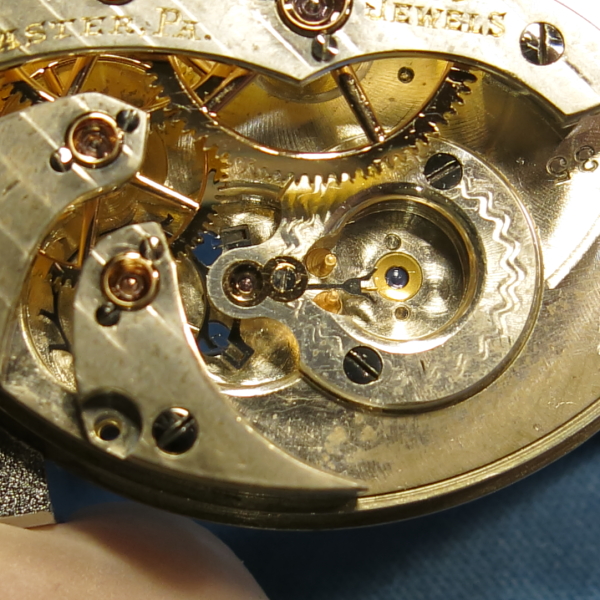 The barrel bridge is installed and the arbor jewel is secured by three screws. 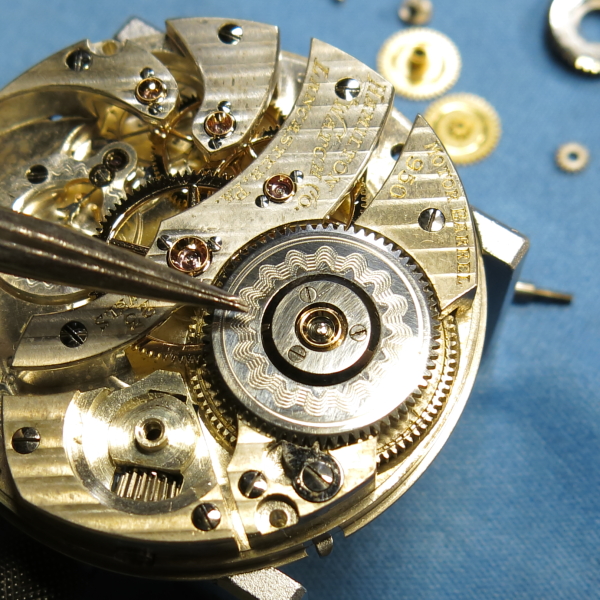 The movement is now ready to be wound up so I can put the balance back on. 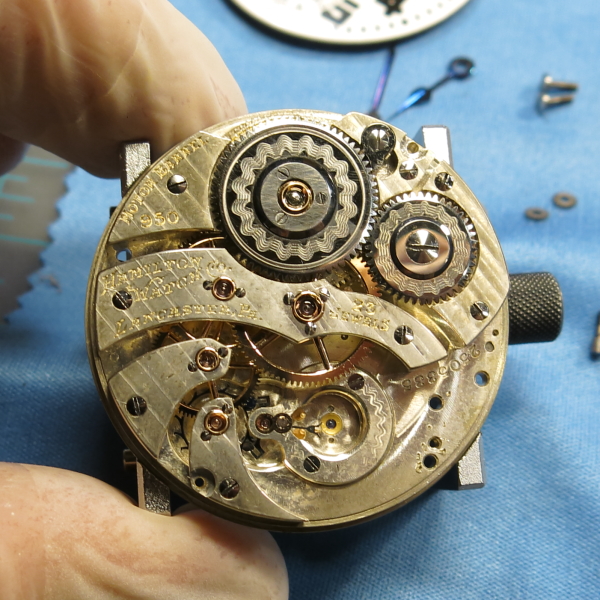 The easiest way to wind the watch at this point is to put it back in the case and use the crown. 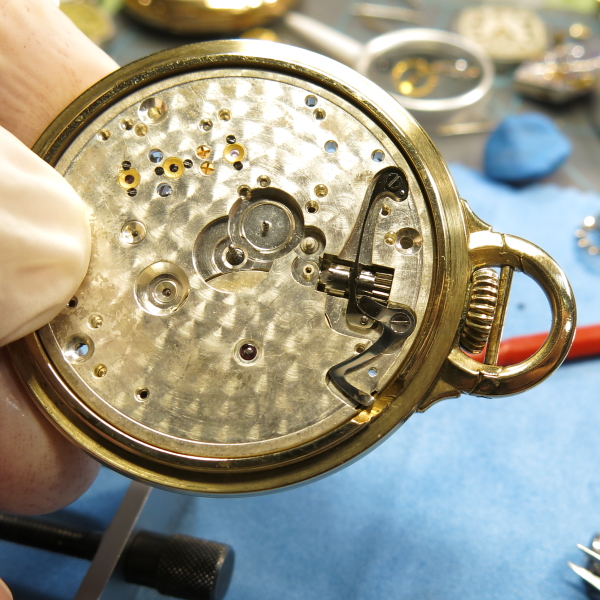 Reinstalling the balance means carefully reinserting the hairspring in the regulator index fork.  Then I can rescuer the keeper. 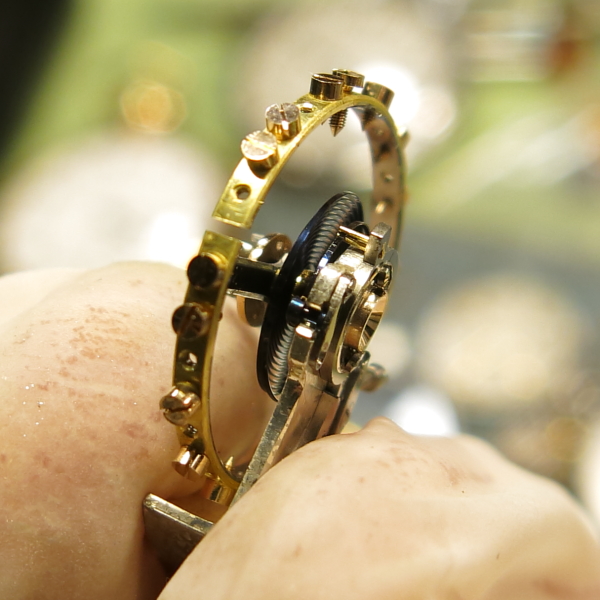 With the watch wound up, when I get the balance in the correct place the watch will start ticking.  It's looking great now so it's off to the timer. 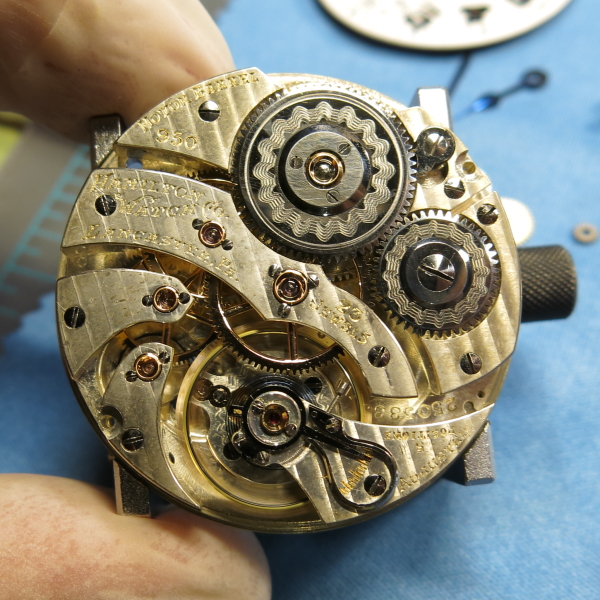 Not too shabby.  I could probably remove the balance and try to reduce the beat error but that would also risk goofing up the balance.  So I think I'll leave it as is. 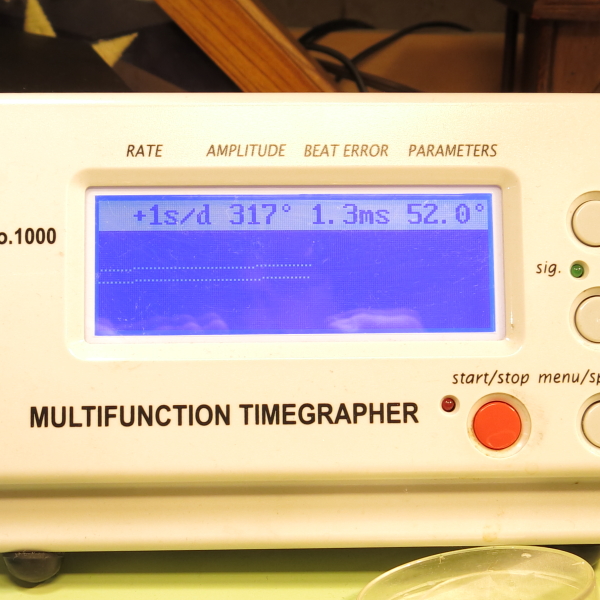 This watch looks as great as it runs.  This dial is called the HG dial. 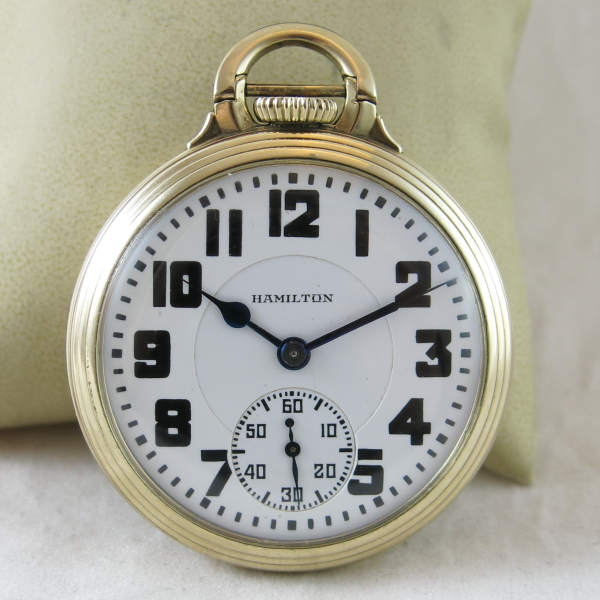 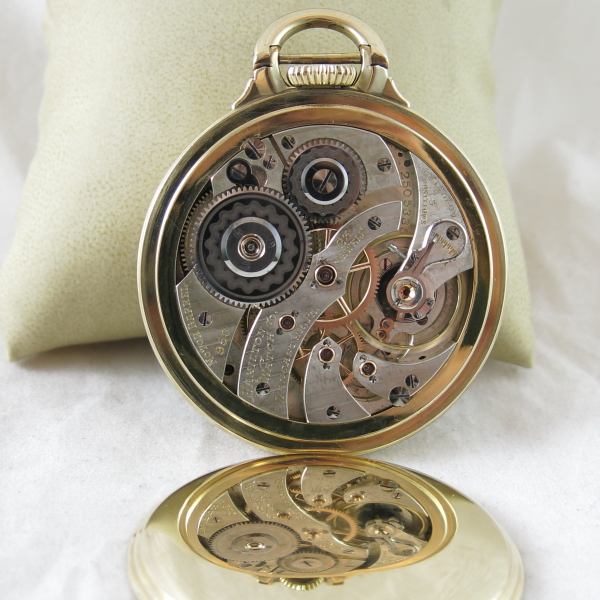