Someone asked me the other day what the 17 jewels were.  Generally speaking, when it comes to jeweling, "the more the better" - but it really only takes takes 15 jewels to "fully jewel" a watch.   However, I've found that different makers sometimes used jewels in different places - even though the counts were the same.

Hamilton marketed it's watches as having a minimum of 17 jewels.  Usually the higher end watches got movements with additional jewels.

The jewels are just that - usually rubies or similar stones that serve as very low friction bearing surfaces.

If you look at one of my overhaul threads you'll see them in the different movement shots.  Here's an inventory of each one used...

Getting back to the Reagan, the 10K gold filled case is often found with wear through to the corners of the bezel where the lugs join the case.  Sometimes an extra-thick crystal will protect the case from wear - but it's hard to find a Reagan without at least a little bit of wear through.

Two dial options were available... the AGN dial (most common) and a black enamel dial.  The AGN dial is an interesting textured design - common for this period of watch models.

Here's a shot of an enamel dialed Reagan I recently overhauled.  The case is surprisingly nice. 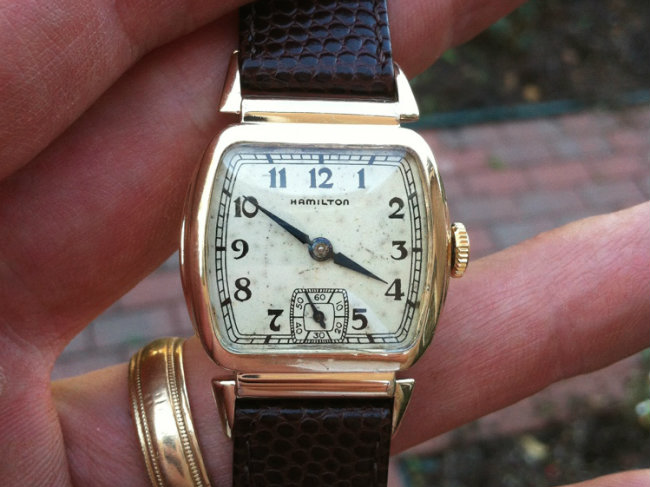 And here's an AGN version as well.  This dial is original and it had a dark spot in the center from years without a crystal.  I was afraid to clean it too much and risk losing the lettering.  It looks much better in person as the photo exaggerates the darkness. And just for comparison, here is shot of a 1937 Harris.  The similarities are obvious.  Although the Reagan is more square than the Harris's rectangular shape, to me the easiest way to spot the difference is to look at the seconds track.   The seconds track will usually emulate the crystal shape and as you can see the Reagan's seconds track is big enough to contain numbers while the Harris does not. 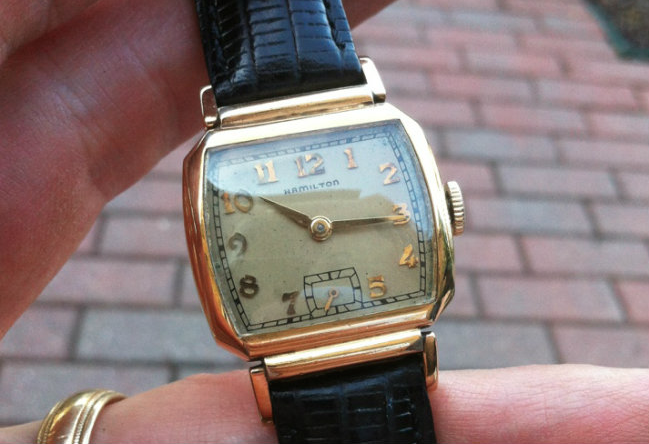