If you were to ask me what my favorite Hamilton watch is I would have a very difficult time giving you a firm answer.  It's easier to identify the ones I don't like more than the ones that I do.  For example, I'm not a big fan of the highly contoured 1950's models with pointed ridges and matching pointed bracelets.    I don't care much for the really tiny men's watches from the 1940's either.  To each their own, I say - but I find the watches that are of the most interest to me are from the 1930's.

Many of the watches from the 1930's used Hamilton's 6/0 size movements, the 17 jewel 987 or the 19 jewel 979.  These larger movements were often installed in larger cases - so the watches are usually a nice size, even if they are small by today's standards.  In addition, Hamilton typically offered multiple dial designs for the various models so the same model could take on a significantly different look depending upon the dial choice.

A great example of a sharp looking 1930's watch is the 1936 Morley.  It was only produced for two years.  If it looks familiar to you, it might be because it shares the same case with the 1941 Douglas.

The Morley came in a 10K gold filled case in yellow only.  Two dials were available, a black enamel numeral dial or an applied gold numeral dial with a wood-grain textured finish.

Behind the dial you will find a 987-E movement or a 987A with a very low serial number - since that was introduced in 1937.  Hamilton didn't distinguish between the various 987 movements.  They simply referred to them as 987 movements, even when the original 987 had long been discontinued.

As you might surmise, I recently received a Morley project watch.  It was in very nice shape - so nice you might have thought it was locked away for the last 75 years. 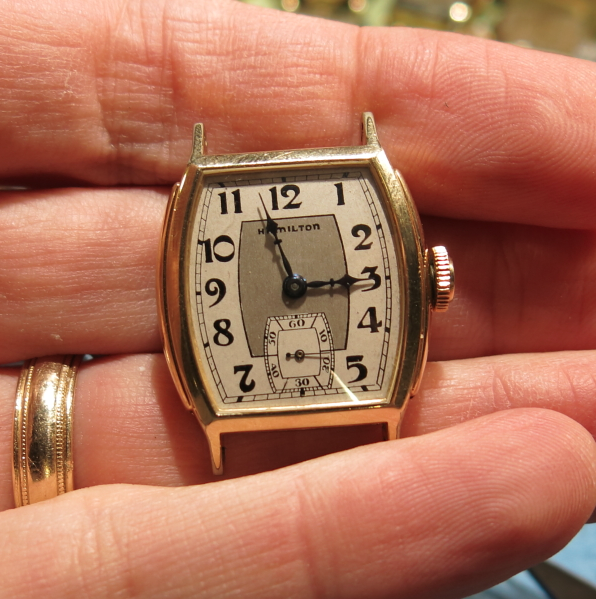 When you see a Morley "in the wild" you will almost always see it with wear-through to the lugs extending up to the corners of the crystal.  This example shows just a tiny bit of wear to the tips of the lugs - so this watch got some use but not much.  I bet it was for "special occasions". 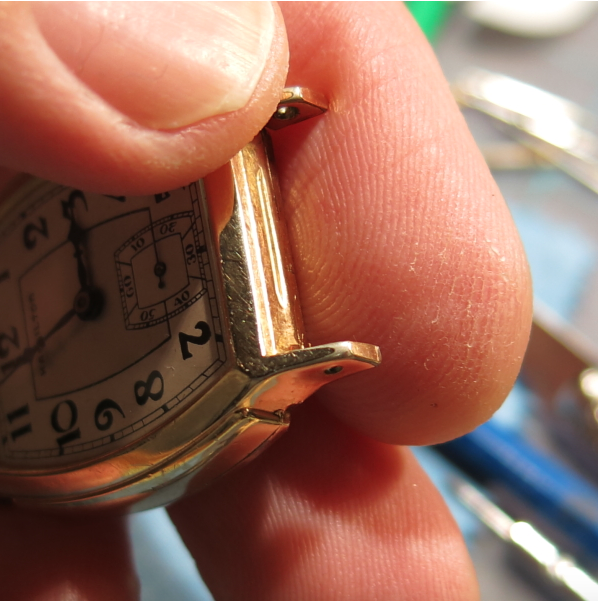 The dial looks really good… maybe a little too good to be 77 years old.  I suspect it's been refinished but they did an excellent job on the two-tone white & butler finish. 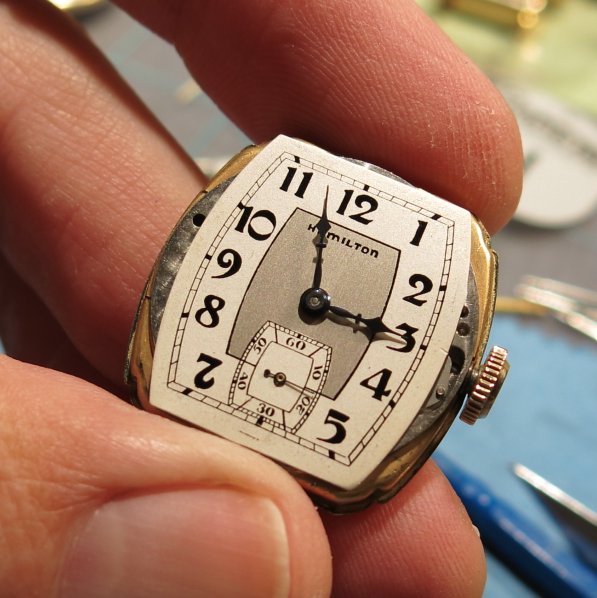 The 987-E is very similar to the 987-F with a few small differences.  Both movements have friction-fit jewels, that's where the 987-F got the F, as in Friction.  Plain 987 movements have jewels held in place with screws.

The 987-E was given a new monometalic balance with an Elinvar hairspring - that's where the 987-E got the E, as in Elinvar.  But the balance is slightly different too - as I'll point out below. 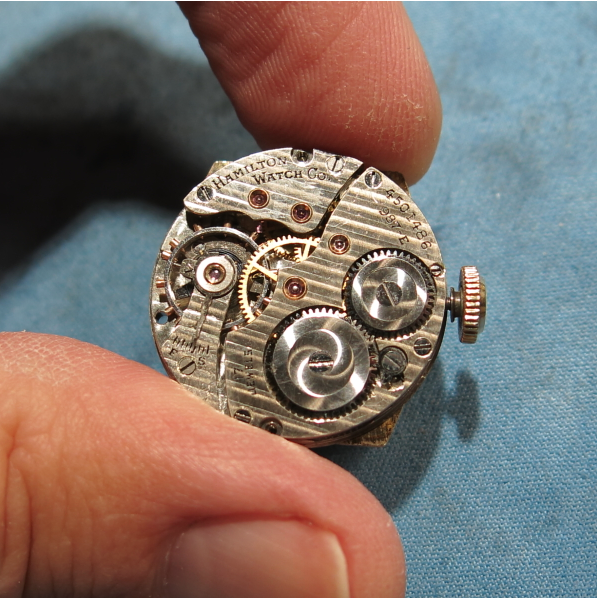 Sure enough, the back of the dial has some numbers scratched in - a sure sign of a refinish at some point. 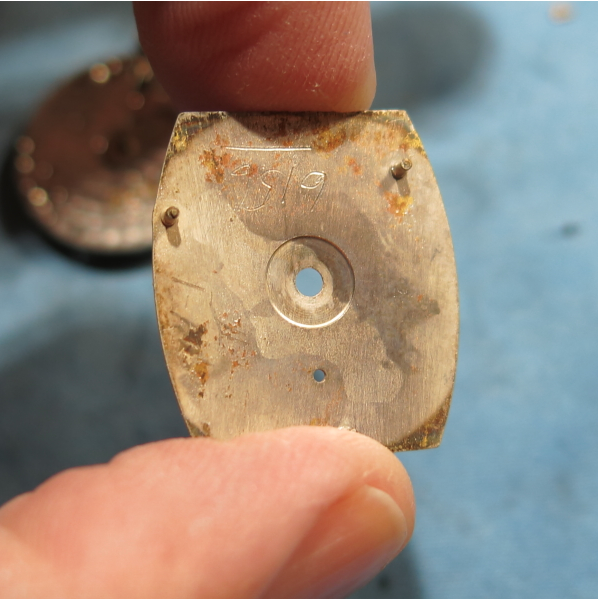 With the movement secured in the holder, the first things off are the hour wheel, cannon pinion, minute wheel and setting wheel. 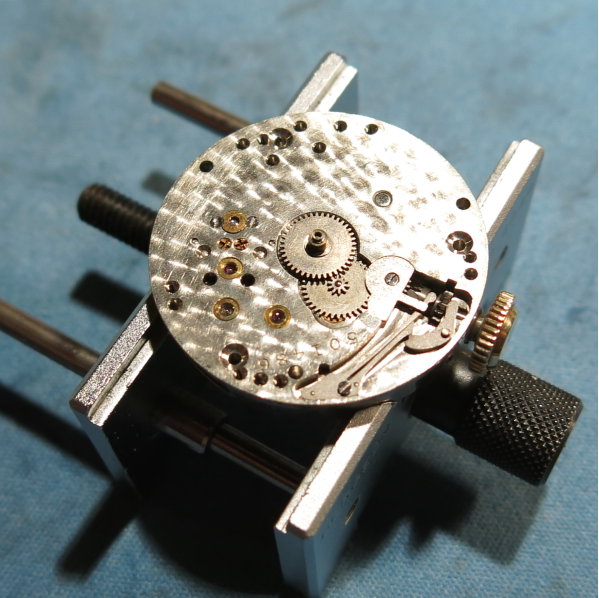 I leave the set lever spring in place and the stem, winding pinion and clutch will fall out once I disassemble the back. 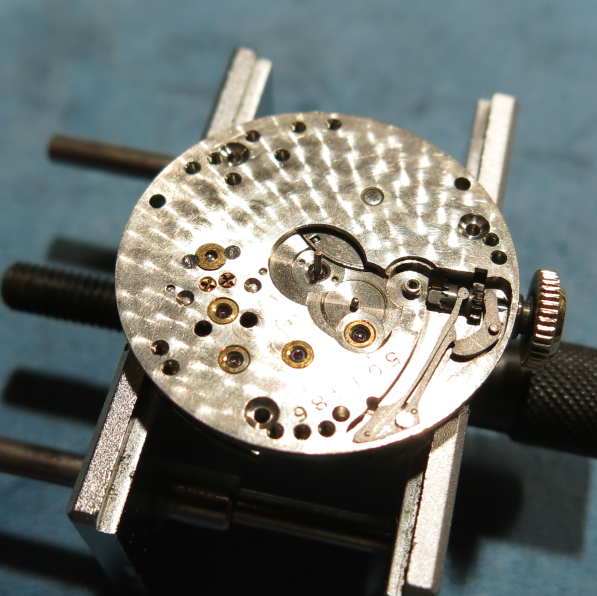 So, with no power remaining in the works, I'll remove the ratchet wheel and the smaller winding wheel next to it. 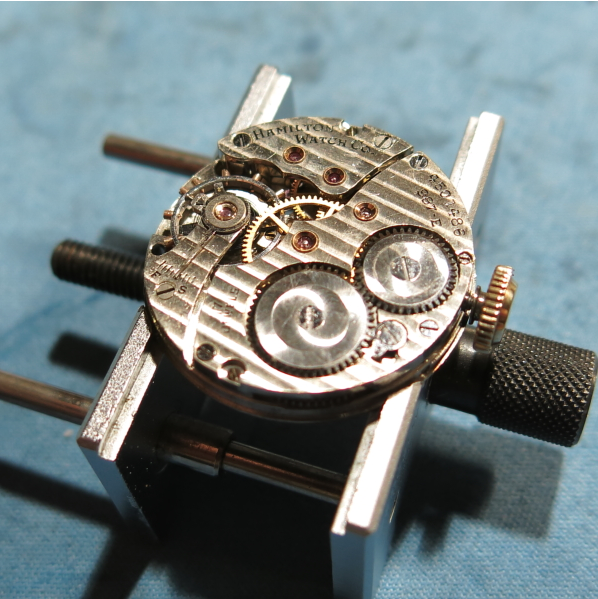 Now the five bridge screws can be pulled out and that will free the barrel bridge and train bridge for removal. 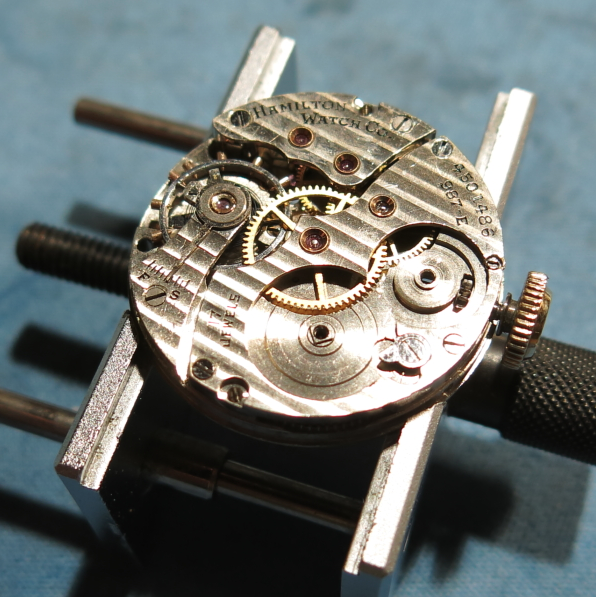 With the bridges out of the way you can see the gear train.  Starting from the bottom you have the mainspring barrel, then the center wheel (which drives the minute hand), then the third wheel, the fourth wheel (which drives the second hand), and finally, the steel escape wheel.  Power is transmitted through the gear train and held in place by the pallet fork.  When the balance wheel swings past the pallet fork, it moves it and allows the escape wheel to rotate just a single step - thus rationing the power out slowly, five times per second. 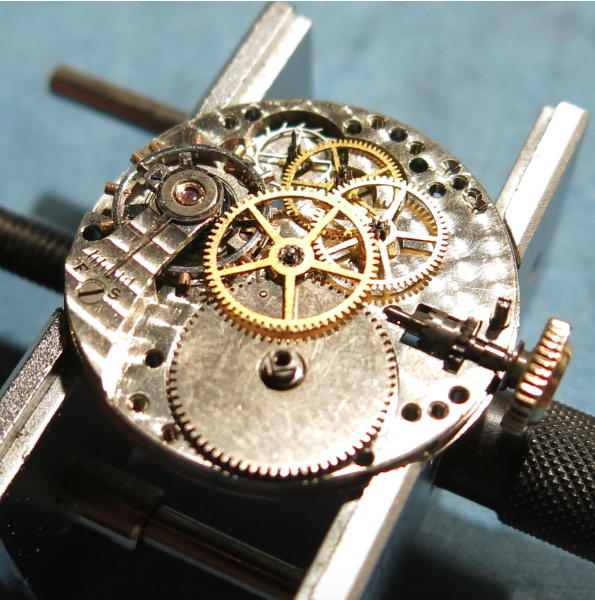 With the balance out of the way you can see the anchor shaped pallet fork tucked under it's bridge.  The two ruby jewels at the prongs of the fork are two of the 17 jewels in the watch.  There's a jewel holding each end of the arbor (axle) supporting the pallet fork, which brings you up to four jewels out of 17. 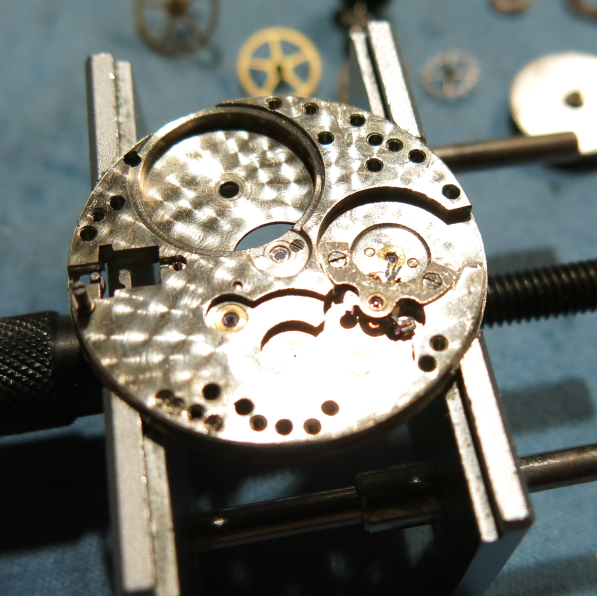 Everything is now stripped off the back of the watch. 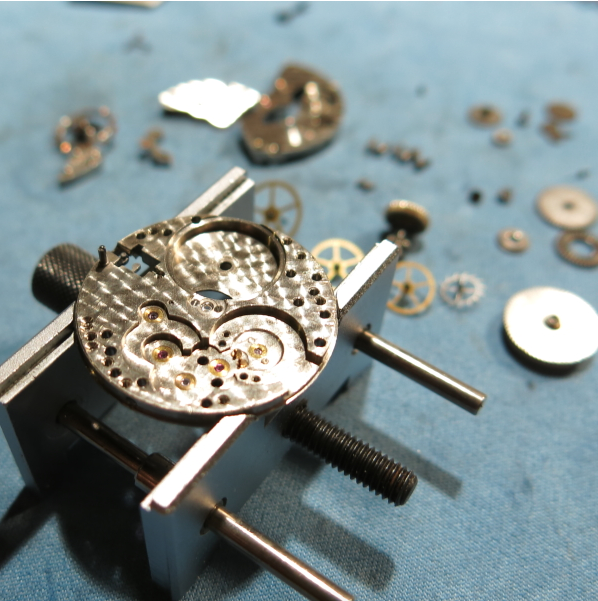 There's one last thing to remove, and thats the cap jewel that covers the upper balance jewel.  Two of the tiniest screws you've ever seen hold it in place. 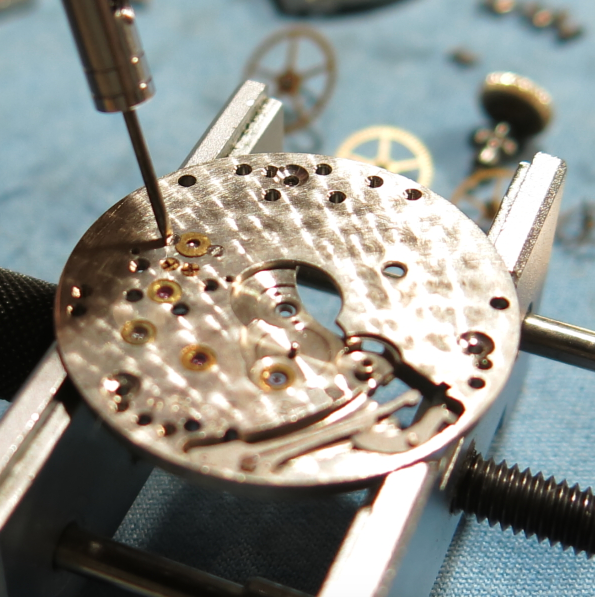 Well, there's no disputing that this watch needed a new mainspring.  It was "set" anyway and would have had to be replaced just the same. 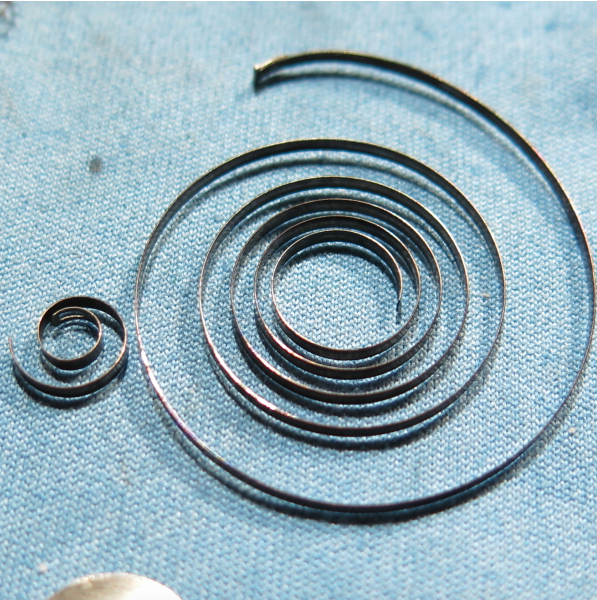 You can still find original blue steel Hamilton mainsprings but you need to be careful as any rust on them at all will cause them to break.  The best insurance is to get a white alloy mainspring - they're more expensive but they last a long time. 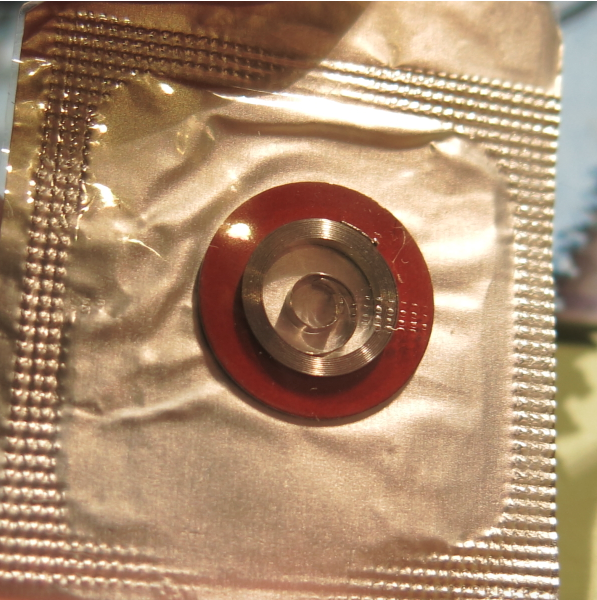 I have found that even though the spring comes pre-coiled, when it comes to installing it in a 987 barrel, there's a lip in the barrel that catches the spring and stops it from going in.  The 987A barrel works fine - but it's different than the 987, 987-F and -E barrel.

So I'll uncoil it and rewind it with my mainspring winder.  This tool makes it a breeze. 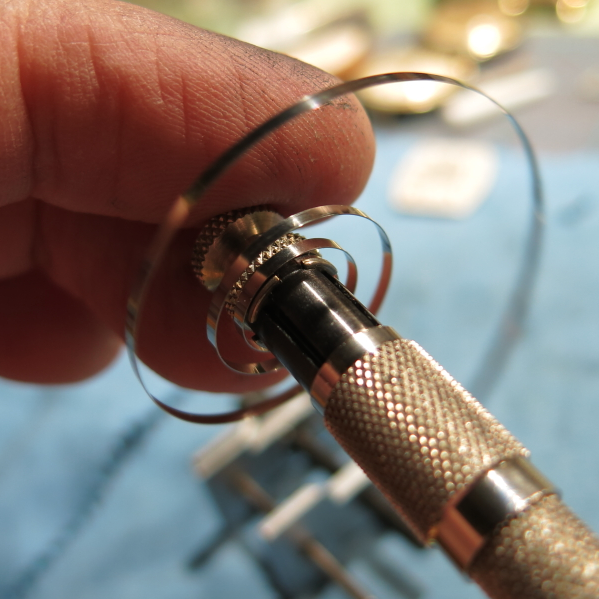 Here it is installed in the barrel, along with a piece of lint that I removed after taking the picture. 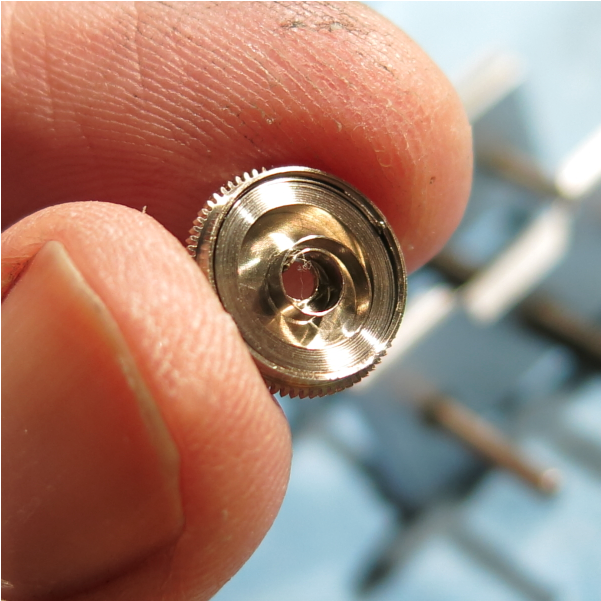 While everything is being cleaned, I turn my attention to polishing the case.  I use Simichrome polish and a super-soft buffing wheel. 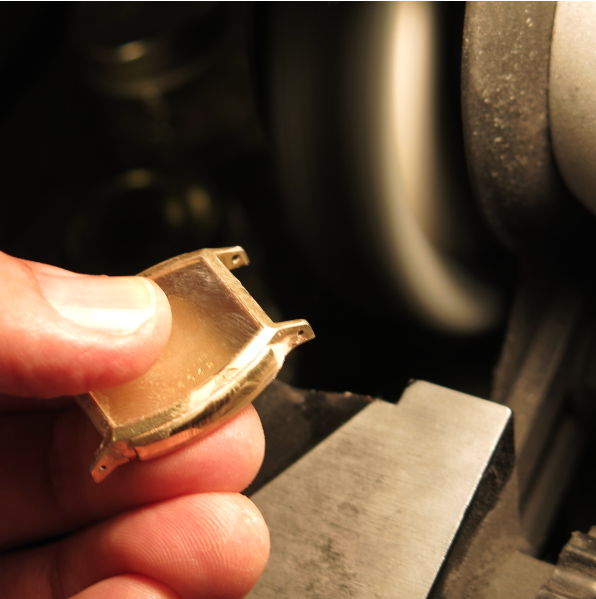 It sure polished up nicely. 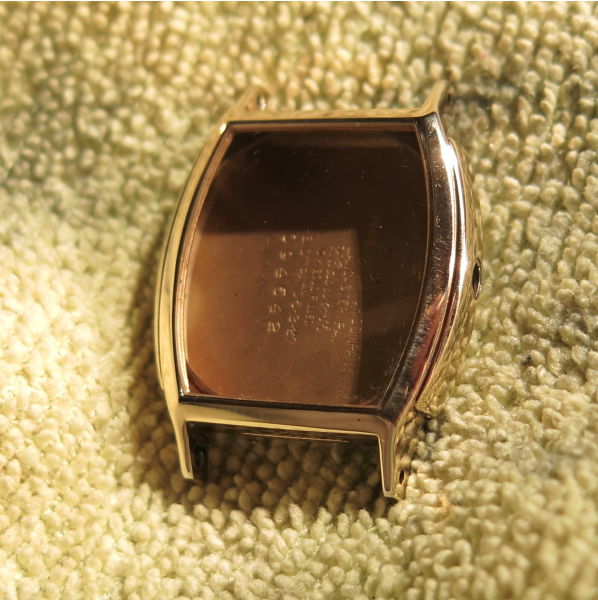 Here's the 987-E balance assembly on the left and a 987-F balance on the right.  They look pretty similar.  The 987-F balance is a "compensation" balance.  It is split in two places to allow the wheel to expand or contract slightly and compensate for changes in temperature.  This is sort of like how a figure skater puts their arms out or in to spin more slowly or faster.

The 987-E got the new "elinvar" hairspring and a mono-metallic solid balance wheel so the impact of temperature was controlled differently.  The 987A has the same balance assembly except the hair spring stud is shaped differently - so you can't swap them around unfortunately. 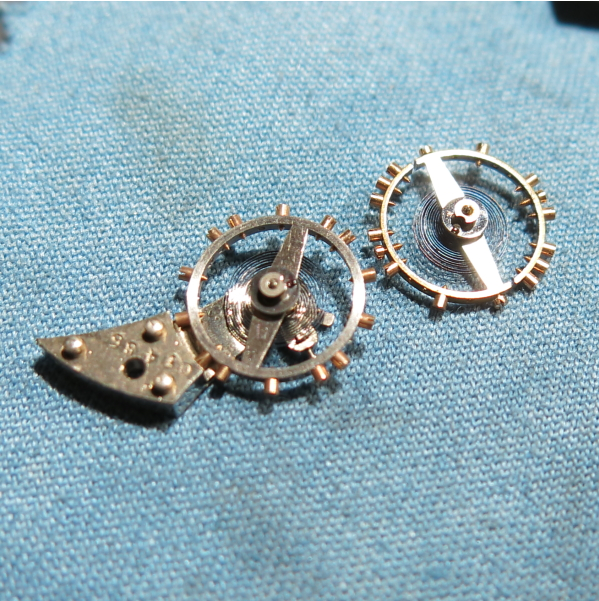 With everything cleaned and dried - re-assembly is basically the reverse of disassembly. 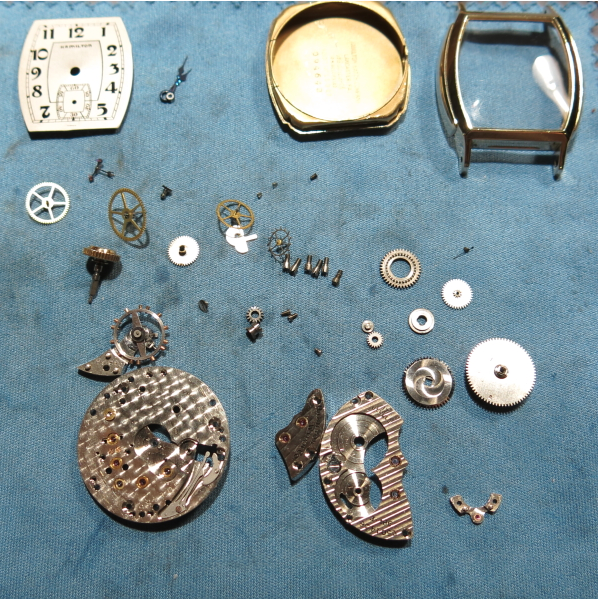 I had a really, really, hard time getting the watch to run right when I finished assembling it.  It would run fine dial up, dial down, crown up, crown down but it stopped at the 6-up position.  I fiddled with it for about two hours before tearing it down again and making sure the balance jewels were all seated correctly.  I was just about to throw in the towel when I gave it one last go - and it worked!  Yay!!!

So with the balance assembly reinstalled and the watch purring away nicely it goes onto the timer.  The beat error is a little higher than I would like but adjusting it is a real pain and a recipe for disaster - so it will have to do. 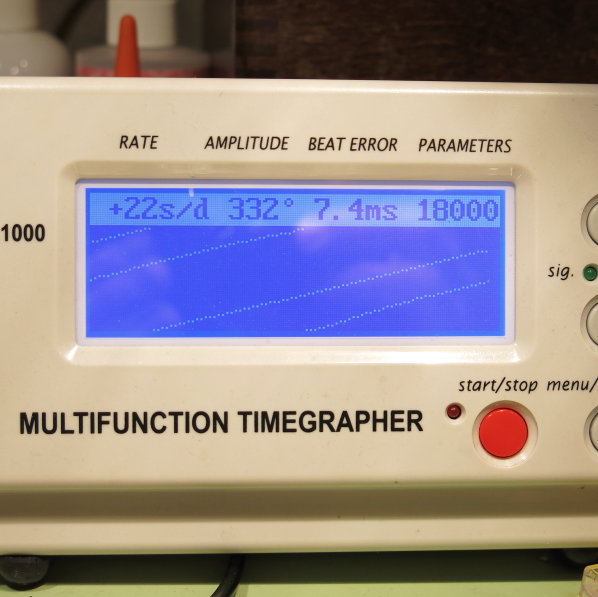 And here's the finished product, all polished up and on a fine black lizard strap.  It's a real beauty, I think. 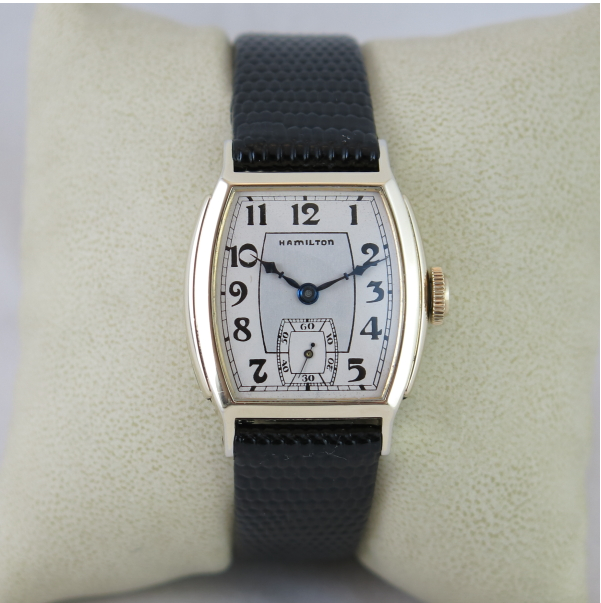 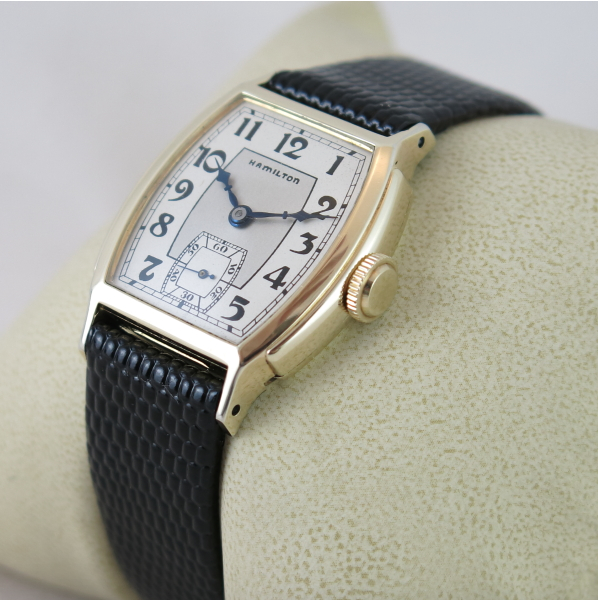