Automatic movements are self-winding movements that wind as you wear them.  You can also wind them manually by the crown, like a mechanical watch.  Some Swiss makers introduced automatics in the 1930's  but Hamilton didn't introduce them until 1954, when they added the 12 new models - including their first calendar watch too.

One of the 1954 watches was the Automatic K-300 CLD.  The CLD line was "sealed" with a series of gaskets around the various seams… bezel, crystal, crown, etc.  They weren't waterproof, just sealed from the environment in general.  The K-300 was only available for two years. 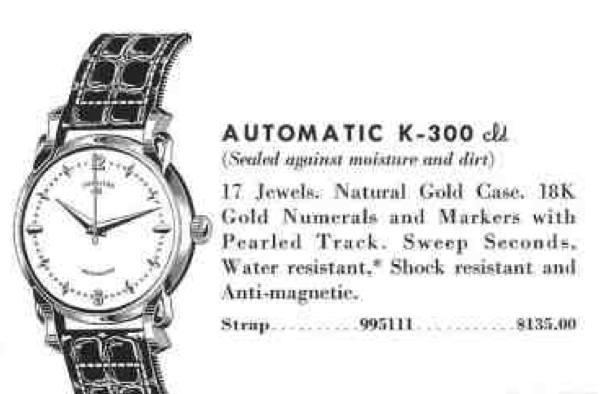 So with that in mind, you should know that the K-300 has a 10K solid gold case.  Like a lot of 1950's watches, the decorative lugs have a funky shape.  The silver dial features solid 18K numerals and markers with pearlised dots.

I recently purchased a K-300 but I had to return it.  I'll tell you why a little later.  As received it was in very nice shape but it had a smudge across the top of the dial.  I had hoped to be able to clean it off. 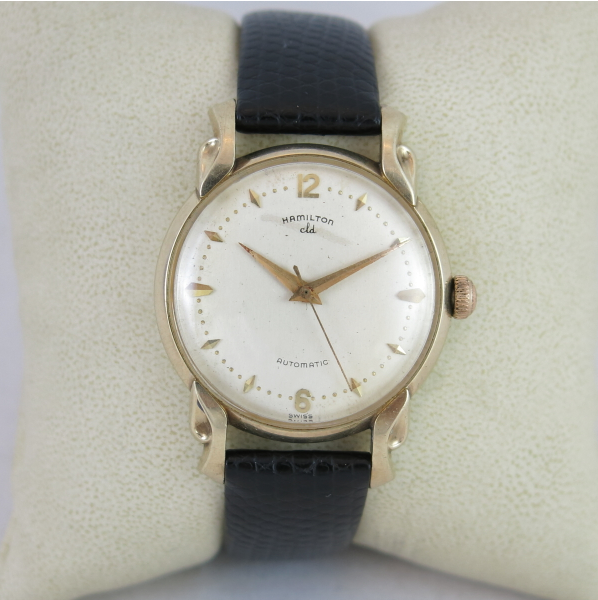 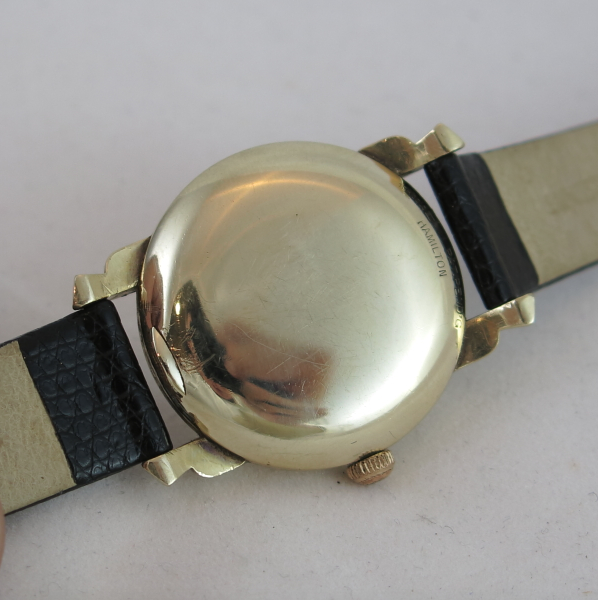 And here's the movement.  This is a very interesting movement.  In fact, it was only used in the first automatics.  There's no Hamilton number associated with it - it just says "Hamilton" on it.  I had to do quite a bit of research to figure out what it is. 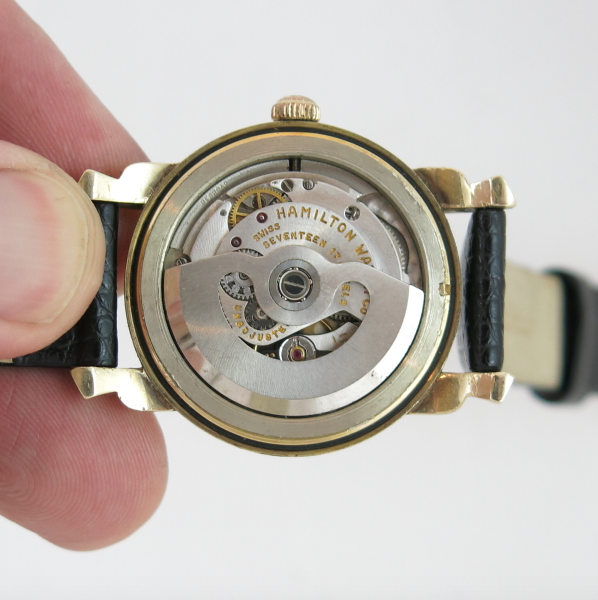 Eterna-matics are made by Eterna, a Swiss watch company.  They introduced automatics in the 1930's and their trademark is the 5 ball bearings in the center of the rotor.  You can see them in the photo above.  Those five ball bearings dramatically reduce the friction of the rotor and they became the logo of Eterna as well.  Eterna also introduced a subsidiary, ETA - which is the maker of Hamilton movements today.  Small world, huh?

So why did I return the watch?  Well, I couldn't get the movement out of the case!  It needed to be serviced but it would not budge for me.  Others had tried before me, you can see some pry marks on the movement ring near the lugs.  I was really bummed to return it but I was afraid I might damage it if I tried any harder to get it out.  Goofing up an Eterna-matic would be a costly mistake for sure.  Any other automatic, no problem - but try finding a loose Eterna-matic.

I suspect the gaskets around the movement ring must have hardened to the point they were a solid mass.    You'd probably have to dig the gaskets out with a pick to free them up… or maybe soak them with something.  Beats me.  Returning it was the best option.

Oddly enough, I know the person who bought it after me and I helped them send it to a professional watchmaker for service.  I'm really curious to see how it turned out because it's a very nice and uncommon model.

I also want to know how they got the movement out!

Turns out there's not much of a mystery.  Once the stem is removed the movement and movement ring come out the back with a little persuasion.  One option is to remove the crystal and push on the dial.
Posted by HandyDan at 5:45 PM