It's not unusual to see Hamilton watches with diamonds on the dial.  In fact, you will come across them for sale all the time but you need to be wary of them because they are often not authentic Hamilton models.  A great example of a common, non-authentic model is often described as a "Top Hat".   If you look on eBay at any given time for a "Hamilton Top Hat" you're sure to find one or two.

Diamond watches are often cased in white gold or platinum - or at least represented as such.  The backstory to them is that Hamilton movements were so highly regarded that jewelers would case loose movement in a "jewelers case".  Movements could be taken from older watches with worn out cases or, especially in ladies watches, the jeweler would buy a new gold filled watch, repurpose the movement and then scrap the case.

Hamilton hated the practice and tried very hard to discourage it as best it could but it continued nonetheless.

A common question is what's a watch like the "Hamilton Top Hat" worth?  It's true value is whatever the gold content is plus a value of a spare movement… so maybe $350- $450, depending on gold content, weight, etc.  In the end, the value is nowhere near the $2,600 you'll see them for sale.

But there are actually a good many authentic models with diamond dials and they are very collectible.  Many of them fall into the Lord Lancaster series, introduced in 1963.  Lord Lancasters come in all sorts of shapes and sizes, with electric, mechanical and automatic movements.  Cases can be solid gold, gold filled or rolled gold plate… you name it.  Many times they are white, but sometimes they were available in yellow too.

One of the white automatic models was the 1965 Lord Lancaster H.  It was produced through 1969. 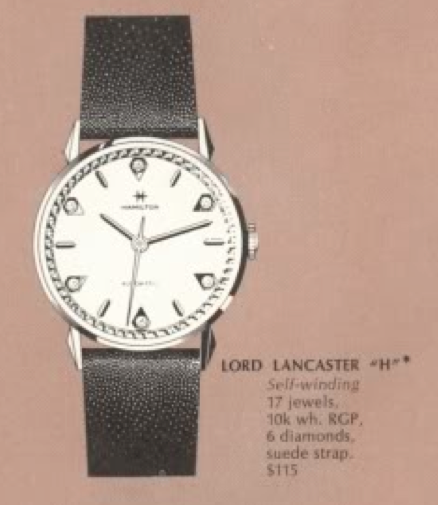 The Lord Lancaster H is outfitted with a 17 jewel 694A Swiss-made movement.  The watch has a fancy reflector ring inside the crystal to make the watch sparkle.  The diamonds are set in faceted hour markers.  So Lord Lancaster H offers a lot of "bling".

I had a Lord Lancaster H a while back and I sold it.  It's one of the few watches I have an occasional minor twinge of "sellers regret". 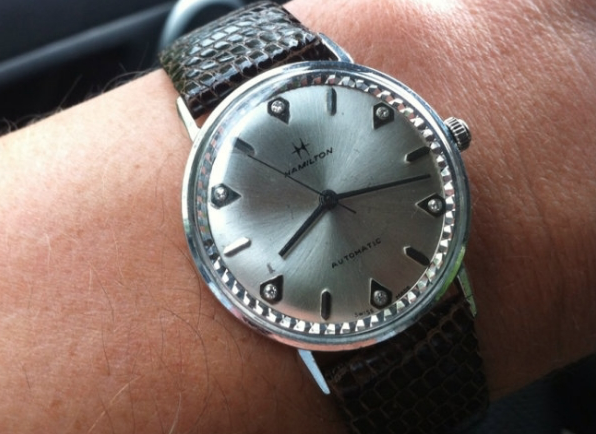 Perhaps I will find another someday….
Posted by HandyDan at 4:57 PM