I have often wondered what was behind Hamilton's affinity for nautical-themed model.  There are over 50 "Sea-somethings" alone but also a variety of others like the Skipjack, Surf and Nautilus.  In fact, there are 25 Electric Nautilus models too.  Hamilton even appeared to have some models named after American aircraft carriers from WWII - there's the Auto Date Escort, Auto Date Fletcher, Auto Enterprise, Auto Saratoga, Auto Yorktown!  Very odd, no?

You could assemble an impressive collection by just focusing on nautical themed models.  One of the watches you'd need to find is the 1965 Sea Beach II.  I was made for three years. 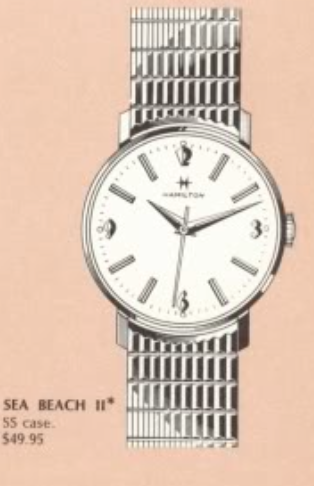 The Sea Beach II comes in a one-piece stainless steel case that opens through the crystal.  The dial only came in white with matching silver-colored markers and luminous dauphine hands.

Behind the dial you will find a Hamilton 686 movement.  This 17 jewel grade was made by the Swiss ébauche maker, ETA.  An ébauche is a partially completed movement.  As such, ébauche-makers sold partial movements to other companies to complete as they saw fit, with their logos, etc.  So you will find most of Hamilton's Swiss-made movements are in other brands watches too - which is helpful to know if you're looking for a special part.

My recent Sea Beach II acquisition arrived in running condition - but I couldn't wind it.  Turning the crown moved the hands, regardless of whether the stem was pulled out or pushed in.  So something was obvious out of whack in the keyless works.  It could also stand a new crystal, I think. 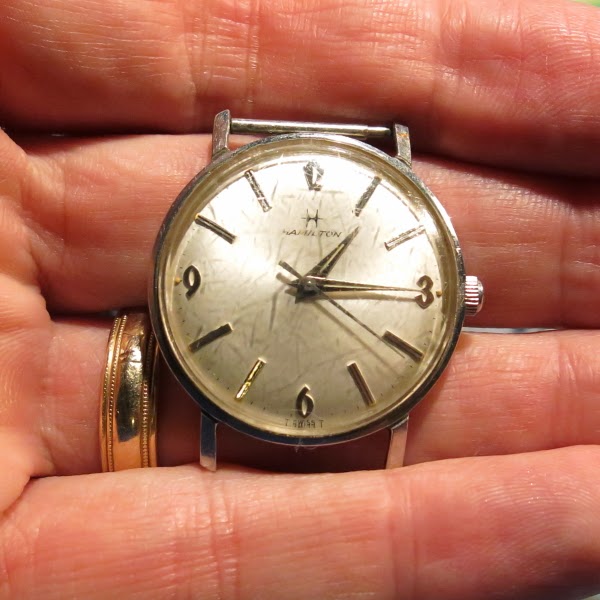 With the crystal out of the way, you can see the dial and hands are in fantastic condition.  If you look closely, you can see "T SWISS T" printed at the base of the dial.  This means that the watch is Swiss-made and uses a small amount of tritium for the luminous material on the hands and dial. 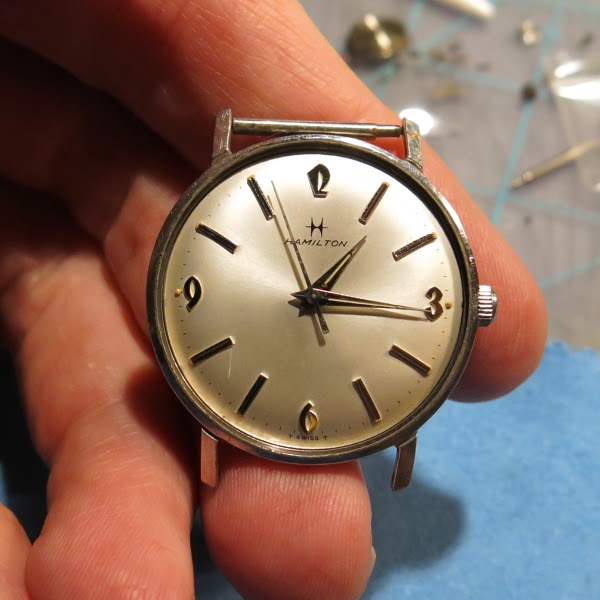 To remove the dial and movement, you need to align the two-piece stem so that the joint is clearly visible. 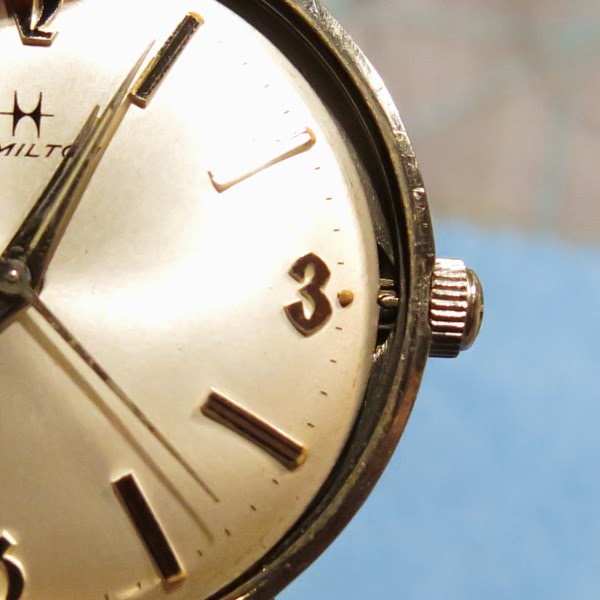 Then, the movement can be swung out of the case and separated once it arches about 45 degrees. 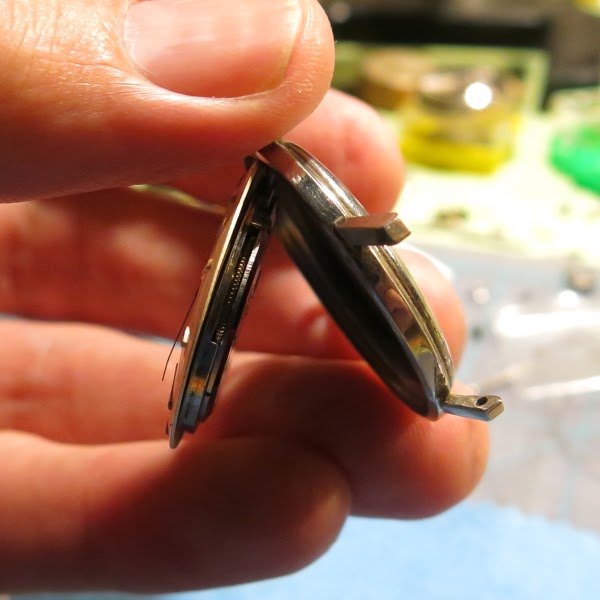 The 686 is fairly clean looking and it does run so all I need to do before overhauling it is figure out why the watch doesn't go into winding mode. 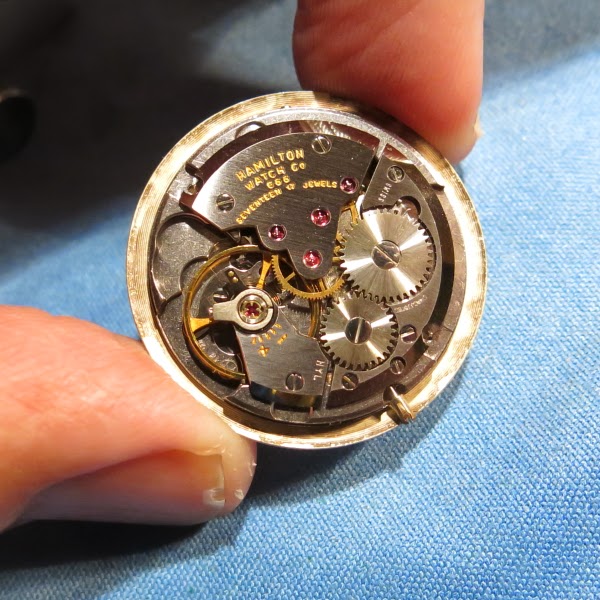 With the dial out of the way, I expected to see the "set bridge", aka, "set yoke" would be broken.  My tweezers are pointing to it and it's intact.  I can see though, that the set lever just to the right of the set bridge looks to be a little loose.  The set lever is what holds the stem in place and when the stem is pulled out it moves the various parts that engage the clutch wheel - and put the watch in setting position.  Anyway, all I had to do to fix the winding issue is tighten the set lever screw and draw the set lever down to the stem. 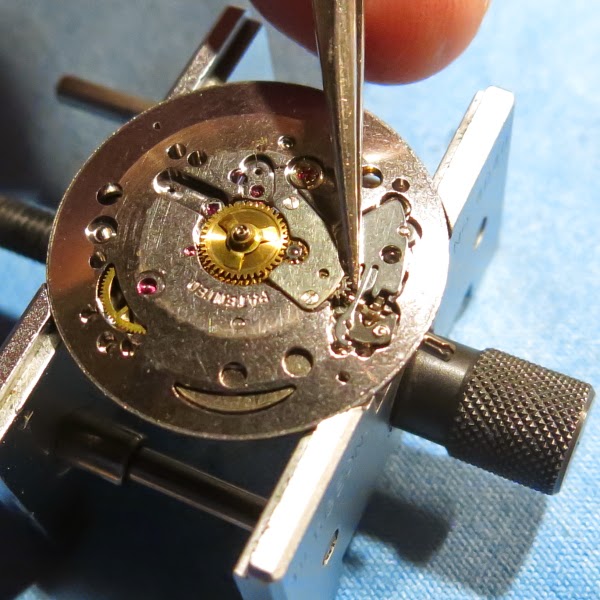 The newly cleaned movement looks a little brighter than before, but not too much different.  But I know there's fresh oil inside - and that's important for mechanical watches.  Watches will run without oil but they will wear themselves out.  That's why it's important to service mechanical watches every 4-5 years. 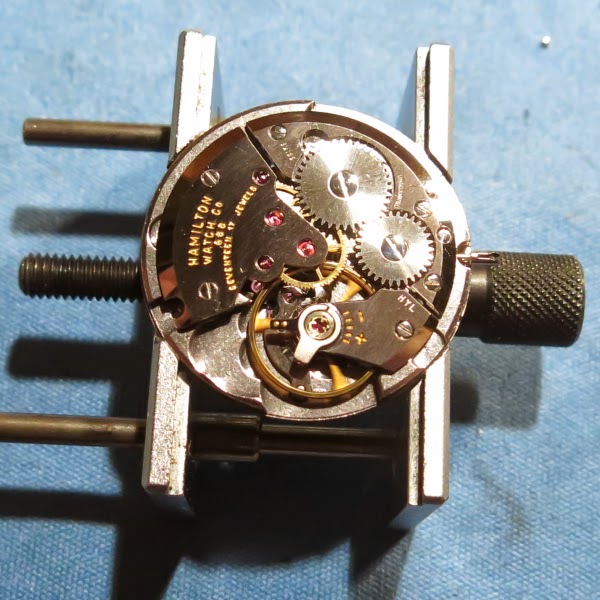 The watch started out running just a smidge slow but a little tweaking to the regulator brought it right in line. 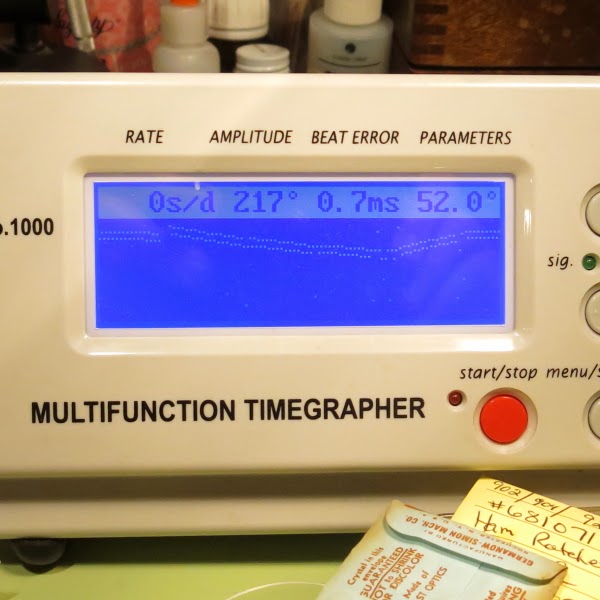 A new crystal and a black lizard strap completes the restoration process.  This watch looks almost good as new now and it runs as well as it looks. 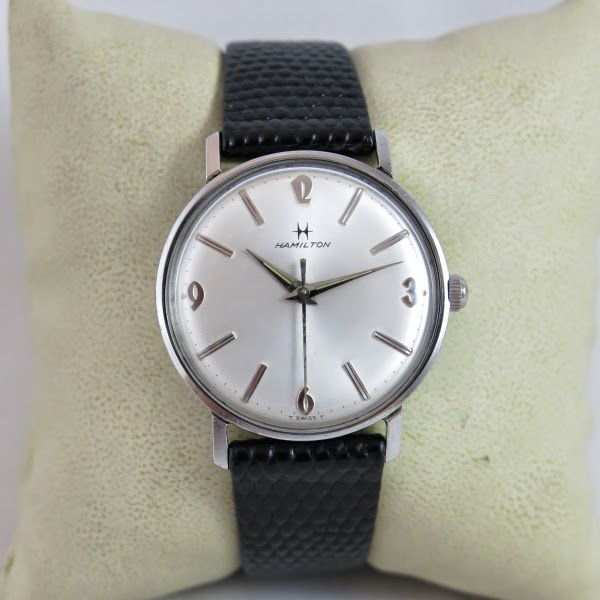